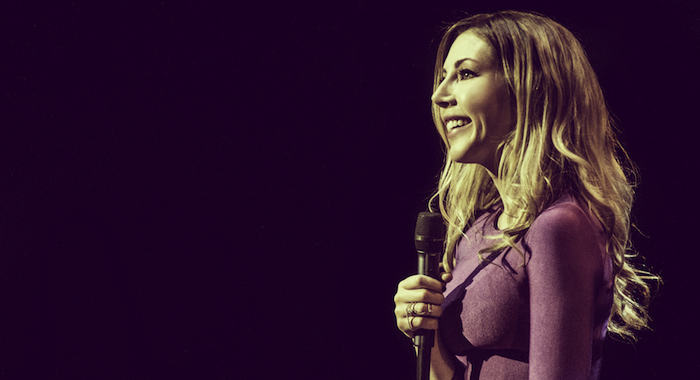 The best comedy is based on truth, and comedians like Louis C.K. and Patton Oswalt regularly turn their lives into humor for the enjoyment of their fans. So does Katherine Ryan – a Canadian comic based in England – in her Netflix special, Katherine Ryan: In Trouble.

Ryan began performing at open mic nights in Sarnia, Ontario and around Canada. She moved to London in 2008 where she’s been a fixture on British panel shows and comedy clubs. In Trouble showcases Ryan talking about her love life, her family (including her sister Kerrie and daughter Violet), and the celebrities with whom she’s obsessed.

In a phone call with Rotten Tomatoes, she spoke about nine topics she covers in In Trouble, offering specific insights into her brand of comedy.

@NICKIMINAJ If I win, please come up with me!! You're invited to any stage I'm ever on.

Ryan talks a lot about Taylor Swift  because Taylor Swift is pretty much perfect. The only dirt she could dig up on Swift was the time she sent a misguided tweet to Nicki Minaj, who had criticized the VMAs for nominating videos with slim bodied dancers. Swift replied with the tweet above.

“It did not strike me immediately as material for a joke,” Ryan said. “Nothing ever does, but it did strike something within me and with a lot of people who pointed it out as very patronizing. I’m sure Taylor Swift tweeted that from a place of friendship and inclusion, but it came off as very patronizing. Anything that I’m passionate about and surprises me usually ends up turning into a joke simply because I have questions about it and I’m curious and I want to talk about it.”

Swift and Minaj made up, and Ryan wants viewers to know she does a whole slew of material on how great Swift is. “When I talk about celebrities, it’s not a dismantling of that human being,” Ryan said. “I did say afterwards, ‘She’s young. I’m sure that we’ve all made those same oversights and same mistakes.’ That’s why I think it’s so provocative to talk about. It’s about the greater theme. I think celebrity is almost a religion at this stage, with the Kardashians as big as they are, and now look, a reality show celebrity is President of the United States in your country. I’m not going after Taylor Swift the human being. I love Taylor Swift. I always have and I think she’s wildly talented.” 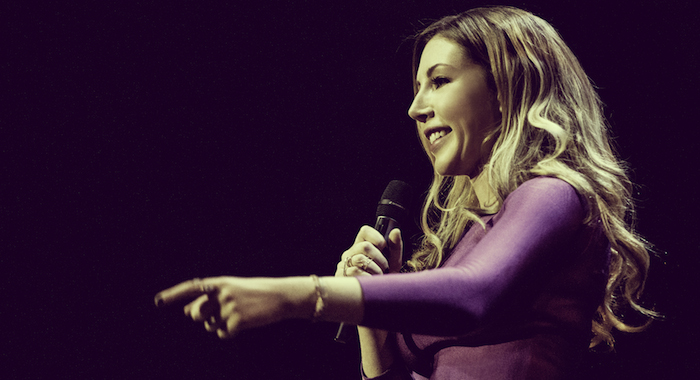 Another celebrity who’s not off limits is Lena Dunham. Part of the Swift routine is about her friendship with Dunham, who seems to serve as Swift’s one mortal friend. Ryan said she hopes this special gets on Dunham’s radar.

“I love Lena Dunham,” Ryan said. “I love, love, love her. Until now I’ve only worked in Britain, and she has no idea what I do or who I am. I think she’s such an important part of culture and I want to be her best friend. She’s my favorite.” 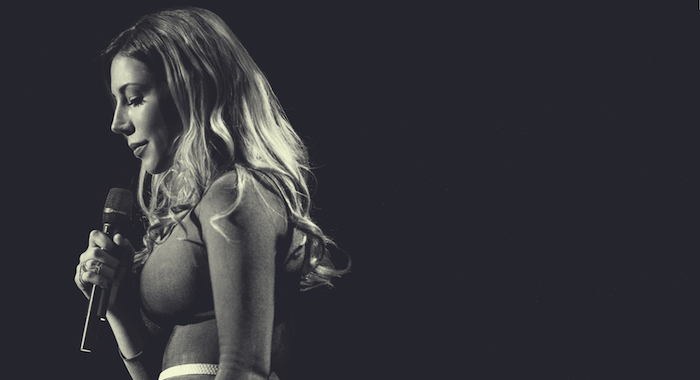 Dating woes are fertile ground for most comics, and Ryan is no exception. She recounts one relationship where she dated a Jewish man who saw their religious differences as a problem. This turned into a conversation about circumcision and dick jokes about their hypothetical child.

“I think some serious bits need a dick joke sometimes,” Ryan said. “For me, there’s an element of quite provocative self-discovery in that. As a very privileged, Canadian, lower middle-class white person, I had never experienced my culture or my background being, as I’ve interpreted it, not suitable for someone else. That’s the joke in there. It’s the first time this privileged young woman is like, ‘Hey, wait a minute, what about me?’ And then I thought that needed a dick joke, yes, upon reflection.”

4. ASKING BILL COSBY ABOUT HIS ACCUSATIONS 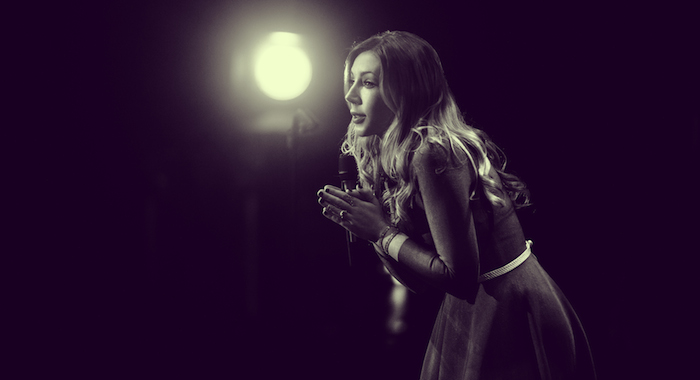 The accusations of rape leveled against Bill Cosby have rallied the comedy world behind his victims. Many comedians, including Judd Apatow, have spoken out against Cosby. Ryan’s take is that it’s quite telling how much Cosby really hates being asked about it. Ask anyone else if they’ve raped anyone and they’ll casually say no (and she does ask audience members).

“That whole theme is not isolated to the Bill Cosby incident, though that was a big news story,” Ryan said. “It is quite affronting to be asked if you did something like that. I think that’s why I included that in the special. It is the worst thing in the world to be accused of.”

5. COULD FEMALE COMICS GET AWAY WITH WHAT BILL COSBY DID? 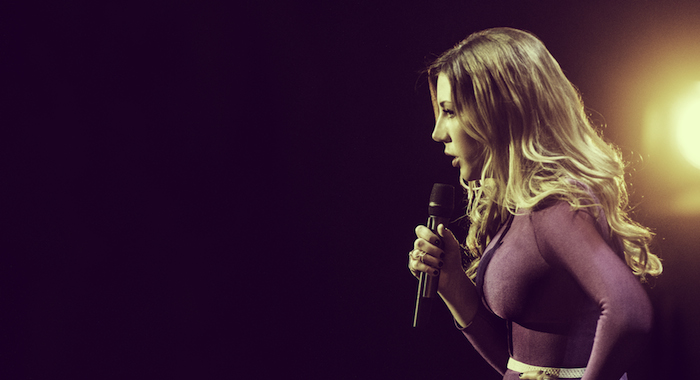 Ryan goes further to speculate on what would happen if comedians like Amy Schumer or Tina Fey raped an aspiring comic like herself. It gets a bit absurd, but Ryan thinks it’s equally absurd to ask a victim, “Why didn’t you come forward sooner?”

“I definitely sympathize with the survivors and all survivors,” Ryan said. “I get why it’s not completely straightforward, but how dare you ask them, ‘Why didn’t you say anything?’ It’s such a loaded accusation. I think that bit is meant to be provocative and a little bit ridiculous, but first and foremost, it is advocacy for the survivors. I like an element of ridiculousness. That is a very dark issue, but I think there’s lightness and dark in life and so there should be lightness and dark in comedy.” 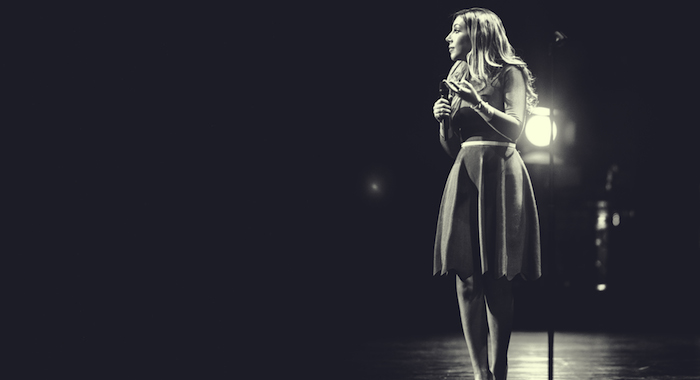 Being a standup comic, single mother, and Canadian immigrant to the U.K. gets Ryan a lot of unsolicited advice. People mean to be helpful, but encouraging her to remarry and be more “normal” is actually robbing her of her independence.

“It’s that whole thing of, ‘What’s right is not always popular and what’s popular is not always right,’” Ryan said. “That was written on the wall of my 10th grade English class. I think it always stuck with me. When you stand out in a small town, or at work, or in your peer group, whatever it is, it feels really awful. Certainly when you’re growing up you want to be normal. You just want to fit in. Then you realize that maybe fitting in is, in some respects, quite ordinary. I think it’s good to put a positive spin on being slightly unique.”

7. WOMEN HAVE FIGURED OUT NEGGING 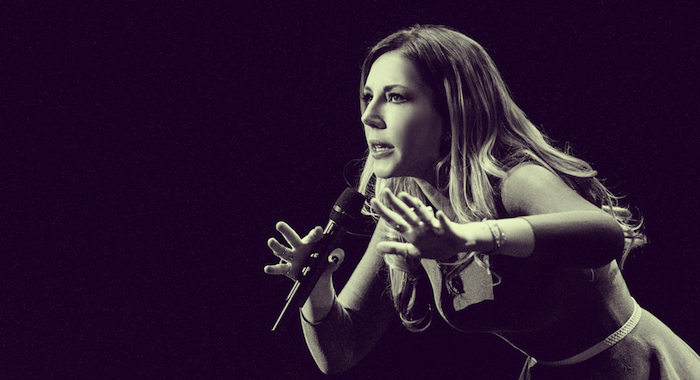 In his 2005 book The Game, author Neil Strauss exposed the phenomenon of negging, wherein men use backhanded compliments and flagrant insults to psychologically manipulate women. One would think that exposing the tactic would enable women to resist it, but it continued to work for so-called pickup artists. 12 years later, women like Ryan have caught on, and she encourages women not to play into negging.

“I certainly hope that women do not fall influenced to negging, and I hope that people stop negging altogether,” Ryan said. “I think that human beings are a very interesting mix of sentient computer and animal. My good friend, Sara Pascoe, a British comedian, actress, and author, has a book out right now called Animal that explains all the different chemistries within us and why they’re there and how they prove to be useful in evolution and why we feel certain ways, why we make certain romantic decisions. You wish so badly you could intellectualize above them and get control, but ultimately I don’t know.”

8. THE REAL WEDDING TOAST WAS MUCH NICER 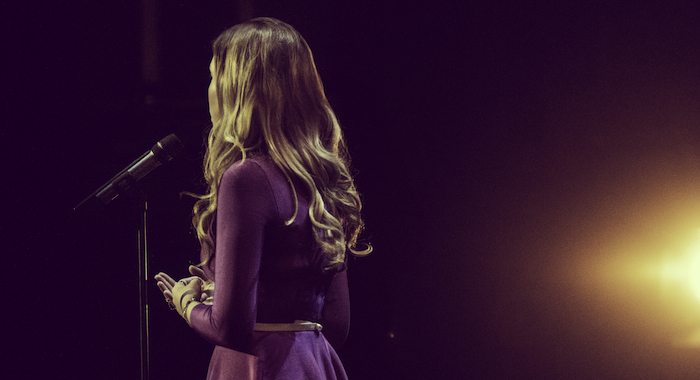 In Trouble features Ryan practicing the speech she would give at her sister’s wedding. The version in the special is scandalous and embarrassing for her sister Kerrie. The actual speech was not as harsh as the stage version.

“It went well,” Ryan said. “My sister actually just put a little bit of it up on her Facebook page today. In real life, I was of course much kinder than I say that I was in the special. I practiced that speech in my special, and then I ended up definitely softening it. It was still an edgy speech. My poor sister. What you never want to do with comedy — what I certainly never want to do — is hurt anyone.”

9. RYAN’S DAUGHTER IS OKAY WITH THE BUNNY STORY 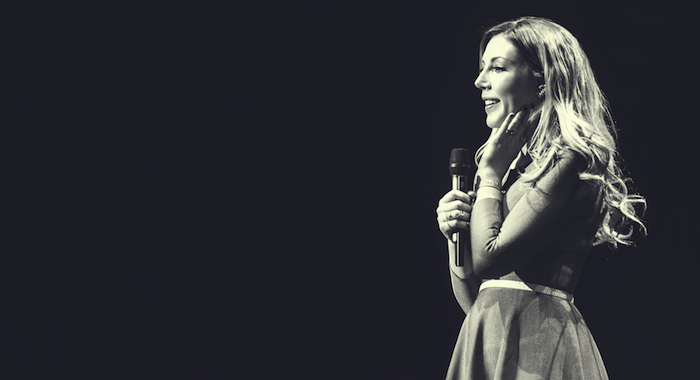 Ex-boyfriends and celebrities are fair game for Ryan, and she even tells some jokes about her daughter Violet. One elaborate story involves taking Violet’s pet rabbit to the veterinarian. Spoiler alert: the rabbit doesn’t make it.

“Violet understands that I turn things from real life into comedy, and I think it helps,” Ryan said. “It helps everyone to have a laugh at a situation. It was harrowing on the night. It was such a fantastical, eventful evening, and those evenings come out of nowhere. We sat in the kitchen making dinner, and all of a sudden it all kicked off. I just started telling people. I love storytelling. I think that’s our oldest and most cherished tribal form of communication. I hang out with so many comedians that go, ‘Do you use that? Is that a bit?’ And it isn’t, but then it turns into one. Oh, that poor bunny.”