"I did slightly more research than I did to fight as Johnny Karate," Pratt says.

Always trust a man in uniform?

Maybe not so much in The Terminal List, Prime Video’s psychological action-thriller adaptation of former Navy SEAL Jack Carr’s novel of the same name.

Premiering all eight episodes on July 1, the series stars Chris Pratt as Lt. Commander James Reece — a SEAL who is one of two surviving members of his platoon after a covert mission goes horribly awry. Once back home, Reece is told he suffered a brain injury during the battle. He also has trouble separating fact from fiction about what actually happened in the field; something that begins to bleed over into his life back in California with wife Lauren (Riley Keough) and daughter Lucy (Arlo Mertz). 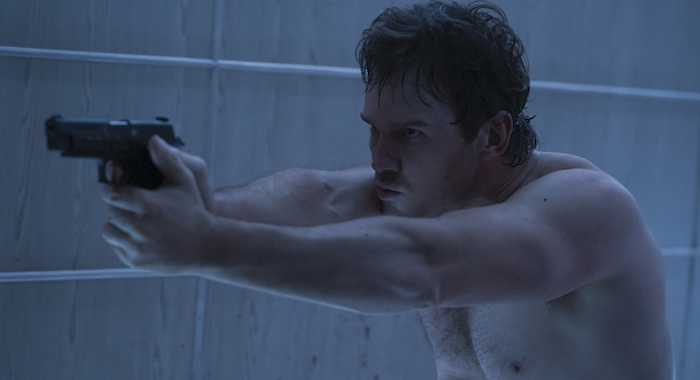 Despite the sensationalism of the plot, the series’ cast and crew strived for authenticity when it came to representing members of the military.

“From the very beginning … what was so important to everyone is that if a veteran sat down, turned this on and watched it, they would at the very least sit there and say, ‘Wow, these guys put in the time energy and effort to get this right,'” says Carr, who is also an executive producer on the series. “Maybe there’s a little Hollywood thing here there, but these guys went to every length … to do everything possible to keep this grounded in the foundation of the realities of modern combat.”

So what does that mean exactly? And what other ways does the show stand out from other military-set thrillers? Rotten Tomatoes interrogated Carr, Pratt, showrunner David DiGilio and first episode director Antoine Fuqua.

1. Pratt’s Training Was a Lot Different From Johnny Karate 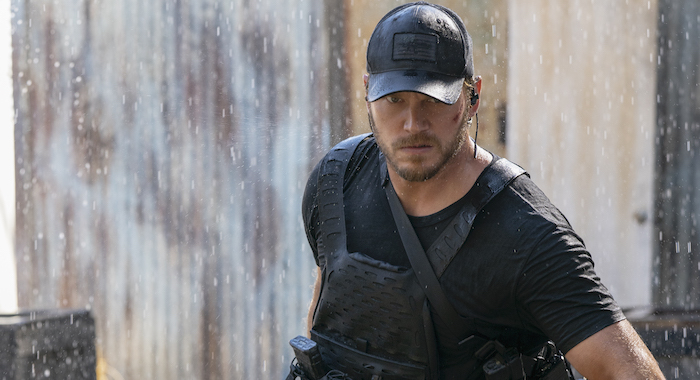 “I did slightly more research than I did to fight as Johnny Karate,” Pratt laughs when asked about any comparisons to the kids’ TV host that his character, Andy Dwyre, played in the TV comedy Parks and Recreation.

In all seriousness, former Navy SEAL and current military consultant Ray Mendoza served as a technical advisor on the show, while Pratt’s friend Jared Shaw, another former SEAL and the one whom the actor shadowed while preparing for the film Zero Dark Thirty, was a co-producer on the show and played Reece’s friend and platoon member, Ernest “Boozer” Vickers. Also, former Army ranger Max Adams was a member of the writing staff.

Pratt trained not only in weapons handling — including how to count rounds of ammunition fired and do a tactical reload before entering a dangerous area — but situational awareness, driving techniques and proper language and terminology. (His character, Carr says, should be noted as a prior enlisted SEAL sniper who was moving his way up to Troop Commander).

Pratt has carried this heightened state of awareness into his personal life. He can now tell if a member of the paparazzi is tailing his car. 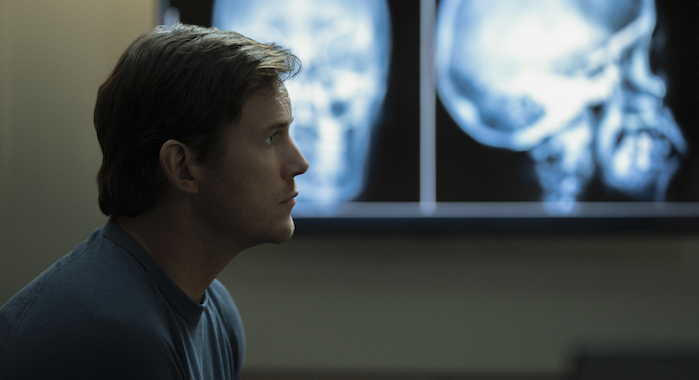 The horror Reece experienced overseas, and the impact from it, is not something the show ignores.

“I think PTSD and TBI — Traumatic Brain Injury — these are massive issues that are only now really coming into light and being explored in the way that they need to be,” showrunner DiGilio says. “Sometimes people, and writers in particular, can be a little lazy and use it as a crutch instead of really diving into it.”

He says that, even though the show is a psychological thriller, “what we’re excited to do is shine a light on what it’s like for operators to come back home after dealing with these incredibly traumatic events.”

Fuqua adds that “I hope we keep a level of respect for our military men and women” and that “I’m concerned, like we all are, about when they come home. I don’t think we’re taking good care of them. I think we could do better.”

3. The Camera Doesn’t Let the Audience Know What’s Up 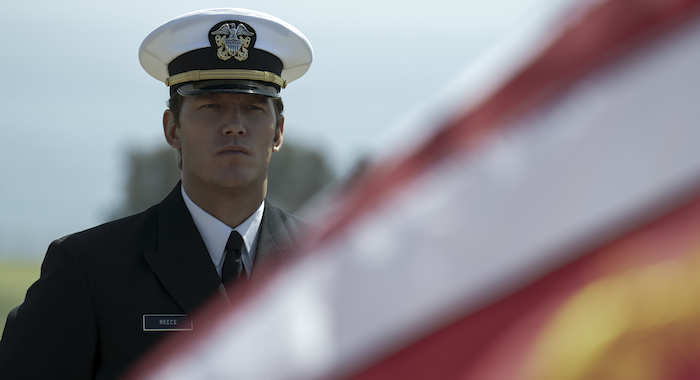 In setting up the series, Fuqua says he took the “unreliable narrator” approach to scenes where Reece may be under attack (or may just think he’s under attack).

“I track him a lot. And I was stalking him a lot. I would point to the head; his brain from behind,” the director says. “There’s some shots that are really tight on his face where the edges are a little out of focus and his eyes look a little wild to make the audience feel uncomfortable a bit.”

He says the point was to show that “everything was not clear and that was, sort of, the workings of his brain.”

4. Fuqua Uses His Art As a Statement 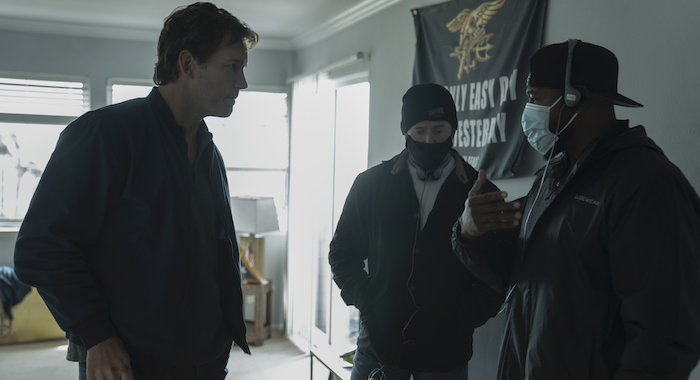 The Terminal List was ordered in 2020 right before the coronavirus-related shutdown and the writers broke the first season via Zoom (in fact, they didn’t gather in real life until the show’s premiere event in June).

Fuqua, who has a history of working on military and police-related material with projects like Training Day, Shooter and Brooklyn’s Finest, says he didn’t have any hesitation with continuing with this project as the Black Lives Matter movement grew after the deaths of George Floyd and others in 2020.

5. The Show Opens With a Bible Story, But Isn’t Religious 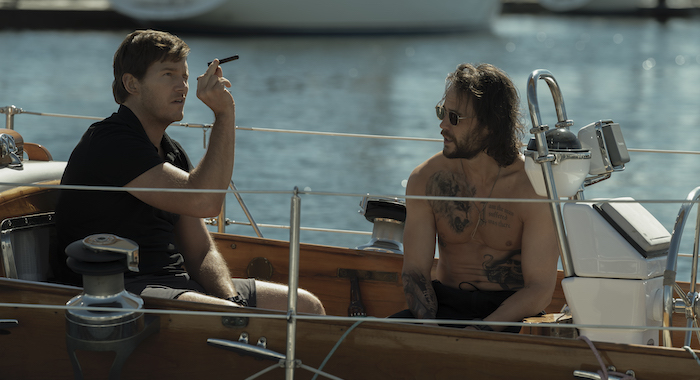 The show opens with a voice-over of Pratt’s Reece telling a story from “The Book of Judges” from the Bible and is about the military leader Gideon choosing the best warriors.

This is a slightly different opening from the book, which starts almost immediately with a battle sequence. DiGilio says that this dialogue happens later in the book, during a scene between Reece and his mother. This scene didn’t make it into the TV adaptation, but the showrunner says he still wanted to include the message of Gideon “because it deals with the warrior ethos.”

“And that’s what Jack Carr’s novel, and this show, does better, I think, than anything else before is it’s a look inside the warrior class,” DiGilio says. “And what happens if you push a member of that class to the breaking point. We knew it was incredibly important to take a story that speaks to the millennia-old tradition of the warrior class and put it up front because it becomes the lens through which to look at the rest of the events.”

He says that the passage is “an incredibly important story because it deals with the warrior ethos.”

“Reece is a man of faith. He’s a man of strength and a man of tradition,” DiGilio says. “And so, we figured, this is a perfect passage to use to introduce the character and these incredible SEALs of Alpha platoon.”

6. The Cast Is Stacked with Known Actors 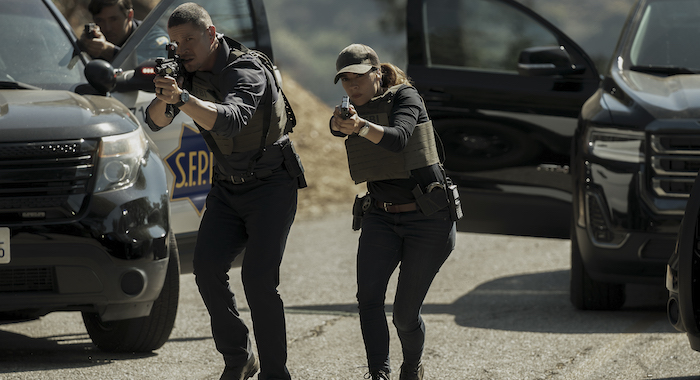 “Anytime you have a movie star like Chris Pratt driving your a storyline, it demands that you then have movie stars of equal amazing talent and charisma in your other storylines,” DiGilio says. “Any time you step away from your number one on the call sheet, you need to land with actors and actresses who are number ones in their own right.”

He was especially impressed with Mayans, M.C. actor Pardo, who was cast late in filming, but who holds his own against Pratt particularly well in the sixth episode.

7. Comparisons To The Fugitive Are Welcome

Fuqua says he remembers watching films like Parallax View and Jacob’s Ladder when he was younger and that he was influenced by the psychological thrillers directed by Brian De Palma. However similarities to the 1997 Andrew Davis–directed action movie The Fugitive about a man wrongly convicted for killing his wife, or its TV predecessor, didn’t dawn on him until this interview.

DiGilio says that the film, which starred Harrison Ford and Tommy Lee Jones, “played heavily in our writers room minds” as they were breaking the story involving Pardo’s character.

“This is a character who is chasing down Reese and questioning what he is doing; questioning his version of justice,” DiGilio says. “I think that, actually, those comparisons are welcome.”