The Maze Runner Franchise Limps to the Finish Line

Plus, Hostiles is a solid Western and Jean-Claude Van Damme's latest Kickboxer outing is surprisingly fun.

This weekend at the movies, we have the belated conclusion of the Maze Runner trilogy (Maze Runner: The Death Cure, starring Dylan O’Brien and Kaya Scodelario), and Christian Bale riding a horse (Hostiles, c0-starring Rosamund Pike and West Studi). What are the critics saying? 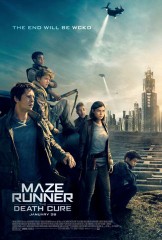 Timing is hugely important for any movie, and for a film franchise based on a series of YA novels, momentum can be crucial — it’s important to strike before your target audience ages out and moves on to something else. The Maze Runner movies were forced to confront this principle in action when leading man Dylan O’Brien was injured on the set of the third installment, Maze Runner: The Death Cure; O’Brien’s surgery and recovery led to a delay of roughly a year, and although a person’s health is obviously far more important than the commercial fortunes of a film, there’s no denying that most releases in this genre have a fairly limited shelf life, and by waiting, The Death Cure risked seeing its window swing shut. On the other hand, its prolonged gestation doesn’t seem to have affected this chapter’s critical reception; like the prior Maze Runner outing, 2015’s The Scorch Trials, it’s edging up on a 50 percent Tomatometer, with reviews describing a saga-concluding adventure that proves occasionally exciting in a generally predictable fashion. For fans who’ve followed along until now and are still along for the ride, Maze Runner: The Death Cure should prove an engaging enough conclusion — but as with any other film series approaching its end, the unconverted probably need not apply. 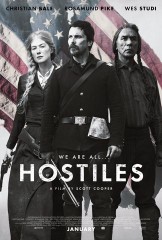 Writer-director Scott Cooper has earned widespread critical acclaim by finding the emotional pull in stories about hard people having hard times in hard places, and with this weekend’s Hostiles, his creative journey takes him back to the late 19th century and way out west, where a U.S. Cavalry officer stationed in New Mexico (Christian Bale) is ordered to bring a dying Cheyenne chief (Wes Studi) back to his tribal land in Montana. Along the way, their group encounters a ruined home where a shellshocked widow (Rosamund Pike) is grieving the murder of her family by a Comanche war party — a meeting that irrevocably alters the journey for all concerned. It’s the setup for the type of wind-whipped frontier drama we’ve already seen countless times, and critics say Hostiles definitely hews to its share of conventions. The end results still engage, however, thanks to Cooper’s determined direction and layered story — not to mention typically great work from Bale and Studi as well as a standout performance from Pike. While it ultimately may not lead audiences down many trails they haven’t already explored, Cooper’s latest outing makes it well worth saddling up for genre fans.