The Good Doctor and the Undeniable Power of a TV Underdog

Freddie Highmore and the medical series cast let us in on the complex relationships that have made this ABC offering a giant hit. 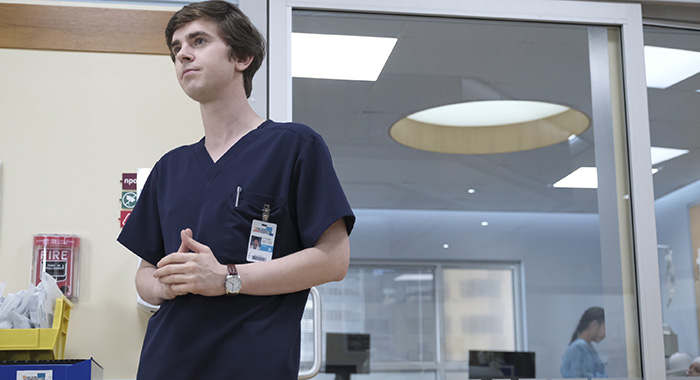 ABC’s The Good Doctor proved itself one of the biggest hits of the fall – a top 5 scripted series for all of 2017 by Nielsen ratings.

And series star Freddie Highmore (Bates Motel), who plays Dr. Shaun Murphy, found himself nominated for a Best Performance by an Actor in a Television Series – Drama, an award that ultimately went to Sterling K. Brown for This Is Us. Highmore was, however, in very good company, which, in addition to Brown, also included Jason Bateman (Ozark), Bob Odenkirk (Better Call Saul), and Liev Schreiber (Ray Donovan).

When you’re from Rotten Tomatoes and you visit the set of The Good Doctor, there’s an elephant in the room when you meet the series’ stars: the show’s Tomatometer score, which, after the series’ September 25 debut, hovered in the 30%-40% range.

The season has since recovered to a 58% Tomatometer and will likely move higher as the season goes on and new reviews perhaps lose a certain level of cynicism around this story of an autistic doctor trying to succeed in a world that is often hostile to his needs and to his unique, often brilliant, sometimes completely wrong perspective.

In a recent episode, Dr. Murphy learns the trifecta of flirting from another surgical resident at San Jose St. Bonaventure Hospital, Dr. Claire Browne (Antonia Thomas): a touch, a giggle, and a hair sweep. Such are his social limitations currently.

“The interesting thing about playing Shaun,” Highmore told Rotten Tomatoes, “is that he’s experiencing the same breadth and width of emotions that your typical person would be, but they’re expressed in different ways and perhaps it lends itself to him being more internal at times, not so immediately accessible. But of course we still want to connect with him, and we still want to understand what’s going on in his mind.”

With The Good Doctor’s midseason return on Monday, “Islands, Part 1,” the series will continue to portray Shaun’s exploration of his limitations and his stuttering attempts to create a life he fully controls – whatever the good intentions of Dr. Aaron Glassman (Richard Schiff), who is president of the hospital.

Dr. Glassman pressed Shaun too far in the fall finale, “Sacrifice,” trying to get the young doctor to see a therapist.

Highmore said of Shaun’s relationship with Glassman: “That’s something that will continue to be unpicked and unstitched, if you like, as the season goes on. I think what’s interesting there is, of course, not only what’s been happening in the present but the back story. And we’ll continue to find out more about their history together and how he and what role he played in Shaun’s journey to getting to the hospital in the first place.

“I think Glassman is a nice bridge between Shaun’s life at work and life at home. Glassman feels responsibility to protect Shaun and to try and help Shaun in all areas of his life. But Shaun of course also wants a certain amount of independence and I think they’re will be a friction between the two of them because of that,” said the British actor, who adopts an American accent for the role.

Also in Shaun’s workplace orbit are fellow resident Jared Kalu (Chuku Modu), cardiothoracic surgeon Neil Melendez (Nicholas Gonzalez), and hospital board member and Chief of Surgery Marcus Andrews (Hill Harper), each of whom at different times have had their doubts about their autistic colleague.

“He’s definitely not prejudiced against Shaun – the fact that he happens to have autism,” Modu explained. “He’s just highly ambitious, so it could be anyone in the team, male, female, and he would try and ostracize them a bit because he wants to be the man. Melendez quotes, ‘You’re all quarterbacks. By the end of the season, there’s only gonna be one starter.’ And, in Jared’s head, that’s him. Also the fact that Shaun has quite a good relationship with Claire; I think he feels a little bit threatened by that.”

But Shaun may not be equipped to navigate aggressive professional ambition, particularly when it’s coming from more than one direction; in addition to Kalu, doctors Melendez and Andrews each have their own agendas, and each began the series harboring extreme doubts about Shaun’s ability to function in the high-pressure hospital environment.

“He still has his goals,” Harper said of his character. “He believes he should be in control of this hospital and he believes he will, but at the same time, he has a certain standard of practice of the way he likes to operate and work and he believes in hierarchy. I guess I see him much like the general who understands that he’s the general, and wants to have people have an experience of going through the ranks.”

Harper said the story is set up for the audience to experience growth in those relationships from episode to episode as more of each is revealed.

“I have a line in [an earlier] episode where Murphy actually questions me and says, ‘How come he got to do that and I didn’t?’ And I explain to him a couple of things: I say “No. 1: It’s a teaching hospital. No. 2: He’s been here longer. And No. 3: I told him to do it, and I didn’t tell you to do it, so shut up.’ Now that’s not the line, but that’s basically what it is, right? And that has nothing to do with his condition; that has everything to do with him being a brand new resident. I love that.”

Gonzalez spent a lifetime watching his father and brother, both surgeons, work in the medical field, so when he has a question, he just makes a call to get guidance on portraying Dr. Melendez.

“You go through different trials and tribulations in a friendship and a work relationship and this is no different. In a hospital there’s a lot of high-energy, seat-of-your-pants, in-the-moment things that need to be done,” Gonzalez said. “So, if I can speak as Dr. Melendez, then when I’m in the operating room, I want eliminate everything that’s the unknown. I wanna take out anything that’s unpredictable. And right now Shaun isn’t predictable.

“At the same time I hold him to the same standards as I do the rest of the residents,” he continued. “When care for the patient is No. 1 and then after that is respect levels for my residents. But that love and that respect means I’m going to teach them and teach them well. It’s not about holding their hand and trying to define their emotions.”

One of the most powerful figures in the St. Bonaventure Hospital setting is Allegra Aoki (Tamlyn Tomita), chairman of the foundation and vice president of the hospital, who is a decision-maker.

“She is a person who is held accountable,” Tomita said, without being “for lack of a better word, a ‘B.’”

Tomita, who has friends with kids who are autistic, offered high praise for Highmore’s performance: “He works so hard at portraying Shaun Murphy as correctly, as righteously, as sensitively as possible, because knowing that, first, he is not on the autism spectrum, [and] he doesn’t represent everybody who has autism, he is in a tricky balancing position, so he has to really make sure that his heart really reads.

“Having to portray a person with autism, they don’t communicate in the ways that neurotypicals do. He’s just finding a new language, a new mode of communication, and he’s really quite wonderful to watch. And work with,” she said.

Highmore promises much more of Shaun’s complexity will be explored in the second half of the season, including personal relationships like the one with his extrovert neighbor, Lea (Paige Spara).

“It’ll be interesting to see where that relationship goes,” he said. “And I think there is a battle between Shaun having a confidence in his abilities and feeling more and more that he does have a voice in the hospital and does have a role to play. And I think that’s exciting for him, but at the same time, as we’ve already seen, he’s not some superhero who gets everything right.

“I think Shaun to the rest or majority of the people in the hospital still has to prove himself, and that’s not going to be something that comes quickly or easily,” he continued. “I think Shaun’s an optimist. I think that’s what people are attracted to in him. I don’t think there’s a lot of negativity that he — he doesn’t have ill feeling towards anyone in the hospital. I think he’s happy to be there, excited to be there, happy to contribute in whatever way he can or is allowed to. I think that’s what makes him attractive, or potentially has been attractive to audiences about him is that he’s always seeing the good in people.”

Speaking of good, The Good Doctor‘s audience score? A healthy 88%.

The Good Doctor airs Mondays at 10/9C on ABC.