The Falcon and the Winter Soldier Episode 1 Deep Dive: Everything That Happened – and What It Means

Often in comics, one miniseries or event title leads directly into another comic book series with little or no downtime. And while The Falcon and the Winter Soldier does not intend to pick up any of WandaVision‘s batons — in fact, it was originally scheduled to bow first — debuting two weeks after that other show’s finale offers viewers a little bit of the thrill of picking up the first issue of a follow-up story. That sensation changes as soon as the first episode truly begins and Sam Wilson (Anthony Mackie) reveals a part of what he’s been up to for the last few months: fighting dudes like Batroc (Georges St-Pierre) for the U.S. government.

So let’s catch up with him, James Buchanan Barnes (Sebastian Stan), and the Marvel Cinematic Universe as a whole as we dive into the first episode of The Falcon and The Winter Soldier.

Spoiler alert: The following reveals details of The Falcon and the Winter Soldier episode 1, “New World Order.” Stop here if you have not watched the episode. 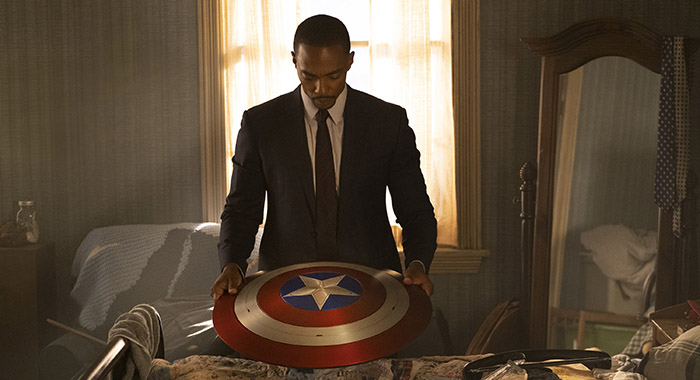 As we go further into Phase 4, the end of Avengers: Endgame becomes an important marker of time. WandaVision takes place mere weeks after the Avengers restored roughly 3 billion people to life. Spider-Man: Far From Home occurs the next summer. Black Widow, as it happens, will apparently occur six years prior to Endgame. And the first Falcon episode establishes that some months have gone by.

It appears that distance from everyone coming home will be an important plot point. The economic instability suggested in Wanda’s (Elizabeth Olsen) first trip to Westview continues to matter and even seems to be contributing to an as-yet-unspecified political upheaval. To be sure, Sam’s difficulty in securing a loan is a mostly separate issue — more on that in a moment — but the tense situation Rhodey (Don Cheadle) and a few other government types keep dancing around seems connected to the sudden (and we assume occasionally fatal) return of everyone who was lost when Thanos first snapped his fingers in Avengers: Infinity War.

In terms of those whispered economics, we imagine insurance companies went right to work trying to reclaim any death benefits they paid out in the previous five years. The returned also probably expected to go back to work at jobs that either evaporated or found new hires to fill the vacancies. Of course, there’s the individual psychological toll to consider, but the instability people keep telling Sam about is the aggregate of those things and is typically expressed in terms of financial and political unrest. And in this episode, we’re only seeing the edges of that picture.

Nevertheless, the timing still matters as Far From Home presents a world — or at least certain European cities and New York — more or less recovered. Whatever powder keg the generals at Steve Rogers’ (Chris Evans) memorial expected to explode in the short term sure hasn’t a handful of months later.

Or, perhaps, Sam and Bucky were instrumental in preventing it from happening.

When Even an Avenger Can’t Get a Loan 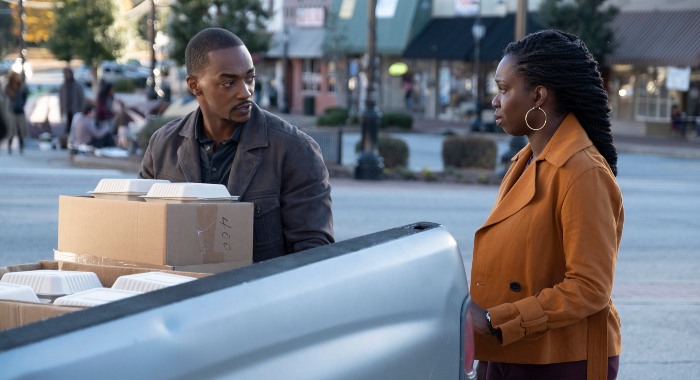 One interesting element of the episode is seeing just how accustomed Sam became to the privileges of being an Avenger. To be fair, he lost them as soon as he and Steve defied the Sokovia Accords in 2017, but his expectation that his status as a world-saving superhero would make his loan application a breeze is a bit naive. Nevertheless, it is an interesting way for Marvel Studios as a whole to broach a topic like systemic racism.

Each dimension of the scene is fascinating to examine, in fact. Beyond Sam’s seeming overconfidence, you have the loan officer unsure of Sam’s identity (ouch) and his inability to approve the loan because of the bank’s rules, which are built against people like Sam and his sister, Sarah (Adepero Oduye). Then you have her understanding that this was the only way their visit to the bank could transpire — a reality Sam has seemingly forgotten thanks to years in the service and his time in a much more egalitarian organization. Then there is that question: was he receiving income from Tony (Robert Downey Jr.) during the time he worked out of the Avengers HQ? And is his current government contracting something he can claim on the application?

We’ll also step back a bit and note the bank appears to be offering no sort of amnesty for those who were Blipped. Their five years without jobs or income stands against them. Although, we imagine the bank bends that rules in certain situations.

But no matter the reasons for Sam and Sarah to walk out of there defeated — or however an individual viewer may regard the scene — it indicates a growing maturity for the Marvel method while feeling like a natural extension of the Captain America film series philosophy. Now, it’s finally pointed to a contemporary situation.

Bucky Got a Haircut, Found a Date, and Can’t Deal With His Guilt 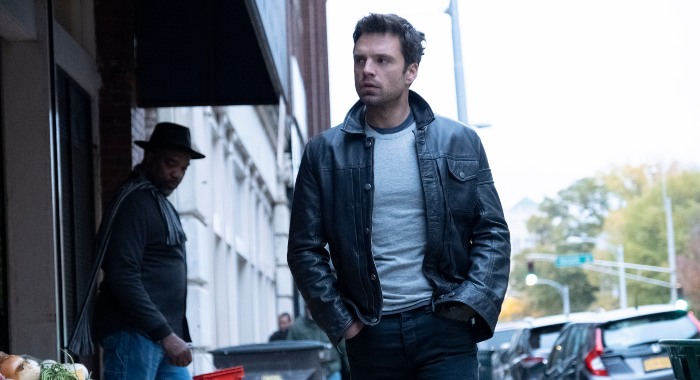 This might be kind of shallow, but we’re very glad to see Bucky finally did away with his grungy Winter Soldier hair. Yes, there’s definitely a psychological advantage to doing so — he can look in the mirror and not see the monster who haunts his nightmares— but on a purely aesthetic level, Bucky is a much more handsome man with a closer-cropped do.

We imagine it is something his therapist encouraged him to do, but it’s also possible he chose to do it all on his own in the hopes of reclaiming some part of the man he was before he went to the war. The visual similarity to the dashing lad who showed Jenna Coleman around that science expo in Captain American: The First Avenger is striking. But there is also the sharp contrast of this shattered old man hidden just under Bucky’s relatively youthful appearance.

Although, we’ll admit, it is easier to see that 106-year-old man when he and Yori (Ken Takemoto) go to lunch. It is interesting that these scenes (and his therapy session before them) are the first time we’ve really seen Bucky try to cope with everything. Sure, he had that period in Wakanda, but note the way that’s minimized in this episode. Those handful of scenes in Black Panther and Infinity War are not about a solider and conscripted killer processing 70 years of trauma. And, really, they couldn’t be. Now, though, both we and Bucky have the chance to explore it. 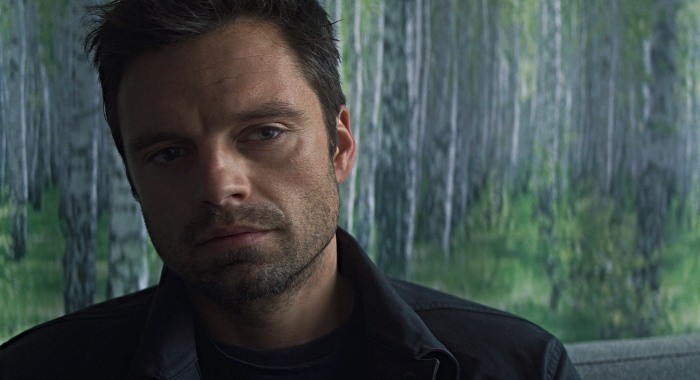 Which makes the date Yori gets for him and his guilt-induced nightmare all the more fascinating. In regards to the former, it make for a fascinating contrast with the cocksure kid in The First Avenger. He absolutely fumbles at every turn and she carries that date until he walks out.

But, really, Bucky’s in no place to date. He has to finish making amends. At the very least, it would resolve his nightmare. But telling Yori the truth may be the hardest thing he will have to do to complete the task. Sure, Yori may think he wants to know that truth, but what will happen when he finds out this man he’s befriended is his son’s killer? Bucky has a real ease with him — to the point where the first scene at Izzy’s plays as though Yori knows Bucky’s real identity — and to lose that bond would be a real setback even if the truth is, ultimately, more important.

It’s a different sort of jeopardy for the Winter Soldier to experience, but it reflects the sort of show Falcon wants to be. We just hope Bucky gets some sport of peace by the time we get to the end of it.

The Portents of Trouble 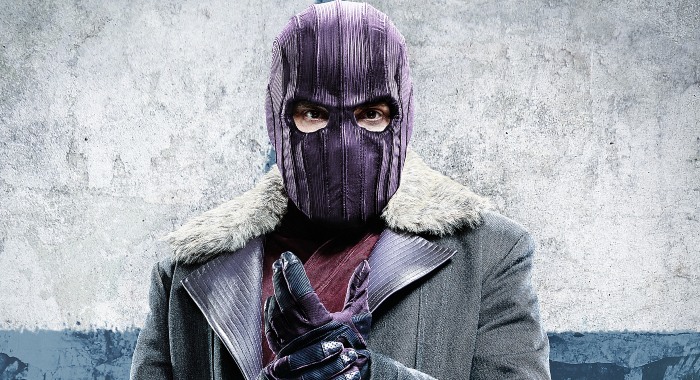 Curiously, though, the first episode resists the temptation to feature Helmut Zemo (Daniel Brühl) or reveal any aspects of his plan. Although, it’s pretty easy to imagine the Flag Smashers as a nascent Masters of Evil. That group, formed by Zemo’s father in early issues of The Avengers comic book, will never use that name in the MCU. But it will be interesting to see if The Falcon and the Winter Soldier attempts to employ one of their better known lineups under a different moniker. As it happens, Flag-Smasher is a singular villain in the pages of Marvel Comics and Erin Kellyman briefly appears in the episode as a female version of that character.

Of course, because we’re assuming a lot this week, we imagine the Flag Smashers are tied to Zemo. But what if they’re not? Their aims may be there own while he stays true to his plans as a lone operative.

To a certain extent, Zemo is the most successful MCU villain. He tore the Avengers in half, and although they did reform, they are no longer the imperial force he saw when Sokovia fell. But considering the views we’ve heard him espouse in trailers, moving his brilliance to ending superheroes entirely could lead to a number of broken costumed folk.

Then there’s that counterfeit Captain America (Wyatt Russell). Fans of the comics will recognize U.S. Agent on the spot, but we’ll hold off on examining him and his comic book counterpart until next week when, presumably, we’ll know more about his status in the MCU and what he does to inspire Sam’s desire to retake the shield.

But for all these uncertainties, at least Sam and Bucky will have allies in the coming fight thanks to people like Sharon Carter (Emily VanCamp) and First Lieutenant Joaquin Torres (Danny Ramirez), a kid in the army who may have a fascinating destiny as the series wears on.

The Falcon and the Winter Soldier premieres new episodes on Fridays on Disney+.