The Crown  season 5 picks up with the royal family the early ’90s. Princess Diana (Elizabeth Debicki) and Prince Charles’ (Dominic West) marriage is in turmoil, and Princess Di is telling her story to Andrew Morton. Other royal marriages are also bucking long-standing traditions.

Queen Elizabeth (Imelda Staunton) and Prince Philip (Jonathan Pryce) are trying to hold the family together amid scandals growing increasingly more public with the modern media. Princess Margaret (Lesley Manville) still stands by Elizabeth’s side, but, as ever, with some personal drama of her own.

Rotten Tomatoes spoke with Staunton, Price, and Manville about their work on the new season. Here are seven things we learned. 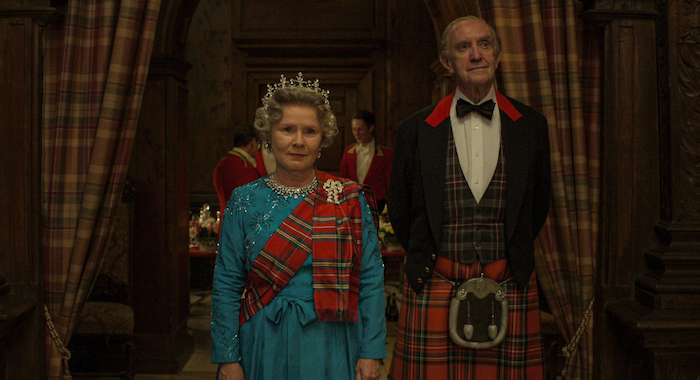 Their son may be having an affair with Camilla Parker Bowles (Olivia Williams), Princes Andrew and Edward and Princess Anne’s relationships are in various stages this season, too, but Elizabeth and Philip remain the bedrock of the royal family.

“There were two people who, luckily when they did get married, were very much in love,” Staunton said. “But also knew what lay ahead for them in their lives with their responsibility and that they both took those responsibilities very seriously. But equally, it was bound up in a great respect for each other and a great love for each other.”

That’s not to say everything was perfect for them, but you’ll have to watch the new season to find out.

“What The Crown does is gives you a chance to see the ups and downs of that marriage,” Pryce said. “It’s a very realistic viewpoint.” 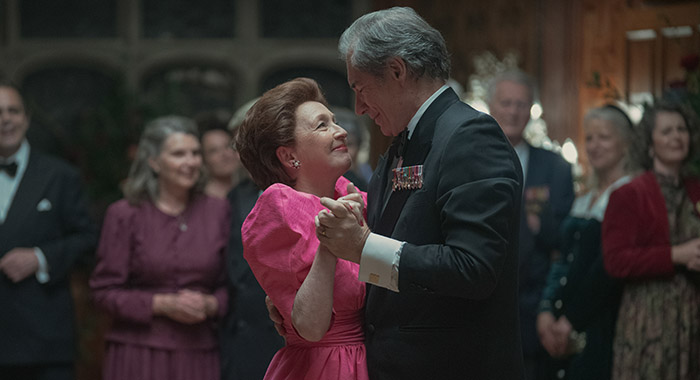 Teenage Princess Margaret fell in love with Captain Peter Townsend when he was already married. In The Crown season 5, Margaret reconnects with Peter, which is inspired by a real-life reunion.

“Peter [Morgan]’s written a very beautiful episode where they do reconnect and they spend an evening together and are reminded of their erstwhile love and the fun and the gaiety and the heady nature of their relationship and what that was like,” Manville said. “But of course they’re looking at it now through the lens of age and being 40 years on from when it happened. But it’s very tender and touching.” 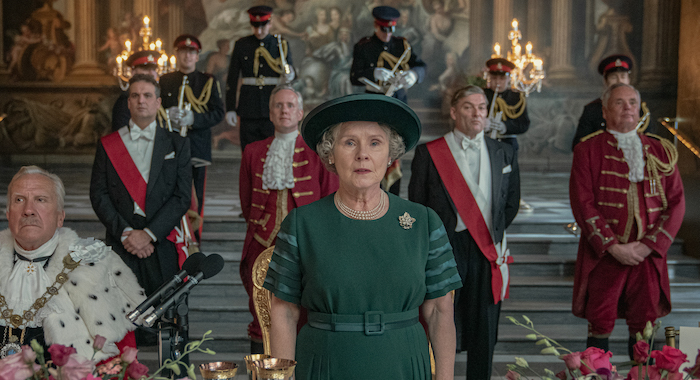 Queen Elizabeth II died on Sept. 8 at the age of 96. Staunton understood if some viewers are not ready to revisit some of the royal scandals a mere two months after her passing, but she reminds them that they completed the season six months ago. It was business as usual on the set of The Crown.

“It’s understandable that people are sensitive about it, but we finished this season six months ago,” Staunton said. “I think Peter’s writing has great integrity and he has been writing about the queen since Helen Mirren, so I think he has a great respect for her and the family.” 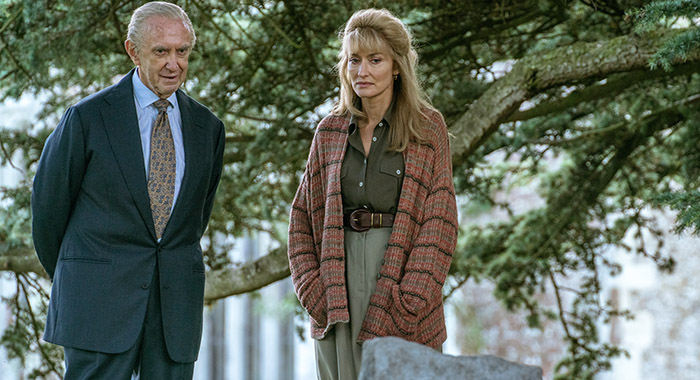 Some notable Brits have raised question about the depiction of some events in The Crown season 5. Former Prime Minister John Major told The Times a scene in which Charles suggests (played by Jonny Lee Miller in the show) removing the Queen so he can reign never happened. Dame Judi Dench wrote to The Times and urged Netflix to include a disclaimer confirming the show is fictional, though it was always presented as a historical drama. Responding to those suggestions, Pryce thought it was much ado about nothing.

“I wouldn’t have a problem with it, but I don’t think it’s necessary,” Pryce said. “And I think it does the production and the people involved in the production, the actors, everyone who is fully committed with great integrity to this production, it does them a great disservice. It does the audience a great disservice and has almost a patronizing effect that they need to be told, ‘Dear, sweet unthinking people,’ that this is a drama. It isn’t real life. And it’s been running for four seasons. Where have these people been?”

Staunton agreed with Pryce, simply stating, “I’m with him.”

“She said, ‘Do they think we’re all brain dead?’” Pryce said. 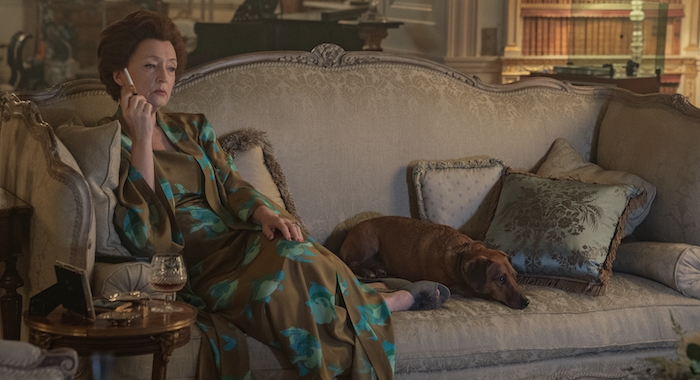 Queen Elizabeth is on the front lines of royal marital scandals and suggestions of political upheaval in season 5. She has further family support in Princess Margaret.

“That came out of Margaret having a quieter life at this point and having less social engagements than she used to have,” Manville said. “But I think also trying to be more actively supportive to the queen and do her duty by her sister a little bit more. It coincides with Margaret having a quieter and lonelier life, so it’s the inevitable route to take. She still has a social life and friends and she still goes on her holidays to Mustique, but her life is dialing down a little bit.” 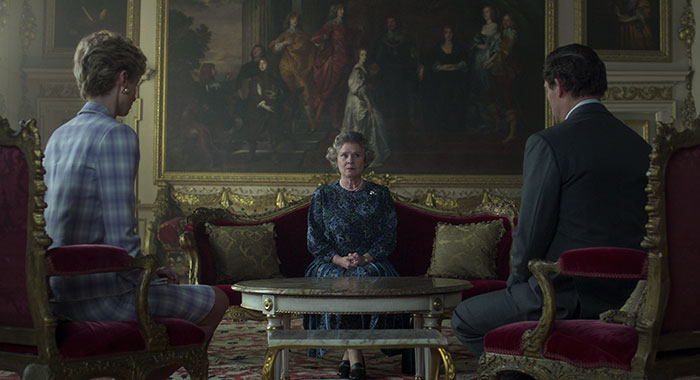 By season 5, Princess Margaret has been divorced since 1978. As Charles and Diana’s marriage collapses, Prince Andrew had recently married Sarah Ferguson and Princess Anne was marrying her second husband, Timothy Laurence. Margaret does confront Elizabeth on the sacrifices she made for the royal family, which the subsequent generation didn’t have to make.

“Certainly in our story, you see it affecting her quite a lot,” Manville said. “So much so that she feels compelled to challenge her sister and go back 40 years to remember why she was denied the man she wanted to marry and yet all of the queen’s children are not being denied the freedom of choice as to who they are with. It’s painful but it’s stuff that she has to say. She needs to say it but the scene’s lovely and the scene that comes after that makes it very clear that the love between these two sisters is as strong as ever and as constant as ever, but stuff needed to be said.”

7. ALL THREE ACTORS LEARNED MORE ABOUT THE ROYALS 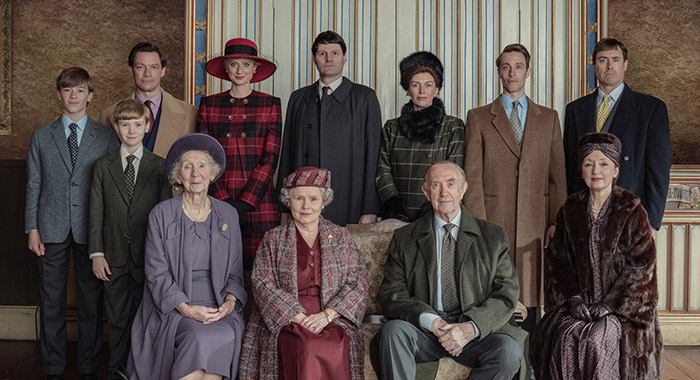 When The Crown began, it was more distant history for Claire Foy. Staunton, Pryce, and Manville all lived through the ’90s depicted in season 5; however, all three agreed the show filled in many gaps from their casual knowledge.

“This offered more in-depth knowledge for me,” Staunton said. “It’s strange, isn’t it, that a family who’ve been in all our lives for all our lives, in a way you just take them for granted so you don’t really consider them. They’re just there. But then to be given the opportunity to investigate their lives and for Peter Morgan to give us an emotional journey through these events is a wonderful opportunity for an actor to play these parts.”

Pryce tried to correct a perhaps American assumption that every Brit obsesses about the royal family. He certainly didn’t.

“The rest of the world thinks that the royal family and its goings on occupies the forefront of every British person’s mind,” Pryce said. “You go on with your life and it happens. I enjoyed being reminded of that period — not enjoying their suffering and their pain, not at all — but it was a very rich, tumultuous time for the royal family and from that comes great drama and great storytelling by Peter Morgan. So that part of it I relished.”

Manville said she had the opportunity to meet a few royals casually, but never Princess Margaret. She drew on research from books and documentaries and the scripts by Morgan for embellishment.

“You’ve got to mix it up a bit, because you’ve got to represent this person that everybody knows,” Manville said. “Then I get the opportunity to take the audience inside Margaret and what she’s thinking and feeling in a way that the audience doesn’t know.”