Creator Robert Kirkman and stars Steven Yeun, Zazie Beetz, and Gillian Jacobs talk about why the "brutal" show isn't for kids and how it stays grounded even as they're "flying around killing aliens."

Amazon’s Invincible, which starts streaming this Friday, has all the makings of a fabulous animated teen series about a superhero in training. But as both Amazon and the creators of the program have been quick to note, it is not for children. And as co-creator Robert Kirkman told Rotten Tomatoes recently, a level of maturity has always been baked into the concept. “I think Invincible has always been very mature, but I think that that maturity possibly came in more prevalent in the later issues,” he said. Beginning a long comic book run in 2003, the 144-issue series – created by Kirkman with artists Cory Walker and Ryan Ottley – tells the tale of Mark Grayson, a biracial teen in his last days of school who inherits superpowers from his superhero father. Soon, he adopts “Invincible” as his hero identity and spends most of his days hitting bad guys or being hit by them.

Of course, that description just scratches the surface as issues of parental abandonment, global genocide, government overreach, alcoholism, and infidelity also factor in. It is also wildly funny with clever quips, sight-gags about government building parking lots, and Mark’s high-strung best friend trying his best to use humor to cover-up his issues. Also, it is quite violent — a quality it shares with the animated version. 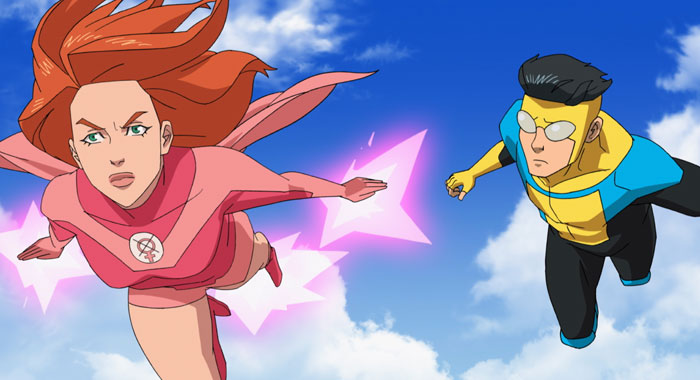 Kirkman freely admits, though, that the shape of Invincible appeared in the midst of the telling and the animated series is something of a “second draft.” As he explained, “It’s good to be able to [do it] in animation and be able to possibly unify the series a little bit more and have the maturity that was in some of the later issues present in some of the earlier seasons in this form.” Having the complete comic as a roadmap means “we’re going to come in with a more well-rounded character [in Mark] that possibly even experiences more growth as the series progresses.”

He assured readers of the series that there isn’t “too much difference really when you look at the whole of both versions,”  but certain aspects, which he described as both “brutal” and “mature,” will appear earlier on than they did in the comics. “I think because of that, there’s going to be a lot of improvement to different story aspects. And I think Mark’s character is one of them,” he said.

Playing Mark is Walking Dead veteran Steven Yeun, who read through Invincible when he was still on Kirkman’s zombie series. As viewers meet Mark, he is still waiting for his powers to appear. That level of expectation means a slightly different approach for Yeun than playing a character who gets powers by accident. Although, some things always ring true for teenage superheroes. “I think Mark is still wavering and trying to understand who he is and fight through his own expectations,” he said. 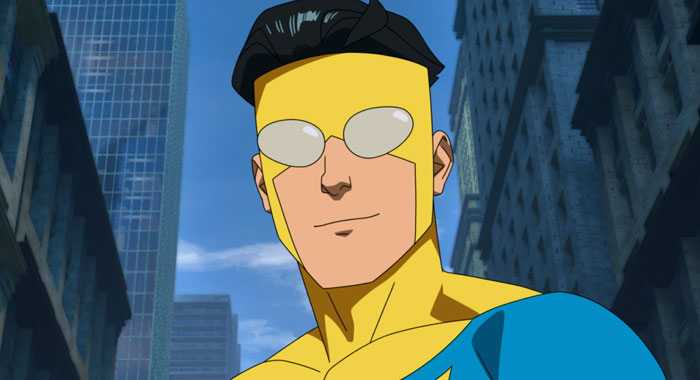 As a reader of the comics, Yeun was aware the character was the biracial son of an Asian woman, Deborah (Sandra Oh), and Nolan (J.K. Simmons), who presents to the world as white – although there is more to that, as viewers will discover. According to Yeun, presenting Mark as the lead of the series is an important element of its time and place in television history (note: these interviews took place before last week’s shootings in Atlanta).

“We can see different people that you normally don’t see in these positions, in these roles,” Yeun said. “But then what’s really refreshing is that nobody’s really aware of that on its surface, and when we’re making it. We’re talking about a real father-son dynamic and a real family dynamic. And so you’re able to service the truth of the internal life of these people. And for the outside, looking in, you also get to service the fact that we’re in a new time where it can be more eclectic and other experiences can be seen and connected.”

“I hope that it offers a sense of belonging to people just because we are in a very diverse world and, unfortunately, it’s often not reflected in our media and popular culture,” added Kirkman. Although he was unsure how authoritative he could be on the subject because he felt his “whiteness was showing,” he pointed out superhero comics took decades to center non-white characters in lead roles. “It’s very important to reflect the world around us,” he said. “And I’m very happy to be a part of that correction and moving things to a bit of a better place on that front.” 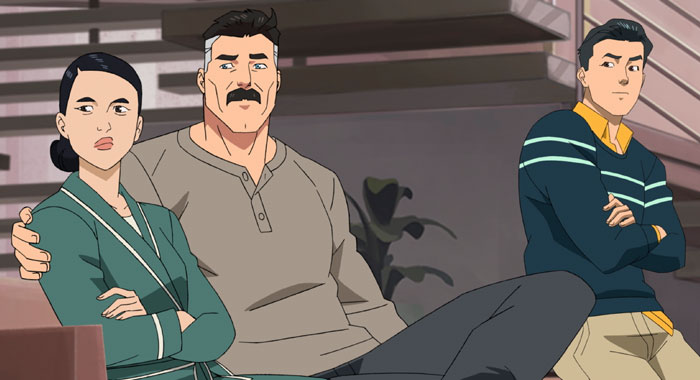 “It’s always about the human experience overall,” Yeun continued. “I think that’s the thing that I’m really excited about. Especially getting to play with J.K. He’s not my actual father, but that’s the work we do. And we get to play this out and that’s the most enjoyable part for me.”

“The kid that played my kid, whatever his name is. He was okay,” joked Simmons.

Beyond being Mark’s father, Nolan is also a prominent superhero in the world of Invincible, with many of the same foibles as certain cape-wearing folk from other comic books. That means the character will have a certain familiarity in look and in Simmons’ voice, which recalls certain notes of his roles on The Legend of Korra or even Law & Order. But the actor teased “as the show runs its course, we learn layers of complexity about Nolan.” To say any more would spoil any number of Invincible’s future storylines, but readers of the comics will know at least a few of the twists headed viewer’s way.

Beyond Yeun, Oh, and Simmons, the program also features voice work by the likes of Jason Mantzoukas, Zachary Quinto, Zazie Beetz and Gillian Jacobs. “I think ‘coming into yourself’ really is the largest theme of the show,” said Beetz, who plays a re-imagined version of comic book character Amber Bennett. 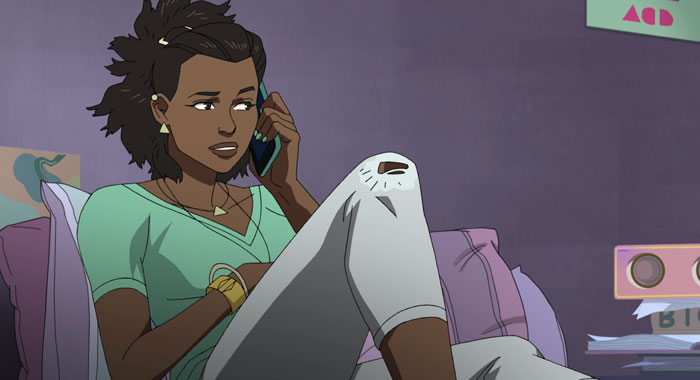 “My character isn’t a super hero character and I just kind of wanted to keep her grounded and her real,” she said of bringing a tougher, hipper Amber to life. But before any Invincible readers start to think she’s been radically rethought, Beetz noted with some jealousy that Jacobs got to do the grunts and “effort sounds” of an animated superhero.

Jacobs, who plays Mark’s superhero friend Atom Eve, said, “Standing alone in a room, pretending to punch and kick and fly while people stare at you from the other side of a glass window, is a unique experience.” The actor was working on her Marvel 616 documentary episode, “Higher Further Faster,” at the same time she recorded lines for Invincible, which added to the uniqueness of the experience.

“I was learning so much at that time and developing such a deeper appreciation for comics storytelling,” she continue. “So it was really fun to be working on that and then come to the recording studio and be talking to Robert and the writers on the show about what I was learning. So I feel like I still don’t know everything about the world of comics, but I certainly know a lot more now than I did three years ago.” 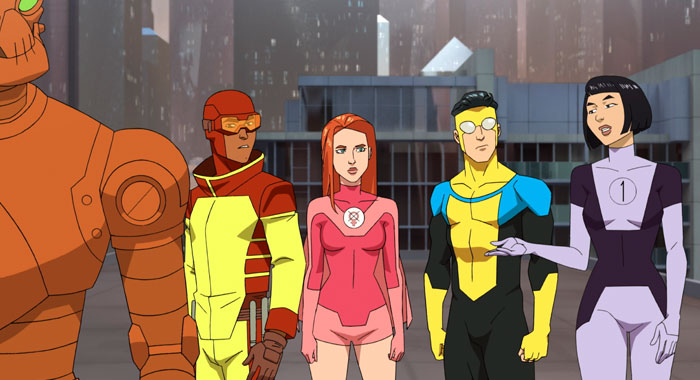 Beetz added, “I think for me, I feel like this [superhero] genre is really just another way to talk about the human condition, anxiety, and trying to find your place in the world, except the setting is just more heightened. And so in some ways you almost have more access to those raw emotions, which is something that Invincible does a lot. Obviously we’re not flying around and killing aliens [in real life], but I think that it is still, to me, just the story of how to deal with grief or guilt or killing off parts of yourself in order to continue to grow.”

And whether or not killing parts of themselves off is a requirement for growth, Kirkman hopes to see characters like Mark, Amber, and Eve continue to evolve over several seasons. “The idea is that we would be able to tell the story to its logical conclusion,” he said. He also hopes to include some of the comic books’ more epic moments at some point. “We don’t have a truly unlimited budget, but we are still able to pull off some really crazy things,” he explained. “I’m hoping that we get to see some superheroes burrowing through the center of a planet. There’s some big moments like that that I’m very excited to get to. And I think we’re going to do those moments justice.”