Plus, Cynthia Erivo brings the house down as Kristen Wiig and Maya Rudolph make a strong case for the Academy to bring back hosts. 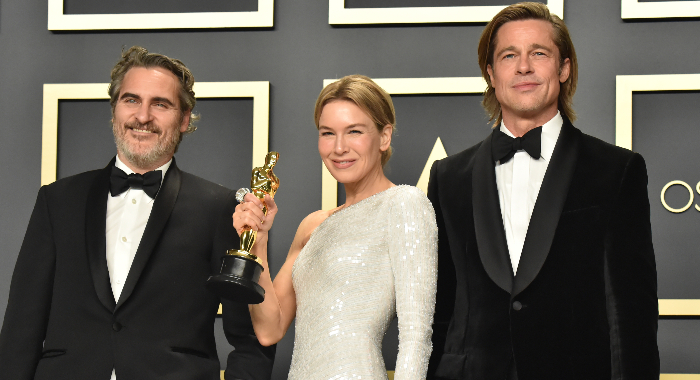 Another year, another Academy Awards – but this was one we don’t think we’ll be getting over any time soon. The 92nd Academy Awards will go down in the history books, with Bong Joon-ho’s Parasite becoming the first ever foreign-language movie to win Best Picture. And while Parasite‘s four wins were definitely major highlights of the host-free ceremony – not just because of Joon-ho’s promises to get royally wasted after the event – they weren’t the only big moments in a night that was marked by some genuinely funny presenters, megastar wins, and a feeling that the right people and movies were winning in the right categories.

The moments began before the ceremony itself, with Natalie Portman’s Dior cape making one of the few political statements of the night (with the exception of Brad Pitt’s first remarks upon accepting his award and Joaquin Phoenix’s speech, this was a fairly politics-lite Oscars). And then they kept coming thick and fast: incredible music performances, a superhero super team, and shock wins.

Check out our pick of the best moments of the 92nd Academy Awards below, and let us know what you thought of the show in the comments below. 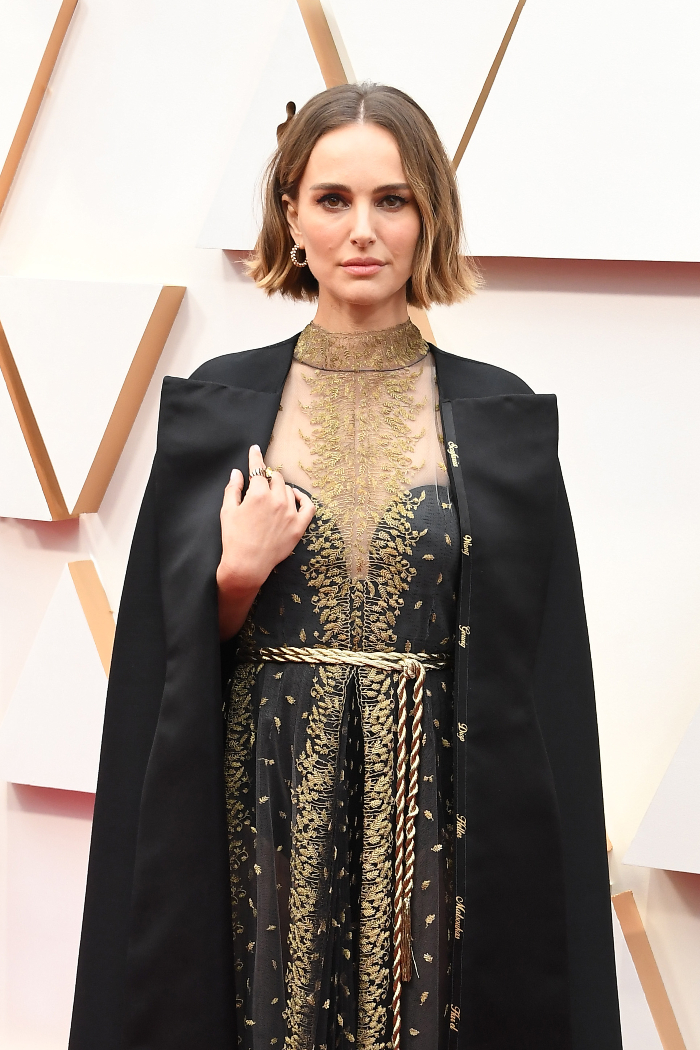 “Those men” might have been the ones congratulated by Issa Rae when the Best Director contenders were announced on nominations morning, but it was a group of talented ladies that was celebrated in a very special way on the red carpet on Oscars night. Natalie Portman arrived wearing a Dior cape that was embroidered with the names of a number of female directors who were snubbed by the Academy. Among those honored in Portman’s gold stitching: The Farewell director Lulu Wang, Little Women director Greta Gerwig, Atlantics director Mati Diop, A Beautiful Day in the Neighborhood director Marielle Heller, Portrait of a Lady On Fire director Céline Sciamma, and Honey Boy director Alma Har’el.

No host doesn’t mean no killer opening musical number. The 2020 Oscars kicked off with Janelle Monáe – joined for a spell by Billy Porter – paying tribute to some of the year’s best films. Monáe entered the stage on a Mister Rogers’ Neighborhood-like set, pulled on a red cardigan, and sang “Won’t You Be My Neighbor?”, before transitioning to her hit “Come Alive (The War of the Roses)” surrounded by dancers dressed as the Joker, Queen and Slim, Midsommar cultists, and other characters from the year’s movies. Most awkward moment: Monáe trying to get audience members like Leo and Kathy Bates to sing into her mic. Best moments: The awesome finale and the sight of a family of Us doppelgängers dancing on the Oscars stage.

Brad Pitt Tears Up As He Reflects On his Career, Accepting His Award for Once Upon a Time... In Hollywood (2019) 85%

Brad Pitt was a lock for Best Supporting Actor leading into the night: The only question was – after a string of delightful acceptance speeches during the season – what would he say when he won? Pitt delivered, and then some, with a heartfelt speech in which he dedicated his win to his kids, celebrated his Once Upon A Time In Hollywood director Quentin Tarantino (“one of a kind”), and paid tribute to his co-star, Leonardo DiCaprio, whom he hugged on his way to the stage. Reflecting on his own journey through the industry, from Thelma and Louise to now, Pitt told the room, “Once upon a time in Hollywood – ain’t that the truth.”

“Representation matters deeply, especially in cartoons,” said Hair Love producer Karen Rupert Toliver as she accepted the award for Best Short Film (Animated) and became the first Black woman ever to win an Oscar in any animation category. Toliver was joined on stage by writer, director, and producer of Hair Love, Matthew A. Cherry, who said he made the film to “normalize Black hair” and drew the crowd’s attention California’s CROWN Act, which would protect against discrimination based on hairstyling. Cherry, a former NFL player, dedicated the win to the late Kobe Bryant, saying, “May we all have a second act as great as his was.”

Some pundits – ahem, us – predicted these two wins, but safer money had Quentin Tarantino winning Best Original Screenplay for Once Upon A Time In Hollywood and Best Adapted Screenplay going to Greta Gerwig for Little Women. When Bong Joon-ho and Han Jin-won were announced as winners for Original Screenplay, the room erupted, with stars like Sandra Oh leaping to their feet to celebrate Parasite’s first win of the night. Joon-ho could barely contain his excitement, beaming as he stared at his award as if to say, “Is this really happening?”. Waititi dedicated his win to his mom – or, for Waititi, who signed off with the Maori greeting of “kia ora,” his mum – who introduced him to the book on which Jojo Rabbit was based, Caging Skies.

By far the best presenters of the evening – and let’s be honest, perhaps of any awards show we’ve seen lately – were Maya Rudolph and Kristen Wiig, who presented the awards for Production Design and Costume Design. They kicked things off with a bit in which they said they were too upset, too steamed, to carry out their duties, before revealing they were… acting! Why? To show the likes of Scorsese and Tarantino that they had the range to be cast in their films, of course: “We just wanted them to know we do more than comedy.” In their intro to the costume award, they then sang a medley of clothes-related tunes that ranged from “Vogue” and “Lady in Red” to Sisqo’s “Thong Song.” Hilarious. (The only person who wasn’t into it seemed to be singer Billie Eilish.)

If it is hard to believe that three-time nominee Laura Dern hadn’t won an Oscar before tonight, it’s even harder to believe that she is now the first and only Oscar winner in her family – a family in which dad is Bruce Dern and mom is Diane Ladd. With an emotional Ladd watching on, Dern thanked the Academy for “the best birthday present ever” and saluted her mom and dad. “Some say never meet your heroes,” Dern said, “but I say if you’re really blessed, you get them as your parents.”

Eminem Shows Up To Perform “Lose Yourself,” Because… Music?! 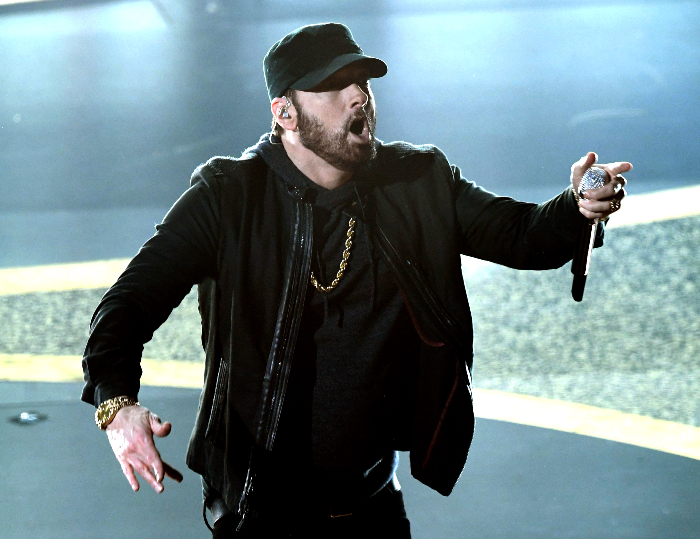 Following a fairly earnest montage tribute to the power of songs in film introduced by Lin-Manuel Miranda (who was himself introduced by Anthony Ramos), Eminem took the stage for a room-shaking – and heavily censored – performance of “Lose Yourself.” The song, featured in 8 Mile, won the Oscar for Best Original Song in 2003, making Eminem the first hip hop artist to win an Academy Award. Why exactly the song was performed tonight, though, remains something of a mystery. Still, the crowd got into it, with the likes of Kelly Marie Tran and Gal Gadot moving and mouthing along. The same could not be said for Martin Scorsese, who appeared to find the song a little, er, sleepy.

Not much to say about this: Just watch and listen as Cynthia Erivo performs the Oscar-nominated “Stand Up” from Harriet. The performance was followed in the commercial break by a well-timed trailer for Genius: Aretha, the upcoming History event in which Erivo plays Aretha Franklin.

The Cats Cast Shows They Have a Sense of Humor

Wearing two costumes that perhaps the filmmakers should have gone with for the actual film, Cats co-stars Rebel Wilson and James Corden presented the award for Best Visual Effects. “As cast members of the motion picture Cats,” said Wilson, “nobody more than us understands the importance of good visual effects.” You’ll remember that Cats went into theaters with its own effects unfinished.

Gal Gadot, Brie Larson, and Sigourney Weaver had us dreaming of universe crossovers when they took the stage to introduce composer Eimear Nooneis, who led the orchestra as it played the snippets from Best Original Score nominees and in so doing became the first female to lead the orchestra in the Oscars’ history. The trio said they were going to start a Fight Club, and that men were invited, but Gadot warned: “The loser gets to answer questions from journalists about how it feels to be a woman in Hollywood.” Weaver added, “All women are superheroes.” Fittingly, Best Original Score went to Hildur Guðnadóttir for Joker, who became the third woman to win in the category.

Joaquin Phoenix Gets His Oscar For Joker (2019) 68%, Quotes Brother River In Moving Talk of Justice

Joaquin Phoenix was quick to ask the crowd to “stop” as it rose to its feet after Olivia Colman – hilarious as ever in her intro – announced him as Best Actor for Joker. Phoenix was visibly moved by the honor, and took the opportunity on stage to talk about the unifying thread between so many political movements – whether fighting racism or gender inequality or fighting for queer, indigenous, or animal rights ,”we’re talking about the fight against injustice,” Phoenix said. He went on to talk about our responsibility to “all sentient beings and the environment” and finished his remarks, choking up a little, as he quoted a lyric written by his late brother River: “Run to the rescue with love and peace will follow.”

It was not the most surprising win of the night, but it was one of the most moving. Renée Zellweger accepted the award in tribute to the woman she plays in Judy: “Miss Garland… this is certainly for you.”

Parasite made history as the first foreign-language film to ever win Best Picture at the Oscars, crowning the evening with the night’s biggest award having already taken out Best International Feature, Best Original Screenplay, and Best Director for Bong Joon-ho. When Joon-ho accepted South Korea’s first ever win – off its first nomination – for Best International Feature Film (formerly Best Foreign Language Film) earlier in the night, he called upon the cast and crew of Parasite to stand and for the crowd to applaud their work, saying he was proud to be the first recipient of the award under its new name. He finished that acceptance speech in English, saying, “I’m ready for a drink tonight,” and later, accepting the award for Best Director, said, “I will be drunk until next morning.”

During that speech, Joon-ho paid tribute to his fellow directing nominees, with particular affection given to Martin Scorsese, whose films Joon-ho said he had studied and inspired his love for film.