Stars Bob Morley, Eliza Taylor, Lindsey Morgan, Marie Avgeropoulos, and more reveal the first details about what the survivors will encounter when they land on a new planet in season 6 of the CW series.

Everything old is new again when The 100 returns to The CW with its sixth season on Tuesday.

But that’s one of star Lindsey Morgan‘s favorite aspects of the sci-fi series, she said when Rotten Tomatoes visited the set of the series back in November.

“We really concentrate on world building and building these new environments and then we blow them up,” she said.

Indeed, after crash-landing the titular group of 100 teens on a post-apocalyptic Earth in its first season, the show has specialized in upending its status quo each year. Its core team of teen miscreants-turned-explorers faced new difficult situations each season as they attempted to make life thrive on a radiation-soaked Earth. Season 5 sped forward six years as some retreated to a space station above Earth and others defended the last safe zone on the planet. But when that attempt failed, the survivors had only one choice left: find a new planet.

Which, of course, they did. A planet a previous Earth ship set out for and, presumably, will support human life. 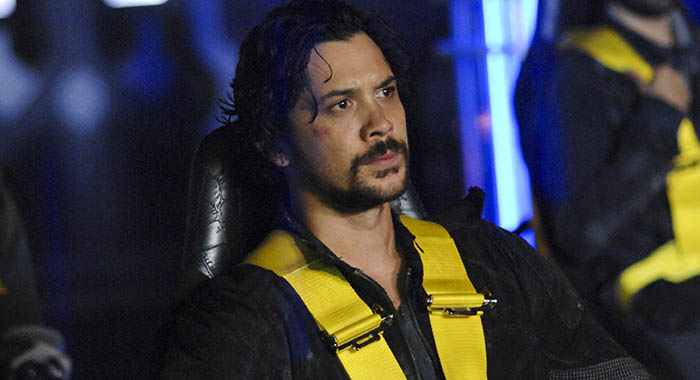 Details on this brave new world are still deeply classified, but Bob Morley, who plays key survivor Bellamy, suggested fans “can gather something about the new planet based on what happened at the end of last season.” And while there is a sense that the show has been reborn, he noted the characters may also experience a sense of déjà vu as they explore the new world.

“This planet is completely different from the Earth we knew,” said Marie Avgeropoulos, who plays Bellamy’s sister, Octavia. “There are a lot of sci-fi elements to this planet. It makes it really challenging to survive.” Instead of various rival clans as seen on Earth, she said the survivors will encounter one set of new people immersed in the new sci-fi trappings.

“The planet’s gonna be nuts,” said Richard Harmon, who plays ne’er-do-well Murphy. “It will suspiciously look like Vancouver, but they did a great job giving the planet a cool look this season.”

The new status quo sees the survivors reunited on the same side after years of personal and political conflicts. As Morley noted, Bellamy and Clarke (Eliza Taylor) will have to deal with being leaders of the same group once again despite all the time they were on opposite sides of warring factions.

“They have to take up that mantra from Monty: ‘Do better,'” he said.

In the season 5 finale, Monty (Christopher Larkin) stayed awake aboard the Eligius IV while the others went into cryosleep hoping to wait out the decade required for Shadow Valley to become habitable again. Unfortunately, when that decade passed, Monty and fellow survivor Harper (Chelsey Reist) saw little change to the radiation levels around the planet and he began decoding the mission files of the Eligius III, a ship sent out to find a hospitable and oil-rich planet out in the galaxy. The two lived long lives together, even having a son. After Harper’s death, Monty chose to remain awake until he could find the route the Eligius III took, eventually dying of old age and hoping his friends would be better people when they settled the world he found for them. 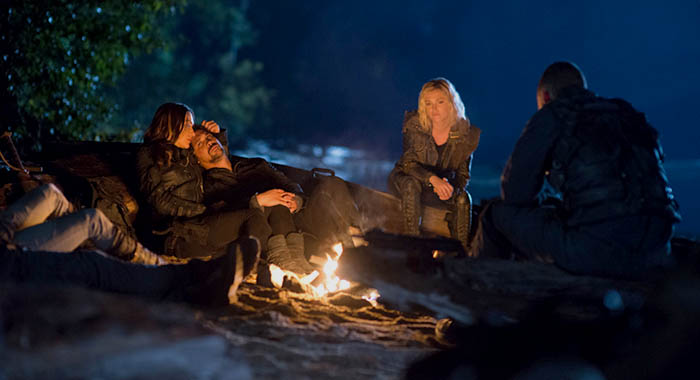 “Everyone takes Monty’s dying wish differently,” Morgan explained. “It has a resounding impact on us all. He was very much the core of the family and for him to sacrifice his life was such a gift.”

In the case of Morgan’s Raven, it leads her to take a more active role in their coming exploration of the new world.

“A crisis is on hand in this new set of circumstances,” she said. “Being the brains of the operation and figuring out the intel, she has to figure out how to assess the planet and how to survive.”

Presumably, this means she will be one of the first to wake up from cyrosleep, but the cast was oddly mum about who wakes up first. Instead, Morgan joked, “there’s been peace because we’ve all been asleep.”

While Harmon noted that the group is “as cohesive as a unit as we’ve ever been” at the start of the season, old wounds will quickly open up as the various characters awaken. For Raven and Murphy, that means injuries sustained across the fifth season have not healed after 125 years. In fact, Harmon said Murphy’s injury allows him to relate to Raven a little better — at least when he first wakes up. But for Octavia, it means her actions as Red Queen will haunt her.

“She spends a lot of the time this season dealing with her interior demons and the group has a lot of ill-feelings toward her,” Avgeropoulos said. “She feels isolated.”

Additionally, the relationship between Octavia and her brother will be “interesting” considering as Octavia threw Bellamy in the Pit, which is going to take a little bit of time to overcome.

“There’s an interesting thing that happens between them this season that’ll shock the viewers,” she said. “I’m really excited for everybody to see it.”

Added Morley, “It will take some time for them to be able to address the situation, and a lot of their own healing before they can speak about it or it’s amicable or for it to grow into a more healthy relationship.” 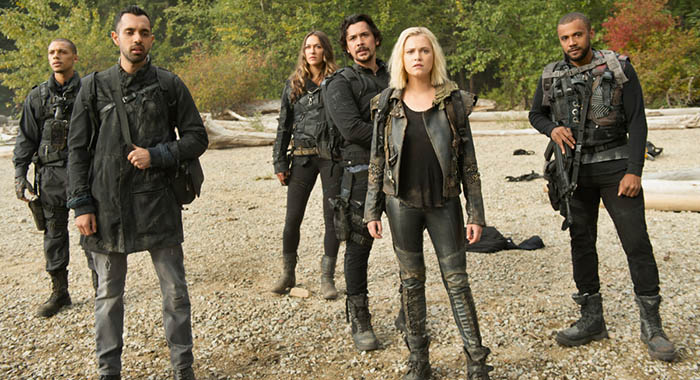 That fractious sibling relationship may also put some pressure on Bellamy’s relationship with Echo (Tasya Teles). On that front, Morley said Bellamy and Echo are still “very much in love,” but evaded elaborating on it to point out the show will finally spend some time filling in certain gaps in her backstory.

“I’m super excited about that,” Teles said. “It’s one of the things I’ve been hoping for and asking for the last couple of years. I had ruminated on her backstory and the opportunity to share that for the first time is really exciting.”

She suggested Echo’s past was not “roses and picnics,” but her unique trauma may lead to something she can contribute to the group as they face the new world. At the same time, she said Echo is still learning to adapt to her new surroundings and trying out a new way of life.

But when asked about Echo’s relationship with Bellamy — and the fact he has to deal with Clarke in close quarters again — Teles said, rather enigmatically, “She understands loyalty better than anyone else, she understands certain relationships are sacred. So there’s a lot of support within them all.” She added that Echo also feels a certain indebtedness to Clarke.

And when Morley was asked if there was a chance for Bellarke shippers to be pleased this year, he joked there is “as much of a chance as all those other years.”

Among their other duties in exploring the new planet, the pair are tasked with looking after Monty and Harper’s son, Jordan (Shannon Kook). Though an adult, there is something childlike about him.

As Morley put it, “Jordan is such an interesting character. He spent his whole life on a spaceship with his parents.”

Spending 26 years with only his parents to talk to would drive anyone a bit insane, but Kook is a “great addition to the cast” and Jordan is a new type of quirky character the show hasn’t seen before.

For his part, Kook said, “It’s befuddling for the heroes to encounter this idealistic and optimistic personality who reminds them of their old friend.” 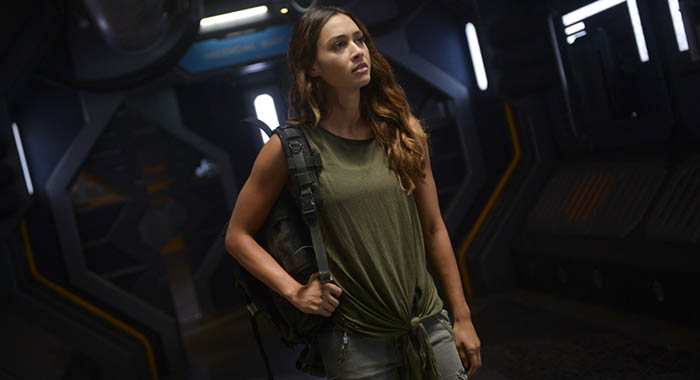 Unlike their childhoods on the Ark and their adulthoods-by-fire on Earth, Jordan was raised in the “harmony of his parents” even as he trained to join the others on their exploration of the new planet.

“There are some parallels between him and Octavia [who also grew up separate from the others], but the difference in that is that he wasn’t growing up in a time of tension.” Unlike the fear Octavia knew, Jordan has always enjoyed peace. It means planetfall will be “quite a jolt to his system.”

But Jordan, not unlike the original 100 when they first arrived on Earth, will approach this new world as a series of firsts. As Kook put it, Jordan notes the moment he breathes fresh air for the first time and “sees a woman who isn’t his mother.” He also faces the challenge of working with the people he idolized growing up, challenging their jaded worldviews, and feeling an obligation to protect his new family.

“It’s a tall order for a young lad who’s never met anyone before,” the actor said.

Nonetheless, Morley and Teles said Bellamy, Clarke, and Echo feel a certain protectiveness for Jordan immediately. And while that sense will be reciprocated, Kook admitted Jordan has one fave among the group: Murphy.

“He throws your expectations,” Kook said.

Added Harmon, “I was his favorite growing up, which is very valid. But be careful what you wish for when it comes to meeting your legends.”