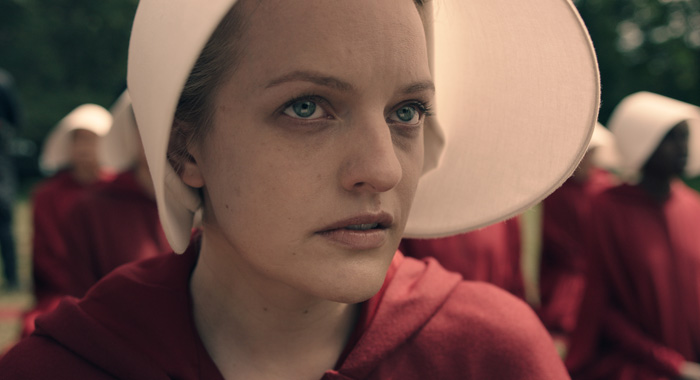 Hulu presented a day of panels to the Television Critics Association on Saturday, January 7. Panels included the upcoming adaptation of The Handmaid’s Tale starring Elisabeth Moss and The Path season 2, plus announcements about upcoming Hulu shows. In addition to Hulu news, some talent from Hulu shows offered news about their other projects including Fargo, In the Heat of the Night, BoJack Horseman, and Better Call Saul.

The Handmaid’s Tale Hulu Series Could Go Beyond the Book

Hulu presented a panel on The Handmaid’s Tale, based on the Margaret Atwood book and starring Elisabeth Moss. Executive producer Bruce Miller said he could keep the series going indefinitely. There’s plenty of book to dramatize, but also ideas to take the story in new directions suggested by Atwood’s text. “The more we look into that world, the more of a further horizon we see of stories that we can tell,” Miller said. The Handmaid’s Tale premieres April 26.

It was big news when Joseph Fiennes was cast as Michael Jackson in Elizabeth, Michael and Marlon, a 20-minute satirical sketch due on Sky UK later this year. Fiennes, who costars with Moss in The Handmaid’s Tale, told Rotten Tomatoes he did not wear prosthetics to look more like Jackson. Based on the urban legend that Jackson, Marlon Brando, and Elizabeth Taylor took a road trip together after 9/11, Fiennes calls it a satirical sketch comedy: “It’s fluff.”

Hulu is developing a Foxy Brown pilot to star Meagan Good as the blaxploitation character made famous by Pam Grier in the 1974 film. Craig Erwich, Hulu’s senior vice president of Programming, told Rotten Tomatoes the proposed take blends a contemporary character with the film’s style. “It’s about female empowerment, but with the same unapologetic, I would say retro style,” Erwich said. He added that writers have not begun scripting, so Foxy Brown is “a way off,” but would be an hour long show with “an appropriate level of action.”

Josh Hutcherson stars in the Hulu comedy Future Man created by Seth Rogen and Evan Goldberg. The Hunger Games’ Hutcherson plays a gamer who gets to travel through time to save humanity. “He’s a badass geek,” Erwich said. “Becoming badass is his journey. It’s not where he starts. It’s where he ends up.” Future Man premieres later this year.

Erwich also discussed Hard Sun from Luther creator Neil Cross, which was announced on January 6. Hard Sun, a pre-apocalyptic crime drama, begins with the discovery that the world is ending and explores the trouble policing people who no longer care if they get caught, Erwich said. “And what’s the point?” Erwich added. The six-episode series stars Jim Sturgess and Agyness Deyn.

In the Heat of the Night Reboot Script Delivered, Mostly New Characters

A reboot of the cop drama In the Heat of the Night, which was previously adapted into a TV series in 1988, was announced in 2014. Executive producer Warren Littlefield told reporters he just delivered a new script on Friday. Virgil Tibbs is still the protagonist, but the rest of the characters are all new to the latest adaptation, which is set in Mississippi. Even if the current script goes, Littlefield thinks it won’t come together fast enough to make a fall premiere. MGM is producing the series, reported to air on Showtime.

FX will present a panel on Fargo’s third season next week. Executive producer Littlefield, who will return for that panel, gave reporters a taste of how the new season would look. Set in 2010, it will be the most contemporary Fargo yet. “Every Fargo has its own color palette, its own tone and its own space,” Littlefield said. “Each one is unique. We’re very mindful of not repeating ourselves. That would be too easy.”

Aaron Paul, who produces and stars in Hulu’s The Path, also produces Netflix’s BoJack Horseman and provides the voice of Todd. Paul said the fourth season will show what turned BoJack (Will Arnett) into the self-destructive horsemanchild he is today. Previous seasons have hinted at BoJack’s dysfunctional childhood with abusive parents, but season 4 will go deep into BoJack’s past and psyche. He also teased an episode that “takes that big swing,” like season 3’s “Fish out of Water.” The acclaimed “Fish” episode set the bar by taking place underwater with almost no dialogue. Paul said he’s already recorded the fourth season finale. Season 4 is due this summer on Netflix.

Fans of the Breaking Bad prequel wonder if Jesse Pinkman would show up in Saul Goodman’s world. Aaron Paul is up for it, but creators Vince Gilligan and Peter Gould have not mentioned an opportunity. Paul even saw the Better Call Saul team on Friday at the Four Seasons Hotel, when he was going to a meeting, and they were coming from the AFI Luncheon. Paul asked when he can come back to Albuquerque for a wardrobe fitting, but “it’s still up in the air,” Paul said.

During a panel for The Path, creator Jessica Goldberg said season 2 explains more about the fictional cult of Meyerism. These developments, in turn, make Sarah (Michelle Monaghan) more skeptical about the religion. Goldberg said Sarah, who was a zealot in the first season, would contradict her previous beliefs. The Path returns January 25 on Hulu.

Hulu began as a streaming service for current and syndicated shows. On that front, it just scored the classics sitcom The Golden Girls. Golden will premiere on Hulu on February 13, in honor of Galentine’s Day, the name a Parks and Recreation episode bestowed upon day before Valentine’s Day.