What We Could See in Sweet Tooth Season 2

From its curiously involved narrator (James Brolin) to its leading protagonist, human-deer Hybrid child Gus (Christian Convery), Sweet Tooth surprised viewers with its mix of post-apocalyptic dread, boy’s adventure, and the brightly-colored hope of a world slowly repairing itself.

At only eight episodes, the series — based on the comic book by Jeff Lemire — left us on something of a cliffhanger, but enough of the characters and stories have converged to give us some idea of where the program will go next.

Rotten Tomatoes had the chance to pose our lingering questions to Lemire, actor Neil Sandilands (who plays antagonist General Abbot), and executive producers Jim Mickle and Beth Schwartz about some of the program’s locations, serendipitous moments, and where it might go in a potential second season.

Why Is the Essex County Zoo So Important in the Show? 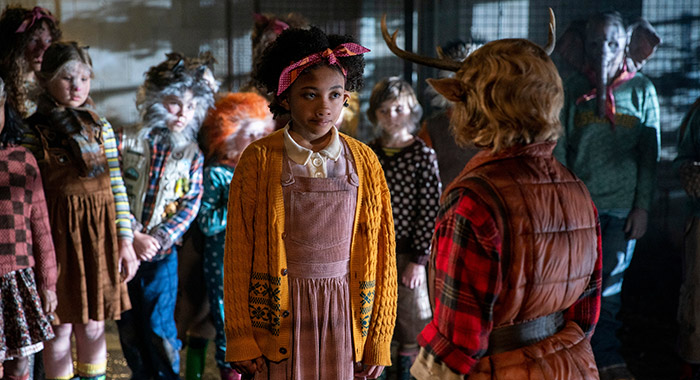 One of the more unexpected elements of the series — particularly for readers of Lemire’s comics — was the sudden importance of the Essex County Zoo that Aimee (Dania Ramirez) and Wendy (Naledi Murray) were using as a home and sanctuary for Hybrids. Even the name is a surprise as it nods directly to Lemire’s earlier Essex County trilogy of graphic novels — a detail Lemire said eagle-eyed viewers will spot as early as episode 2 before it gets a prominent shot in episode 5.

Beyond its name, the zoo also serves as part of the show’s fairy-tale tone and way to reconcile the program’s relocation of events from Lemire’s home country of Canada to the Midwestern United States.

“Obviously it has a slightly different geography than the comic book because of the Nebraska angle,” he explained. “[But] once we got to New Zealand, it was like, ‘This doesn’t look like Nebraska. How do we [do this?]'”

Soon, the production found “our own real logic or geography” as they “fairy tale-ize” the landscape between Yellowstone National Park, Colorado, and an Essex County, which is a cousin — by way of Lemire’s “rich universe” — to the one he grew up in.

“It is magnificent,” Sandiland said of the set. “It really feels like you’re in a theme park somewhere.”

Although some of the exteriors were shot at the Auckland Zoo, much of the Essex County Zoo was created on a sound stage. The actor recalled a major shot when Abbot first arrives with the Last Men militia. “They had one of those huge extension arms [for the camera]. The vehicles [are] moving in, going all the way, pulling back, and then [the camera goes] all the way across to where Abbott is standing on top of that structure, facing the zoo. That was done on a sound stage. So just to give you an idea of the enormity of it.”

In terms of the narrative, the Zoo will seemingly take the place of the Last Man camp featured in the comic book. That may be the reason why the set is so lovingly rendered by a design team Sandilands called “just next level.” Although, he declined to confirm if the Last Men will be camping there while Dr. Singh (Adeel Akhtar) attempts to process the cure.

Of course, any details of a potential second season are unknown to him and, as it happens, he chose not to read ahead in the comic in order to “make the discovery” of the story as the production progresses; a valid acting choice that may also help explain one of Sandilands’ more distinct visual departures from the character as drawn by Lemire.

Why Does General Abbot Look So Different from the Comic? 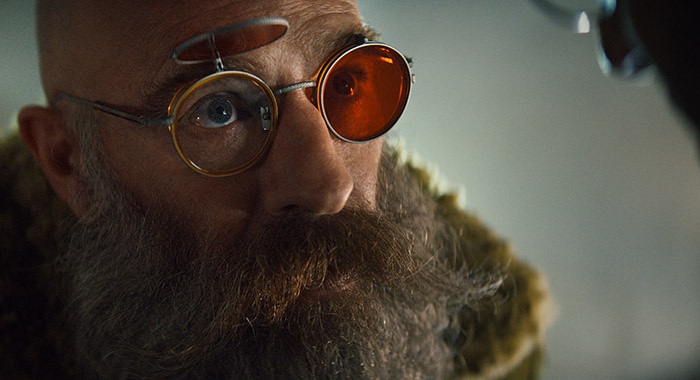 When we spoke to Schwartz before the series debuted earlier this month, she said it was possible the strikingly-long beard Abbot sports may have been Sandilands’ own lockdown beard, a supposition the actor partially confirmed for us.

“Lockdown had quite a bit to do with it,” he said. “I did another little local project [just before Sweet Tooth] where I sported the beard. And I thought, ‘It’s definitely a look, right? There’s something going on there.’ And I just decided to keep growing it. And little did I know that it becomes quite a thing.”

As it turns out, the hair and makeup team were supportive of the choice, going so far as to email Sandilands before he flew to New Zealand to make sure he kept it.

Mickle and Schwartz were also supportive, though some discussions about the beard took place.

“It is a collaborative thing. I think a lot of people have to buy into the look. And we had time to play around with it,” he said. “Jim sent me some of the images that we did on set with a full-on hair, makeup, wardrobe test and when I got those stills, I was really rather surprised in a good way. The look was just so striking with the beard, with the glasses, with the lighting, with the color, everything. So that came as a pleasant surprise. And I think an actor draws from a lot of external input stimulus prior to going on set and starting to build the character.”

Another aspect of the character which may come as a surprise to viewers is his composure — something often lacking in post-apocalyptic warlords.

“Deliberate restraint is always a good thing,” Sandilands said. As we’ve seen in his encounters with Singh, Singh’s predecessor, Dr. Bell (Sarah Peirse), and even the words he said to Aimee from across the Zoo, he presents himself as someone who doesn’t need to raise his voice to get his point across. And as Sandilands sees it, the character strikes a certain mystique. “He’s intriguing enough that you would want to know, like, who the hell is this f—er? What is he really capable of? How deep can we go? I think there’s a lot of miles in that tank left to be explored,” he said.

Is It Serendipity or Is It Supernatural? 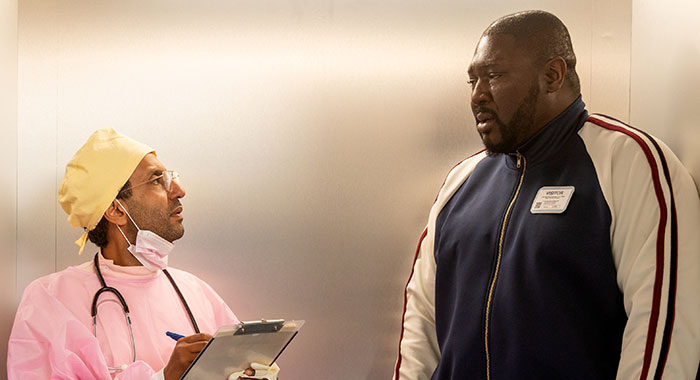 Another element the show may explore in a possible second season — Netflix has yet to confirm another is on the way — is the part serendipity seems to play in the story. Consider the way Jep (Nonso Anozie) and Singh had that conversation in an elevator which eventually leads to him accepting Gus ten years later or the way Bear (Stefania LaVie Owen) and Wendy relate to one another. Then there’s the big one: the way the fickle hand of fate has seemingly led all of the characters in the direction of Essex County for what comes next. When asked if it is all coincidence or if some force is at work behind the scenes, Mickle simply raised an eyebrow.

“James Brolin is behind the whole thing,” Lemire joked.

Although, that joke definitely leads to one possible answer. From the eight episodes so far, we’ve heard Brolin’s narrator refer to himself in the first person, have intimate knowledge of the characters pasts, and bind their scenes together thematically before any of them besides Aimee walked near the Zoo. He could be some supernatural force. He could also be Gus in the far future writing all of this down in the storybook style of his father, but if Lemire feels comfortable enough to joke about the narrator’s place in the story at this point, we’ll assume his real role in the story is far more surprising.

Then there is also a supernatural angle if viewers want it: Gus’s hallucinatory dream in the field of flowers which seems to foretell his meeting with Abbot. The mention of it led Mickle to raise his eyebrow again and say, “Gus is tapped into whatever Gus is tapped into, I guess.”

“You could ask the same question about Jeff’s comic books,” Schwartz said. Indeed, comic book Gus has many more dreams than his TV counterpart by the time he first meets Singh — and all without the aid of the flowers growing over the dead. All of them contain at least a drop of prophecy, although we can go back to Lemire invoking Twin Peaks and the way that show always kept a little deniability in the mysticism on display. At least until the third season, anyway. But it is definitely something to keep on the board should Sweet Tooth get its second season.

Beyond whatever guided the characters to Essex County, there were a few other possibilities the producers were willing to broadly discuss for future seasons. For one thing, more flashbacks — specifically for Birdie (Amy Seimetz) and Richard (Will Forte).

“There’s definitely more room,” Schwartz, who wrote the Birdie and Richard heavy episode 7, said. “It was so much fun tapping into what Richard was like before the pandemic; and Birdie. And they’re Gus’ parents, so there’s more story there to tell.”

Beyond that, we’ve yet to see how Jep wandered from the hospital in search of his wife and child to becoming a Last Man — a story harrowingly rendered by Lemire in an early Sweet Tooth issue — or some other Pre-Crumble moments for Singh and his wife Rani (Aliza Vellani).

And then, of course, there’s Abbot before the Crumble.

“I know that the creators are, wherever they are, they’re in a room, and ideas are being thrown around,” Sandilands said of the possibility. “I mean, me as Neil, I’d love to see it. Looking at the series, I’m intrigued by this fellow, and where he can go.”

Meanwhile, all of those shots of the portrait depicting a tall ship breaking the ice in episodes 7 and 8 have to mean something right? Mickle only offered a “maybe” when asked. Considering how closely the ship is associated with Birdie, it’s not outside the realm of possibility we’ll see it explained — or even the ship itself — if Sweet Tooth continues.

“I think what Sweet Tooth presents in metaphorical value is the absolute necessity for us to be able to form new syntheses, new understanding,” Sandilands added. “Meaning to suggest that we actively have to incorporate anomalous factors and not be scared of synthesizing the new.”

Between the Hybrid children, the implications of Gus’s birth, and the metaphysical undercurrents of the series — to say nothing of its hopeful tone — we hope to be synthesizing new elements of Sweet Tooth for some time.