John Wick better watch out — Hondo Harrelson is back

Rotten Tomatoes interrogated Moore before the premiere of S.W.A.T. to find out exactly how he’s going to get those whoas. 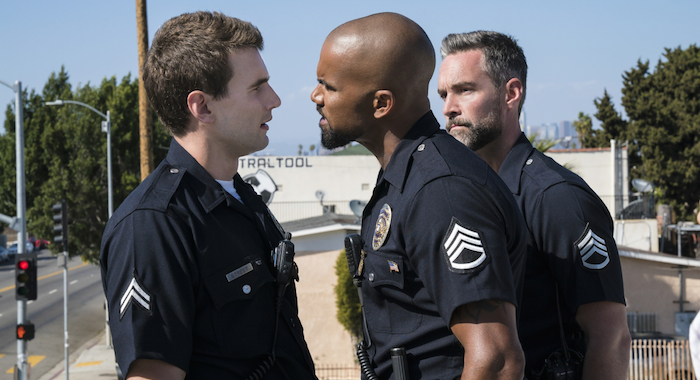 The cast of S.W.A.T. are training on the same shooting range where Keanu Reeves trained for John Wick. Other stars like Michelle Rodriguez and Jason Bateman train there, too, but Moore’s personal goal is to beat Reeves’ course times.

“I’m not as good as Keanu Reeves yet, but I’ve been practicing and training at the same location,” Moore said. “From what I hear, he’s a junkie. He loves it. It is a thrill. My times are getting faster and faster. I’m trying to catch Keanu, but he’s had a little more practice. I’m right behind him. He’s still got me beat, but I’m right behind him.”

Moore has been on the course, he says, on and off for six months. He’s got Reeves in his sights.

“It depends on the course,” Moore said. “My fastest time in one particular course, I think, was 28 seconds and Keanu’s time was 17 1/2, something like that. I’m creeping up to him.”

2. KIDS WILL HUM THE THEME SONG 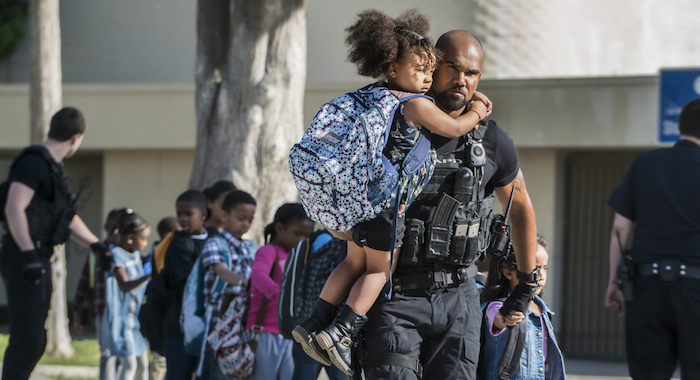 Moore wants S.W.A.T. to be a show families watch together and discuss with their kids. Parents may remember that hummable theme song, but once kids hear it, Moore expects them to start playing S.W.A.T. with their friends.

“Hopefully we’re going to have millions of people and kids running around their backyards playing Hondo and Deacon in the street going, ‘Na na na, na na na,” Moore said. “It’s the exclamation point that makes this show as fun as I know it’s going to be.” 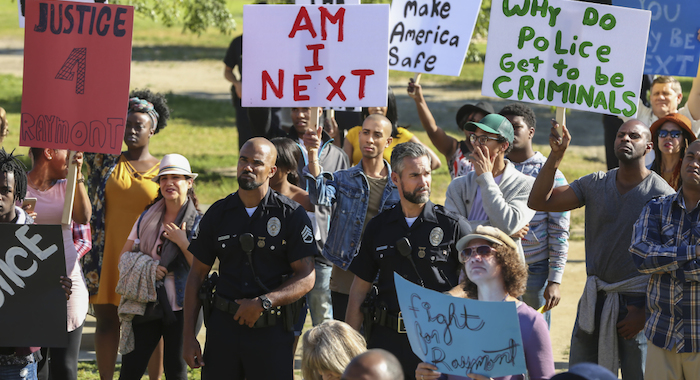 S.W.A.T. is going to give you an hour of excitement every week, but then it’ll give you something to chew on until the next episode. The pilot involves the police shooting an innocent child, mirroring many of the issues surrounding real-life law enforcement. Moore promises juicy topics on every S.W.A.T. episode.

“I don’t think we can change the world or change the game or find an answer to racism and fear and prejudice, but I think we can create an argument,” Moore said. “We can create a debate. We can help bridge that gap and raise some questions and create some understanding. It’s just a TV show so that’s a big, bold goal but I really believe people are going to go wow.”

Debate means both sides, and that means half the audience may completely disagree. That’s a risk Moore is willing to take.

“You may not agree with our depictions or our arguments, but you’ll understand it,” Moore said. “All we want to do is show our take of the men and women of blue and the civilians, and there’s humanity on both sides. If we can create a little more understanding, a little more patience while having a really good time, that’s going to be incredible to do with a television show.”

4. THEY WON’T TAKE A BREAK AFTER THE PREMIERE 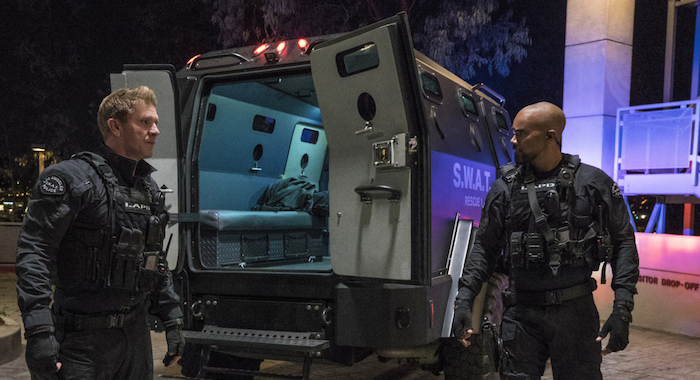 The first episode of S.W.A.T. is directed by Justin Lin, who did The Fast and the Furious 3-6 and the action has been a strong point in many fresh reviews (though not all). If you came for the action, Moore promises S.W.A.T. won’t let up, even without Lin at the helm each week.

“Obviously in television you can’t spend $10 million every week, but they are spending a nice healthy amount of money to keep the integrity of the show so that we can bring the action,” Moore said. “We’re using three cameras, so you get all the angles. We had 16 days to shoot the pilot. Now we’ve got eight days to shoot each and every episode.”

Moore can vouch for the quality of S.W.A.T. because he’s been on “regular” television shows that don’t need to blow the roof off every week. S.W.A.T. is a step above.

“I worked on Criminal Minds for 11 years, and I’ve done a whole bunch of stuff in between for 24 years, but I’ve never been on something that felt this way,” Moore said. “It does not feel like we’re making a TV show. It really feels like we’re making a movie. I’m not going to say it’s never been done, but I do really strongly believe this is a fresh look. This is a new look. This is raising the bar of the way television is presented.” 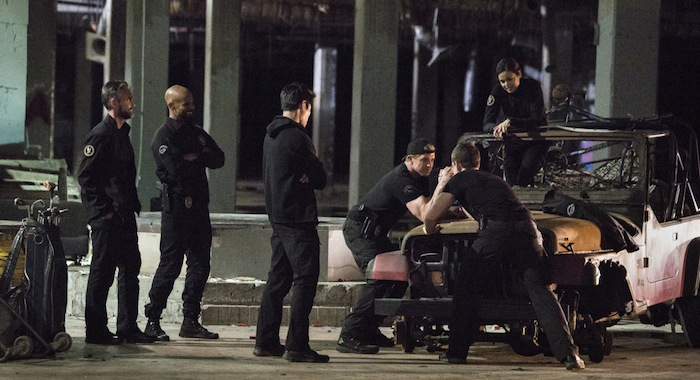 So they’ve got the theme song, they’ve got Hondo, Luca, Deacon, and Street. Fans of S.W.A.T. may settle in, until the new show drops them on the streets of 2017 Los Angeles.

“For the folks old enough for the ’70s show, for the folks who watched the movie 15 years ago, it’s the same name,” Moore said. “I joked it is the same font, and it’s the theme song with what I call a little more stank in it. Those are the only similarities. I really believe it’s going to give people a little bit of what they remember of S.W.A.T., but it’s also going to surprise people in a big way because they’re not expecting the type of content and the type of gritty, grimy nature that this version is bringing.”

Moore hopes that in addition to portraying the real issues involving crime and law enforcement, S.W.A.T. can also offer hope for real-world solutions. 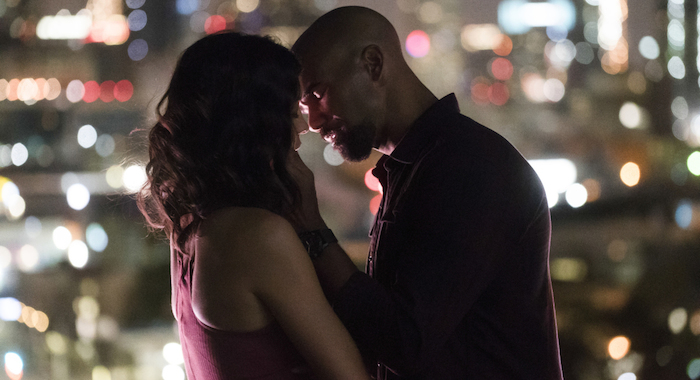 Stephanie Sigman plays a new character, Jessica. When she gets promoted at the same time Hondo takes over the S.W.A.T. team, it throws a wrench in their relationship. She doesn’t want to mix business with their personal lives.

“Here’s Hondo who’s overcome the odds to get to the position that he’s in, and the Jessica character, a Hispanic woman in a leadership role — all the adversity that she’s had to overcome, all the politics that she’s had to play by,” Moore said. “Here are two people who have scratched their way to be in a position of power to possibly make change, and then it’s frowned upon within the system to have any relations.”

With their highly specialized fields and common struggles, they may be the only people who understand each other. They may also be risking their careers.

“These two just identify each other and these two are kind of a safe place for each other, a safe place of understanding and companionship,” Moore continued. “But all the while, they have to keep it a secret because it could be detrimental to both their careers so they’re playing with fire, but it’s a need that they both feel they have, so they’re running that risk.”

Actors always love to talk about their months of martial arts training before a movie, or the ride-along they did with real police officers. Moore just might have other action heroes beat.

“All of us went into it with the positive mindset that we were going to get picked up because we just knew what we had created,” Moore said. “We started training really the day after we stopped the pilot. It’s fighting, it’s hand to hand combat, it’s cardio, it’s a lot of tactical stuff. Then when all that was done, we kind of woke up one day and it dawned on us, ‘Oh, we still have to act. We have to memorize words and tell stories.’”

Don’t worry, they still learned their lines and hit their marks, but Moore and his costars have plenty of experience in that. They devoted more time to the S.W.A.T. part because real S.W.A.T. teams live it.

“There was so much focus on getting the maneuvers correct, because we don’t want people to watch the show and look like actors with guns,” Moore said. “We want this to feel as real as it is because it’s an action show, it’s a good time, it’s a thrill ride, but it’s intense.”