The star of DC Universe's latest series teases her character's Shape of Water-esque relationship and why reading Alan Moore's comics got her emotionally invested in the series.

The latest iteration of Swamp Thing, debuting Friday on DC Universe, is perhaps the most ambitious and faithful adaptation of the comic book series yet — which is surprising, considering it’s one of the more surprising comic book properties to be adapted over the decades into film and television.

The character was created by Len Wein and Bernie Wrightson in 1971 for a one-shot story in a horror anthology series, and the pair quickly revamped it to exist within the DC Universe of the 1970s while introducing a number of horror elements to that world. It was an innovation at the time, as horror was verboten in mainstream comics during the mid-1950s and ’60s. The duo also introduced Abby Arcane, an environmentally conscious Transylvania immigrant with a unique empathetic ability. She and her eventual husband, Matt Cable, would continue to be part of the Swamp Thing supporting cast for years to come — although Matt made his way to The Sandman in the 1990s as the Raven Matthew — while the series continued to innovate within the confines of DC Comics’s superhero multiverse.

In film and television, the title character found surprising success with Wes Craven’s 1982 Swamp Thing feature film starring Dick Durock as the creature and Adrienne Barbeau as an amalgamation of Abby and Matt named Alice Cable. It eventually led to the 1989 sequel The Return of Swamp Thing, with Heather Locklear as a very loose adaption of Abby Arcane and Durock returning as Swamp Thing, and a 1990s television series with Durock as the title character once again and Kari Wurher as a character called Abigail for just 10 of its 72 episodes. There was also a short-lived animated series to support an equally short-lived Swamp Thing toy line. 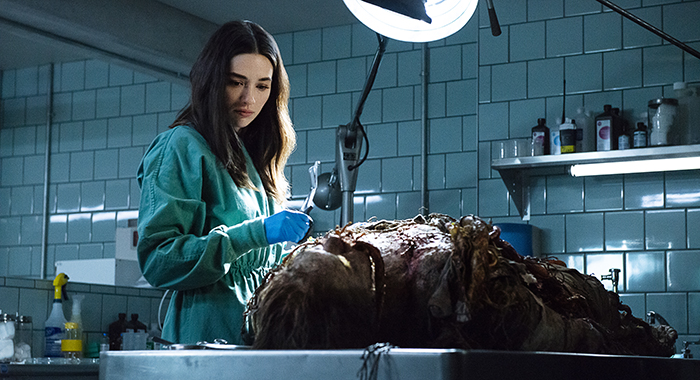 Each of those projects featured a modest budget and took liberties with the source material, but DC Universe’s Swamp Thing adheres much closer to the comics. For one thing: Abby is finally a major character — so major that it would be safe to say the series is more about her than the title character. And as star Crystal Reed told Rotten Tomatoes recently, the character will get her deepest rendering since the original comic books even if she is a far cry from the empathic Transylvanian immigrant we first met on the page.

As the series begins, citizens of Marais, Louisiana — Abby’s hometown in the show — come down with a mysterious illness. Some of the victims even start spitting up vines and leaves. Abby, a doctor for the CDC (“a really great one at that,” said Reed), heads home to examine the sick residents.

“I think the big draw for her is trying to go home and really help figure out what’s going on,” Reed said. And while the disease brings Abby home after a decade or so away, she has another reason to take the assignment personally: “[She wants to] make amends, and try and work out what happened with her best friend and her ‘new’ family.”

That new family, the Sunderlands — Avery (Will Patton) and Maria (Virginia Madsen) — controls much of Marais’ economy and took Abby in when her own parents passed away. Unfortunately, a car accident while Abby was in high school broke her bond with the family and sent her out of town.

“She blames herself for it,” Reed said of the accident. “Maria Sunderland blamed her as well, and there was this big falling out. And she ended up leaving Marais feeling like she had absolutely no one and couldn’t trust anyone.” 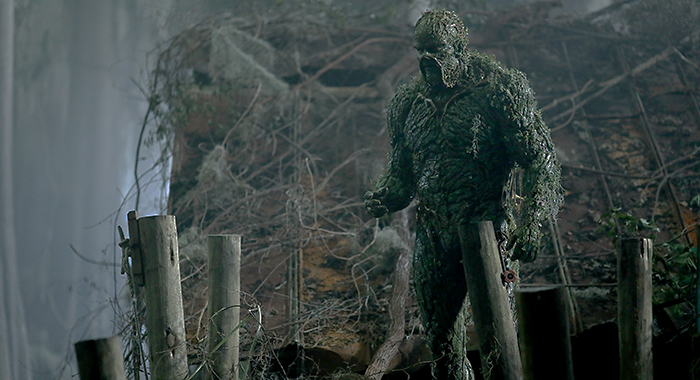 It is an altogether new story for Abby Arcane, who spent many years in the comics carried along by the force of the plot. In the 1980s, she became a central figure in the Swamp Thing series written by comic book legend Alan Moore and illustrated by artists like Steve Bissette and Rick Veitch. The character became more emotionally rich than any of her portrayals in media during the 20th century and Reed wanted to honor what she found on the page.

“It was really fun to bring her to life and make her my own, and also make sure that she had a lot of the same characteristics,” she said. There was one aspect she wanted to keep from the comics, but could not realize on screen: Abby’s vibrant white hair. “I thought the fans would really love it,” she said. “But I lost that battle. Maybe in season 2.”

Reed went the distance with the Moore era of Swamp Thing, reading the collected editions whenever she found herself with a moment, a coffee, or a drink.

“To my surprise, I became quite obsessed with them,” she said. “Alan Moore’s run of Swamp Thing is so exquisitely beautiful, and the language is so rich and vibrant, and full of just love, and hope, and also fear.”

That run, from 1984 to 1987, famously re-positioned Swamp Thing away from his initial origin into something more horrific and, at the same time, more wondrous. And though it seems the new television series will take its cues from those stories, it is unclear if it will employ the key idea from that era — is Swamp Thing a transformed man named Alec Holland (played by Andy Bean in this series) or a creature who merely thinks he is Alec Holland? 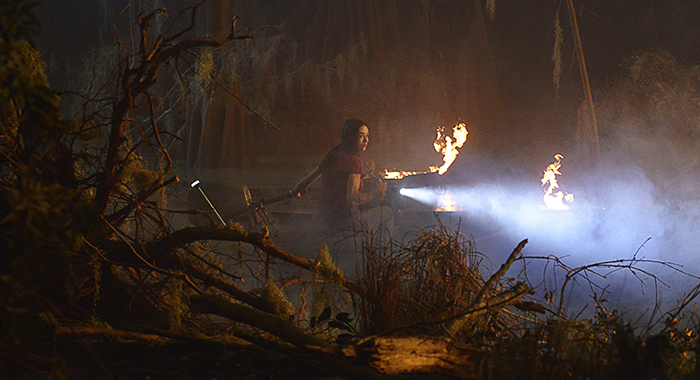 Swamp Thing himself is played by actor Derek Mears in a full body suit. The look of the character is outstanding and faithful to the comic book design. And as Reed explained, having a man on set playing Swamp Thing is part of the point.

“There is a life force within what is seemingly a plant, and there’s a beating force behind that. Derek really brought his entire soul to this character, and I don’t know what I would’ve done without him,” she said. “He really gave everything in every single scene that we had together. If I didn’t have him in the suit, if I didn’t have his eyes to look at, I’m not sure how I would’ve believed it myself. And it created such a great relationship.”

As teased in some of the trailers — and as any Swamp Thing reader will tell you — the relationship between Abby and Swamp Thing becomes surprisingly intimate. Asked if viewers not aware of the Moore storyline will be ready to see a Gothic romance within the series, Reed suggested the success of The Shape of Water primed audiences for unusual love stories.

“I think it was jarring to watch that kind of relationship [at first], but inevitably, it was about love and how that will ultimately conquer anything, including tendrils,” she said. “Hopefully, our audience will embrace it.”

She added that the Moore comics, where the romance was first realized, continue to be popular because the story comes from a very human place. While she hopes that is what viewers will take from the storyline, but expects the romance will lead to plenty of discussion regardless.

“I’m sure people will love it, hate it, and there will be a lot of jokes and memes. But I can say that it really moved me. And so therefore I hope it moves other people as well.”