Plus: National Treasure is becoming a TV show, a What We Do in the Shadows spinoff finds its U.S. home, and more of the week's biggest TV news.

Netflix outbid everyone for the Steven Yeun and Ali Wong TV show of your dreams, Nic Cage adventure National Treasure is becoming a TV series with a brand-new cast, What We Do in the Shadows spinoff Wellington Paranormal finds a U.S. home, and more of the biggest TV news of the week. 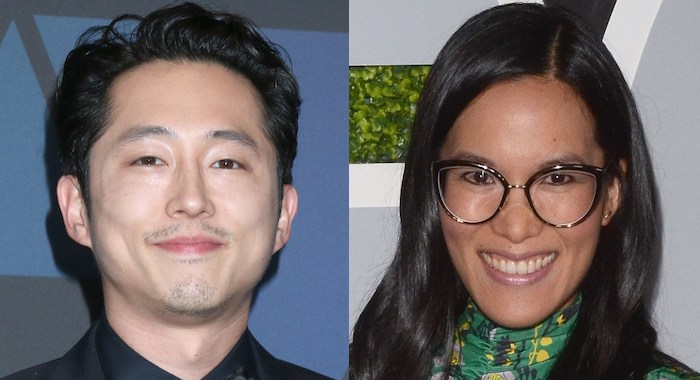 According to Deadline, which announced the news of the series last week, Netflix won the A24 project after a bidding war. Both Yeun and Wong are also executive producers on the project.

“Ali Wong, Steven Yeun, A24 and Netflix — it’s a dream team, and I’m honored to be collaborating with them,” said Lee in a statement. “I’m also grateful to the guy who yelled at me in traffic three years ago. I did not let it go, and now we have a show.”

Netflix exec Jinny Howe called Lee’s creation “a bold and at times outrageous world. It is an honest and powerful character study of two people who go about searching for connection in the unlikeliest of ways.”

American Horror Story Season 10 Will Be a “Double Feature”

Ryan Murphy announced via his Instagram account that the upcoming tenth season of American Horror Story, which has been filming in Provincetown, Massachusetts, will tell two spooky stories — one by land, one by sea — in a theme he’s dubbed “Double Feature.”

Season 10 of the horror anthology, like so many other shows, was pushed from 2020 to 2021 due to the pandemic, but is on track to premiere ahead of the Halloween season later this year.

What We Do in the Shadows Spinoff Finds U.S. Home 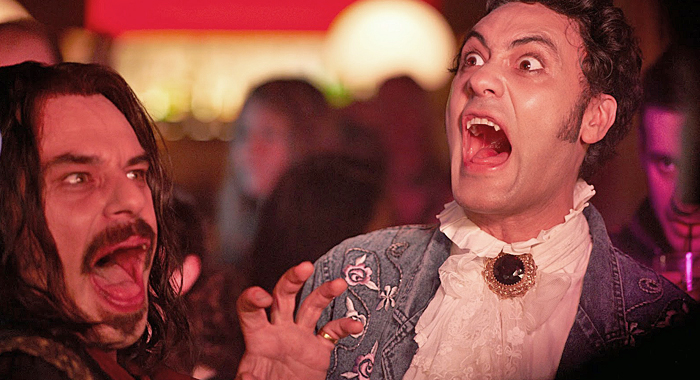 Wellington Paranormal, the TV spinoff of cult-favorite Kiwi vampire movie What We Do in the Shadows, has found a U.S. home. The New Zealand-set series — not to be confused with the What We Do in the Shadows TV show, which is also a spinoff of sorts set in New York City — will air on The CW and HBO Max this summer. The series, which was created by WWDITS directors Jemaine Clement and Taika Waititi, “follows the adventures of Officers O’Leary and Minogue, hard-working members of the Wellington constabulary’s paranormal unit who, under the supervision of Sergeant Maaka, investigate supernatural occurrences that arise in the capital of New Zealand on a surprisingly regular basis.” 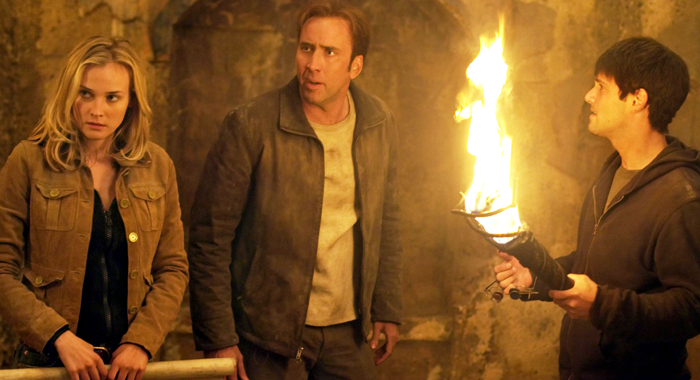 The long-rumored third National Treasure movie might still be up in the air, but the franchise is getting a new entry in the form of a TV series reimagined through the eyes of a 20-year-old DREAMer named Jess Morales.

According to The Hollywood Reporter, Jerry Bruckheimer is on board as a producer, as are original screenwriters Cormac and Marianne Wibberley. Mira Nair will direct the series, which centers on a younger cast as they “explore the ideas of identity, community, patriotism and who gets to write history as Jess and a diverse group of friends embark on an adventure to uncover her mysterious family history and recover lost treasure.”

Bruckheimer said in May 2020 that the series was being developed alongside a potential third film, which would star Nicolas Cage and the rest of the original cast.

NEW TRAILERS: Cristin Milioti and Billy Magnussen star in Made for Love

After 10 years in a suffocating marriage to a tech billionaire, Hazel (Cristin Milioti) finally makes her escape — only to find that her controlling ex (Billy Magnussen) has implanted a monitoring device in her brain that allows him to track and observe her as well as mine her “emotional data” as she tries to regain her independence. Made for Love premieres April 1 on HBO Max.

More trailers and teasers released this week:
• Big Shot follows a temperamental basketball coach (John Stamos) who takes a job as the head coach at an elite all-girls private high school. Premieres April 16 (Disney+).
• Kung Fu follows a Chinese-American woman (Olivia Liang) who returns from a years-long stay at a monastery in China and uses her teachings to protect her hometown of San Francisco. Premieres April 7 (The CW).
• The Nevers is a sci-fi series set in Victorian London that follows a group of women with newfound supernatural powers who are all in grave danger and must be protected. Premieres April 11 (HBO).
• The first season of horror anthology Them follows a Black family who moves from North Carolina to an all-white Los Angeles neighborhood in 1953, where their idyllic home becomes ground zero for malevolent forces. Premieres April 9 (Amazon Prime Video).
• Season 3 of Miracle Workers sees its characters hit the Oregon Trail. Premieres later in 2021 (TBS).
• Christopher Meloni’s Detective Elliot Stabler is back in action in Law & Order: Organized Crime. Premieres April 1 (NBC).
• Godfather of Harlem season 2 sees Forest Whitaker return as 1960s crime boss Bumpy Johnson. Premieres April 18 (Epix).
• Dad Stop Embarrassing Me follows a single dad and cosmetics brand owner (Jamie Foxx) who figures out fatherhood on the fly when his strong-minded teen daughter moves in with him. Premieres April 14 (Netflix).

Jamie Foxx is set to play Mike Tyson in the authorized limited series Tyson, executive produced by Martin Scorsese, the boxer himself, and Antoine Fuqua, who will direct. Colin Preston is set to write the show, which currently does not have a home.

Naomie Harris is set to star alongside Chiwetel Ejiofor in the Showtime series The Man Who Fell to Earth, based on the Walter Tevis novel of the same name (and, of course, the famous David Bowie-starring film). Ejiofor plays the titular alien, while Harris will play brilliant scientist Justin Falls.

Stanley Tucci is an Inside Man — he’ll star as the titular character alongside David Tennant, Dolly Wells, and Lydia West in the four-part Netflix/BBC miniseries that follows a U.S. prisoner on death row, a vicar in a quiet English town, and a math teacher trapped in a cellar whose paths unexpectedly cross.

The most adorable part of 2021’s award season, Minari star Alan Kim, is joining Awkwafina is Nora From Queens for the comedy’s second season. He’ll play the younger version of BD Wong’s character, Wally, in flashbacks.

In a surprise move, The CW’s Batwoman has recast Wallis Day in the recurring role of Kate Kane, the character previously played by former series star Ruby Rose. 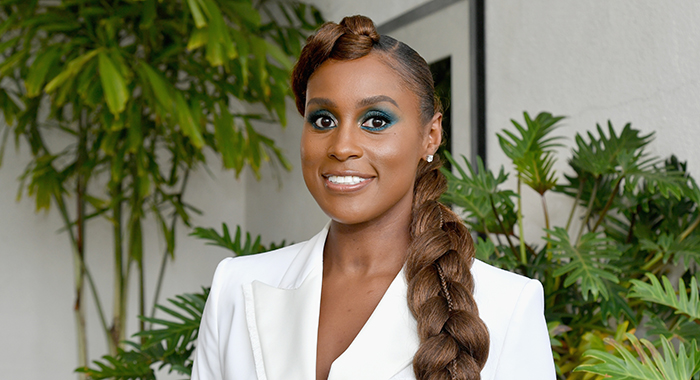 (Photo by Amy Sussman/Getty Images for Women In Film)

Insecure might be ending, but Issa Rae is staying at her home of WarnerMedia. The writer and actor has signed a five-year overall deal with the company, which will include television and features created by Rae’s company Hoorae. Upcoming projects include the fifth and final season of Insecure, which is filming now, plus HBO Originals including The Vanishing Half, Nice White Parents, and the documentary Seen and Heard, plus the HBO Max Original Rap Sh*t and a scripted series with Mark Phillips.

A new Disney+ series starring Alaqua Cox as Marvel’s Echo is in the early stages of development. Cox debuts as the deaf Native American hero in the upcoming Hawkeye Disney+ show, which stars Hailee Steinfeld.

David Duchovny‘s latest novel Truly Like Lightning is headed to Showtime, with Duchovny writing and starring in a series adaptation. Tyler Nilson and Michael Schwartz will write the script alongside the star, whose book follows a former Hollywood stuntman living with his three wives and ten children outside of Joshua Tree who becomes embroiled in a deadly chain of events after being approached by an ambitious real estate developer.