The Lost Boys gets a remake, Will Smith wants to turn "Summertime" into a musical, and new roles for Kevin Bacon, John Boyega, Henry Golding, and more.

This week’s Ketchup brings you more headlines from the world of film development news, covering new titles like Fantastic Beasts: The Secrets of Dumbledore and The Lost Boys. 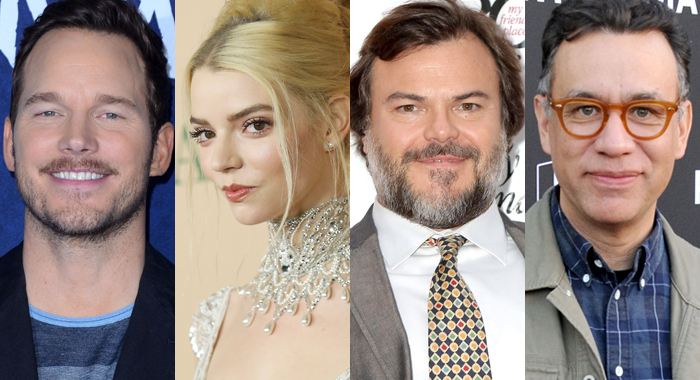 In 1993, Bob Hoskins and John Leguizamo starred in the ill-fated live action adaptation of the popular video game series Super Mario Bros. (Rotten at 28%), setting an early example for 25+ years of video game adaptations that almost always earned “Rotten” Tomatometer scores. The mistake in 1993 might have been making Super Mario Bros. live action set in the “real world,” since games like Super Mario World and its sequels and spinoffs were set in such brightly lit fantasy worlds. In 2017, the news first broke that Nintendo was partnering with Illumination Entertainment, the animation studio behind Despicable Me, The Secret Life of Pets, and Sing, to produce an animated adaptation of Super Mario Bros. Yesterday, Universal and Illumination confirmed Super Mario Bros. will be released next year on December 21, 2022. Mario and Luigi will be voiced by Chris Pratt and Charlie Day (It’s Always Sunny in Philadelphia), respectively, alongside Anya Taylor-Joy as Princess Peach, Jack Black as Bowser, Keegan-Michael Key as Toad, Sebastian Maniscalco as Spike, Seth Rogen as Donkey Kong, Kevin Michael Richardson as Kamek, and Fred Armisen as Cranky Kong. Charles Martinet, the video game voice of Mario, will also have an unspecified cameo role. Although he doesn’t use what will likely be his “Mario” voice, you can hear Chris Pratt say “It’s-a Me, Mario!” for the first time in this Instagram post.  Super Mario Bros. will be directed by the Teen Titans Go! To the Movies team of Aaron Horvath and Michael Jelenic, working from a screenplay by Matthew Fogel (The LEGO Movie 2: The Second Part and the upcoming Minions: The Rise of Gru). The December 21st date for Super Mario Bros. in 2022 lands it just five days after two other high profile movies, Avatar 2 and Aquaman and the Lost Kingdom, both currently scheduled for December 16, 2022.

1. THIRD FANTASTIC BEASTS WILL EXPLORE THE SECRETS OF DUMBLEDORE

J.K. Rowling’s original 2001 Harry Potter spinoff book Fanastic Beasts and Where to Find Them was a fairly direct encyclopedia of exactly what the title promised, but the film adaptation (Certified Fresh at 74%) and especially its sequel Fantastic Beasts: The Crimes of Grindelwald (Rotten at 36%) arguably spent more time exploring the backstory of Harry Potter’s human characters than it did showing off, you know, Fantastic Beasts. Despite the COVID-19 pandemic pushing back filming several months (the original start date was 3/16/2020), the third movie now titled Fantastic Beasts: The Secrets of Dumbledore has been pushed up three months from July 15, 2022 to the Easter weekend of April 15, 2022. The title suggests more backstory for the young Dumbledore (played by Jude Law), and we also know that Mads Mikkelsen is stepping in to replace Johnny Depp as the villainous wizard Gellert Grindelwald. The other movies currently scheduled for April 15, 2022 are the romantic adventure The Lost City of D (starring Sandra Bullock and Channing Tatum) and the DreamWorks animated comedy The Bad Guys (featuring the voices of Awkwafina, Anthony Ramos, and Sam Rockwell).

Every once in a rare while, film producers will announce a film after it has finished production. Assassin Club is an action movie that recently wrapped filming in Italy, and the cast includes an eclectic mix of stars. Henry Golding recently appeared in Guy Ritchie’s The Gentlemen (Certified Fresh at 75%) and headlined Snake Eyes: G.I. Joe Origins (Rotten at 37%), but he’s probably best known as the male lead in Crazy Rich Asians (Certified Fresh at 90%), and and Noomi Rapace has been in movies like Sherlock Holmes: A Game of Shadows and the original Swedish trilogy that began with The Girl with the Dragon Tattoo (Certified Fresh at 85%). Together, they star in Assassin Club as two of six assassins (of course) who have all been unknowingly hired to kill each other. Relative newcomer Daniela Melchior (Ratcatcher II in The Suicide Squad) co-stars as the girlfriend of Golding’s character, while the venerable Sam Neill is signed on to play his mentor. The film is expected to release sometime next year, though a specific date hasn’t been announced yet.

Although Hollywood’s obsession with remaking its past successes is starting to creep more and more into the 1990s, there are still a few 1980s favorites that are going to be revisited soon. One movie that it might actually be surprising wasn’t remade already was the 1987 hit The Lost Boys (Certified Fresh at 76%), starring Kiefer Sutherland as the leader of a gang of eternally (and stylishly) teenage vampires. Possibly part of the delay is that the plan had been for it to be rebooted as a TV show on The CW, but that pilot wasn’t picked up, so Warner Bros. is opting to go with a movie. It looks like The Lost Boys remake might start filming soon, because it’s being announced with its stars already attached. Those stars will be Noah Jupe (the son from A Quiet Place) and Jaeden Martell (Bill from the recent IT remakes), although it’s unclear which characters they will be playing (this writer’s guess is that they might play the two human brothers). The remake of The Lost Boys will be directed by Jonathan Entwistle (TV’s The End of the F***ing World) from a screenplay by Randy McKinnon, who is also adapting the DC Comics title Static Shock.

4. JOHN BOYEGA JOINS THE WOMAN KING AS THE (OTHER) KING

One of the most intriguing elements of Marvel’s Black Panther are the Dora Milaje, the all-female bodyguards of the King of Wakanda, which were based on the historical all-female military group called the Amazons of Dahomey. Their story will soon be told in the historical epic The Woman King, in which Viola Davis and Thuso Mbedu have been attached to star for some time, but casting is starting to step up as filming nears, including Lashana Lynch (Captain Marvel) joining the cast a few weeks ago. John Boyega (Finn from the recent Star Wars movies) also joined The Woman King recently as Dahomey’s King Ghezo. The Woman King will be directed by Gina Prince-Bythewood (The Old Guard, The Secret Life of Bees).

The COVID-19 pandemic may have dented the box office potential of the Aretha Franklin biopic Respect this summer, but Hollywood remains optimistic about the genre. Next year, we’re finally going to get the pandemic-delayed Elvis biopic (6/3/2022) from director Baz Luhrmann, followed by the Whitney Houston biopic I Wanna Dance with Somebody (12/23/2022), starring Naomi Ackie (Star Wars: The Rise of Skywalker), just in time for Christmas. We’ve known about Ackie’s involvement for a while now, but the biggest lingering casting question was about who would play New Edition singer and eventual Mr. Whitney Houston, Bobby Brown. The role of Brown will be played by Ashton Sanders, who is probably best known for his role as one of the teenagers in the Academy Award-winning 2016 drama Moonlight (Certified Fresh at 98%). Another key role will be record producer and executive Clive Davis, who will be portrayed by Stanley Tucci, and who is often credited with helping Whitney Houston achieve her stardom in the ’80s. With Bobby Brown and Clive Davis, the next major figure in Whitney Houston’s life yet to be cast might be her famous aunt, Dionne Warwick.

6. WILL SMITH TURNING HIS 1990S HIT SONG SUMMERTIME INTO A HIP-HOP MUSICAL

Years before starring in The Fresh Prince of Bel-Air, Will Smith was one half of the hip-hop duo DJ Jazzy Jeff & the Fresh Prince who had their biggest hit in 1991 with “Summertime,” which came out just as Smith’s sitcom finished its first season. Fast forward 30 years, and Smith is not only a major movie star, but also a successful film producer, and he is now turning his attention back to “Summertime.” Smith’s Westbrook Studios is partnering with Davis Entertainment to develop a hip-hop movie musical adapted from the song “Summertime.” Peter Saji, who is a writer on Black-ish and Cougartown, and co-created Mixed-ish, will adapt “Summertime” into a screenplay for which he will also make his directorial debut. It’s not yet known if Will Smith plans on co-starring in the film.

Way before Tremors, and even before Footloose, one of Kevin Bacon’s earliest roles was as one of the victims in the original Friday the 13th (Fresh at 63%) in 1980. Bacon has done thrillers and similar genres since then, and this week, he signed to co-star in another horror film, specifically an untitled Blumhouse project previously known as Whistler Camp, a story of LGBTQIA+ empowerment set at a gay conversion camp. The lead camper will be played by Theo Germaine, who might currently be best known for his role in Netflix’s The Politician (Rotten at 48%), and it will be the feature directorial debut for screenwriter John Logan (Gladiator, The Aviator). In related news, Kevin Bacon’s daughter Sosie Bacon, who had a supporting role in Mare of Easttown, landed a lead role in the psychological thriller Something’w Wrong with Rose this week.

8. THE RUSSIANS HAVE BEATEN TOM CRUISE IN THE NEW SPACE RACE

One of the craziest new movie projects to be announced last year was Tom Cruise’s untitled film that aimed to be the first movie ever filmed in outer space, which is expected to film on the International Space Station under the direction of Doug Liman, who directed Cruise in Edge of Tomorrow (Certified Fresh at 91%) and American Made (Certified Fresh at 86%). Given how many pieces need to be in place for Cruise’s ambitious project to actually happen, it perhaps not be surprising that he and Liman ended up losing this particular “space race.” Instead, it’s going to be the Russians who make the first movie in space, as a film called The Challenge will be lifting off on October 5th. Having said that, it appears likely that Cruise’s project will still be able to claim to be the first Hollywood production to film in space… presuming it happens soon, before Richard Branson or Elon Musk beat him to it.

Hollywood seems to be slowing down a bit on adapting comic books (that aren’t Marvel or DC), but in addition to video game adaptations, Hollywood is increasingly turning to manga and anime as sources for live-action adaptations. This week’s news involves a classic 1980s manga (that was also adapted as an anime), Masami Kurumada’s Saint Seiya, which is being adapted by Sony as Knights of the Zodiac. The movie has already been filmed at locations in Hungary and Croatia, with a cast that includes Mackenyu (Pacific Rim: Uprising), Madison Iseman (from the two recent Jumanji movies), Sean Bean (Game of Thrones), Famke Janssen (X-Men), Nick Stahl (Terminator 3: Rise of the Machines), Diego Tinoco, and Mark Dacascos. Mackenyu will star as Seiya, a “street orphan” who “embarks on a journey to conquer the ancient Greek armor of Pegasus and choose his side in a preternatural battle for the fate of Sienna (Iseman), a young girl who struggles to control her godly powers.”