The Expendables gets a new installment, The Accountant gets a sequel, and new projects for John Malkovich, Francis Ford Coppola, Sigourney Weaver, and more.

This week’s Ketchup brings you more headlines from the world of film development news, covering such titles as The Accountant 2, The Color Purple, Megalopolis, ‘Salem’s Lot. 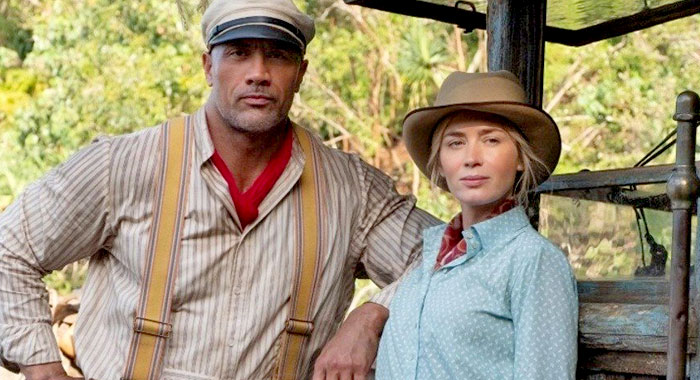 This past summer, as both the Delta variant and day-and-date streaming strategies impacted the box office of several films, it’s perhaps easy not to notice that films like Free Guy (Certified Fresh at 81%) and Jungle Cruise (Fresh at 62%), which did have “free streaming” competition, fared relatively well. Disney’s Jungle Cruise, for example, despite all of its obstacles, has still managed to earn $100 million domestic, which, with everything else going on, is good enough that Walt Disney Pictures is indeed moving forward with plans for a sequel. Both Dwayne Johnson and Emily Blunt are expected to return (sequel options were probably already in their contracts), as are director Jaume Collet-Serra and co-writer Michael Green, who is officially the first creative back to work on the sequel. What Disney is not disclosing just yet is what the sequel could be about, or where it could be set (another river, or something else?). Disney certainly has plenty of other popular theme park attractions that could be adapted to fit the Jungle Cruise format with the same cast, such as say, Disney’s Animal Kingdom. Among the projects Dwayne Johnson has coming soon are Netflix’s Red Notice, the animated movie DC League of Super-Pets (5/20/2022), and the DC Comics adaptation Black Adam (7/29/2022), also directed by Jauime Collet-Serra.

1. FRANCIS FORD COPPOLA MAY FINALLY GET HIS MEGALOPOLIS DREAM PROJECT MADE

Many films take years to get made, while some are abandoned altogether. One of the projects with the longest film development phase is Megalopolis, which Francis Ford Coppola (The Godfather, Apocalypse Now) first started back in the 1980s (yes, nearly 40 years ago). Coppola’s difficulty in getting Megalopolis going is especially noteworthy considering his status as a successful film producer, but the ambition and budget is usually cited as the biggest obstacle to the film getting greenlit (as well as similarities to the events of 9/11). Now 82 years old, Coppola has decided to throw his own money behind finally getting Megalopolis produced. The ambitious sci-fi epic about a futuristic city architect may have an impressive cast as well, as the actors Coppola has reportedly met with include Oscar Isaac, Cate Blanchett, Forest Whitaker, James Caan, Jessica Lange, Michelle Pfeiffer, Jon Voight, and Zendaya (and there will reportedly be many other roles for big names). Francis Ford Coppola reportedly has new liquidity with which to fund Megalopolis because of the recent sale of his Sonoma vineyards.

The two actresses that left the biggest impressions in Steven Spielberg’s original adaptation of the Alice Walker novel The Color Purple (Fresh at 81%) were probably Whoopi Goldberg and Oprah Winfrey, but the film does have several strong female roles. Warner Bros. is currently well into pre-production on a big-screen adaptation of the Tony-winning Broadway musical (adapted from Walker’s novel). Blitz Bazaule (Black is King) is directing and currently casting up, but the only name we knew before this week was Corey Hawkins (In the Heights), who will play Harpo. The second cast member announced is four-time Grammy-winning singer and songwriter H.E.R., who will be playing Squeak, the meek wife of Hawkins’ character (played by Rae Dawn Chong in the first film). Major roles yet to be cast include Celie (Whoopi Goldberg in the first film), Sofia (Oprah Winfrey), Shug Avery (Margaret Avery), and “Mister” (Danny Glover). Warner Bros. has already scheduled The Color Purple for release on December 20, 2023.

For some Martin Scorsese fans, Paul Schrader may always be best known as the screenwriter behind early Scorsese successes like Taxi Driver (Certified Fresh at  96%) and Raging Bull (Certified Fresh at 93%), but Schrader has stayed busy as a writer and director. He found success in 2017 with the Ethan Hawke priest drama First Reformed (Certified Fresh at 93%) and his film The Card Counter, starring Oscar Isaac and Tiffany Haddish, started its festival circuit run at Venice this week. With all that going on, Schrader is already quickly moving onto his next film, a thriller called Master Gardener. Joel Edgerton will play the title character, who works on the estate of a wealthy woman played by Sigourney Weaver, who requests he take on her troubled great niece as an apprentice, which “upends his life, threatening to draw him back to his violent past.” The role of the niece has apparently not been cast yet.

Last summer, The Weekly Ketchup reported that Viola Davis was set to team up with director Gina Prince-Bythewood (Love and Basketball, The Secret Life of Bees) for the historical epic The Woman King, about the leader of an all-woman military branch of the Kingdom of Dahomey in the 18th and 19th centuries in Africa (in what is now Benin). The film appears closer to getting its greenlight from TriStar Pictures, as this week, Captain Marvel co-star Lashana Lynch also joined the cast of The Woman King. Davis will play the general in charge, with Lynch playing a “charming veteran warrior,” and relative newcomer Thuso Mbedu (The Underground Railroad) playing an “ambitious recruit.”

Adaptations of Stephen King novels and short stories became so ubiquitous in the 1980s that it’s almost hard to believe that before The Shining (Certified Fresh at 84%) came out in 1980, Carrie (Certified Fresh at 93%) was the only movie adapted from a Stephen King novel. That may have led to the strange circumstance in which King’s second horror novel, the deconstruction of the vampire myth ‘Salem’s Lot, was adapted not as a movie but as a TV mini-series. There have been other versions of ‘Salem’s Lot on TV since, but we’re just now finally getting a ‘Salem’s Lot feature film. The film is quickly casting up this week, with three announcements in a row, starting with Makenzie Leigh, Bill Camp, and Spencer Treat Clark. Lewis Pullman (TV’s Catch-22) was then announced as the film’s lead, as an author who is basically Stephen King’s stand-in. Then, most recently, Alfre Woodard also signed on for the doctor role (who was a male in the novel), who is sort of the Dr. Van Helsing of the story.

NEON is an indie distributor that since 2017 has given us such films as Colossal (Certified Fresh at 81%), Ingrid Goes West (Certified Fresh at 86%), I Tonya (Certified Fresh at 90%), Portrait of a Lady on Fire (Certified Fresh at 98%), and the Academy Award Best Picture winner Parasite (Certified Fresh at 98%), among others. A few of those indicate that NEON tends to favor darkly humorous films, but this week, their new project Cuckoo is described as a straightforward horror film, suggesting something in the vein of A24 movies like Midsommar and The Witch. The premise is being kept basically secret, but we do know that the leads will be John Malkovich and Hunter Schafer (HBO’s Euphoria), with Sofia Boutella (Kingsman: The Secret Service) and Gemma Chan (Marvel’s upcoming Eternals) apparently in supporting roles.

7. WARNER BROS. DID THE BOX OFFICE MATH AND MOVES FORWARD WITH THE ACCOUNTANT 2

After having a critical and box office hit with David Fincher’s Gone Girl (Certified Fresh at 87%) in 2014, Ben Affleck’s film output hit sort of a rough patch starting in 2016 that included both his Justice League movies and his non-Batman roles like The Accountant (Rotten at 52%) and Live by Night (Rotten at 34%). Despite that Tomatometer score, The Accountant did earn $155 million worldwide from a relatively modest budget of $44 million, which was apparently good enough for Warner Bros. to give the go-ahead for a sequel. Gavin O’Connor (who also directed Affleck in The Way Back) confirmed this week that Warner Bros. has officially started development on a sequel to The Accountant. Jon Bernthal’s role is described as being more significant, though it’s worth noting that neither Affleck nor Bernthal are signed for the sequel as of yet. At the same time, O’Connor clarified that “there will not be a Way Back sequel, but we are doing an Accountant sequel.”

8. NO, NO, NOT THE BEES: JASON STATHAM ALL ABUZZ ABOUT THE BEE KEEPER

Since reinventing his screen persona with Taken, Liam Neeson has essentially created a new genre of action films that could easily be defined as “Liam Neeson as insert-profession-here”, such as Cold Pursuit (Liam Neeson as a snow plow driver) and The Ice Road (Liam Neeson as an ice road trucker). This story is actually about a new Jason Statham movie, but the idea behind it sounds like one of those Neeson projects, because it’s Jason Statham as… The Bee Keeper. The premise is being kept secret, but it’s described as “a lightning-paced thriller deeply steeped in the mythology of bee keeping.” Yes, really. One has to wonder if Statham saw the Nicolas Cage remake of The Wicker Man (Rotten at 15%), and thought, “yes, that, but it’s me kicking ass and making bee puns.” We should see what all “the buzz” is about in 2023 or so.

One of the appeals of an ensemble-dependent action franchise like The Expendables is that each new film introduces new stars (keeping in mind that the first film itself had over a dozen of them). The Expendables 2 (Fresh at 67%) brought in Chuck Norris, Liam Hemsworth, and Jean-Claude Van Damme, while The Expendables 3 (Rotten at 32%) added Antonio Banderas, Harrison Ford, Mel Gibson, and Wesley Snipes. There will be at least 8 years between The Expendables 3 in 2014 and whenever The Expendables 4 comes out (probably 2022 or 2023), but the fourth one is indeed happening. The new cast members will include Megan Fox (Transformers), rapper-turned-actor 50 Cent, and  Tony Jaa, and they’ll be joined by Expendables alumni Sylvester Stallone, Jason Statham, Dolph Lundgren, and Randy Couture. It’s unclear if there will be other new cast members who haven’t yet been announced. The Expendables 4 will be directed by stuntman-turned-director Scott Waugh (Act of Valor, Need for Speed).