Small Axe Director Steve McQueen: "It Doesn't Matter Where You're From, You Can Identify With These As Human Stories"

For his five Certified Fresh films set in London's West Indian community, the director drew inspiration from his father and upbringing to tell stories with universal resonance. 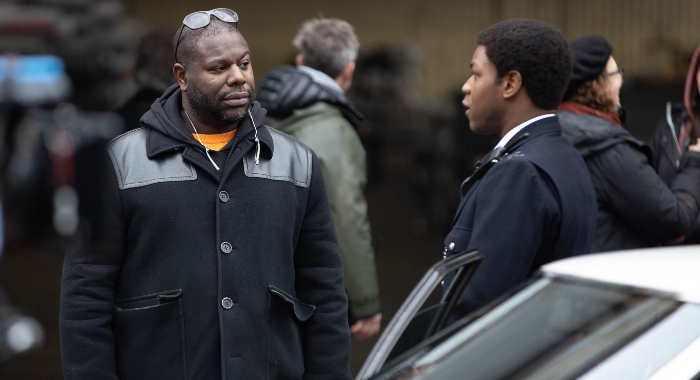 Celebrated director Steve McQueen has already proven he’s a man of many talents. After all, his varied career has given us the heralded Hunger, about Bobby Sands and the 1981 Irish hunger strike; the provocative sex-addiction drama Shame; visceral Best Picture winner 12 Years a Slave; and, more recently, Widows, a thrilling heist flick with social justice on its mind. It’s hard to imagine him hitting a new register, not because artists do not grow, but because the breadth of the work that came prior has already delivered so many thrills with such different flavors. Yet with the help of brand new faces – among them cinematographer Shabier Kirchner and co-writers Courttia Newland and Alastair Siddons – McQueen has given us, with his new five-film anthology Small Axe, a set of dazzling new works that show he’s capable of things beyond our imagination.

What Small Axe actually is has been the subject of debate – is it a set of TV episodes or an anthology series? – but the clearest way to think of the collection is as five thematically linked films, all set in the West Indian community of London between the late ’60s and the mid ’80s. In Lovers Rock, we experience a freeing blues party among West Indians shunned from white nightclubs; Mangrove unfolds as a stirring courtroom drama based on a true story and a dark day for the British justice system; the inspiring life of Alex Wheatle, the British novelist who rose from prison to literary acclaim, backbones a fiery eponymous biopic about cultural identity; the fraught relationship between Leroy Logan, a Black cop tasked with reforming London’s racist police force, and his distraught father propels Red, White and Blue; and in the tender coming-of-age story, Education, a determined Black mother saves her son from a prejudiced school system.

The stories are the documented experiences of a community rarely seen on the big screen, one that includes McQueen’s family, his friends, and himself. With sumptuous shots of women swaying their hips at a steamy blues party, close-ups of simmering mutton curry, and invigorating needle drops, Small Axe is specific to its West Indian subjects. At the same time, in explicating histories from the Black Caribbean diaspora in the UK – delving into ceaseless police harassment, brutal racism, a pernicious justice system, and beyond – Small Axe is familiar to all oppressed people, no matter their origin.

Robert Daniels for Rotten Tomatoes: When Red, White and Blue premiered at New York Film Festival a lot of critics were under the impression it was the final film in the anthology, rather than Education. Those are obviously two wildly different tones to conclude with. How did you decide the final order?

Steve McQueen: I’m a person who grew up with albums. And for me, I had to evaluate how I wanted to end the album, as such. I thought Education was the key in the sense that it’s all about the possibilities, rather than the things people prevent you from achieving. All the way through Small Axe, it was all about how people took it upon themselves to liberate themselves – to emancipate themselves from the environment they were in. So I definitely wanted to end on the infinite possibilities that are achievable in the world. Hence, the ending images.

With regards to reception, Small Axe very much feels like an assemblage of Black-specific stories concerning music, food, and politics. Do you consider these Black-specific, though?

McQueen: It’s like watching a Korean film or a Taiwanese film, or a film from Italy. These are human stories which are universal. That’s what it’s about. It doesn’t matter where you’re from or what background you’re from. I think you can identify with these as human stories. It’s about people overcoming adversity through their own force of will. I think it’s very common to anyone, wherever they come from in the world.

Some have described Lovers Rock, especially the dancing, as Black joy and Black love, but it could also be seen as Black lust.

Yes – there are the close-ups of men asking women for a dance by touching their elbow.

McQueen: Or even squeezing someone’s bottom. It doesn’t matter. Sexual sensuality is beautiful. It’s wonderful. I remember someone saying about blues parties, “Oh, my mother said that blues parties weren’t like that. What actually happened was that people danced as close as possible, but without touching.” I wanted to ask her what party her mother went to. [Laughs] I imagine a lot of people have been embarrassed about what they did when they were younger, and they told their children something else. But there’s no shame in it. It’s just a celebration of us as fully formed human beings. And it’s just beautiful.

There are so many new faces in these films. Your collaboration with Michael Fassbender is well known; was it a conscious decision to find new faces for this project?

McQueen: Yes, because I wanted to give people a break. I wanted to see people who had never been given an opportunity to fully exercise their talent. And it was amazing. There were a lot of newcomers like Amarah [-Jae St. Aubyn] and Kenyah [Sandy]. And with [cinematographer] Shabier [Kirchner], when you have the opportunity to do what we did with those five feature films – different film stocks and digital cameras – no one’s had the opportunity to do that. It’s very rare. So the fact that he came on board and took his opportunity, it was great.

As a band leader, I would call myself, you just want to play with people who can actually play. Or when you see potential which hasn’t been fully exercised, you try to help them in their development. It’s about me choosing who I want to work with and getting the best out of them. Helping people fulfill their potential. And I want to focus particularly on Black artists, regardless of what field they’re working in.

And that’s what I find so special about this series. We’ve seen Letitia Wright and John Boyega in big projects, but not utilized by other filmmakers in the way they are here.

McQueen: I look at Star Wars, as far as John is concerned, and you know he’s got so much potential. That’s a particular genre of film where it’s not about acting but reacting. And [Small Axe] was the point where he had to bring his A-game and dig deep for the potential that was there. My job as a director is to help him achieve that. ‘Cause when I first saw him on Attack the Block, I thought this guy has something. He’s grown, of course, since Attack the Block. He has a lot more baggage as a human being. And now was his time.

Boyega previously described, in the press notes for RWB, taking an interest in Leroy Logan’s favorite music in order to prepare for the role. Are there situations where you’ll give an actor supplementary material as prep?

McQueen: Myself, John, and Courttia [Newland] – our co-writer – we talked about our fathers, because that’s the thing that brought me into Red, White and Blue and connected me with Leroy Logan. And Leroy talked about his father a lot. When we were interviewing him, I was digging into who he was as a person. That was the seed, and we had to go deep to unravel him. It wasn’t just a case of the music. We had to find out the terrain for what we were going to cover. All of our fathers, these West Indian men, were very cautious and very dominant, but at the same time, very caring. They weren’t forthcoming in their emotions, but they were very forthcoming in how we were to conduct ourselves or what they believed we could achieve. 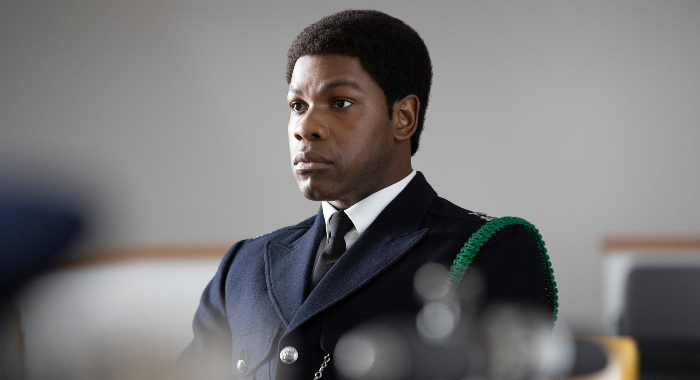 With Leroy Logan’s story, it basically ends with his appeal to his father. Alex Wheatle’s story is very self-contained, too. How did you decide what parts of their lives you wanted to recount?

McQueen: The first bump in the road for Leroy is the most important bump. The fact of the matter is you could go on, and on, and on, and on, but I needed the initial impact. Leroy’s aspirations had crumbled. He thought he could change the world. His father felt very hurt when he suddenly joined the police. When Leroy realized what the actual situation was, when he realized the actual weight of the institution, and its surroundings were against him – that’s the first impact. That’s when they sit down at the table and have that conversation about the state of the world.

I could’ve done a story about how he [later] left the Metropolitan Police force. But it was about the first impact. It was about the loss of innocence. That was the important thing. Because before your first bump in the road, does it matter what your parents tell you? They can tell you, “You’ve got to be careful.” And maybe you’ve seen stuff on TV. Maybe you’re aware of it. But when it happens to you personally, for the first time, that’s when you have a very deep realization [of], “Can I still change the world? Do I still feel invincible?” You’re sitting down with your father, and he’s been around, and what does Leroy say: “Maybe we should just scorch the Earth and hopefully something good will come again.” For me, as a filmmaker, that was the heart. And any Black person, wherever they are in the world, will understand that. 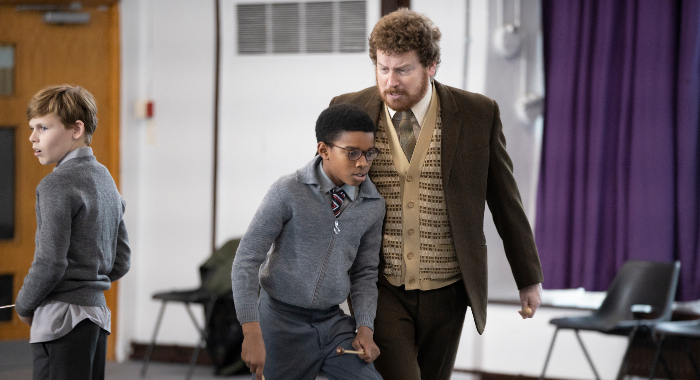 My father grew up in Mississippi, during Segregation. That made an impact on him for his whole life. I had to deal with that impact and figure out what it meant.

McQueen: Exactly, exactly. When he’s sitting down with his father, and they’re drinking rum together, he’s not a boy anymore. He’s a man talking to a man. And when his father says, “Let me tell you what my mother said to me,” it’s a generational thing. The father’s talking about his mother. The father is talking to his son. It’s like a circle. So it’s very important where you begin a story. It’s very important where you end a story. This is art. It’s not about having a situation where you repeat it again and again. It’s a craft. It’s as simple as that.

And, finally, what are your thoughts on whether Small Axe is a film or television conversation?

McQueen: It was always meant to be for television. These are five films, but it’s all about the accessibility of these films. I had to go to where people were at. That was always my idea. I said very early on that I wanted my mother to see it, that it could be in every home in the UK, as well as, of course, with Amazon. And as far as these critics groups, I’m just very grateful, and very humbled that they’ve recognized it in any capacity. Because it’s not always the case that you get any kind of praise. So I’m very grateful because all it does is let other people be curious to see them. So it’s fantastic. We’re all very grateful.