The actors behind your next on-screen couple obsession, Phoebe Dynevor and Regé-Jean Page, say Rhimes' addicting, steamy, progressive series is a step forward for the period drama.

Shonda Rhimes is a master of infusing otherwise tired or trite television genres with important, topical conversations said with flair.

Grey’s Anatomy, her smash hit medical drama on ABC, brought in stories of sexual assault, abortion, adoption, single motherdom, and more into a world of hospital doctors who grapple daily with how to save a life. On her other cult ABC shows, How To Get Away with Murder and Scandal, talks about racial injustice, corruption, and taking down the establishment flittered under the score of, respectively, a murder mystery and a drama about Washington, D.C., insiders.

It doesn’t hurt that these shows also frequently involve smoldering glances and frolics under the sheets.

In keeping to form, the latest series produced under the Shondaland mantle, Bridgerton, doesn’t disappoint.

Created by Shondaland veteran Chris Van Dusen (Scandal, Grey’s Anatomy, others) and based on author Julia Quinn’s best-selling novels about the cutthroat world of societal-status climbers in Regency-era London, Bridgerton is the first Rhimes-produced Netflix series to air since Shondaland signed a mega-deal with the streaming platform in 2017.

The plot details of Bridgerton begin to spill out via Lady Whistledown. Either an insider or interloper hiding among the ranks of the aristocracy and their staff, this narrator pens a Gossip Girl–ike newsletter on courtships and engagements among the wealthy and is someone whom we’re lead to assume sounds like Julie Andrews. (The actor provides the voice over for the series.)  While a preferred pronoun is not immediately clear, this person (or persons?) is also a mysterious busybody who has all the tea – and it is sipped from fine china with no lipstick smudges.

But much of the on-screen time (and chemistry) is devoted to the budding romance between Phoebe Dynevor’s Daphne Bridgerton, the delicate, beautiful, and well-poised eldest daughter of a family in good standing, and Regé-Jean Page’s Simon Basset, the rakish duke and heir to a substantial fortune (who also happens to be the playboy best friend of Daphne’s older brother). There’s a lot of pressure on Daphne in particular after the spectacle-loving Queen Charlotte (Golda Rosheuvel) singles her out as the best catch of the matchmaking season – meaning she’ll have lots of suitors and lots of enemies.

The period genre’s familiar tropes like chastity, marrying for love (or at all), and instilling a familial lineage are all addressed. But the show’s reliance on inclusive casting and showcasing characters who have zero qualms about interracial relationships make these topics seem more modern.

“I remember the very early conversations about the show, we talked about doing things that people didn’t expect us to do in traditional period dramas,” Page said during a Zoom call with Dynevor and Rotten Tomatoes.

Topics like the female gaze (spoiler: his shirt comes off quite a bit) and inclusion were frequent because the cast and creators wanted “the freedom to, kind of, come into a time period where people have very traditional expectations and bring in 21st century conversations,” Page said.

He elaborates that goal was to “bring in a different perspective on stories that we think we know whilst also just having a lot more fun” because “there’s so much color and glamour” to the Regency era.

The casting decisions also help Bridgerton follow in the recent tradition of shows like Apple TV+’s Dickinson and Hulu’s The Great (or even Broadway’s Hamilton) – projects where, anachronisms aside, viewers who historically have not gotten a chance to see people who look like them on screen in these types of roles are now being recognized.

“I think everyone is watching Netflix around the world,” Dynevor said. “People should be able to see themselves reflected back in the story, of course. If you’re not seeing yourself, you’re not going to engage in that, really, and I think what [the Bridgerton producers] have done is brilliant and hopefully will happen more and more now.”

Some expected tools of successful period dramas are very much at play, however.

For one: a lot of the Bridgerton eye candy also has to do with the costume choices. Ladies appear in diamond necklaces, feathered headbands, and cleavage-enhancing silk dresses while their suitors wear spotless waistcoats and fitted pants. The designs come courtesy of costume designer Ellen Mirojnick and her team and they’re covetable in the way that PBS’s Downton Abbey once sent a ripple through the wedding and fashion industries.

Even if everyone knows that these gowns are not as always as comfortable to wear as they are to look at.

“I got away with a half corset, so it wasn’t the worst thing in the world,” Dynevor said, laughing. “I was honestly just really thrilled to be wearing all these beautiful outfits and gowns … I could have been got off a lot worse” because there were “a little more intense costumes” like the ones worn by Rosheuvel’s Queen Charlotte. 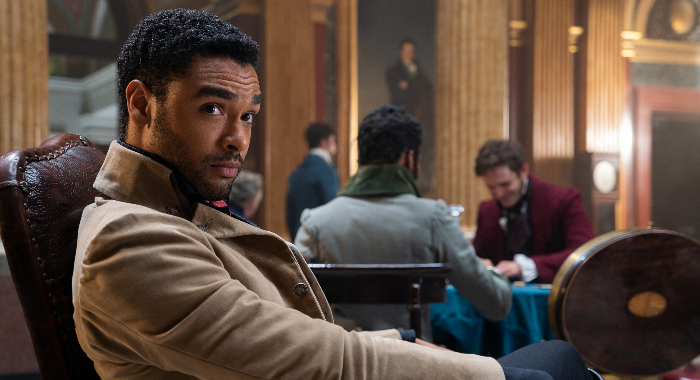 And there’s at least one trope that Bridgerton does not shy away from and that American audiences love: the charming British leading man.

“It’s something that we all universally have a finishing school for in the U.K., you must learn to be a charming British man, male or female,” Page joked when asked about the pressure of filling that key role. “I dropped out early. I was terrible at it.”

His timing for playing this type of character could not be more ideal, however. Hugh Grant recently told the Los Angeles Times that, although his name was synonymous with what he called the “romantic Englishman who is in love” for over a decade, he’s been trying to leave those characters behind him. Would Page like to take over those honors?

“I would step into Hugh Grant’s shoes any day of the week, and I would never give them back,” he said. “I would not just walk a hundred miles in those shoes; I would run a thousand. You would never see them again.”