David Brent's not so bad compared to trolls and bullies in real life. 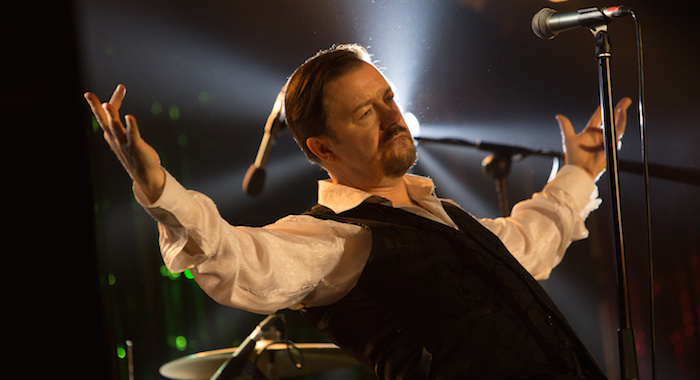 David Brent, Ricky Gervais’ character from the original The Office, is back, but Gervais really just wants to talk about the state of the world. Gervais wrote and directed David Brent: Life on the Rood and reprises the role of the socially awkward office manager from Slough. In the film, a documentary crew follows Brent on a rock ‘n’ roll tour, paying his band and touring expenses out of his own pocket.

In an interview with Rotten Tomatoes before Donald Trump’s inauguration, Gervais felt compelled to reflect on the 2016 campaign and election. The four-time Golden Globes host had not seen Jimmy Fallon’s turn as host of the ceremony this year, but he caught a clip of Meryl Streep’s speech that inspired then President-elect Trump to call her “overrated.” “It was amazing,” Gervais said. “She didn’t even name him.”

David Brent: Life on the Road premieres in the States on Netflix on February 10, and Gervais is working on a new standup routine called Humanity, which he wants to bring to the U.S. as well. Find out what Gervais thinks is at the root of the world’s conflicts, and a bit about the David Brent movie too. 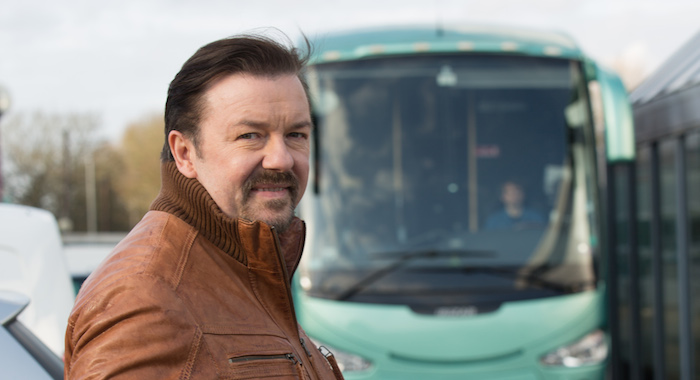 Fred Topel for Rotten Tomatoes: Did you ever consider maybe a more traditional style for the movie, or was the documentary style of The Office too important?

Ricky Gervais: No, I think it has to be a fake documentary because I wanted to show how the world had changed in the 15 years since we met Brent. He was an early narcissist. He was the guy who we thought was a bit of a prat, who made a fool of himself on telly but now it got more serious. There’s no difference now between fame and infamy so there’s a new breed of narcissists. That’s why I made David Brent a little bit different as well. I did make him a little bit more nervous about himself. He had a little bit of a nervous laugh and we hear about his breakdown, which we never heard about in a 15-year-old documentary. It was politer times. Now, documentary is more demanding. “We’re going to show you warts and all. We’re going to film your breakdown. We’re going to film your enema.” It was very important that it was a documentary that the character in it knew it was going to be seen.

RT: Is David more sympathetic than we’ve ever seen him before?

Gervais: Yes, he is, actually. Now we’ve got real alpha males who are real bullies who want to hurt David Brent’s feelings. Now we sort of side with him a bit more. He’s a little bit more honest. He’s sad already because he’s a 55-year-old tampon rep who isn’t the boss anymore and he’s wasting his hard-earned cash on trying to be a pop star because of all the things he’s seen on The X Factor and America’s Got Talent. His worst trait was always that he confused popularity with respect. I wrote this movie before the results that we’ve had this year, before Brexit, before Trump. It was always going to happen, those two things. The ground had been laid for it. There was always two camps, but now they came out. “Now you’re either with us or against us.” There’s so much hate in the world, so much venom for someone who thinks differently to you.

RT: Do you see a solution to this state of the world?

Gervais: No. People are shouted down for compassion and tolerance and weakness. People are angry. People who don’t care about things are angry at people who do because they’re making them look bad. Popularity counts for more than it should. When did winning outweigh being right? When did that happen? I’ve always been fascinated with fame and narcissism and vanity and lies. Everything I’ve done is about humanity. All these things pale into insignificance when it’s actually happening in the real world. Wow, I’ve gotten depressing, haven’t I?

RT: Your last movie, Special Correspondents, was about journalists who faked a news story. Were you surprised to see fake news become so real so quickly?

Gervais: No, I wasn’t, because it’s always been happening. People used to get their comeuppance. Honestly, this year has been more like The Invention of Lying. He says something. It’s on tape. It’s shown around the world and he stands up on the podium saying, “I didn’t say that.” You did, man. We’ve got it on tape. “No, didn’t say it.” 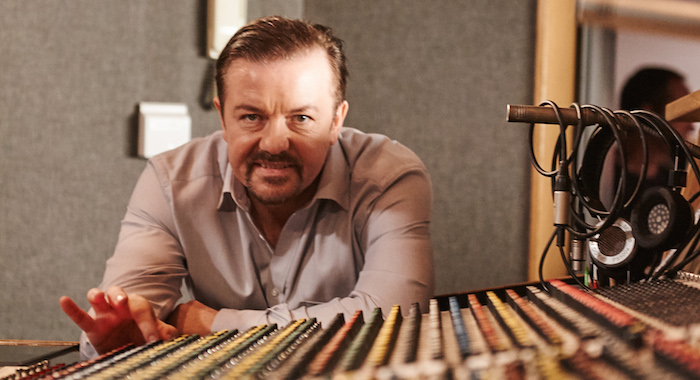 RT: Isn’t it more disturbing that people believe he didn’t say it when they’ve seen the tape?

Gervais: No, they don’t believe it, really. They just want to win because they know the other side is getting frustrated, which is weird because there should be no sides. It comes from people working themselves up that they’re the self-appointed disenfranchised. These “disenfranchised” people are actually pretty high up the ladder. The problem is when you’ve had privilege for so long, equality feels like oppression. They feel that they’re having their rights taken away, their right to say awful things and to be bigoted. [In an interview] someone said, “Why do you say you’re an atheist when you don’t want to hurt people’s feelings?” I said, “Hold on, that’s not fair. They’re allowed to say what they believe in but I’m not allowed to say that I don’t?” I said, “Just because you’re offended doesn’t mean you’re right. Some people are offended by mixed marriage. Some people are offended by equality. So what?” I think the big problem isn’t opinion. It’s people thinking their opinions are worth as much as facts. So people have an opinion about the age of the universe. This is absurd to me. People have an opinion about evolution. You can have your beliefs, you can have your opinions but you can’t have your own facts.

RT: Why hasn’t anyone gone back to claiming the world is flat while they’re at it?

Gervais: They do. In my new standup, Humanity, I have a quote from this creationist who took offense to me saying that the Earth is 4.6 billion years old. His next tweet was all capitals, which is a giveaway, saying, “YOUR SCIENTS [sic] WON’T HELP YOU WHEN SATAN IS RAPING YOUR BRITISH ASS. I’LL BE LAUGHING.” So he’s quite happy to be in Hell as well but that’d cheer him up.

RT: Some of your comedy comes from roasting other celebrities. Do you worry that people may try to copy your kind of comedy and become trolls?

Gervais: Exactly. I go after people’s public behavior, not their color, not their race, their sex, or their sexuality. In my standup, I often play a brasher, louder, more cocky, more stupid, more bigoted version of myself. I come on the wrong side for comic effect and everyone gets the irony, but now I’m worried they don’t. Now I’m worried that half the people don’t get the irony and I might get the wrong laugh. I might get the wrong round of applause. I have to be a lot more careful because people want to hurt people’s feelings. A troll is basically someone who wants to ruin your day. A troll is someone who wants to make you feel as bad as they do. You should ignore it, but it’s hard when they’re in power and they’ve got any platform and they’re rewarded for it.

RT: Should I ask a little more about David Brent?

Gervais: Sure, what do you want to know?

RT: Sometimes when actors return to famous characters after a long time, they sort of forget who the characters were. Have you always remembered who David Brent was, even if there are subtle evolutions of him?

Gervais: Yeah, I had him for so long, way before The Office. I had no choice but to make him older because I am. So he’s not 39 anymore, he’s 55. I wanted the first outing of The Office to have affected him a little bit. He’s slightly more tragic because fame had sort of pitched him up once, but he came back for more. You’re right, the character hasn’t changed much. 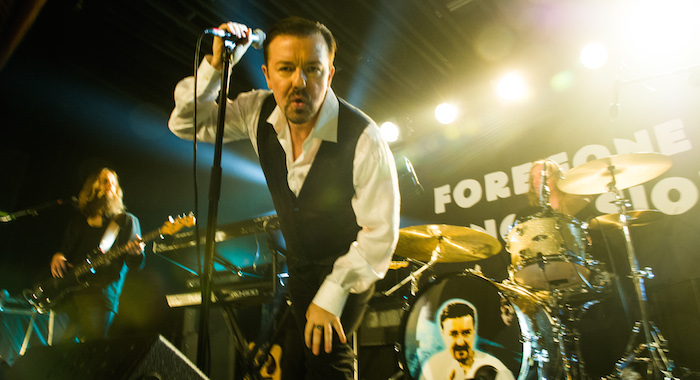 Gervais: Yeah, they weren’t comedy songs like Monty Python. It’s more the backstory that’s funny. Something like “Freelove Freeway” — cracking song, but it’s about crossing America and picking up chicks. When you remember it’s being sung by a 55-year-old tampon rep from Slough, it’s the backstory that’s funny. Things like “Don’t Make Fun of The Disableds” and “Native American,” he wants credit for singing about an issue, but he gets it wrong. He thinks he’s the first person to ever talk about the plight of the Native American, and he brings up scalping because he probably saw it in a western once. We’re still laughing at the blind spot. We’re still laughing about the difference between how Brent sees himself and how we see him. But it’s a slightly gentler blind spot compared to a real bully and what’s happening in the real world. Relative to the real world, Brent’s not so bad.