Critics say the vibrantly animated film is emotionally satisfying and packed with stunning action to offer a little something for everyone.

From Walt Disney Animation Studios comes a new princess-driven fantasy adventure with a focus on Southeast Asian representation and heavy themes involving a sentient plague and trust issues among humans. And it’s action-packed and full of laughs, too. Raya and the Last Dragon is receiving rave reviews for its ambitious ideas, stunning visuals, and impressive thrills, all of which will entertain audiences of all ages, whether on the big screen or streaming at a premium price on Disney+. But is it another instant classic from Disney with immediately beloved characters and iconic storytelling?

Here’s what critics are saying about Raya and the Last Dragon:

Does Disney have another animated classic on its hands?

Disney has done it again.
– Danielle Solzman, Solzy at the Movies

Another huge win for the studio.
– Josh Wilding, ComicBookMovie.com

One of Disney’s most breathtakingly beautiful endeavors yet.
– Rob Hunter, Film School Rejects

Raya and the Last Dragon has all the makings of a modern Disney classic.
– Molly Freeman, Screen Rant

Is the story a familiar one?

The narrative skeleton is, if anything, even more generic, and also a reminder that the generic has its pleasures.
– Justin Chang, Los Angeles Times 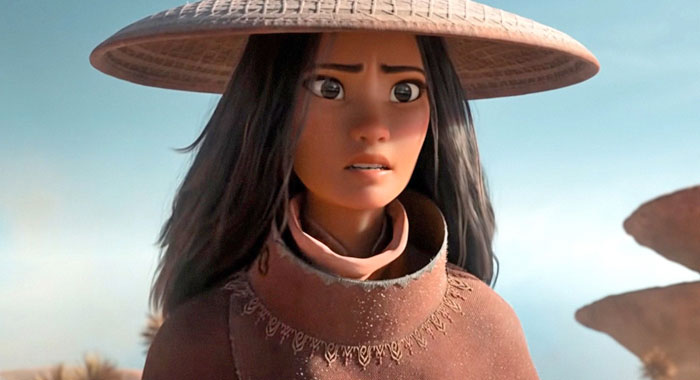 Are there any comparable films it recalls?

If Moana, Tangled, Mulan, Abominable and Big Hero 6 had a child…you’d get Raya and the Last Dragon.
– Christie Cronan, Raising Whasians

Like 2016’s Moana and 2009’s The Princess and the Frog, the film stands apart, through fresh voices and cultures, while still embracing universal truths and ideals.
– Rob Hunter, Film School Rejects

In its expansive world-building and aesthetic variety, Raya and the Last Dragon most viscerally conjures up the experience of watching a Star Wars film.
– Dan Rubins, Slant Magazine

The film the feel of a condensed Tolkien epic — a Lord of the Rings-light quest that takes Raya throughout Kumandra to accomplish her mission.
– Peter Debruge, Variety

How is the animation?

Raya and the Last Dragon is a technical triumph in every possible facet, simply just eye candy from start to finish.
– Sean Mulvihill, FanboyNation

You’ve never seen [water] animated so exquisitely…from water droplets to nautical travel to the epic beauty of a character leaping from one raindrop to the next, it is extraordinary.
– Rob Hunter, Film School Rejects 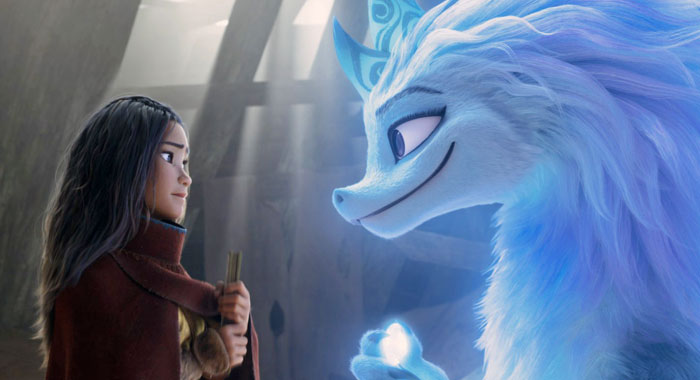 What about the performances?

It’s Tran’s movie and she excels in the lead role as Raya.
– Molly Freeman, Screen Rant

Tran imbues Raya with both a tenderness and a steely determination, making the character one of the more fascinating Disney princesses in a long time.
– Sean Mulvihill, FanboyNation

[Raya is] a well-rounded, complex character, much of that hinges of the emotion Tran delivers through her performance.
– Josh Wilding, ComicBookMovie.com

Awkwafina as Sisu is a bit over-the-top, and that’s what makes me laugh.
– Tania Lamb, Lola Lambchops

Does the movie have great side characters?

Sisu just isn’t special enough to gain entry to the Disney character hall of fame… [she] looks weird, like someone stuck a plastic My Little Pony head on a floppy feather-boa body.
– Peter Debruge, Variety 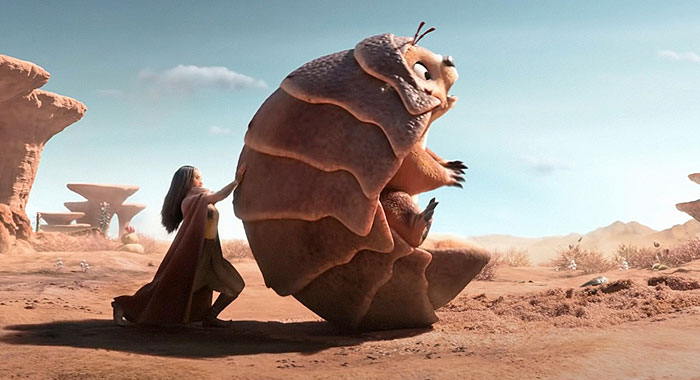 How respectful is the Southeast Asian representation?

Detail in the faces of the two rivals and Sisu in her human form… suggest something of the diversity in facial features among a group of people often stereotyped as all looking the same.
– Inkoo Kang, Hollywood Reporter

From the tone and texture to the shine and glow – Raya and the main characters did not have that fake yellow skin, but a better representation of olive skin tone.
– Christie Cronan, Raising Whasians

The specific pan-Asian details — a bowl of shrimp congee, a price paid in jade pieces — are amusing even when they brush up gently against stereotype.
– Justin Chang, Los Angeles Times

Raya‘s vision of diversity doesn’t feel as satisfying as a more culturally specific story like Pixar’s Coco, which found universality within its specificity.
– Hoai-Tran Bui, Slashfilm

Will action fans be satisfied?

When it comes to the action sequences, Raya and the Last Dragon breaks new ground… taking cultural fighting styles and bringing them to life via animation.
– Sheraz Farooqi, ComicBook Debate

The face-off between Raya and Namaari delivers a thrilling set-piece that any action film would love to claim as its own.
– Rob Hunter, Film School Rejects 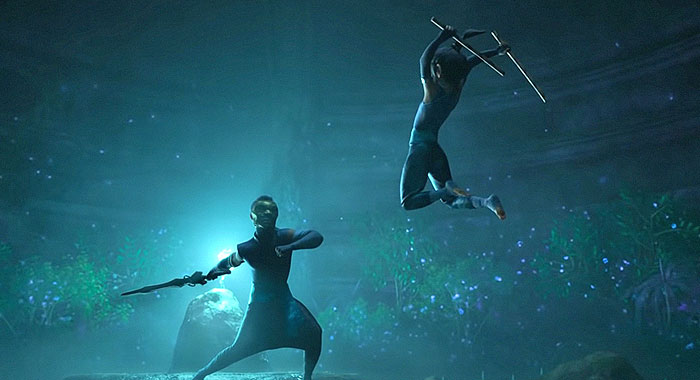 There’s a strain of wacky comedy that feels more in line with an early 2000s DreamWorks movie.
– Hoai-Tran Bui, Slashfilm

When your gag is done better by the dopey penguins in the Madagascar movies, you know it’s run its course.
– Jacob Oller, Paste Magazine

Will it move you?

Raya and the Last Dragon is so rooted in emotion, that this motley crew is capable of kicking up big laughs and more than a few tears.
– Kate Erbland, IndieWire

There were many moments that I sat crying, and others where I cheered on Raya and her unlikely crew.
– Tessa Smith, Mama’s Geeky

The swelling emotional finale may elicit tears or eyerolls depending on your point of view (definitely the former for me).
– Brandon Katz, Observer

Does it teach any valuable lessons?

This animation speaks to themes of unity we are in dire need of learning right now, and it does it in the most powerful way, by wrapping the truth up in action and sweetness.
– Sherin Nicole, idobi.com

Trust is a key theme in Raya and the Last Dragon, as evident in how often it’s mentioned, and it’s a lesson we could all stand to hear, see, and practice more often.
– Rob Hunter, Film School Rejects

There are certainly worse lessons a movie could impart under present circumstances, and the filmmakers ponder it here with disarming sincerity and seriousness.
– Justin Chang, Los Angeles Times

If any movie can restore faith in humanity again, this is it.
– Christie Cronan, Raising Whasians 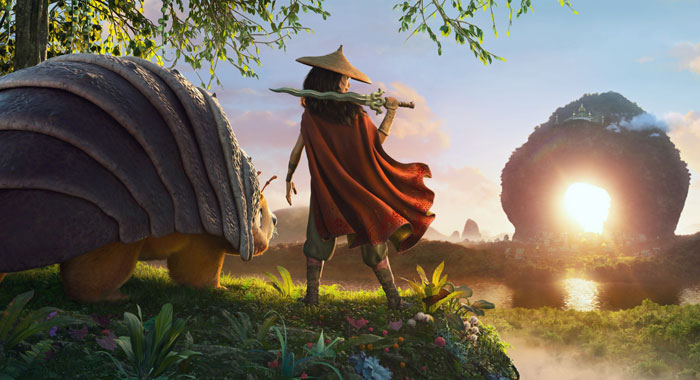 Does it have any problems?

If there is anything to fault in this movie it would be the lack of songs.
– Tessa Smith, Mama’s Geeky

This film desperately lacks the kind of soaring, iconically open-hearted sequences that made revered classics like The Lion King and Mulan stand the test of time.
– Matt Conway, Battle Royale With Cheese

The film doesn’t flow so much as lurch from one big set-piece to the next, raising significant logic questions along the way.
– Peter Debruge, Variety

Raya and Sisu’s friendship never fully develops. Akin to The Fifth Element, Raya treats Sisu more as a weapon. One that needs to be hidden rather than as a living creature.
– Robert Daniels, The Playlist

Is it OK for younger viewers?

There are some scary moments that may frighten little ones, especially with the Druun, which is a dark mist-like monster.
– Tania Lamb, Lola Lambchops

The Druun is scary — it moves quickly and is quite ominous…some sensitive ones might really be taken aback by it.
– Tessa Smith, Mama’s Geeky

I would compare the violence easily to that of Moana, Tangled, or the animated Mulan. Very easily digestible for little kids.
– Christie Cronan, Raising Whasians

Will it leave you wanting more?

It feels almost a pity when the movie ends and we have to say goodbye to the whole gang before we got to see them do still more fun stuff.
– Angie Han, Mashable

Raya and the Last Dragon is in theaters and available as a premium rental on Disney+ on March 5, 2021.