7 Behind-the-Scenes Secrets From the Set of Powerless 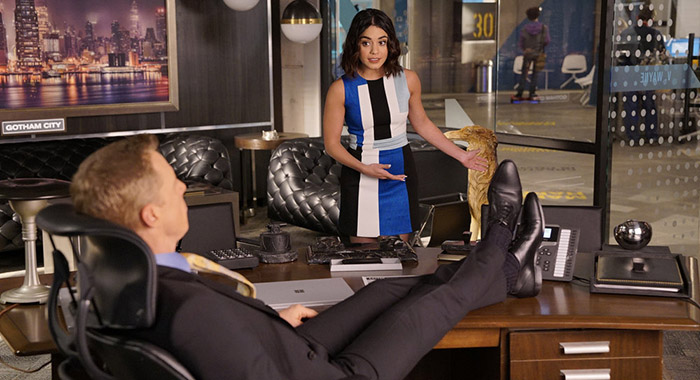 DC TV’s new sitcom, Powerless, about the regular folks living in the superhero-inhabited world of Charm City, USA, sees the comic book giant take a step into the comedy world.

The series, which debuted February 2 on NBC, stars Vanessa Hudgens as the bright-eyed and optimistic Emily, the new head of a research and development team at Wayne Security — a subsidiary run by Bruce’s slacker cousin, Van (Alan Tudyk) — and the slightly more cynical team around her that invents useful tools for everyday people dealing with superhero destruction all the time.

RottenTomatoes spent an afternoon on set with Hudgens, Tudyk, Ron Funches, Danny Pudi, and Christina Kirk, and documented what we saw as the cast filmed the eighth episode of the season. Here are seven things we learned after a day in Charm City.

1. Wayne Security Has an Almost-Functional Office 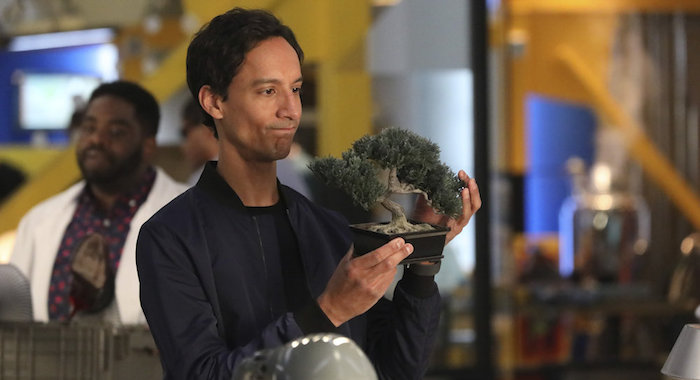 Not only are there working computers at the desks in the Wayne Security office, but the entire set — where most of the show is filmed — essentially looks like a real-life workspace with an open-office floor plan. These aren’t separate sets: the lab, the kitchen, the conference area, the desks, and Van’s fancy wood-paneled office are all connected. 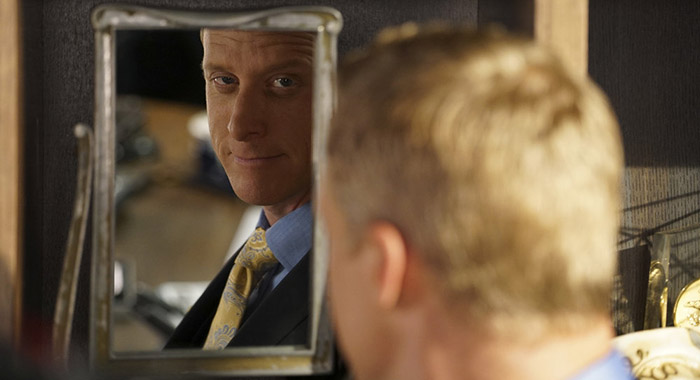 “The scripts are really funny. It’s not a lot of changing what’s there,” Tudyk said — but as RT discovered watching take after take of the scene the cast was filming that day, there is room to explore.

“Everybody does their own little bits here and there,” Hudgens revealed. “I feel like Alan does the most. He just comes on set and starts rambling off his own lines that he’s created and they’re always great.”

In an early episode, Tudyk even wrote his own song: “I sang a song a couple of episodes ago. I sang two songs. One of the songs was the one they wrote me, and then the other one…I’ve never done that as an actor. I don’t know what came over me, but I came in with three or four numbers.”

“I really like working with Danny,” Funches said. “He’s really fun to play off of. If you improvise anything, he doesn’t need you to be like, ‘Hey, I’m going to do this so be ready,’ he’s just ready. So if I change something up, he just goes with it.”

3. The Inventions Are Super-Useful, But Maybe Not Super-Cool 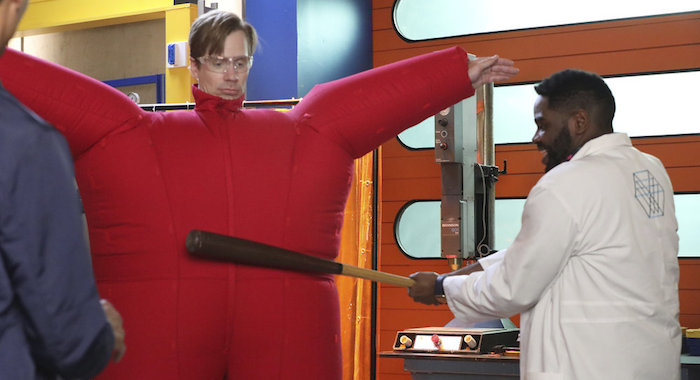 There’s a Shark Tank vibe going on in the Wayne Security R&D lab as the characters come up with inventions to help make the constant superhero- and supervillain-induced destruction in Charm City easier for residents to handle. Take, for example, the Rumbrella, which gives the user protection from falling rubble.

“Our products work, but they’re not necessarily some of the most practical things in the world. You use them, [it’s] just that carrying them around would be taxing,” Hudgens explained.

One gadget that was really cool to see, though: a real-life Batarang, Batman’s boomerang-esque bat-shaped weapon.
“I was just very excited to touch it, you know? It’s also very heavy,” Pudi revealed. “They do a good job here about crafting things that are true to their weight.”

4. Where Is Charm City, Anyway? 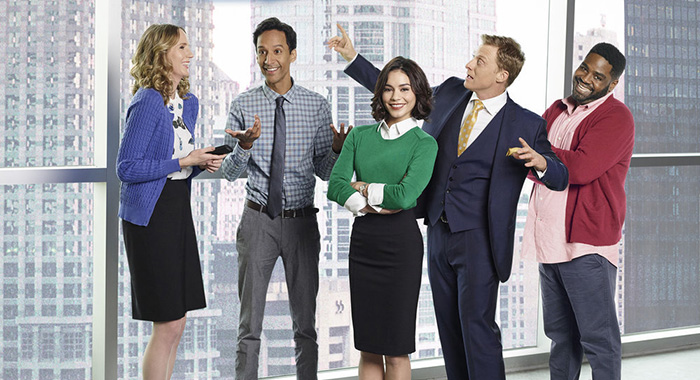 Showrunner Patrick Schumacker thinks that Charm City might be located near Cleveland, but writer Sabrina Jaleese, who penned episode eight, has a slightly different take.

“It’s definitely wherever Scranton is. Not too far from Scranton. It’s definitely not the place to be,” Jaleese said. “It’s big enough that Emily comes from a smaller place, and she’s excited to be there. It maybe has that New Jersey vibe, of like a lot of people would rather be a couple towns over in Metropolis or Gotham. It’s definitely an underdog city. So insert whatever town you wanna knock there, and that’s where you’ll find Charm City.” 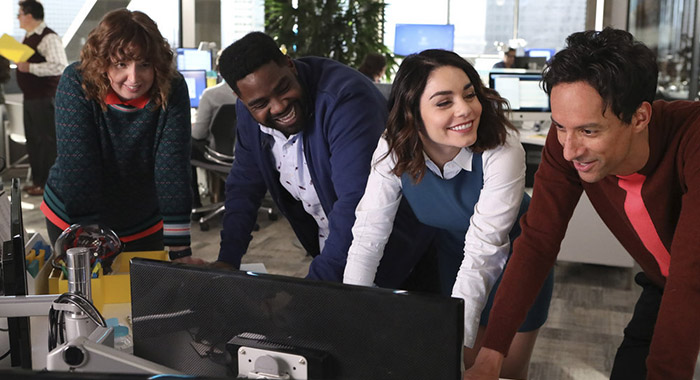 Funches, who is a huge comic fan and reads Teen Titans with his son, said he wants to see Green Lantern in Charm City sometime.

“Green Lantern is probably my favorite superhero of all — John Stewart if you want the specific one,” Funches said. “I would love it if maybe he lost the ring, and I found it and I was just like, ‘Oh, it works for me!’ That would be great. I like that.”

One other thing he wants to see: “Also just making out with Supergirl, whether it’s on the show or off the show. Whatever she’s interested in, really,” he joked.

6. There’s Not Technically a Musical Episode, But… 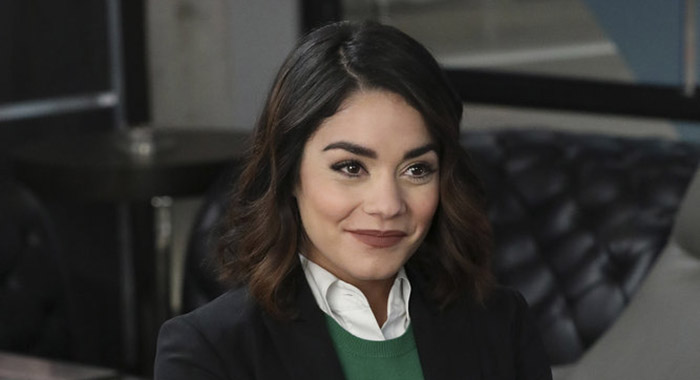 If you’re on the set of Powerless, there’s a 100 percent chance that you’ll hear Hudgens singing. The Grease: Live! star sings literally any chance she can get.

During our afternoon visit, she sang everything from the blues classic “At Last” to the Disney classic “Part of Your World” — and sounded great, too.

Some musical moments might make it on screen — “musical things happen sometimes,” Hudgens dished — but there’s not a full-on musical episode scheduled (yet).

“I’m singing all the time so maybe we’ll give them a hint,” she added.

Hint taken, promised Schumacker: “Every day on set is a musical episode with Vanessa. We don’t have any immediate plans to do it for this season but knock on wood — if we get a second season, I think that would be in order.”

7. They Have More Future Plans 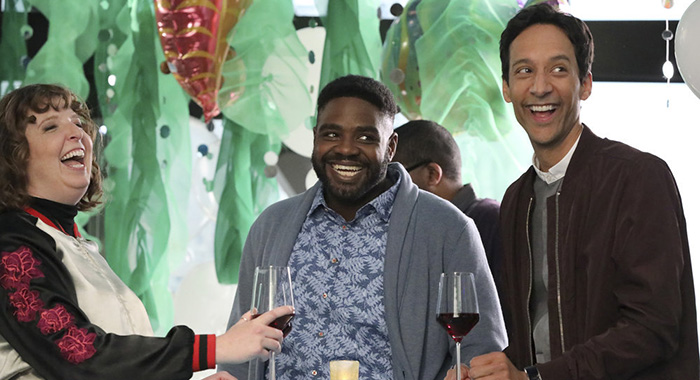 “A lot of times it’s me and Danny and Jennie [Pierson sharing scenes together],” Funches said. “We have our own little nickname: they call us ‘TNT,’ the noisy three, which is fun. I think it’s cute. We’re going to get matching leather jackets if we get a second season.”