Phoebe Waller-Bridge and Donald Glover Will Costar in Mr. and Mrs. Smith Series

The Fleabag and Atlanta creators will executive produce the series for Amazon Prime Video. Plus, Ruth Negga will star in a Josephine Baker limited series, The Mandalorian fires Gina Carano, and more of the week's top TV and streaming news.

Some collaborations are just unexpected enough to be absolutely perfect. Case in point: Donald Glover and Phoebe Waller-Bridge on a Mr. and Mrs. Smith series adaptation. Plus, The Mandalorian parts with a star, the Obamas announce their production slate, new The Falcon and The Winter Soldier trailer, and more of the week’s top TV and streaming news.

TOP STORY
Atlanta and Fleabag Stars Sign On for a Mr. and Mrs. Smith Series 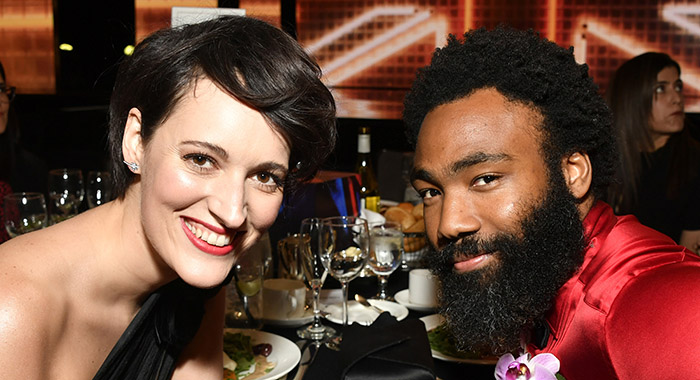 Award-winning writers, producers, and stars Donald Glover and Phoebe Waller-Bridge have teamed up to create and star in Mr. and Mrs. Smith, a new series based on the 2005 film that will stream on Amazon Prime Video in 2022.

“Talk about the dream team! Donald and Phoebe are two of the most talented creators and performers in the world. It’s truly a dream for us, as it will be for our global audience, to have these two forces of nature collaborating as a powerhouse creative team,” Jennifer Salke, Head of Amazon Studios, said in a statement. 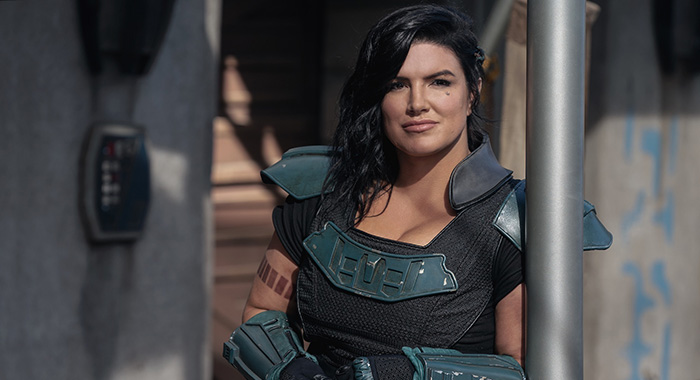 The Mandalorian star Gina Carano, who plays mercenary Cara Dune, has been dropped by Lucasfilm from the Disney+ series, after controversial Instagram story posts she made this week comparing current political divisiveness to treatment of Jews in Nazi Germany. The posts were removed, but Carano was also dropped by UTA as a client, Variety reported.

Lucasfilm released a statement on Wednesday night with a spokesperson saying: “Gina Carano is not currently employed by Lucasfilm and there are no plans for her to be in the future. Nevertheless, her social media posts denigrating people based on their cultural and religious identities are abhorrent and unacceptable.”

Carano later announced to Deadline that she has undertaken a new film project with conservative website The Daily Wire, saying “The Daily Wire is helping make one of my dreams — to develop and produce my own film — come true. I cried out and my prayer was answered. I am sending out a direct message of hope to everyone living in fear of cancellation by the totalitarian mob. I have only just begun using my voice which is now freer than ever before, and I hope it inspires others to do the same. They can’t cancel us if we don’t let them.”

The Obamas Announce a New Slate of Netflix Series 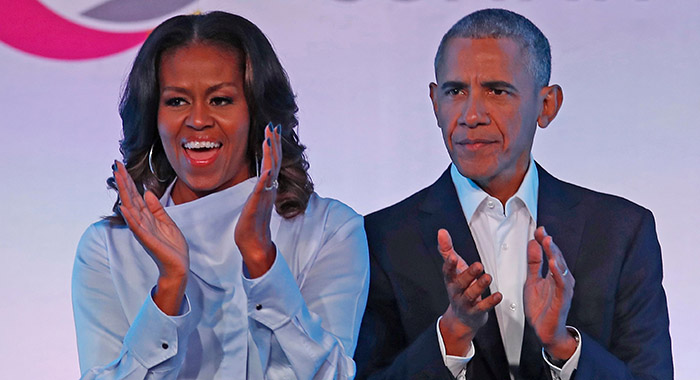 Barack and Michelle Obama unveiled six new Netflix TV series from their Higher Ground Productions, including a drama starring Riz Ahmed and a YA thriller. The projects:

• Exit West, starring Riz Ahmed as one half of a married couple who have to flee their country through a series of magic doors during a civil war, based on the book of the name since Mohsin Hamid’s acclaimed novel.

• Firekeeper’s Daughter, a young adult series about a young Native woman who goes undercover on her reservation for a police investigation. It’s based on an upcoming book by author Angeline Boulley.

• Great National Parks is a natural history docuseries spotlighting the most beautiful national parks from around the world.

•  The Young Wife is a drama about a 29-year-old woman on the day fo her first wedding.

•  Tenzing is a documentary about Tenzing Norgay, the first man, along with Sir Edmund Hillary, to reach the summit of Mt. Everest.

•  Ada Twist, Scientist is an animated preschool series based on the best-selling book series by author Andrea Beaty and illustrator David Roberts featuring a young Black scientist who will explore helping people through scientific discovery, collaboration and friendship.

• The G Word with Adam Conover,  a hybrid comedy series hosted by Adam Conover (Adam Ruins Everything), is based on The Fifth Risk: Undoing Democracy by bestselling author Michael Lewis (The Big Short, Moneyball).

The Falcon and the Winter Soldier trailer that premiered during the Super Bowl featured one major surprise, and it’s not one we’re going to spoil here just in case you missed it. Stars Anthony Mackie and Sebastian Stan. Premieres March 19 (Disney+) 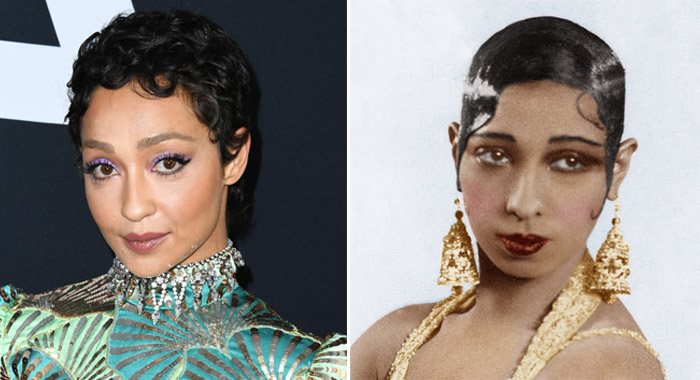 Renee Zellweger will star in the NBC limited series The Thing About Pam, a true crime story that centers around a man convicted of killing his wife, only to have the conviction overturned and his wife’s friend, Pam Hupp (Zellweger), involved in his saga and her own nefarious plots. NBC’s Dateline covered the saga in several episodes, and a companion podcast of the same name will also be source material for the six-episode series that marks Zellweger’s first broadcast TV series role. She is also an executive producer on the series.

Claire Danes will star in the Apple TV+ series The Essex Serpent, based on the novel of the same name by Sarah Perry. Danes will play Cora, whose abusive husband recently died. She moves from London to a small village in Essex where a local superstition claims the titular mythical creature has returned to the area. Danes replaces Keira Knightley, who dropped out of the project because of rising COVID cases in England.

Schitt’s Creek star Emily Hampshire will star in and co-write a remake of Norman Lear’s cult classic 1976-77 syndicated soap opera spoof Mary Hartman, Mary Hartman. The original series starred Louise Lasser as an Ohio housewife whose life was filled with strange occurrences, like her husband’s former coach drowning in a bowl of Mary’s chicken soup. In the remake, Hampshire will play a small-town woman whose life changes dramatically when she becomes a celebrity on social media.

Chiwetel Ejiofor will star in Paramount+’s The Man Who Fell to Earth series based on author Walter Tevis’ book and the 1976 movie adaptation that starred David Bowie. The drama finds Ejiofor playing an alien who comes to Earth at a pivotal time, and will determine the future of human beings while dealing with his own past.

Saturday Night Live and Single Parents alum Taran Killam will star in the CBS comedy pilot Welcome to Georgia, as an airline pilot whose wild mother-in-law (Elizabeth Hurley) moves in with him and his wife (Hannah Simone) to help them raise their toddler when they both have major job successes at the same time.

Harry Hamlin will play Tom Brokaw and Dylan Baker will play FBI agent Ed Copak in The Hot Zone: Anthrax, season 2 of National Geographic’s anthology series. The season covers the anthrax attacks that happened in 2001 after 9/11 and the hunt for the terrorists who committed them. Brokaw not only covered the story, but became a part of it when he was sent a letter filled with a lethal amount of the substance, which made two of his assistants ill. (Deadline)

American Horror Story season 10 will feature the return of Frances Conroy, but her role, like the theme of the season, remains a mystery.

Christina Milian will take over the role of Collette on the dance drama Step Up, the character played by the late Naya Rivera. Rivera played the role for the show’s first two seasons on YouTube. Step Up moves to Starz for its third season.

Mira Sorvino and Merri Dungey have joined the cast of Shining Vale, Starz’s horror-comedy series about a dysfunctional family that moves into a house that may be haunted. Courteney Cox is Pat, the mom who is either depressed or possessed, and Greg Kinnear plays her husband. Sorvino will play Rosemary, who is Pat’s alter ego, the other part of her split personality, her id, her muse, or a demon, while Dungey will play Pat’s best friend. (Deadline)

PRODUCTION & DEVELOPMENT: Game Of Thrones Creators Set Up Their Third Series at Netflix 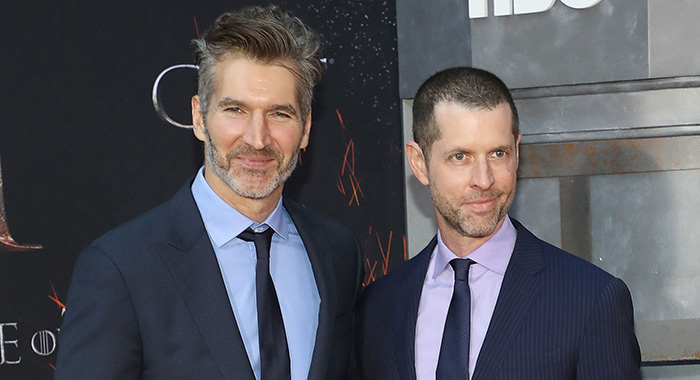 Game Of Thrones creators David Benioff and D.B. Weiss have set up series at Netflix: an adaptation of The Overstory, author Richard Powers’ Pulitzer-winning 2018 novel about a group of people drawn into an impending catastrophe in a parallel world most people can’t see. Powers and Hugh Jackman will also be producers on the project, which is the third series Benioff and Weiss have set up as part of their five-year, $250 million with the streaming service.

Alexa Super Bowl ad star Michael B. Jordan signed a deal to produce TV shows for Amazon Video, and his first project for the streaming service will be a limited series, The Greatest, about Muhammad Ali. Jordan, who plays Apollo Creed in the Creed movies, will not star in the scripted series, which he is making in partnership with Ali’s estate and Jay-Z’s Roc Nation. (Deadline)

James Cameron is teaming with McG and Burn Notice creator Matt Nix on a True Lies series pilot for CBS. Cameron tried to create an adaptation of the Arnold Schwarenegger/Jamie Lee Curtis/Tom Arnold movie more than three years ago at Fox, then with producer Marc Guggenheim and McG. (TVLine)

As part of his nine-figure development deal with ViacomCBS, Yellowstone creator (and one-time Sons of Anarchy star) Taylor Sheridan will create a Yellowstone prequel series titled Y: 1883, about the Dutton family of the original series, and how their hard-fought move to Montana took them from poverty to wealth.

Director and actor Tom Verica, who starred in How to Get Away With Murder, has been made the head of creative production at Shonda Rhimes’ Shondaland, where he’ll work on shows like Bridgerton and the upcoming Inventing Anna. (THR)

Among pilots ordered by The CW: a live-action remake of The Powerpuff Girls from Diablo Cody; a series about DC Comics superheroine Naomi from Ava DuVernay; a remake of the USA series The 4400; and a dramedy about a pair of young nuns from Jane the Virgin producer Jennie Snyder Urman.

FX has ordered a pilot for The Spook Who Sat by the Door, based on Sam Greenlee’s 1969 fiction book about the first Black CIA officer, who goes through all of the agency’s training to be an agent, only to be assigned to the equivalent of the photocopy room. Lee Daniels is executive producer on the project, with Leigh Dana Jackson (Scream, Sleepy Hollow) writing and Gerard McMurray (The First Purge) directing the pilot.

Rick and Morty and Community creator Dan Harmon’s first project as part of his deal with Fox will be an untitled animated comedy about a family made up of humans, gods, and monsters who are trying to peacefully govern one of the world’s first cities together in ancient Greece.