Pennyworth Revels in the Early Adventures of Batman's Butler

It is definitely the question people ask when they hear about Epix’s new series Pennyworth: “Why make a show about Batman’s butler?” The answer may lead to one of the smartest programs based on a comic book character to debut during this golden age of television. And when Rotten Tomatoes put the question to showrunner and executive producer Bruno Heller, he said the fun of making Pennyworth is in the challenge of answering it.

“It’s sort of like making a transcendent cheese sandwich,” he said. “Not because the expectations are low, [but] because it’s hard to see, initially, what you could do with that.”

The series opens with Alfred Pennyworth (Jack Bannon) freshly discharged from the army and ready to start a new life as the head of his own security firm with some of his mates from the service. But a chance encounter with American millionaire Thomas Wayne (Ben Aldridge) puts his future on a decidedly different course.

For Bannon, who said he felt “defensive” for Alfred now that he plays him, suggested the reason to make a show about the character stems from another question buried in the Batman mythos: “He is the guardian and teacher to the greatest superhero of all time. How does he know that stuff? How does he know how to be knowledgeable and understanding of the trauma, and the fighting evil, and all this?”

“There’s a whole world to Alfred, which is what we explore,” Aldridge added. “But also, the series explores Thomas and Martha Wayne, [Batman’s] parents, which we know very little about, obviously, because we only ever see them die. So, it kind of fills in all of those blanks.”

The blanks, as it happens, also offer Heller a format steeped in DC Comics lore without masks and superpowers.

“I love superheroes, [but] I don’t really know how to write them,” he said. “Alfred is a real person. Him and Commissioner Gordon, they’re kind of human beings in the canon.”

Their humanity in the face of theatrical villains and masked vigilantes made them great anchors for television series set in wilder worlds. Although, the wildness of Pennyworth is based less in the superhero tradition and more in a British mode, which is fitting for the character.

For fellow executive producer Danny Cannon – who also worked on Gotham – the blanks in Alfred’s story allowed him to try something different: a DC show set in 1960s London.

“[It is] a place that both myself and Bruno knew rather well,” he explained. “[We] also had a vision on what that world should feel and sound like.” Alfred was uniquely suited to open that world up.

Their vision of a DC Comics London will be one of the things viewers will immediately note about the show, both in its style and the way it offers clues to the story under Alfred’s feet. Small anachronistic details creep into the margins and the sort of “nevertime” Gotham used starts to appear.

“It’s as if it’s sort of a dream London where anything, any point in the history of the country, can be there, but anchored in the ’60s,” Heller said. And as Alfred finds himself pulled deeper into Thomas’ world, a very specific event in British history seems drawn into the setting. 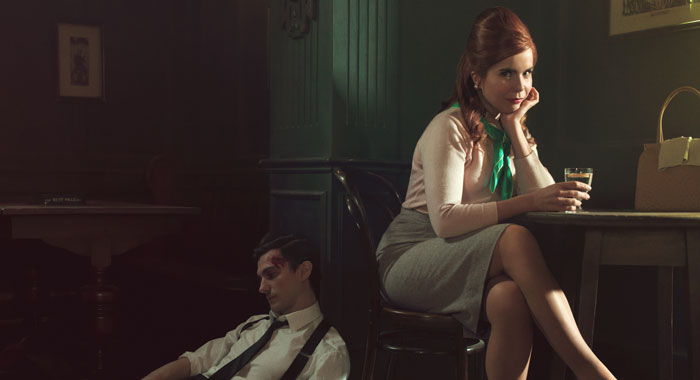 But first, we need to talk about Bet Sykes. Played by Paloma Faith, the dedicated contract killer immediately takes possession of any scene she appears in. For Faith, the character as written by Heller reminded her of people she knew.

“Growing up in London, there had been a couple of times in my early life where I’ve actually met real gangsters, and their wives have this very distinctive, very nuanced way … usually, they’re very glamorous and empowered, but majorly insecure at the same time,” she explained. “So, it was like kind of trying to channel that. They were always a bit threatening.”

When viewers first meet Bet, that threatening edge will be immediately apparent, but they will soon discover a gentle side to the character as well.

“She’s got a very sort of distinct differentiation between when she’s at work and when she’s not at work,” Faith said. “Having had a career that’s very public myself as a musician, I can really empathize with that idea of putting on your work face and putting on your home face. That played into the way that I played her.”

And just as Gotham humanized the Riddler, Barbara Keen, and other seemingly manic foes, Bet quickly becomes a layered and interesting character.

“She’s still a human being,” Faith said. “[She] craves human touch, and connection, and to be understood.” 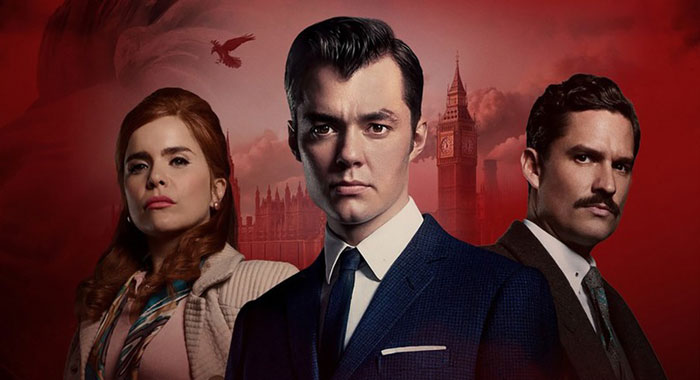 “I think it’s something that will always be with him,” Bannon said. “I think he’s grown up, essentially, in the Army, his formative years anyway. And it’s a little bit like a strange addiction. He knows it’s bad for him, but he keeps being drawn back.”

“I also think they’re all quite desensitized in the world of this as well, because it is a violent world,” added Faith. “So, [it’s] their perception, and then we have to sort of shift ours when we view it.”

And as Faith’s comments suggest, Pennyworth is more violent and graphic than most of its DC-inspired cousins (Swamp Thing comes close). To Heller, reaching for a new level of on-screen violence was an important evolution.

“There’s an honesty when you portray violence, as shocking as it is, to make it shocking,” he explained. “That’s what violence is really like.”

As opposed to the comical sound effects of Batman ’66 or the relative bloodlessness of network shows, Heller said the violence and its implications were important to convey and establish early.

“What happens is you bleed, you die,” he said. “It’s not meant to be sensational. It’s just meant to be true to both the sensibility of the myth and the reality of violence.”

Despite the violence on display in the series, Pennyworth is filled with humor – from the absurd to the driest of quips worthy of Batman’s butler. It was an element of the show which surprised the cast once they began to see finished episodes.

“I know the jokes were there,” Aldridge said, “but there were other moments I hadn’t read as funny at all.”

In the first episode, some of these moments involve a gun-toting granny, the owner of the club where Alfred and Thomas meet, and a very unusual torturer.

“Alfred says at one point, ‘Life is either a tragedy or a comedy, and I prefer to have a laugh.’ And that’s kind of true,” Heller said when asked about juggling the show’s grimmer moments and funnier elements. “There has to be light, because on one level it’s a very bleak and dark view of the world. So without shafts of light, you’ve just got darkness as opposed to shadows and light.”

“For me, when I think about being British, the most proudest thing about it is the humor, for me,” Faith added. “So it’s so important that it’s in there.” 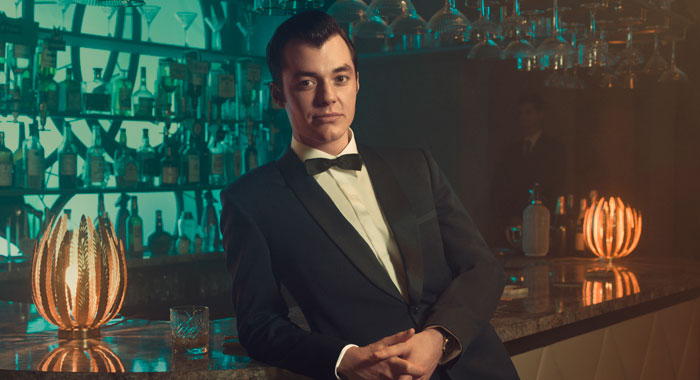 Which brings us back to the question – why make a series about Batman’s butler? Because he offers a uniquely British story to the DC Universe, one that also features an examination of British class struggles.

“I feel like in America, you’re kind of raised to believe that whichever class you come from, you can achieve anything,” Faith said. “I remember being sort of the 17-year-old literature student, being like, Oh, the American Dream — like, never heard of the possibility until then of being able to actually sort of contradict the class you were born into.”

In the British tradition, social mobility is much harder. And into the 1960s, it was something parents actively discouraged their children from attempting.

“The ’60s was the first time where people were starting to live their own lives and have their own ideas, and Alfred is the perfect guy to break away from the military and from their old-school way of thinking,” Cannon said. “He’s filled with optimism and a new energy, and he’s looking towards the future.”

Nonetheless, Alfred will face obstacles in finding that future simply because of the station he was born into.

“One of the things that you notice when looking at past portrayals of Alfred is that, to a degree, Michael Caine was the first guy who played the character as he would be in real life – which is working class,” Heller said. “And that servant class was always in a weird, anomalous position of serving the upper classes, but never being able to cross that line. Alfred is someone who has lived his own life and does not want to be servile, does not want to be dependent on the largess of the aristocracy. So that conflict is built into the character.”

The conflict will also be writ large in the series as tensions in the country lead to sectarian violence and the potential for a British Civil War, the event seemingly imported from history into the 1960s of Pennyworth. 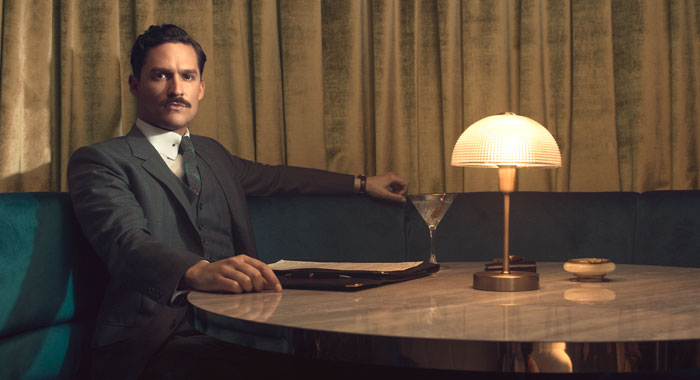 At the same time, Bannon admitted that Alfred is “blown away” by his new wealthy American associate, Thomas: “He talks differently, he looks different — [Alfred has] never really seen anyone like that.”

Thomas’ movie-star quality may offer some clue as to why Alfred will ultimately become a butler and work for the Waynes. Granted, it will take more than good looks and a seemingly endless supply of cash to bond Thomas and Alfred for all time — but then, that is the story the series is setting out to tell while also sowing the seeds of a class war.

And as all moderns series consider their conclusion from day one, the cast and producers of Pennyworth jokingly suggested its natural endpoint will either be the birth of Bruce Wayne or his conception. Although, Faith suggested Bruce’s birth could come with a further revelation.

“I’d love to see Jack dressed as a baby coming out of Martha,” she joked. “Alfred’s actually his dad, and you’re [playing] the baby!”

“That’s very meta and crazy: Me in a little bonnet,” Bannon said. 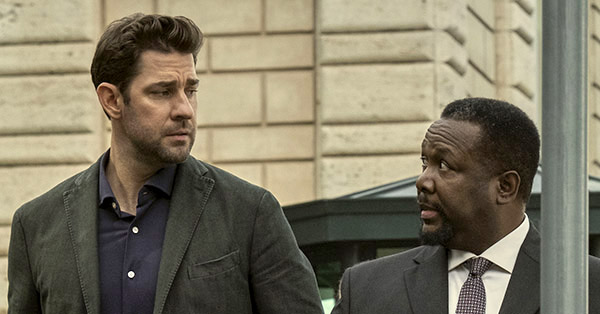