Outer Range’s Josh Brolin: 'Is It Hard To Act to a Hole? Yes'

Creator of the "metaphysical Western" Brian Watkins and the cast talk about building this neon-pierced cowboy story.

If you’ve seen posters or trailers for Prime Video’s new series Outer Range you probably know a couple of things about it: Josh Brolin plays a rancher who discovers a mysterious, metaphysical, and seemingly endless hole on his land. The image is gripping and, as Rotten Tomatoes discovered when we talked to Brolin, creator Brian Watkins, and other members of the cast, it is only the beginning of the drama, weirdness, and Clamato juice that the show will offer across its run.

But what is it like to act opposite a bottomless hole? “You rely on your imagination a lot,” Brolin said. “I’m going to react as if it’s happening at this moment, which is a totally imaginative part of your brain … if you’re actually thinking with that real part of yourself, even though it exists right there, all you’re going to think is, ‘This is really dumb. This is too embarrassing.’

“I’ve always said that acting is a profession of embarrassment,” he continued. “You just feel like a dips—. And then you shift into that other place, and then you’re able to do it. And then, hopefully, it will be something that entertains people, or people can actually identify with on a behavioral level.” 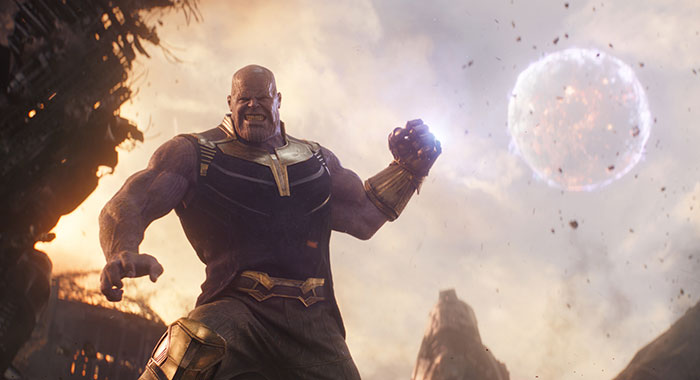 That philosophy also served him well when playing Thanos in the Marvel Studios films, which was largely an exercise in pretending the reality around him was real and physical.

“When you’re Thanos, and you have a proximity-like chest on — and my arms are short anyway — so only my hands are coming out, and Chris Hemsworth is coming at me with an ax, but there’s no head on it because they’re going to put that in later, and he is jumping off apple boxes, but those are falling, so he can’t get the leverage that he needs to reach me and all, it’s all really dumb, but you lend yourself to it 1000 percent anyway, and then you see the movie, and you’re like, ‘Wow. That’s amazing.’”

So even in Outer Range, where much of the reality is there on the day, he still committed to the heightened reality of his character’s circumstances, otherwise, “I would’ve been the reason it doesn’t work. Because all those other people did their job. So is it hard to act to a hole? Yes. Acting is unnatural anyway. So what does it matter if it’s a hole, or a spaceship, or a human being?” 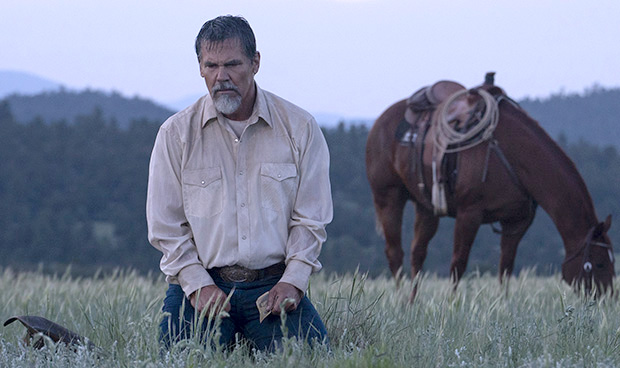 In the series, he plays Royal Abbott, the patriarch of a Wyoming ranching family facing various crises as the story beings. Son Perry’s (Tom Pelphrey) wife has been missing for some time. A portion of his land is likely to be seized by the nearby Tillerson family. His other son, Rhett (Lewis Pullman), is on the edge of washing out in the local rodeo circuit, and Autumn (Imogen Poots), a mysterious visitor from the city, is camping out in a remote part of the property. But Royal is very much the model of a rugged American west rancher and father, so he tries his best to compartmentalize all of these problems as best he can.

“He’s not in touch with his emotions,” Brolin explained. “And when you look at somebody, when you romanticize a typical Western movie, or Western story, you see that’s kind of a heroic stance to take and be this laconic, super proud, full of integrity kind of thing. But in Western stories, you never really get into what’s behind that or the consequence of that. And that’s why I love the hybrid of bringing this metaphysical element into it, the supernatural element.” 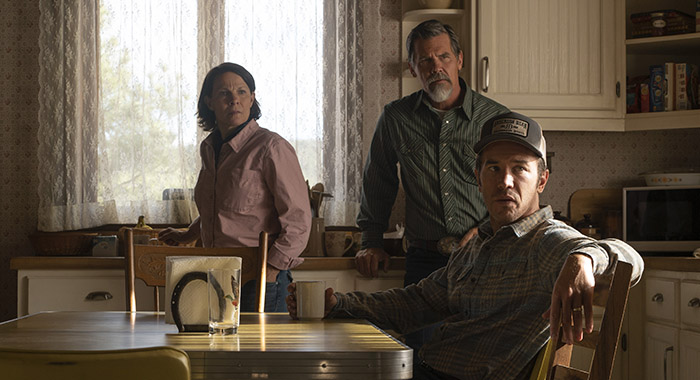 The supernatural element is a unique aspect of the series even as it builds up its drama – and even some comedic comedic moments – into a setting very akin to our own conventional reality. That juxtaposition is, according to creator Brian Watkins, part of the point.

“I grew up out West and the West for me has always been a place that is equal parts wondrous and strange,” he explained. “And it can evoke wry humor as much as it does mystery and thrill. And so, it’s the kind of place where you can walk up to the edge of a tree line and stare into a forest and feel like you’re entering another world.” And much like the mystery of the hole itself, the west can encompass the sort of “interior voids” present in Royal, his family, and even the Tillersons at the next ranch over.

Which brings us to Clamato. As viewers will soon discover, Tillerson patriarch Wayne (Will Patton) has a particular love for the clam and tomato juice beverage – an affinity the actor himself also had to find. “One sort of learns to like whatever the character is doing in order to survive it,” he said. “I had this very strange uncle when I was a little boy that was very much like Wayne Tillerson, and I feel almost like he was drinking something like that when I was a little boy. So I channeled that.” 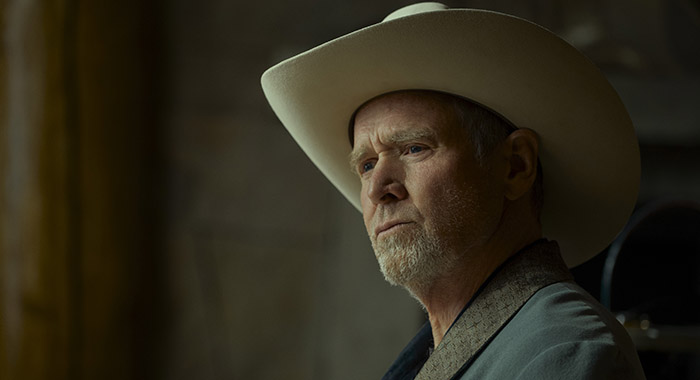 Beyond the Clamato, though, Wayne Tillerson has a way about him that, despite certain physical limitations, casts a large shadow across the land. “He does appear to be this sort of insensitive hunter, land grabbing [from the Abbots], but there’s a whole lot more there,” Patton said. For one thing, he genuinely cares about his three sons, Luke (Shaun Sipos), Trevor (Matt Lauria), and Billy (Noah Reid) – although the actor teased there is a clear favorite. “I’m not sure when you begin to see that … these relationships are complicated,” he said.

Those complications may also give viewers a sense about Luke in the initial episodes that Sipos suggested may not be the whole picture. “He’s worked his entire her life to be loved in a family that really has a lot of sharp edges and is a dangerous place. The world is cold and he’s really in a mode of survival and to survive, he has to thrive,” he explained.

According to Watkins, the first two episodes serve as an opportunity to break apart archetypes like the dutiful son or the stoic rancher: “To me, the most interesting stories are those that explore the moral territory that becomes fairly gray. We’re trying to paint a picture of a landscape that is at once traditional and beautiful [and full of] the family norms, but then it’s dashed with this slice of neon. Hopefully the story really evokes something closer to what it feels like to be alive, which is really oftentimes disorienting.” 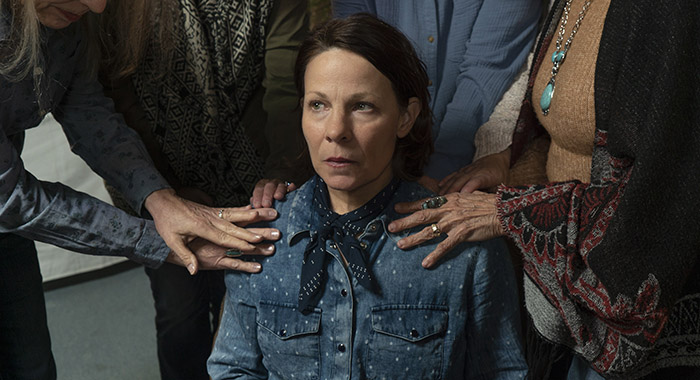 That disorientation also comes at a fast pace. As Lili Taylor, who plays Abbott matriarch Cecilia, noted, the story takes place over eight days or so, leaving her character to process things at breakneck speed.

“It was one of those things where you make a decision, and you don’t how serious the consequences are and they start to happen. They start to leak out and take over … [it] becomes untenable,” Taylor said.

The decision she makes, which is something of a spoiler, will no doubt come as a surprise to viewers, particularly as Cecilia is the keeper of the faith among the Abbotts. Even Taylor came away believing the character would have made a different choice 10 years earlier. 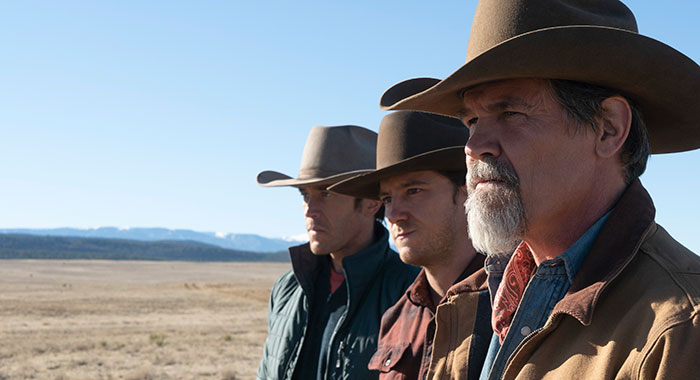 Of course, finding her way meant processing some of the secrets the family either withhold from each other or share in whispers. As with the Tillersons, those dynamics are as important to the program as the hole Royal finds. Rhett, for example, “gets left behind a lot,” according to Pullman. It leads to some of the self-doubt plaguing him as the story begins. Beyond constantly comparing his bull-riding career to Royal’s, though, Rhett “feels like he gives more to the family than he gets back.”

“I think that he gives a lot and he gets asked for things when his family’s in a dire situation. And he feels a little bit like he’s being used,” Pullman continued. “Whether that’s true or not, I think when we first meet Rhett, that’s where he stands.” Also, whether or not it is just Rhett’s perception of his role in the family or something the Abbotts consciously placed upon him is another mystery awaiting viewers. 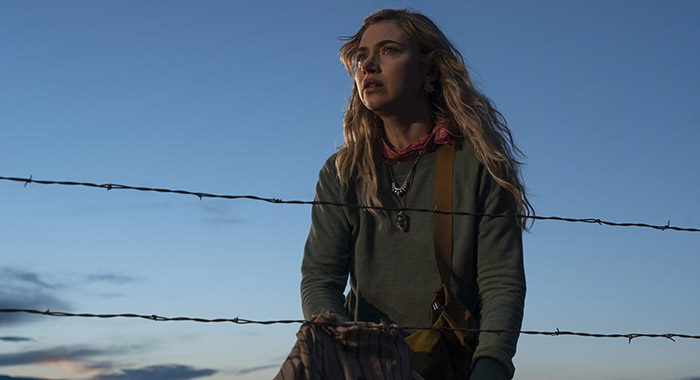 Speaking of mysteries, Poots’ Autumn represents one of the greatest enigmas the show presents in the first pair of episodes – and that’s even considering the hole itself. Poots described her as “just all the colors of the rainbow.” One of the colors appears to be the truth, but like so much about Outer Range, even that is metaphysical puzzle. If nothing else, her first scene suggests she may have a better handle on the situation that the Abbotts, but Poots was quick to say “anyone who claims to know too much, you don’t really want to trust them.” She also added the character has a streak of curiosity which “borders on quite dangerous.” 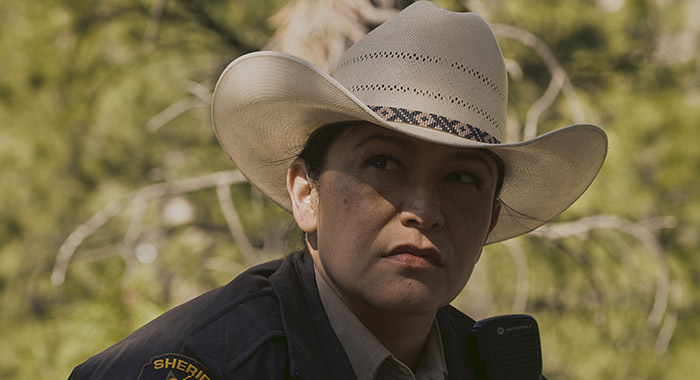 Trying to contain the danger around the county is Joy (Tamara Podemski), the acting sheriff following the death of her immediate superior. According to Podemski, Joy “was thrown into it, maybe before she would’ve been ready,” but tries her best to maintain order even as she has to run for office in order to keep her job – a fact which may lead to the first shade of gray viewers see with her.

“You really want to believe that she is so strong in her footing,” she said. “As much as I wanted to glorify her, she’s got to make some decisions of how you get those votes. And I’m not judging her, but I know that there’s certain careers that ask you to walk that line.” 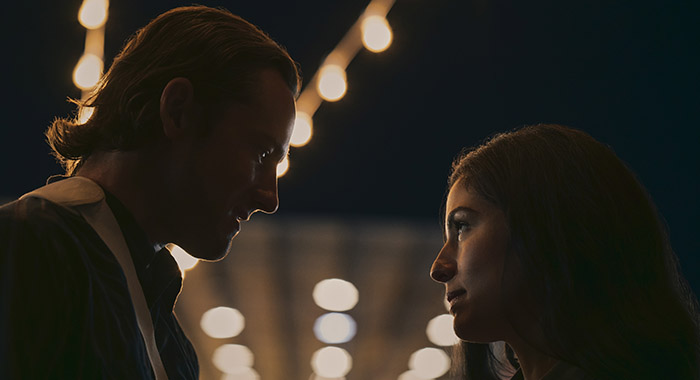 One woman with seemingly more clear-cut goals is Maria (Isabel Arraiza), a woman recently returned to town and trying to do her best in the wake of coming home.

“She is different because she’s had the experience of leaving,” Arrazia explained. “Then for circumstances outside of herself, she had to move back. She does feel like maybe a failure, but I think this time around, she reconnects with Rhett Abbott, this love that never was. And I think it kind of reveals to her new sides of herself.”

But with Outer Range, even a seemingly sweet TV romance could change in sudden moment or as a consequence of a poorly-made choice.

“There’s this line in the show, it says, ‘time is a motherf—er,’ Watkins said. “And I think it complicates our most virtuous selves and throws our beliefs and faith into a spin cycle. What we’re witnessing is what happens when the unknown triumphs over the known in someone’s life.”