The man behind the mask – well, one of them, at least – remembers an intense set that left his co-stars terrified, diving into the dark mind of Billy Loomis, and says the classic slasher has gotten fans through tough times. 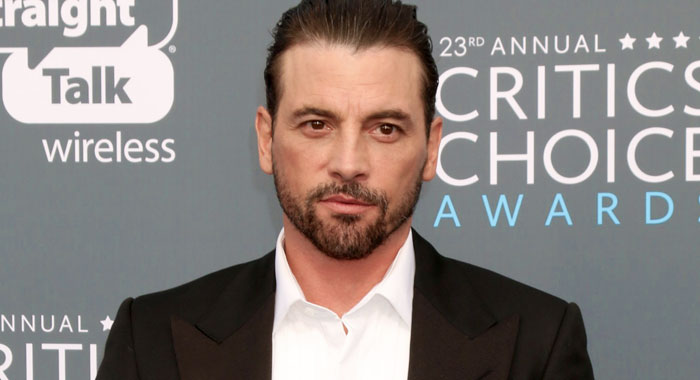 Twenty-five years ago, Skeet Ulrich was one of a group of young actors who – under the stewardship of a fresh screenwriter named Kevin Williamson and veteran director Wes Craven – would help change horror cinema forever.

In Scream, the groundbreaking meta slasher that turned the genre on its head and spawned a renaissance as it did so, Ulrich played Billy Loomis, boyfriend to the movie’s “final girl,” Sidney Prescott (Neve Campbell). Like Johnny Depp in Craven’s other huge teen slasher hit, A Nightmare On Elm Street, Ulrich left an impression as the broody heartthrob with an edge; unlike Depp’s Elm Street beau Glen, though, Billy’s edges turned out to be sharper than they first appeared. In the movie’s climactic sequence, we learn that it is he and goofy bestie Stu (Matthew Lillard) who have been on the other end of the phone, and under the now-famous Ghostface mask, all along: “Surprise, Sidney!”

Cut to two-and-a-half decades and three sequels later, and horror cinema is experiencing something of another renaissance, one driven partly by innovative slashers paying their own homage to Scream (see Freaky or Netflix’s Fear Street trilogy) and others wading in the nostalgia pool with sequels and reboots doing compelling things with their original sources (Halloween Kills, Candyman).

Scream itself is joining the fray, with a new sequel releasing in January that sees OGs like Sidney, Gale (Courteney Cox), and Dewey (David Arquette) mixing it up with a fresh young cast of characters ready to carry the baton… or knife for the franchise. And, in honor of the original movie’s big anniversary, a special 4K Ultra HD Blu-ray edition of Scream was just released on October 19.

To mark the occasion, we caught up with Ulrich to talk about his memories of playing Billy, the legacy of Wes Craven, and the night he got wild on set and his director had to ask him to tone it down because his co-stars were terrified.

“I had played mostly sort of soft characters, if you will, prior to that.” 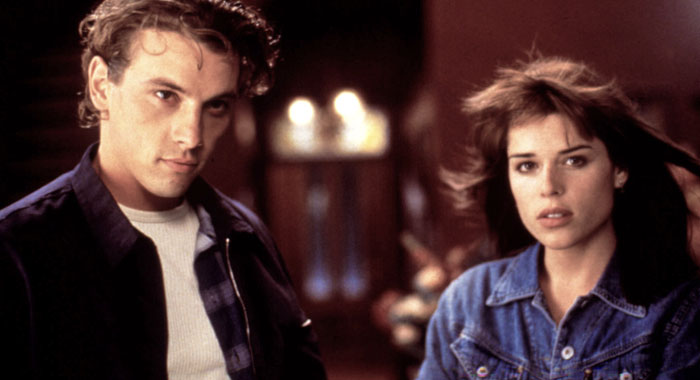 “I do [remember reading the script for the first time]. It was called ‘Scary Movie’ under the script that I got. I remember where I was. I was in from New York filming, God, probably The Craft maybe, and staying at a friend’s house. I remember tearing through it, being so intrigued by it. I had played mostly sort of soft characters, if you will, prior to that. So I felt like it was the first opportunity to really show all my anger and aggression.”

“I would sit in [the room I created for Billy] and read about serial killers and watch Faces of Death, if you remember that, to get into that gory mindset.” 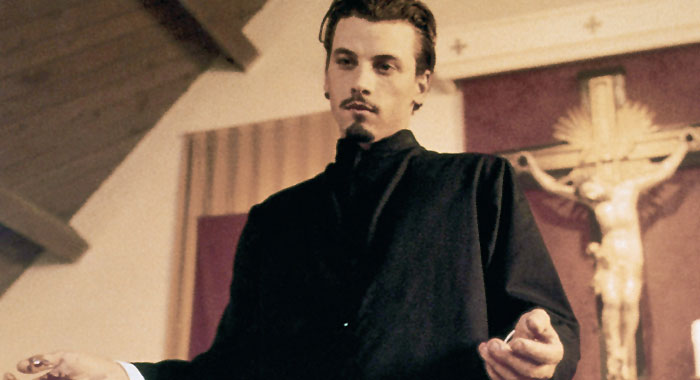 “I had just come off of a film called Touch, which was Chris Walken and I, and Bridget Fonda, a Paul Schrader film, an Elmore Leonard script. And I played the second coming of Christ in modern-day LA, the sweetest, most gentle character, and then had to switch rather quickly into Billy’s mindset.

So I arrived in Napa Valley, and I had basically a two-bedroom, a suite. I had my bedroom for sleeping, and then I took the suite and turned it into Billy’s room. And I went to the mall there and bought every punk rock poster I could find, black lights. I was 25, 26, playing 17, and really intrigued in sort of recapturing that high school feel. But also, I was into punk music in my teens and really just trying to recapture that angst, that raw angst. And it helped. I mean, I would sit in there and read about serial killers and watch Faces of Death, if you remember that, and kind of anything to get into that gory mindset.

I don’t do a lot of things that are labeled ‘method,’ but one that I found that really sticks with me through the years is trying to at least sort of live in a place that feels like the character would live there. In other words, I find it really hard to work from home. I have a nice house; if I’m playing a blue collar worker, I’ve got to remove that from my day and get into this need mindset. And so, it’s the one thing that helps me that I guess you could quasi-label ‘method’ that I did with that as well.”

“Wes was like, basically, ‘Skeet, can you just let it go for a minute? She’s scared.’”

“It was five nights of shooting that kitchen sequence. The reveal was something we’d been salivating to do, because it is that shift, and it is the shift for the audience as well.

We were keyed up doing that scene. We had shot up to the point where Gale Weathers comes in with the gun. And so, because we’re operating on such a high intensity for so long, they called Courteney from her trailer to come to set and to start to rehearse her section of it. And I just remember Matt and I, roaming around like caged animals, trying to keep the energy there and the intensity there and really not kind of dropping it. Of course, everybody’s working, setting up and doing this and that, and Courteney walks in and just sees the look in my eyes. And you could see her take a step back. And Wes was like basically, ‘Skeet, can you just let it go for a minute? She’s scared…’

I just remember this visceral response to the energy that was in the room when she walked in. And similarly, not long after that, I kick her out the door or whatever. And I remember talking to Wes, because I had that idea of the neck crack. I was like, ‘If I do it, will you add the sound in post? Because I can’t crack my neck.'”

“Wes was a real gift to all of us. And it’s something that stuck with me for years after filming that, that style of directing.” 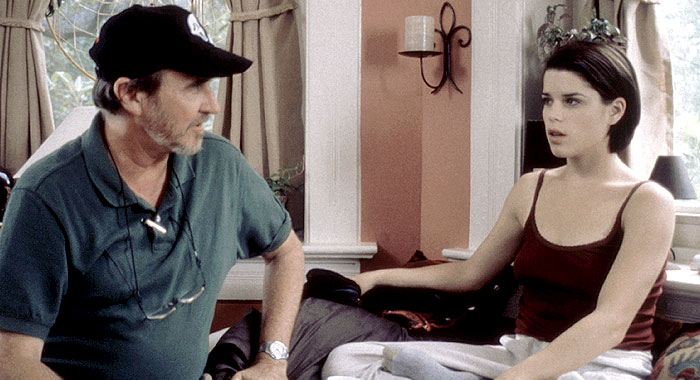 “Wes left a real impression on me as someone who was so present and so kind and so keyed into the story, but really keyed into us. And he just had such a gentleness about him, and he was able to sort of consolidate things into very simple ways of understanding them. I never saw an upset moment or an upset crew member, anybody. Everybody just really enjoyed being around him. He was a real gift to all of us. And it’s something that stuck with me for years after filming that, that style of directing.

I had not worked with any chair-throwers or anything. I had worked with Bruce Beresford prior to that, who would shoot dueling singles, your close-ups at the same time. And he would sit between the cameras, no monitor, nothing, and just watch. And he was literally a couple of feet away. And Wes had a similar feel – whilst using monitors. If you’re looking for a certain moment in the scene, you really hope that somebody’s truly, truly watching the minutiae. Otherwise you start sending it larger and larger and larger. ‘Did you notice that moment? Did you notice that moment?’ And it starts to lose its reality a little bit. But when you have somebody like Wes or Bruce Beresford – and there are many that I’ve worked with – but it was the first time I really homed in on how important that was for an actor, to know that the director is really present. And he had that in spades.”

“I get told a lot how this movie helped people through a hard time.” 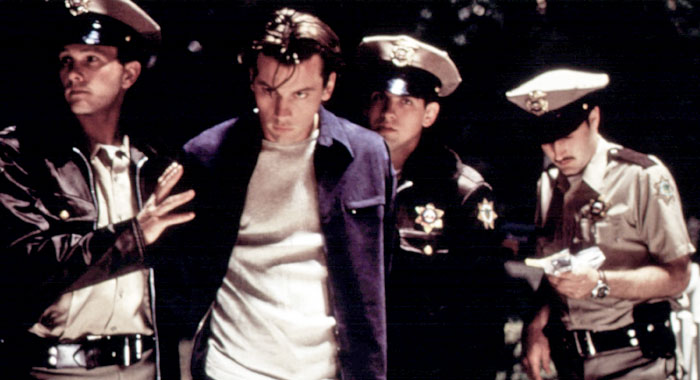 “There’s something I’ll steal from Matt, because I think it’s so true and poignant: It’s hard to scare people, and it’s hard to make people laugh, in terms of cinema. And when you can do both within moments of each other, it’s quite a visceral response from an audience, to be moved through those two emotions in such a brief amount of time.

I don’t know if that’s it across the board or if that’s even it at all. But I do know, doing conventions over the last several years, I get told a lot how this movie helped people through a hard time in their home life. So I think there was something in the release of the angst as well. There’s almost an outsider feeling to the characters, or at least there was to us in the making of the film, that I think speaks to a lot of people. And they verbalize it to me. So I know at least in that, the people that I’ve talked to about it or that openly discussed with me, they seemed to really hold this film in terms of what it got them through. They don’t necessarily get specific, but most mention, ‘It really got me through a hard time at home.’

So what that is, I’m not 100% sure, but I think that subculture really is about outsiders and finding a commonality amongst them all. And I think they feel that with us.”

“I haven’t seen Scream 2, 3, or 4, but I guess I could still answer [what I hope for Scream (2022)]. I don’t know in relation to 2, 3, and 4, obviously, but it’s the first one without Wes. I guess I hope in some ways that he’s happy and that there’s an honoring of him. I imagine there must be, that it must live up – I know certainly Neve and David and Courteney wouldn’t have jumped on board if it fell short of living up to the franchise.”