Plus, Disney+ special Disney Gallery: The Mandalorian satisfies your "Baby Yoda" itch, Netflix grabs film Enola Holmes with Millie Bobby Brown and Henry Cavill, and more in the biggest TV and streaming stories of the week.

HBO Max took center stage this week, revealing its launch date and lineup. Not to be outdone, Disney+ threw some Star Wars into the streaming-news mix, Netflix boasted a subscriber boost from our current stay-at-home culture, and Quibi promised that subscribers would soon be able to cast to their TVs.

The Star Wars TV universe continues to expand at Disney+: Variety reports Emmy-nominated Russian Doll co-creator Leslye Headland will write and act as showrunner for an as-yet-untitled SW universe series that will be told from a female-centric point of view. The new drama will also take place in “a different part” on the series timeline.

Variety also reported this week that a third season of The Mandalorian is currently in development at Disney+, well ahead of the series’ second season premiere later this year. The new project, and new seasons of The Mandalorian, join other Star Wars Disney+ shows, including Ewan McGregor’s Obi-Wan Kenobi series, Diego Luna’s Rogue One prequel series, the Disney Gallery: The Mandalorian docuseries (new trailer above), and the final season of The Clone Wars, currently airing in Disney+.

In other news from a particularly eventful streaming TV week:

• Netflix cautioned that the company fully expects its subscriber numbers to decrease once shelter-in-place lockdown plans are lifted, but for now, its news is good: the streaming service added 15.8 million new subscribers in the first quarter of 2020, for a global total of 182 million subscribers now.

RELATED: New on Netflix in May 2020: Space Force, The Lovebirds, Avatar: The Last Airbender, Hollywood, and More

• The NBCUniversal-owned Fandango (which also owns Rotten Tomatoes), has agreed to buy streaming service Vudu from Walmart. Vudu includes home rentals, as well as an ad-supported selection of free TV shows and movies.

• New streaming service Quibi announced its service, which offers programming in airtimes of 10 minutes or less, has been downloaded more than 2.7 million times since its April 6 release. Also, beginning next month, Quibi users will be able to cast the service’s programming to their TVs.

• And one more bit of news about that Friends reunion: one superfan and five pals will win a prize that includes tickets to the taping of the reunion special, plus the chance to have a cup o’ joe with the cast on the Central Perk set at Warner Bros. It’s all part of a fundraising effort for the All In Challenge, which raises cash for Feeding America, World Central Kitchen, No Kid Hungry, and Meals on Wheels. A $10 donation buys 10 entries for the contest at the All in Challenge website.

San Diego Comic Com, and various regional cons, are sadly among the many, many cancellations that have resulted from the coronavirus pandemic. But Wizard World has launched an ongoing series of virtual con panels, including upcoming events with the casts of The Boys, Gotham, Outlander, and Grimm. The Wizard World Virtual Experience with the cast of Outlander – including Lotte Verbeek, Steven Cree, Grant O’Rourke, Nell Hudson, Stephen Walters, and Annette Badland – will launch on April 30, followed later that day by an event with the cast of Grimm, including Silas Weir Mitchell, Sacha Roiz, Reggie Lee, Bree Turner, Claire Coffee and Jacquiline Toboni. Cast members of Gotham (David Mazouz, Sean Pertwee, Robin Lord Taylor, Erin Richards, Drew Powell and Peter Scolari) and The Boys (Jack Quaid, Antony Starr, and Karen Fukuhara) will chat with fans on May 2.

Fans can submit questions for a 45-minute moderated Q+A for each event. Tickets are also available for each cast for one-on-one video chats, recorded videos, and autographed photos.

Development News: Paul Rudd and Will Ferrell Will Star in Dark Comedy Series The Shrink Next Door at Apple TV+ 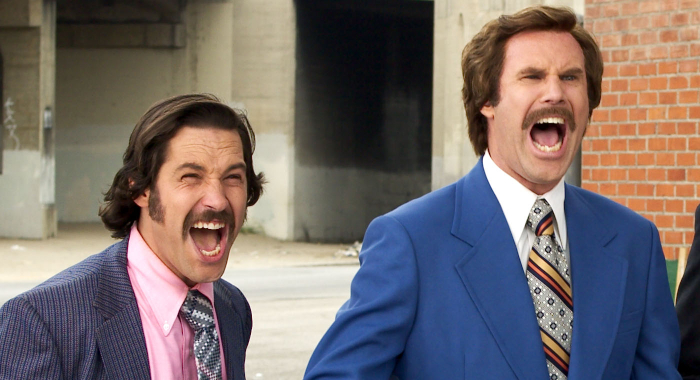 Apple TV+ will be the home of the Paul Rudd–Will Ferrell comedy miniseries The Shrink Next Door, inspired by the fact-based podcast of the same name. The eight-episode series revolves around the bizarre relationship between psychiatrist to the stars Dr. Ike Herschkopf (Rudd) and his patient Marty Markowitz (Ferrell). Ike eventually takes over Marty’s life, which includes moving into Marty’s home in the Hamptons and taking over his business. The Shrink Next Door description: “The series explores how a seemingly normal doctor-patient dynamic morphs into an unprecedentedly exploitative relationship filled with manipulation, power grabs, and dysfunction at its finest.” The series reunites Rudd and Ferrell for the first time since Anchorman 2.

Melissa McCarthy dramedy film The Starling has landed at Netflix. The film, directed by Ted Melfi and currently in postproduction, stars McCarthy and Chris O’Dowd as a married couple who face a major drama. Husband Jack takes off to deal with it, while Lilly remains home to deal with her guilt over the situation. A bird, a starling, in her backyard starts to harass her, and a psychologist-turned-vet played by Kevin Kline tries to help her. Timothy Olyphant, Loretta Devine, and Daveed Diggs also star. (THR)

Syfy will begin airing the first season of the DC Universe series Harley Quinn on May 3. The animated series stars Kaley Cuoco as the wickedly fun titular diva, along with Lake Bell as Poison Ivy, Alan Tudyk as The Joker, Ron Funches as King Shark, Wayne Knight as The Penguin, Jason Alexander as Sy Borgman, and Christopher Meloni as Commissioner Gordon. (Syfy)

Dwayne Johnson and Issa Rae are teaming up as executive producers of an HBO drama called Tre Cnt (which stands for Tre Count), about a family who pools their money, experience, and dreams to try to build a backyard wresting empire. (THR)

The Last Dance, ESPN’s 10-part docuseries, left no doubt about how much sports fans are fiending for new content. The first two episodes of the series, which debuted last Sunday, drew 6.1 million viewers, the most ever for documentary content on the network.

Connie Britton is developing a series based on Rebecca Traister’s bestselling book All the Single Ladies: Unmarried Women and the Rise of an Independent Nation, about the history of unmarried women throughout the history of the United States. Britton will act as executive producer and appear in the HBO Max docuseries, which specifically traces the history of married and single women, and illustrate how single women rejected traditional paths and created opportunity for all women in the process. (THR)

Chip and Joanna Gaines are delaying the launch of their lifestyle network, Magnolia, because of the pandemic, so they’re airing a four-hour preview of what’s to come on the channel when it eventually debuts later this year. Magnolia Presents: A Look Back & A Look Ahead airs in April 26 at 5 p.m. ET on the DIY Network.

ABC will air The Story of Soaps, a two-hour special on the history of soap operas, on May 19. The show will explore “how no genre of television has laid deeper roots into our cultural consciousness and serialized storytelling than the soap opera,” and feature clips and interviews with daytime soap alums, including Bryan Cranston, Alec Baldwin, Jon Hamm, Susan Lucci, Deidre Hall, and Genie Francis, as well as famous soap fans Carol Burnett and Andy Cohen, and creator Agnes Nixon.

Netflix will produce a new Korean original series called Hellbound, about supernatural beings who “appear out of nowhere to condemn people to hell.” The series, based on an animated web series, will be directed by Train to Busan director Yeon Sang-ho.

YouTube will launch Celebrity Substitute, a series in which famous types will teach lessons in coding, biology, and other subjects during this era of peak distance learning. Karlie Kloss will help students work through a coding problem, actor and doctor Ken Jeong will teach a biology lesson, and Terry Crews, Bill Nye, Janelle Monáe, Camila Mendes will also be among the instructors. (THR)