Never Have I Ever: A Love Triangle Tests 'Hot Mess' Devi in Season 2

The cast of Netflix's hit teen comedy give us the scoop on the Paxton/Devi/Ben situation.

Never Have I Ever introduced us to another one during its debut season last year, so it’s not spoiling anything to tell you that the Paxton/Devi/Ben trio opens the Netflix dramedy’s second season, which has just launched on Netflix.

But it would be a spilling a major spot of scoop to tell you just how out of control the love triangle action spirals in just the first two episodes, the many twists the teen romances take, and where all the players stand at the end of the season. What we will say: Devi is most definitely, officially with one of her equally delicious (hey, that’s what makes it so fun to watch!) love interests by the time the credits roll on the season 2 finale. But … 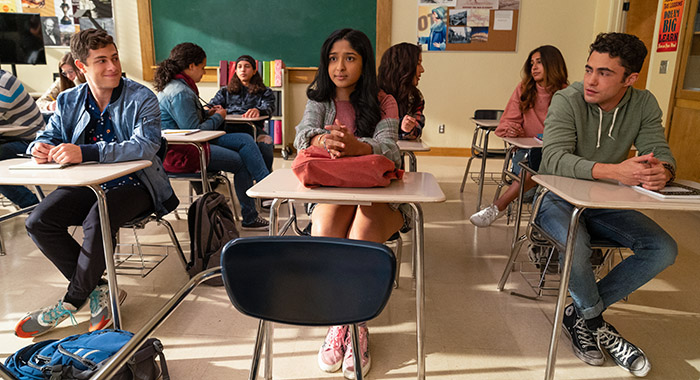 (Photo by Isabella B. Vosmikova/Netflix)

“The love triangle is yet to be sealed,” Paxton portrayer Darren Barnet (which is in no way a hint as to who Devi chooses, or who chooses her, at season’s end) told Rotten Tomatoes. “As much as (everything) in season 2 is answering it, you don’t know what is going to happen. This is high school, folks. People change their minds and get crazy every single day, so we’ve gotta wait and see.”

OK, so you might have guessed that would be the case. And though the series has not yet been renewed for a third season, its massive success with season 1 during the pandemic (40 million households, internationally, watched the season) and the anticipation for its sophomore season return would make a lack of renewal shocking. Almost as shocking as what Devi (star Maitreyi Ramakrishnan) does when she becomes jealous of the new girl and … 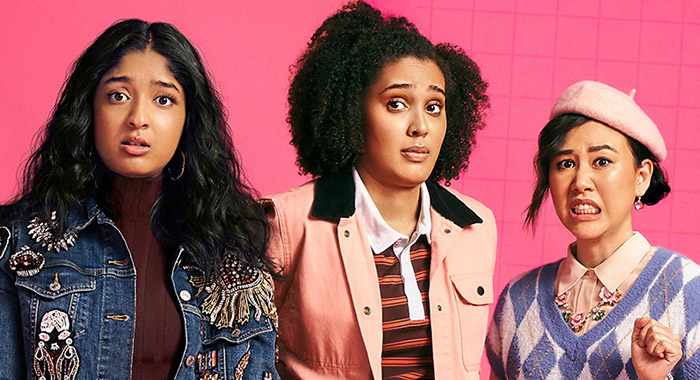 Nope, not spoiling it. Suffice it to say that season 2 is such a winner because the writers, including series creator Mindy Kaling, introduced us to all these endearing characters in season 1, and they continue to allow their talented cast to flesh them out in ways both big and subtle, and in ways that allow them to grow, and remain endearing, in the new episodes.

“Who is this guy? Is he someone who really genuinely does care, or is he someone who just has these little moments, but most of the time he’s a name-dropper, a bit overconfident, and rich and all that kind of stuff?” Ben portrayer Jaren Lewison said he wondered about his character. “I think season 2 does a really great job of showing that he does really genuine care, but he still is that person … he still is Ben Gross, he still likes to talk a lot about what his father does and his clients and some of his money. Sometimes you just shake your head and wanna say, ‘Ben why would you say that right now?’ But I think that’s part of what’s endearing about him … he’s a goofball who really cares, and sometimes he just says the wrong stuff.” 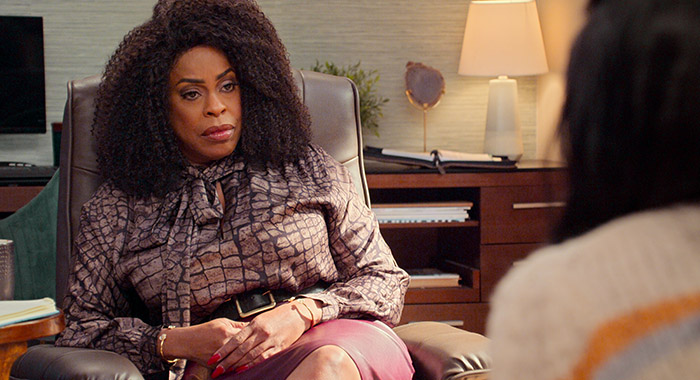 Devi, and again, not a spoiler, undergoes the most growth, as the center of the love triangle and the entire series, but not without a lot of drama throughout the season. There’s tension with Aneesa (Megan Suri), the new girl at Sherman Oaks, Mrs. Vishwakumar’s (Poorna Jagannathan) plan to move Devi to India, and a falling out with her friend Eleanor (Ramona Young). And as therapist Dr. Ryan (Niecy Nash) points out to her, Devi is still mourning the death of her father, which is manifesting itself in ways that continue to unmoor her.

“In the words of (Devi’s friend) Fabiola (Lee Rodriguez), Devi’s sort of always fighting with someone,” Ramakrishnan said. “I will say,  it is very fun to play a hot mess, but it requires a lot of figuring out why she’s being a hot mess. Like, even though Devi is doing some crazy lashing out, she’s doing that because there’s something else going on. Not to excuse her crap, but (it’s about), ‘Why do you think this is reasonable?’ And then understanding that why, because I have to make it convincing for the audience.”

All of Devi’s pals are also going through teen trials, from Eleanor’s own love triangle to Fab feeling pressure to change to fit in with her girlfriend Eve and Eve’s friends. And Aneesa, well, that’s a spoiler, but there is a reason she left her private school to transfer to Sherman Oaks. 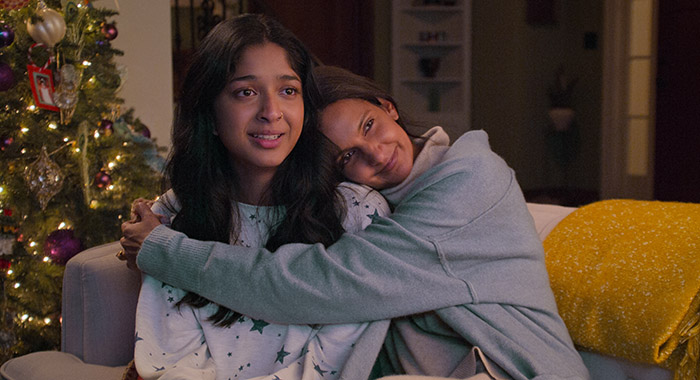 Inside Casa Vishwakumar, Devi’s cousin Kamala (Richa Moorjani) is working with a shady colleague who won’t give her respect or credit for an important medical discovery she makes, while Devi’s mom, Nalini, butts heads with a very handsome fellow doctor, played by Common, and sparks fly. But Nalini, too, is still dealing with the loss of her husband, Mohan (Sendhil Ramamurthy).

“Season 2 is such a huge lesson about grief, and that moving forward is just not the same thing as moving on,” Jagannathan said.

The bottom line on season 2 is that there is plenty of drama and comedy to send you breezing through 10 episodes (including one, episode three, devoted to Paxton and his backstory). And it’s going to have you hankering for another dose of Devi and the gang ASAP. 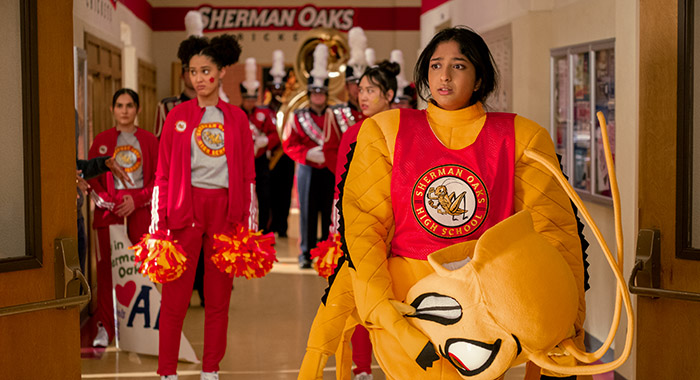 (Photo by Isabella B. Vosmikova/Netflix)

“The writers are geniuses,” said Ramakrishnan, who still can’t wrap her head around the fact that the series’ fans are so enamored of her character that they create Devi fanfic. “I don’t know how they come up with this stuff. Like, I had no idea at the end of season 1 that I would be in a cricket mascot suit,  sweating my butt off dancing. But here we are, and I love that, I’m proud of it.

“(And) I’m really excited to just see what shenanigans the writers get Devi and the rest of the gang up to. I want to see Devi continue to grow. She started standing up for herself at the end of (season 2) with Paxton … in a way she wouldn’t have in season 1 or most of season 2. That was true growth. So I want to see more of that.”

No surprise, so do we.

Never Have I Ever season 2 is now streaming on Netflix.