Bruno used the "M" word, Zoe takes on a surprising role, and that cameo! There's plenty to look forward to in season 2 and 2023 feature film The Marvels.

Ms. Marvel’s finale debuted Wednesday and wrapped up — at least in the immediate sense — Kamala’s (Iman Vellani) origin. Well, provided you consider a comic book origin story a thing purely revolving around their powers, costume, and name. But thanks to its other ambitions, like focusing on the Partition and suggesting her powers come from anywhere but her comic book counterpart’s Inhuman status, many questions and ideas remain for a follow-up season in the long term and Kamala’s upcoming return in The Marvels. So let’s take a look at the finale (and the last few episodes) to key in on some of the things Ms. Marvel might get up to in the near and far future.

Spoiler alert: The following discusses plot points of the finale of Ms. Marvel season 1. If you haven’t watched the episode and want to avoid spoilers, stop reading here. 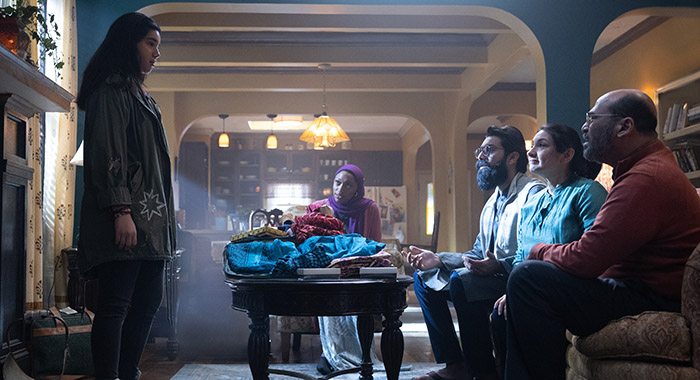 Although origins generally stick to the power-costume-name dynamic, Ms. Marvel was ultimately about a different sort of origin in its first season: how the hero’s family comes to embrace what they do. So often, the family is set up in opposition to the hero’s need to help others — the problem we thought would emerge with Muneeba (Zenobia Shroff) back in the first episode. See also Aamir’s (Saagar Shaikh) helicoptering in subsequent episodes and Yusuf’s (Mohan Kapur) inability to notice his daughter’s adoration of Captain Marvel (Brie Larson).

With all that in mind, we’re glad the revelation of Kamala’s secret is not only spoiled by the time she gets up the courage to reveal it, but it is welcomed in a way so specific to the Khans. Yusuf’s pride, Muneeba’s complete acceptance of it from the jump back in Karachi, and the way Aamir and Tyesha (Travina Springer) learn about it all speak to such a wonderful specificity for the family as characters and a welcome change in how excited they are to have a superhero in their midst. Sure, Yusuf still cautions her about the dangers, but it still feels like a big shift from the protectiveness we saw in earlier episodes.

Then again, as Muneeba herself said in episode 5, it may just be a function of them wanting to hold onto Kamala as long as possible — a parental or familial impulse not without merit.

On the other hand, all of Muneeba’s potential antagonism paid off as she ultimately completed Kamala’s costume. How she got a hold of that advanced Marvel uniform fabric, though, is something we need to see explored someday. 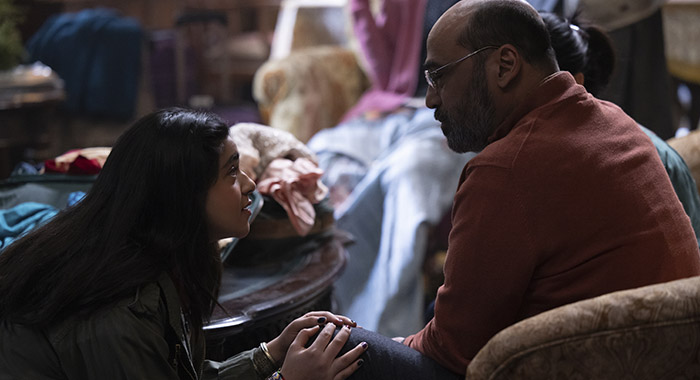 Similarly, we’re glad Kamala’s hero name comes about via a discussion with Yusuf. As we said back in the first week, the pain on his face when Kamala rejected the Hulk costumes was one of the most emotional moments in the early episodes and this feels, in some way, the reconciliation we needed between them. In terms of that family-oriented origin story, it’s great that both her parents contributed some element of hero identity, which itself relates back to the way he regards her as “Marvel” even before the powers.

And in terms of the overarching Marvel saga, it was probably best to focus on the Khans now. There may not be as much time for them in Kamala’s future appearances. We could easily see a second season focusing more on other elements even if the family proved to be one of the show’s great strengths. 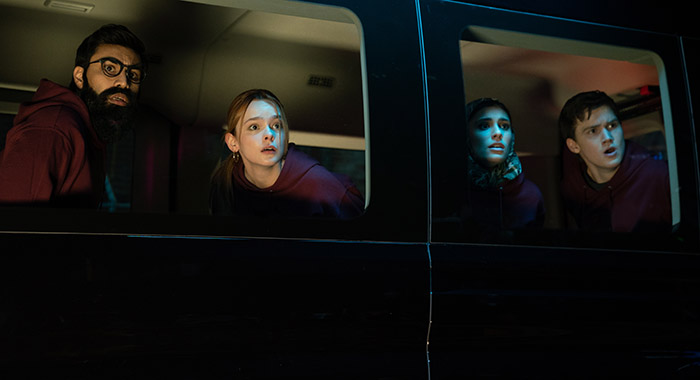 One of those other focuses in a potential second season could be Kamala’s friend group. They ultimately took a back seat with things like Zoe’s (Laurel Marsden) transition from mean girl to ally happening entirely off-screen. The character also pivoted in the comics, ultimately become very important to one of Kamala’s other friends, and we’d like to see that explored with the time and care afforded to the Khans and their history in this season.

Other things we’d love to see get more time include Nakia’s (Yasmeen Fletcher) role at the mosque — something teased in the closing montage — and Bruno (Matt Lintz) embracing the fact he may never see his feelings for Kamala returned. Also, for something less dramatic, we need to see the group just hanging out more often. The first season had almost no time for it, but the backyard party and the discussion about Kamran’s (Rish Shah) car in the finale indicate just how appealing the trio are when they have a moment to breathe and have fun. The Marvel format still moves a little too fast for it, but a second season may find a way to incorporate the kids just being kids. In fact, considering how long it might be before another set of episodes can be produced, those moments could be framed as their last before they all graduate.

Deever As the Real Threat 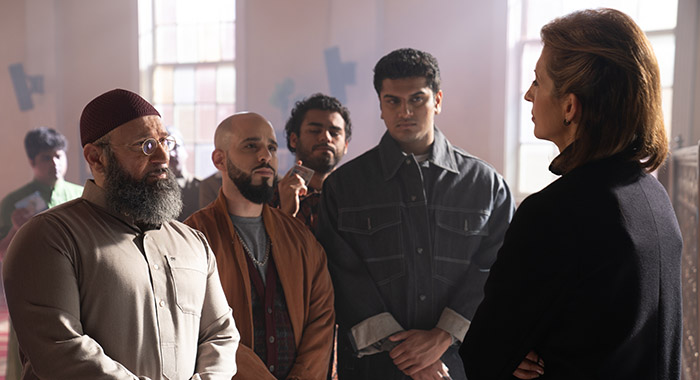 Despite setting up the Department of Damage Control and the Clandestines as bigger-tier adversaries in Kamala’s life, the finale seemed to offer that role to one person: Agent Deever (Alysia Reiner, pictured above right). She goes against Agent Cleary’s (Arian Moayed) orders, acts like an absolutely jerk to Sheikh Abdullah (Laith Nakli, pictured above left) when they raid the mosque, and refuses to accept just how bad it is to attack a high school. In retrospect, nearly all of Damage Control’s overreach centered on her, and we can’t help but think something personal is involved. Cleary might have relieved her of duty in the end, but that may just free her up for something more targeted in the future. And considering what might be in Kamala’s genes, we can think of a few people (and organizations) willing to recruit an ex-government agent to their cause.

But before we go too deep into what Bruno thinks he discovered about Kamala, let’s look at some of the other antagonistic forces circling Jersey City. The Clandestines plot was seemingly abandoned with Najma (Nimra Bucha) sacrificing her life to save Kamran. But then we heard her voice at one point during one of Kamran’s explosions of power. Did transferring the Noor power to him also send some of her consciousness his way? At one point, it seemed as though he might run off to break bad himself — something that could still happen despite finding sanctuary with the Red Daggers — but will it ultimately be his choice to adopt the villain role?

Also, although Najma closed the veil, there may yet be more to the Noor Dimension. Now that the veil has been opened (if only for a brief moment), will someone emerge to investigate the disturbance? 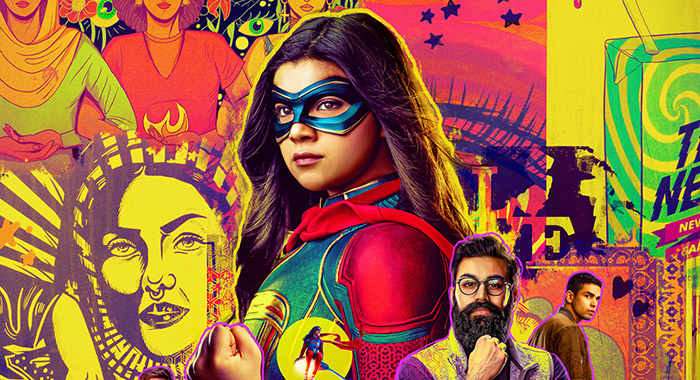 Thanks to Marvel Studios complicated relationship with the concept of Inhumans, the true nature of Kamala’s powers was also a key part of the first season. The bangle is only amplifying what was already innate in her. Initially explained away with a djinn origin some found a little too pat and stereotypical, it shifted to a Clan Destine possibility (although we’re still unsure the show meant to use much of that fairly obscure Marvel Comics series), to the notion of the Noor energy. But then, in the last possible moment, Bruno invoked a word Marvel fans have been waiting to hear in the MCU for at least a decade: mutation.

Should Kamala turn out to be a Mutant, it closes a loop in the story of Mutants and Inhumans outside the MCU or Marvel Comics universe. Kamala was originally created at a time when Marvel Entertainment wanted the Inhumans to replace Mutants and the X-Men in the popular consciousness (as the movie rights to Mutants were controlled by 20th Century Fox), an idea which never found much ground with Marvel Studios. But back in the comics, Kamala turned out to be the breakout character of the initiative and helped bolster the Inhumans as a concept. Making her a Mutant in the MCU tips a hat to all that messy intercompany history while also utilizing her as the new face of Mutantkind for a whole new generation.

And considering just how forcefully Deever went after her, the X-Men’s notion of protecting a world that fears and hates them is pretty palpable in the whole of Ms. Marvel’s first season.

That said, it is worth noting that Bruno’s exact phrasing is “mutation” and not Mutant. The tease could lead back to the Inhumans in the end even as it seemingly offers the first clue to an eventual MCU X-team. If reports are correct about Namor’s debut in Black Panther: Wakanda Forever, though, we may get more confirmation about Mutants in the near future; the Sub-Mariner was retconned into the first Mutant back in 1964.

The Other Bangle and the Appearance of Carol Danvers 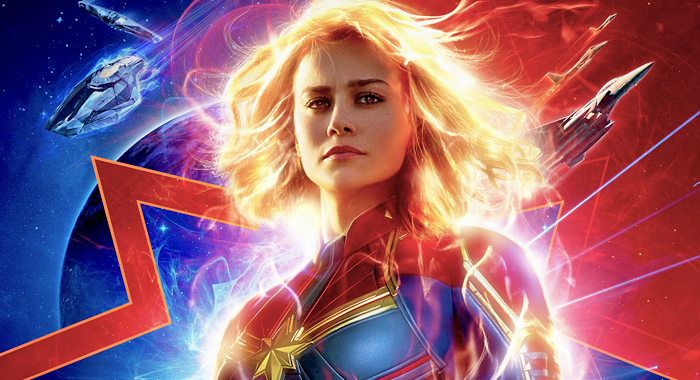 One thing we were absolutely surprised to find absent from the show was the other bangle. According to Najma and Aisha (Mehwish Hayat), both would be required to safely pass through the veil, yet no attempt was made by Kamala or the Clandestines to find it. Granted, the latter group probably spent the last century trying to locate it, but it is never a concern of Kamala. But with it still unaccounted for, we think the other bangle will come into play at some point.

That brings us to the mid-credit stinger scene: Kamala’s bangle springing to life and transposing her with Carol Danvers. The scene is a little more obscure than we expected — we always thought the two would actually meet in the end — but it offers a possible location of the second bangle: somewhere in deep space.

Recall that Aisha pulled Kamala’s eventual bangle from the arm of a dead Kree (or at least someone with blue skin). Carol, once a Kree agent herself, spends a lot of time on the edge of Kreespace and may have encountered it just before she switched places with Kamala. If that proves to be true, Kamala’s first trip to space will be both sudden and unwanted. Although, we imagine she’ll still have a few seconds to geek out once she realizes where she is.

We’re presuming, of course, that Carol truly appeared in that last scene. Another possible explanation for it comes direct from Kamala’s early days in the pages of Ms. Marvel comics. When she first received her powers, something more akin to shape-shifting than the energy manipulation of the show, she literally changed into the appearance of Captain Marvel — or to be more precise, Carol in her later Ms. Marvel costume. It is possible the bangle is enabling a similar shape-shifting ability and considering “Carol’s” only utterance in the scene is “No, no, no,” it could still be Kamala rushing off camera in that last moment. If that’s the case, it still leaves one to wonder if it happened because Carol found the other bangle somewhere out in the universe.

At least the answer to this particular pondering is just a year away. Kamala’s return in The Marvels is set for July 28, 2023.