Supernatural academies, murder mysteries, monsters, and bizarre love triangles — if you love those elements of Netflix's Addams Family sequel series, you'll find your next binge on this list.

Wednesday, Netflix’s extremely popular Addams Family spinoff series, stars Jenna Ortega as the titular character and explores her disgruntled journey as a new student at supernatural boarding school Nevermore Academy. Classmate conflicts, a growing psychic power, and an otherworldly murder mystery are just a few of the challenges she must grapple with in this new environment. 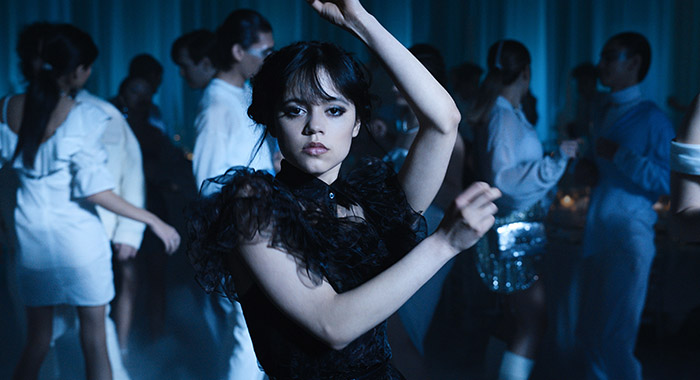 Since premiering on November 23, the series shattered streaming records in its first week with 341.2 million views. Thanks to Burton’s signature stylistic mix of gloom and glee, along with the performance of Ortega in the iconic role, Netflix had a guaranteed hit on its hands.

So, while we wait for a new season to hit the streamer, we’ve compiled a list of 10 shows and movies like Wednesday or otherwise related to the show that will surely tide you over.

As the lyrics state, “They’re creepy and they’re kooky, mysterious and spooky.” Yes, the Addams Family TV series (which ran from 1964 to 1966 and starred John Astin, Carolyn Jones, and Lisa Loring, among others) is a must-watch for any fans of Wednesday. The original sitcom enshrined this quirky family unit in pop culture. Sure, it may be dated in its comedy and storylines, but comparing this program to that of a modern depiction of Wednesday Addams is a fun way to see how far these characters have come.

Where to watch both seasons: for free on Pluto TV or Tubi or buy it at Vudu, Apple TV, Prime Video, Google Play

The Addams Family movies of the early 1990s succeeded at bringing the spooky, kooky, and offbeat crew to the big screen. Not only did Raul Julia and Anjelica Huston bring chemistry and romance to the roles of Morticia and Gomez Addams, both installments (each directed by Barry Sonnenfeld) captured the comedic tone of the comics and original series, while adding a welcome element of dark humor to the mix. It’s here that a young Christina Ricci originated the deadpan panache that would become a trademark of the character Wednesday Addams.

Chilling Adventures of Sabrina follows half-witch and half-human teenager Sabrina (Kiernan Shipka) as she navigates that duality while fighting the sinister threats to her, her friends, and her family. Like Wednesday, who attends the Nevermore Academy, Sabrina is a student at the Academy of Unseen Arts. The similarities continue beyond the supernatural schooling and macabre production value of each series; both characters work to solve murder mysteries while butting heads with authority figures and other classmates. Oh, and there’s a pesky love triangle in each, as well.

Where to watch all four seasons: by subscription on Netflix or buy them on Vudu, Prime Video, or Apple TV

Supernatural began as a monster-of-the-week series that followed hunter brothers Sam (Jared Padalecki) and Dean Winchester (Jensen Ackles) as they strived to save people by taking out demons, vampires, werewolves, and other such sinister creatures. The universe expanded with each season, helping to evolve the program into a grandiose genre affair that lasted a whopping 15 seasons, making it the longest-running CW show ever. Sam and Dean’s adventures eventually came to an end, but thanks to the CW’s freshman spinoff The Winchesters, which explores the origin story of how the brothers’ hunter parents met, the Supernatural universe lives on.

If you’re looking for another program that takes place at a supernatural school, we suggest Legacies. The spin-off of The Vampire Diaries follows Hope Mikaelson, a half-vampire, half-werewolf, and half-witch, who enrolls at the Salvatore School for the Young and Gifted, a boarding school for beastly teens. Considering the aesthetic and storylines of the original series it’s spawned from, prepare yourself for loads of conflict, drama, and genre indulgence.

Where to watch all four season: by subscription on Netflix or buy them on Vudu, Prime Video, Apple TV, or Google Play

Without Buffy the Vampire Slayer, it’s tough to imagine a supernatural teen drama centered around a snarky young heroine who fights monsters. Sarah Michelle Gellar’s take on the titular vampire slayer finds the humanity amid the chaos as the series focuses on a high school girl just trying to live a normal high school life. Thanks to the humorous character dynamics and smart writing, Buffy is a genre series that was ahead of its time.

Where to watch all seven seasons: by subscription on Hulu or buy them on Vudu, Prime Video, Apple TV, Google Play

Before Wednesday Addams took up the amateur-sleuth mantle in Wednesday, Lucifer Morningstar (Tom Ellis) did it to varying degrees of success in Lucifer. In a crime procedural with a twist, Lucifer, the Lord of Hell, finds himself retiring from his boring station in the afterlife to moonlight on Earth as a consultant for the Los Angeles Police Department. As it happens, Wednesday star Gwendoline Christie plays a second, and quite different, representation of the Lucifer Morningstar character in Netflix’s The Sandman series. Both are iterations of the DC Comics character created by Neil Gaiman, Sam Kieth, and Mike Dringenberg.

Where to watch all six seasons: by subscription on Netflix or buy them on Vudu, Prime Video, Apple TV, or Google Play

96% A Series of Unfortunate Events

After the tragic deaths of their parents, the recently orphaned Baudelaire children – Violet (Malina Weissman), Klaus (Louis Hynes), and Sunny (Presley Smith) – set out to uncover the truth behind their demise. Things get complicated when unhinged con-man Count Olaf (Neil Patrick Harris) invade their lives to claim their massive fortune for himself. Based on Daniel Handler’s Lemony Snicket books, the Netflix series taps into the quirky gothic fairytale style that put Tim Burton on the map.

Where to watch all three seasons: by subscription on Netflix

This list started with the work of young Christina Ricci, whose most recent television project may also hold some appeal for Wednesday fans. Aesthetically, Yellowjackets doesn’t tread the same narrative or stylistic ground that Wednesday does, but the series, which follows members of a high school girls soccer team who become stranded after a plane crash, explores two timelines – and the conflict that plays out between the girls in the wilderness may appeal to fans of Netflix’s Addams Family sequel series. Not to mention, Ricci’s ruthless character Misty Quigley is extremely fun to watch.

Where to watch season 1: by subscription on Showtime or Paramount+, or buy it on Vudu, Prime Video, Apple TV, or Google Play

“If my family was a week, I’d be Wednesday,” Ortega says as Harley Diaz in the opening moments of Stuck in the Middle’s first episode. Talk about foreshadowing. Disney’s family comedy about a family of seven kids and the one stuck right in the middle lasted just three seasons, but helped introduce Ortega to television audiences. It’s a low-stakes fun watch and gives a peek at the star Ortega would become.

Where to watch seasons 1-3: by subscription on Disney+ or buy on Prime Video, Apple TV, or Google Play