More scarves, more stilettos, and more work and romantic struggles are in store this year. 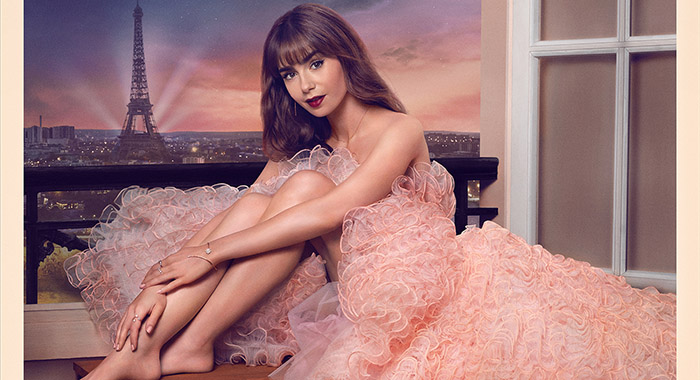 The third season of Emily in Paris, the sartorial delight of a rom-com, says bonjour to Netflix audiences on December 21.

The previous season’s finale left Lily Collins’ eponymous type-A Chicago marketing exec with not one, but two, life-altering decisions: Should she get serious with British financier Alfie (Lucien Laviscount) or pine for French chef Gabriel (Lucas Bravo) now that he’s back with his ex, Camille (Camille Razat)? And should she stay under the tutelage of her mentor Madeline (Kate Walsh), who sent her to Paris, or join the sophisticated sometimes boss-enemy (bossemy?) Sylvie (Philippine Leroy-Beaulieu)?

“Work is why Emily’s in Paris, and [we wanted to keep] the focus on that,” he told Rotten Tomatoes. He added that “work often gets in the way of her romantic relationships … I think the relationship aspect of her life comes as sort of always a bit of a surprise to her.”

She’ll also be out of the office and take in the sights. After all, what is a fun roommate like Ashley Park’s Mindy for if not for carnival bumper cars and pool parties? 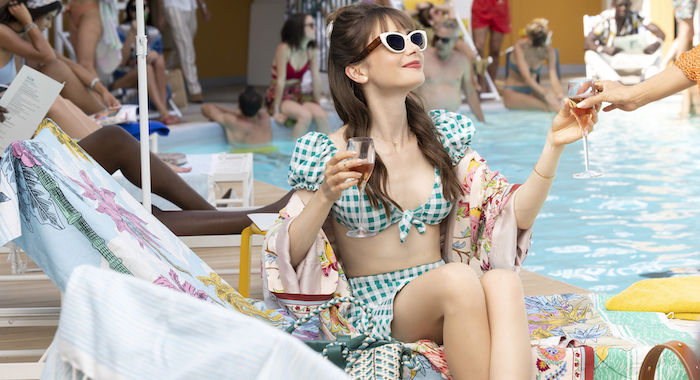 And she sings. Poorly. This is a choice since Collins can actually sing.

“What I loved about that scene is that, because she’s an incredible actress, it really allows her voice to be informed by what’s happening in the scene,” Park said and added that “you can feel what that character is feeling … she’s singing for a reason and with an intention and for somebody and that is the best kind of singer and artist.”

Emily and her friends and co-workers get up to much more this year in gay Paree. And, thanks to the help of costume designer Marylin Fitoussi and her team, they all do it while looking fabulous.

They Don’t Call It The City of Love for Nothing 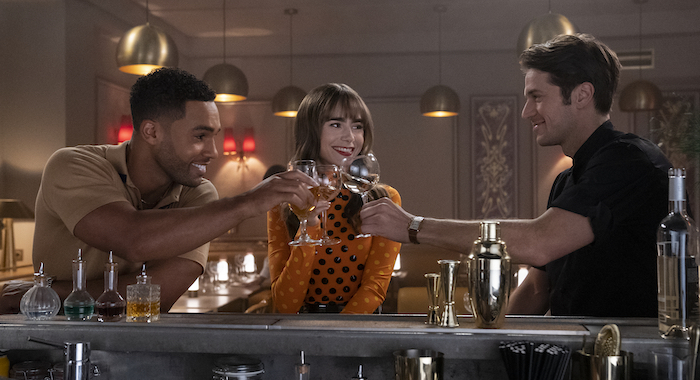 While work is very much at the forefront of this story, Collins’ Emily and her friends do spend a good deal of time talking about dating and relationships — both Emily’s and theirs.

“Season 1, I was asked [if Emily were] more of a workaholic or romantic, and I feel like that question just so much defines what we’re used to in the romantic comedy world,” Collins said. “This show is so much about women in the workplace as much as it is about romance. And I think it’s really important to continue that storyline of feeling torn within your job and how much it means to you.”

But, with Laviscount’s Alfie and Bravo’s Gabriel still very much in the picture, this season allows for plenty of awkward exchanges and looks while also exploring backstories for both of these men — who, for the record, are just as devoted to their jobs as Emily is to hers. 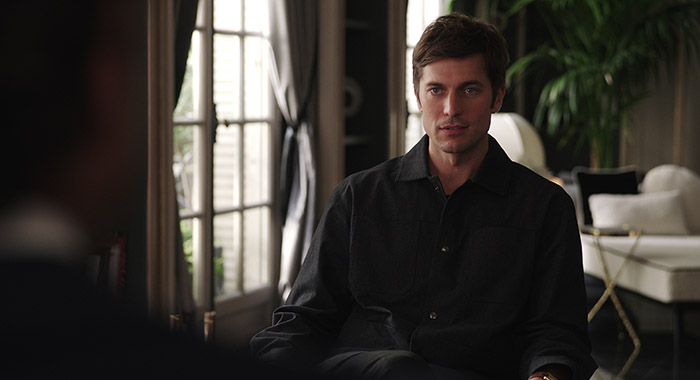 This year, Gabriel’s restaurant will flourish as he thinks about what kind of a future he wants while keeping a profession that has notoriously long (and late-night) hours that conflict with Camille’s job at an art gallery.

“With any character, you want to evolve and you want to see more and you want to be challenged as well,” Bravo said. “It wasn’t so much about his love life anymore. It was mostly about making strong choices and becoming the man he wants to be. Because, in the previous season, he didn’t really own up to a few choices he made or mistakes he made. It felt great to see him evolve.”

Meanwhile, long-distance relationships are rarely ideal and Alfie and Emily have to find a way to stay together while still staying employed.

“Season 3, for me, it delves into everyone’s who-they-are a little bit,” Laviscount said. “As much as it is Emily in Paris, it’s also these amazing characters that she’s found herself living this life with who have so many more things going on.” 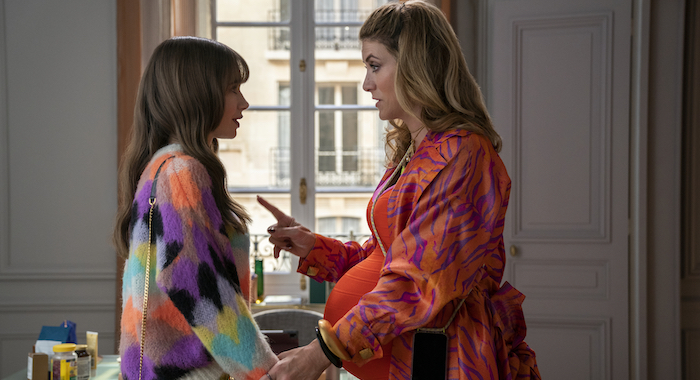 Much of the season deals with the fallout from the decision by Leroy-Beaulieu’s Sylvie to leave the marketing company she started and is now owned by Emily’s Chicago-based firm. There’s a spot for Emily, if she wants it, but that would mean she’d have to “break up” with her mentor, Walsh’s (very pregnant) Madeline.

“Emily wants to be there for both women,” Collins said. “It’s not that she wants one over the other; she really feels like she can give something of herself to both. The value she places in her work and her passion and her love for it is unapologetic.”

But while Emily is good at helping clients make decision, she’s not so good at making them herself.

“I think of Emily as a character that’s indecisive in all areas,” Walsh said. She added that, for her and Leroy-Beaulieu, “It’s just a really fun tug-of-war that we get to play and it was great. We both felt like the writers were having a great time writing this arc; this little piece of the show [that’s] between Madeline and Sylvie vying for Emily.” 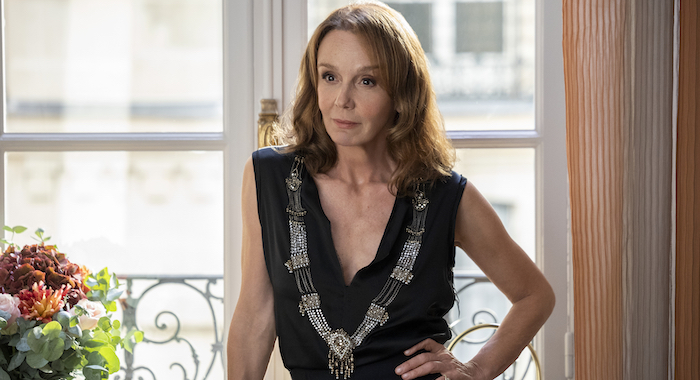 Sylvie has always played it cool with Emily (and most everyone else). But Leroy-Beaulieu said that it was fun to play a version of her that we haven’t seen.

“When she realizes she’s been two-timed by Emily it’s like, ‘You betrayed me,'” Leroy-Beaulieu explained. “I like the idea that both of them feel so betrayed.”

Not that Emily is always on Sylvie’s mind. She was never one to have a dull dating life and this season is no different.

“It gives us some kind of density to see that she goes toward [spoiler],” Leroy-Beaulieu teased. “She suddenly has somebody who really has some sort of — I don’t want to say ‘values’ in the boring sense, but in the nice sense. I love that, and I think she should stay with that person. But Darren doesn’t make it easy for us.”

Leroy-Beaulieu also got a chance to show off her dance moves when Sylvie dances a tango under the Parisian moonlight. She does this, of course, wearing Sylvie’s trademark pencil-thin heels.

“It was my last day of shooting too,” the actress said. “It was so nice to end on that scene because it’s Sylvie’s cliffhanger.” 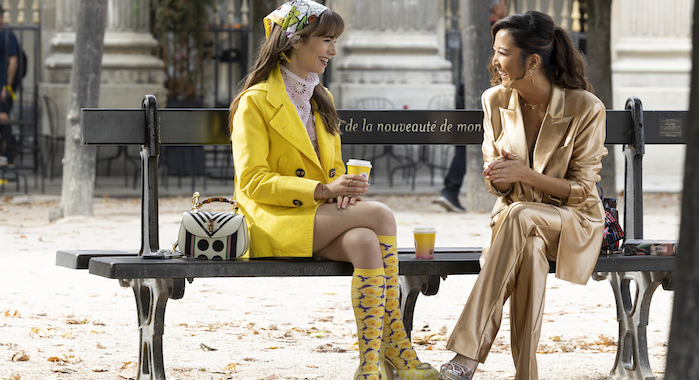 Emily’s work friends and off-hours friends also get more to do this season and don’t just operate in Emily’s orbit.

“What we were really excited about this season was, often female friendships get the stigma of if there’s any sort of ‘challenging each other,’ then that doesn’t come across as the most supportive,” Park said. “I think that what’s really interesting is, with all of these female friendships, you get to see all these different dimensions’ you get to see these nuances. And I think that was really unique to this season, especially for Mindy and Emily.” 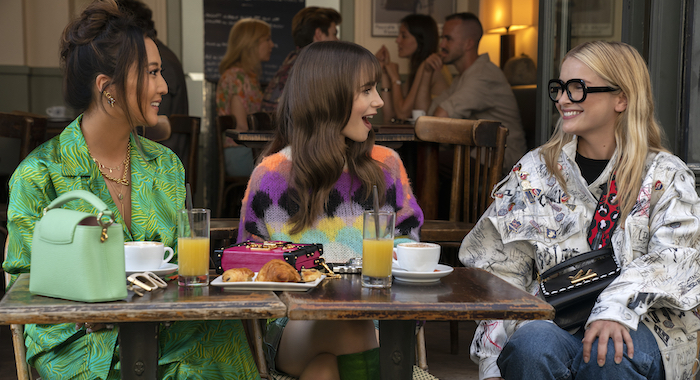 Park’s Mindy continues to try to make it on her own as a singer without relying on the financial support and connections of her wealthy parents, while Emily and Camille have to decide how their friendship will work now that she moved in with Gabriel (who happens to be Emily’s downstairs neighbor). 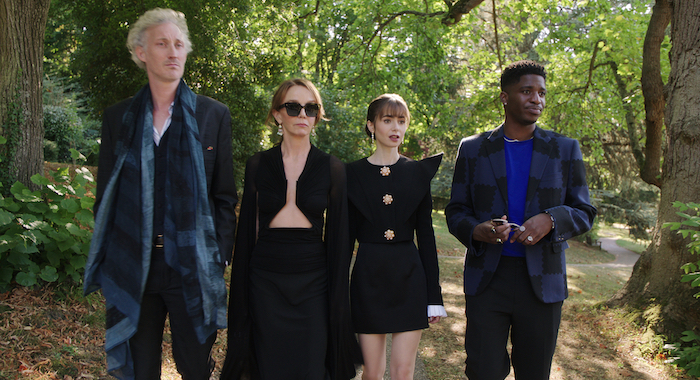 This isn’t to say that everyone is in favor with Emily’s seemingly Don Draper–like ability to pitch and pivot to brilliant ideas on the spot.

“Emily means well, but she’s not really being a team player,” said Samuel Arnold, who plays Emily’s increasingly frustrated coworker Julien, a forward-thinker who does not enjoy being side-lined. “I feel like Julien just speaks up for himself. He’s trying to find his place in his own company where he was before she even got to Paris in the first place.”

“He’s such a great character,” Star said. “I think we have so many wonderful characters that populate the show. I feel like any reason to bring Jeremy O. Harris back, we’re going to find it.” 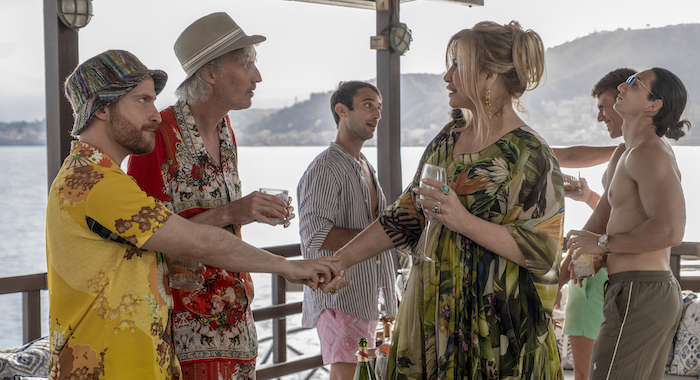 Fans of Emily in Paris who enjoy other stories of well-dressed Americans discovering other places might have also noticed that Bruno Gouery, who plays Emily’s quirky and curly-haired coworker Luc, was also in the second season of The White Lotus.

This interview took place before that show’s season finale, but Gouery said he got the part of the somewhat eccentric Didier — a friend of Tom Hollander’s slick heir Quentin — through an audition.

“I got the role, and after [creator] Mike White said to me, ‘Bruno, when I choose you, I thought I discovered an unknown [actor],'” Gouery laughed. “He said to the hair and makeup teams — all the staff — ‘Look at that guy I found,’ and everybody said, ‘Oh, it’s Luc, the guy from Emily in Paris.'”