Critics say Pixar's Toy Story-adjacent space romp is gorgeous and fun, even if it doesn't reach the studio's greatest heights, and a scene-stealing Sox the cat will be everyone's new favorite sidekick.

Pixar returns to theaters with Lightyear, a sort of spin-off of their Toy Story franchise featuring the in-universe inspiration for the Buzz Lightyear toy (voiced here by Chris Evans). The first reviews of the movie celebrate its animated sci-fi action and adventure story and visuals, as well as its scene-stealing robot cat for comic relief, but it’s not necessarily the studio’s greatest release.

Here’s what critics are saying about Lightyear:

Does it live up to peak Pixar?

Lightyear is the best movie of the year so far, and the best Pixar movie in quite some time. – Tessa Smith, Mama’s Geeky

Lightyear emerges as a disappointing runner-up, capturing but a fraction of the comedy, thrills, and poignancy of its predecessors. – Alonso Duralde, The Wrap

Sadly it never reaches the emotional highs that Pixar was known for. – John Nguyen, Nerd Reactor

Not every Pixar production needs to be a new modern classic, but… Lightyear is not exactly going to occupy too much space in my mind in the weeks to come. – Aaron Neuwirth, We Live Entertainment 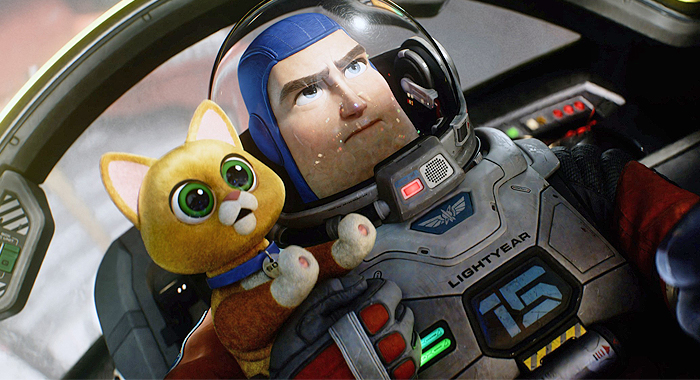 Will Toy Story fans love it?

The film captures the magic of what made the Toy Story franchise while confidently opening the door for new fans to the franchise. – David Gonzalez, Reel Talk Inc.

For old and new Toy Story and family adventure fans alike, this is worthwhile dream fulfillment and highly exciting entertainment. – Don Shanahan, Every Movie Has a Lesson

Angus MacLane’s animated space adventure is an absolute winner with thematic and emotional resonance, just like the Toy Story films before it. – Ryan McQuade, Awards Watch

This is a movie for Toy Story adults — the people who grew up on the movies and now hold jobs and mortgages — not Toy Story children. – Hoai-Tran Bui, Slashfilm

It won’t engage the heart or the head in the way that Toy Story films have led viewers to expect over the last quarter-century-plus. – Alonso Duralde, The Wrap

What ultimately waters down Lightyear… is an absence of the excitement and disciplined storytelling spirit that made Toy Story such a pioneering hit. – Tomris Laffly, AV Club

Angus MacLane and his co-writer Jason Headley craft a transportive and imaginative screenplay… The most impressive thing about the duo’s screenplay is added layers of freshness to an already beloved character. – David Gonzalez, Reel Talk Inc.

This feels like a story designed off a checklist rather than one told from the heart because it needs to be told. – Rob Hunter, Film School Rejects 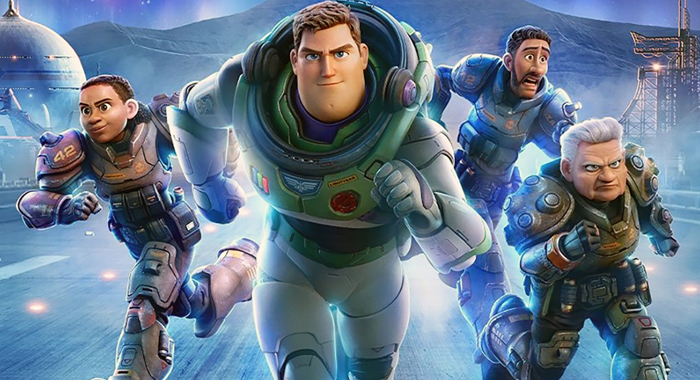 What about a strong message for the kids?

Lightyear will show you why Andy was enamored with his movie of choice and make you remember which one did that to you too back when you were a kid. – Don Shanahan, Every Movie Has a Lesson

Lightyear is a moving movie to see in our modern, cynical times when we can see people grow beyond what they are into the people we need them to be. – Ryan McQuade, Awards Watch

There is a lesbian kiss in Lightyear… This is a great way to have LGBTQ+ representation and inclusion on the screen, and should be applauded. – Tessa Smith, Mama’s Geeky

Does it play well as a sci-fi action movie?

Lightyear is still an extremely fun action sci-fi film that is better than most animated films released in a given year. – Ross Bonaime, Collider

Pixar has dabbled in the action genre with The Incredibles and doubles down here with visually impressive, grin-inducing shootouts and fights. – Jonathan Sim, ComingSoon.net

It works out well enough to be entertaining overall for people who enjoy animated films that take place in outer space. – Carla Hay, Culture Mix

The outer-space visuals and action-packed fight sequences are undoubtedly riveting. – Mike Massie, Gone With the Twins 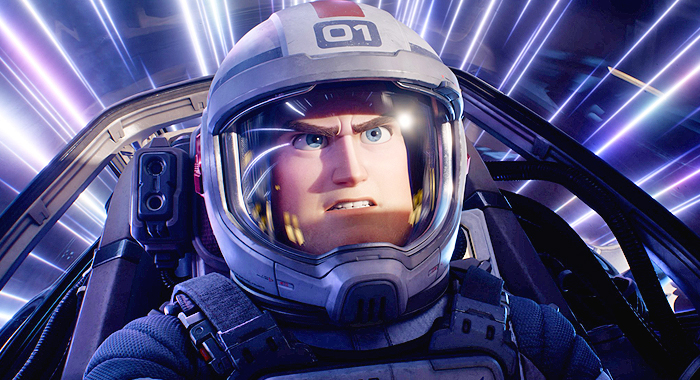 If it needs to be said, the film is a visual triumph, with stunningly photo-real images and richly detailed deep-space locations. – Scott Mendelson, Forbes

Lightyear is easily Pixar’s best-looking movie yet. It isn’t even a question. – Tessa Smith, Mama’s Geeky

One of the most aesthetically appealing features Pixar has done. The environments’ scale and scope are dazzling. Many gorgeous frames are pure art. – Courtney Howard, Fresh Fiction

With stunning space sequences, Lightyear adds to a genre rich in space beauty with one of the best-looking films of the year. – David Gonzalez, Reel Talk Inc.

Lightyear has visual pizzazz, from the hyperspace sequences to the heretofore hidden surprises that emerge from those colorful buttons and dials on the Space Ranger uniforms. – Alonso Duralde, The Wrap

The visuals are definitely up to Pixar standards, but the visual effects in Lightyear are not really game-changing or extraordinary. – Carla Hay, Culture Mix

How is Chris Evans as the new voice of Buzz?

While Evans’s version of Buzz is akin to Tim Allen’s interpretation, this version is given the space to mold something fresh. – Ryan McQuade, Awards Watch

Evans puts his stamp on the character and makes it relatively easy to forget about the re-voice casting and fall back into the world of Buzz. – David Gonzalez, Reel Talk Inc.

Evans also does a commendable job of taking on the iconic role of Buzz Lightyear, giving the character just the right amount of gravitas and heroism that he needs, but mixed with just a dash of ignorance and naivety. – Ross Bonaime, Collider

[He] does a creditable job… though a bit of that Allen snap gets lost. The character seems less funny, a notch more ordinary. – Owen Gleiberman, Variety 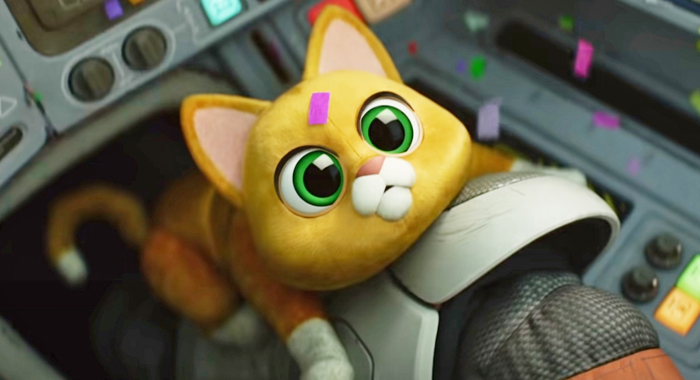 Will fans love the new characters too?

One of the movie’s greatest strengths is that it introduces characters with memorable personalities and quirks, with Sox being the one that viewers might be talking about the most. – Carla Hay, Culture Mix

One of the best character debuts in any Pixar film. – David Gonzalez, Reel Talk Inc.

[Sox the cat is] one of the best new characters in recent Pixar memory. – Ryan McQuade, Awards Watch

Despite feeling a bit derivative of Baymax in Big Hero 6, [Sox] the cat brings much-needed charm, heart and smile with his cute behavior, funny situations, and loyalty as a companion. – John Nguyen, Nerd Reactor

Izzy is an instant fan fav. She has the charm, the comedy, determination, overall countenance, natural hair, and all, of a character people can relate to. – Catalina Combs, Black Girl Nerds

This [movie] is packed to the gills with vibrant characters and creepy villains, most of which are sadly more interesting than Buzz himself. – Tomris Laffly, AV Club

Should they have just titled the movie “Sox the Cat“?

His presence alone makes this movie worth the price of admission. – Jeff Nelson, Showbiz Cheat Sheet

Suffice it to say, Sox would be the toy every kid would have wanted after this film, not a Buzz Lightyear. – Aaron Neuwirth, We Live Entertainment 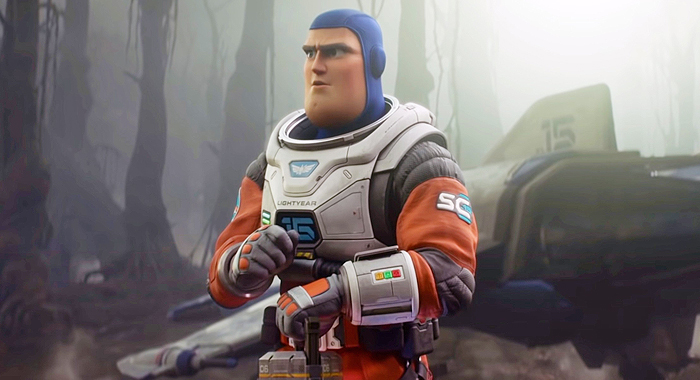 Is it a good sign for the future of Pixar?

If Luca, Turning Red, and Lightyear is the vision of Pixar going forward… then we are looking at a whole new renaissance by this prestigious animated institution. – Ryan McQuade, Awards Watch

If this is what Pixar can accomplish without really stretching its creative or emotional talents, just imagine what they could do if they gave it their all. – Rob Hunter, Film School Rejects