Demián Bichir and Madison Taylor Baez star in a TV adaptation of the novel. Andrew Hinderaker's series seeks to redefine what it means to "love" vampires.

The rules for what a vampire can and cannot do may fluctuate by project and lore, but the consistent message through almost all of these stories is that a vampire’s survival is dependent both upon easy access to blood and on humans who are so obsessed with them and that they will uproot their own lives to stay in their orbit.

And, from the new AMC series adaptation of Interview with the Vampire to the CW’s YA drama The Vampire Diaries, that obsession usually comes in the form of lust.

But what if it came out of love? Specifically: parents’ love and duties to protect their children. 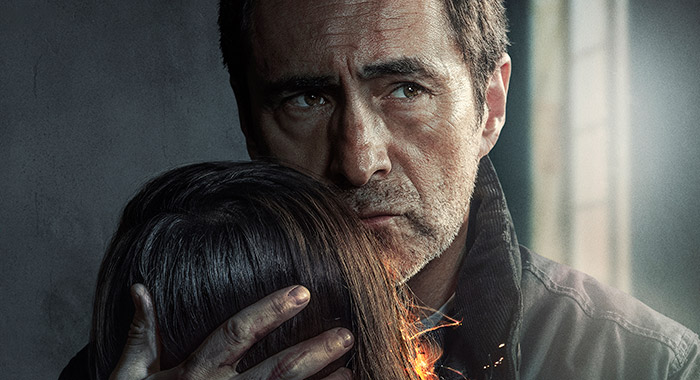 That’s the jumping-off point for Showtime’s Let the Right One In, a series adaptation of the John Ajvide Lindqvist horror novel of the same name (and one that should not be confused with either the Swedish movie adaptation of the book or the American one).

Instead of going with the premise that a vampire in the form of a child must find ways to make human after human into her personal gofers in order to maintain her immortality, this show concentrates on the relationship between Eleanor Kane (Madison Taylor Baez), a permanently 12-year-old girl, and her dad Mark (Demián Bichir). For the past decade, the two have traveled the globe in search of a cure for Eli’s particular infliction. Mark, who has given up sleep or really any kind of job or social life, spends his days hunting for clues on the internet or carting his child around in a giant travel chest and his nights murdering others to feed his kid and keep her from turning into a monster with no self control.

Series creator Andrew Hinderaker said that his writing method means finding the “emotional response” of characters, referencing a scene in the Swedish film where the child vampire (portrayed there by Lina Leandersson) feeds on a creature and then begins to cry because of the life she just took.

“It spoke to me, really profoundly, on a lot of levels and one of the reasons why is it felt like it was in conversation with addiction,” Hinderaker said, explaining that the audience is “looking at a creature who is essentially addicted to blood and whose addiction was destroying not only their life, but the lives of everyone who took care of them and was protecting them.”

Hinderaker is weary of any romanticization of vampirism, saying that this source material felt different from other stories because it “really asked these questions about what if you were you potentially could live eternally but you were stripped from the things that make us most human” and that he found “that so emotional and so profound, that I can’t help but wonder, well, if you don’t take those things seriously, then what is the story that you’re telling?” He also met with a virologist to discuss what, exactly, this unique liquid diet and a lack of sunlight would do to the human body.

Hinderaker said that whenever he feels “lost in the show,” he thinks back to a scene in the first episode where Mark tenderly takes Eli’s hand after something horrific happens. 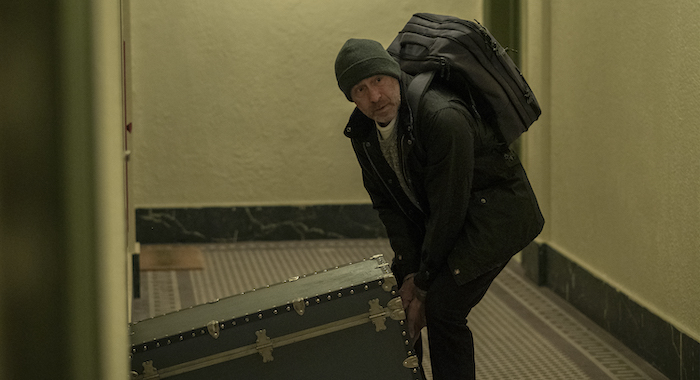 For Mark and Eli this also means a “Don’t Ask, Don’t Tell” policy when it comes to how and where he gets her dinner.

“We have that pact very clearly established,” Bichir said, explaining that Mark has told Eli, “You only worry about being safe and being away from the sun, and I’ll worry about everything else.”

“There are many different lines that you cross in order to provide your family with the best — or, at least, the essentials,” said Bichir, who is a parent. “And it is clear that my daughter will never cross those lines. I will cross them from her.” 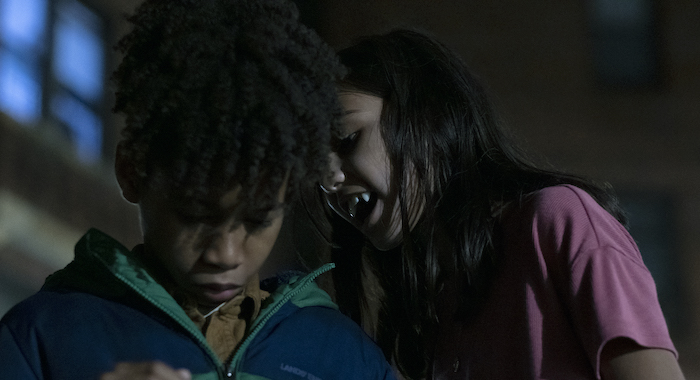 Baez also acknowledged that Eli’s experience these past 10 years isn’t that different from what actual children experienced during the COVID-19 lockdown.

“Not being able to have really any relationships except for her dad — I think that’s definitely one of the struggles. She can’t go to school; she can’t have any real friends,” Baez said.

This is one of the reasons Eli is so drawn to Isaiah (Ian Foreman), a boy her age who lives in her building and who loves magic tricks almost as much as he does his absentee father. He’s being bullied at school and his mom, Naomi (Anika Noni Rose) isn’t sure how to handle it — especially since she’s a NYPD homicide detective who is busy investigating a weird case where victims seem to be drained of their blood. 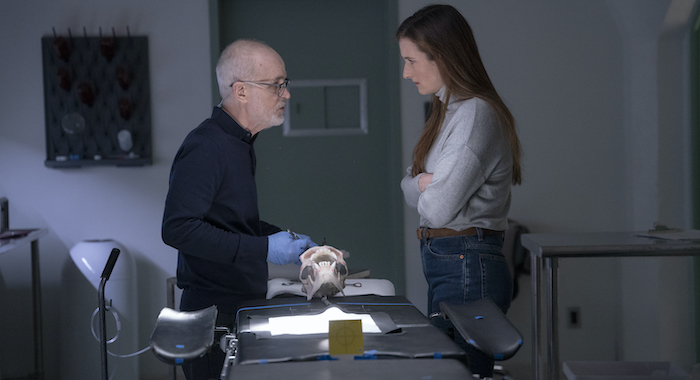 And Mark and Eli’s father-daughter relationship isn’t the only one of this kind in the show. A more fractured one is seen between Željko Ivanek’s terminally-ill pharmaceutical industry pioneer, Arthur, and his scientist daughter, Claire (Grace Gummer). Both seem to be searching for answers to the same question but their complicated history may be getting in the way.

Hinderaker knows that this all seems more convenient than coincidental but that his goal is to “start really intimate and small and let the stories emanate from there.”

“It’s really exciting because it just opens up an entire worlds where an emotional drama can meet a vampire show can meet a true-crime mystery, can meet the cutting-edge science [show],” he said. 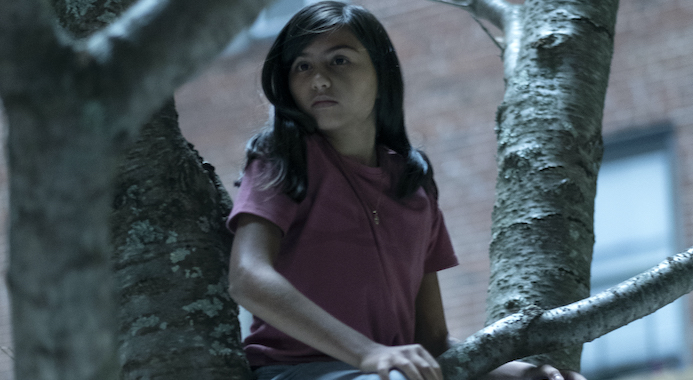 And this is certainly not the only vampire story that focuses on the rage of being a tween or teen girl coupled with her intense relationship with her biological or vampire father. (see also: Interview’s Claudia, Vampire Academy’s Rose and Lissa and True Blood’s Jessica). Is there just something more interesting about putting a young woman in this predicament?

Hinderaker laughs that he may be “dangerously dipping my toes into gender politics” by saying this but, “having been a tween boy, I do find as a writer that there’s more richness in Eleanor’s character than would be if tween Andrew was a vampire.”

“The metaphor is there for a reason in our show where Mark … is, in many ways, trying to get that 12-year-old girl back that he had 10 years ago and she is becoming something else,” Hinderaker said. “That is a journey that every parent is going to go through and that I think can be particularly complex for fathers and daughters.” 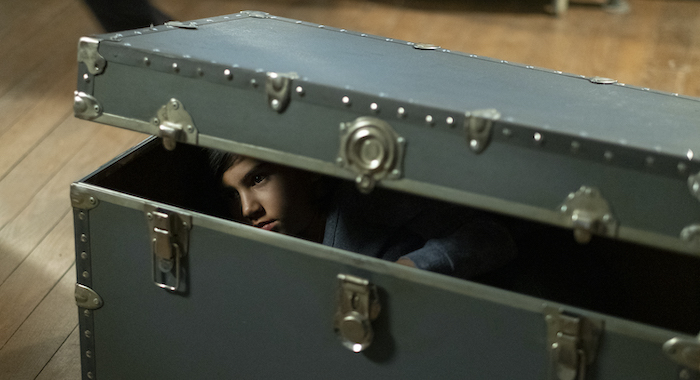 But Baez is not really a vampire, and she will age. So, how long can a show like this continue?

“It was always baked into a multi-season narrative and the [story] bible of our series that this story would go for several seasons, that we would have a child vampire at the core and it would be played by a child who would naturally age,” Hinderaker said. “And, so without spoiling any more, that was always accounted for in the mythology of the show.”

63% Let the Right One In: Season 1 (2022) premieres at 10 p.m. on Sunday, October 9 on Showtime after an early debut on Friday, October 7 on Showtime’s digital channels. The first episode is now available to watch for free online at sho.com.