Critics at the Venice Film Festival say this “genuinely scary” ode to 1960s London and Hammer horror carries all the director’s trademarks – cue the awesome needle drops – and provides the late Diana Rigg with a fitting swan song. 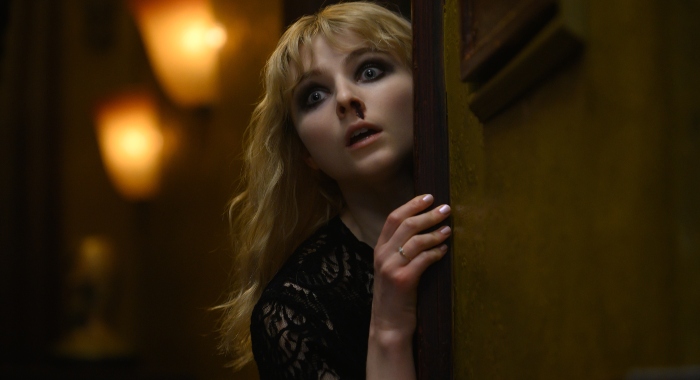 Edgar Wright, best known for hybrid comedies such as Shaun of the Dead and Hot Fuzz and the crime thriller Baby Driver, continues to play around with genres in Last Night in Soho, a nostalgic yet nightmarish tribute to 1960s London. The first reviews, from its Venice Film Festival debut, mostly celebrate its stylish time-traveling mashup of British cinema homage and unique spin on giallo horror – as well as its dual-lead performances from Thomasin McKenzie and Anya Taylor-Joy and loving showcase for screen icons such as the late Diana Rigg.

Here’s what critics are saying about Last Night in Soho:

Is Last Night in Soho as entertaining as it looks?

“Riotously entertaining…a blast. Last Night In Soho is the kind of good time which isn’t over until someone’s either crying or bleeding.” – Wendy Ide, Screen International

“Why the hell isn’t it more fun?” – Jessica Kiang, The Playlist

What kind of movie can we expect?

“An intoxicatingly distinctive, delirious creation that soars out of every pigeonhole you put it in…[it] twists and turns between being a perky sitcom about the hassles of student life to a rollicking time-travel romance to a full-on horror movie. And I do mean full-on.” – Nicholas Barber, IndieWire

“[It] delights in playing with genre, morphing from time-travel fantasy to dark fairy tale, from mystery to nightmarish horror in a climax that owes as much to ’60s Brit fright fare as to more contemporary mind-benders.” – David Rooney, Hollywood Reporter

“Another delightfully off-kilter thriller that also thrills with its undeniably trippy atmosphere…a more vibrant and exciting addition to the genre would be hard to find.” – Pete Hammond, Deadline Hollywood Daily

“Wright’s particular affections for B-movies, British Invasion pop and a fast-fading pocket of urban London may be written all over the film, but they aren’t compellingly written into it, ultimately swamping the thin supernatural sleuth story at its heart.” – Guy Lodge, Variety

“Wright and co-writer Krysty Wilson-Cairns lean far too heavily on the hoary whodunit? clichés that are baked into the DNA of the giallo genre.” – David Jenkins, Little White Lies

Does it work as a horror movie?

“It’s an estimable, genuine horror movie that also manages to say something real — without trying to ‘elevate’ the genre.” – Glenn Kenny, RogerEbert.com

Will Edgar Wright fans enjoy it?

“Last Night In Soho is pure Wright all the way, and it works to a startlingly successful degree.” – Pete Hammond, Deadline Hollywood Daily

“This is by far the director’s best film since his Shaun of the Dead debut.” – Jason Solomons, The Wrap

“Last Night in Soho manages to continuously raise the bar for this storyteller…it can be very funny with Wright’s trademark wit.” – Ben Rolph, Discussing Film

“Has plenty of what you might call The Wright Stuff…[but] also marks a refreshing change for the director.” – Nicholas Barber, IndieWire

“He’s out of his comfort zone but not out of his range…it’s undeniably exciting and encouraging to see Wright taking a calculated risk away from his established brand.” – Marshall Shaffer, Slashfilm

“A more sober, if still stylish, filmmaking flex from Wright. Gone are the trademark crash zooms and whip pans, and the hairpin cuts…and goofy banter.” – Philip de Semlyen, Time Out

“As always, Wright is a tad too slick.” – David Katz, The Film Stage

“It’s a shame that the previously-thought-to-be inexhaustible energy resource of Edgar Wright’s omnivorous, giddy cinephilia should finally be showing signs running out.” – Jessica Kiang, The Playlist 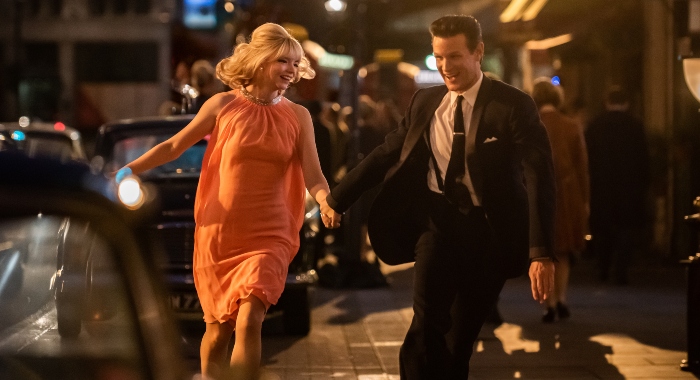 Is it mostly for fans of London – particularly in the 1960s?

“One of the best London movies of the new decade…a faithful yet playful homage to a lost and legendary Swinging ’60s London that is hard to find these days.” – Jason Solomons, The Wrap

“There’s enjoyment to be gleaned from the lovely location shooting, which takes in the length and breadth of Soho.” – David Jenkins, Little White Lies

“Familiarity with that time, its screen icons and its chart hits is not a requirement…young audiences will groove equally on the time-travel thriller as it spirals into bloody horror, even if they’ve never heard of The Knack… and How to Get It.” – David Rooney, Hollywood Reporter

“It is a mix that has you in its first half longing to go back to that period in time like protagonist Eloise, but then maybe rethink that decision.” – Pete Hammond, Deadline Hollywood Daily

“Wright’s film feels itself part-gentrified, dressing up cheap genre thrills in a distanced, dignifying gauze of nostalgia, and all the less fun for it.” – Guy Lodge, Variety

Who else is the movie for?

“Wright has lovingly made Last Night in Soho for himself and, well, it’s not clear who else.” – Guy Lodge, Variety 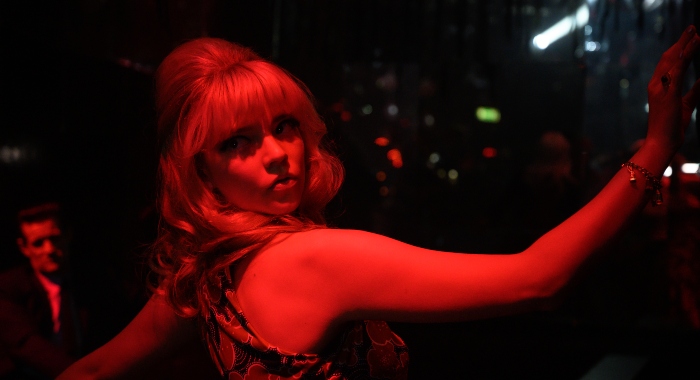 Will we love the soundtrack?

“Music has always been an integral part of Wright’s storytelling, but while it was perhaps foregrounded in Baby Driver, it’s more successfully integrated into the fabric of the film here.” – Wendy Ide, Screen International

“The passion for music in Last Night in Soho is akin to Quentin Tarantino’s Once Upon a Time in Hollywood.” – Ben Rolph, Discussing Film

“At a certain point, even the period music cues prove uninspired, albeit a consistent pleasure to listen to.” – Guy Lodge, Variety

How does Last Night in Soho look?

“Its pristine pop-art finish occasionally feels at odds with the grit of its milieu.” – Robbie Collin, Daily Telegraph (UK)

“This is Wright’s most female-led film to date, and the stronger for it.” – Wendy Ide, Screen International

“These are in some ways noticeably male-conceived female characters, but we can’t help who we are. When we’re male. Actually that’s one of the themes of the movie, taken to definitively toxic extremes.” – Glenn Kenny, RogerEbert.com

“[Wright’s] lead character hasn’t much in the way of actual character and still less of a sense of humor, which is definitely disappointing given that it just so happens to coincide with this being the first time Wright has made a film in which the protagonist is female.” – Jessica Kiang, The Playlist

“There’s a feminist undertow to its study of young women manipulated and misled by toxic masculinity, but the female characters themselves are blandly imperiled cyphers.” – Guy Lodge, Variety 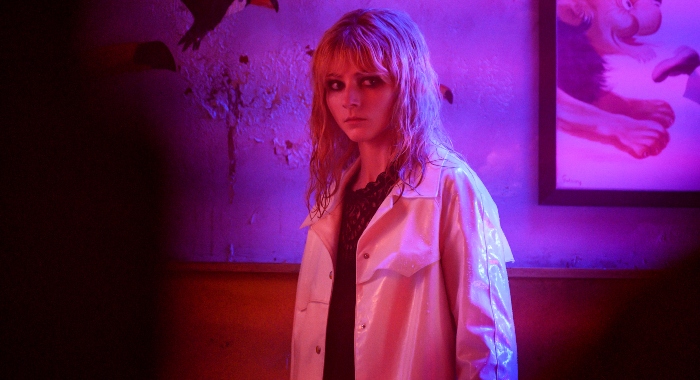 How is Thomasin McKenzie’s performance?

“She is so delightful and versatile that there doesn’t appear to be anything that she can’t do.” – Nicholas Barber, IndieWire

“McKenzie makes the most of this full blown starring role, well out of whack with what we have seen her do to date, and brings it home.” – Pete Hammond, Deadline Hollywood Daily

“Somehow underused despite being in every scene” – Jessica Kiang, The Playlist

What about Anya Taylor-Joy?

“Magnificent…Taylor-Joy is perfect for her role. She oozes charisma and star quality.” – Geoffrey Macnab, Independent (UK)

“Taylor-Joy steals her scenes — as she tends to — and she supercharges the movie with an ethereal out-of-time-ness that’s borderline ghostly.” – Philip de Semlyen, Time Out

“Anya Taylor-Joy gets to sizzle and smolder in the way that has made her one of the most exciting rising stars in the business.” – Marshall Shaffer, Slashfilm

“[She is] cleverly underused in screen time.” David Katz, The Film Stage

Is this also a proper posthumous showcase for Dame Diana Rigg?

“Last Night in Soho makes for a genuinely fitting epitaph for Rigg, who died after the shoot wrapped. It’s a proper showcase for her talents.” – Philip de Semlyen, Time Out

“This is most definitely a plum swan song for the ’60s icon.” – David Jenkins, Little White Lies

“She is as commanding and mischievous here as she ever was…what a superb final role for her.” – Nicholas Barber, IndieWire

“[She] socks it home for what sadly is her final screen appearance. She’s terrific” – Pete Hammond, Deadline Hollywood Daily 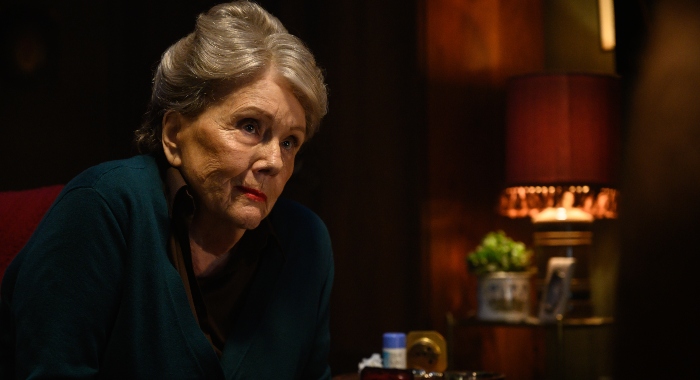 Are there any other performances that stand out?

“Another name that must be mentioned is Michael Ajao…as he is tenderly brilliant alongside Wright’s cast.” – Ben Rolph, Discussing Film

“The supporting cast amps up that heady air of ’60s-ness: Brit-cool icons like Rigg, Tushingham and Terence Stamp…help power the plot.” – Philip de Semlyen, Time Out

“Stamp’s role is pointless and weirdly truncated, a waste of an actor who, gorgeous at age 83, is one of our great silver lions.” – Stephanie Zacharek, Time Magazine

How well does Wright balance the movie’s dual narratives?

“Last Night in Soho’s mysterious connection between the past and present is acely executed.” – Ben Rolph, Discussing Film

“The skill with which Wright navigates between tones and time periods is exceptional.” – Nicholas Barber, IndieWire

“Wright is masterful at shaking up rhythms and visual textures to keep the senses stimulated beyond basic narrative engagement.” – David Rooney, Hollywood Reporter

“Unfortunately the contemporary scenes are nowhere near as vivid as those from half a century ago…this is an uneven film with an awkward, cumbersome narrative structure. ” – Geoffrey Macnab, Independent (UK)

“…the present-day and ’60s timelines overlap there a few too many swinging London clichés that might have you thinking of Austin Powers.” – David Katz, The Film Stage 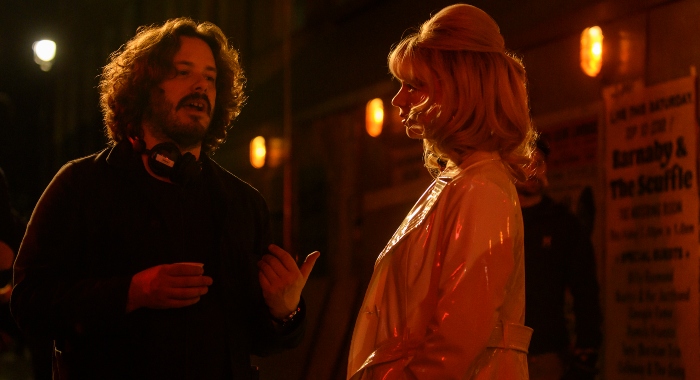 What’s the best thing about Last Night in Soho?

“The film opens with what might be the best scene of the year, it’s unforgettably excellent.” – Ben Rolph, Discussing Film

“If the first third of Last Night in Soho were a movie unto itself, it would be one of the most stylish and seductive pictures of the year.” – Stephanie Zacharek, Time Magazine

“It’s as a tribute to what makes cities so alluring and so dangerous that perhaps Wright’s film succeeds most.” – Jason Solomons, The Wrap

“It really dazzles, inspires, and even empowers as a celebratory work about British culture while never forswearing the historical scrutiny the past deserves.” – David Katz, The Film Stage

Does the movie ultimately stick the landing?

“The film brought me to tears a couple of times near the end…maybe there’s something in the water out here in Venice, I don’t know. But I fell hard for Last Night in Soho.” – Glenn Kenny, RogerEbert.com

“At a certain point, the plot becomes disappointingly unwieldy; by the end, it has cracked into dozens of irreconcilable pieces.” – Stephanie Zacharek, Time Magazine

“As it turns into a murder mystery and then takes a swerve into horror territory influenced equally by Hammer hauntings and giallo slashings the lack of consideration given to the plot starts to grate.” – Jessica Kiang, The Playlist

“There’s a point where the story jumps the shark…[and] becomes increasingly tough to take the plot seriously, or build an emotional connection with its climactic revelations.” – David Jenkins, Little White Lies