The CW’s modern-day remake of Kung Fu is about showing a character who has “a full life — not just the stereotypes,” the series' star says.

With a growing sense of awareness in the United States of the prejudices and hate crimes inflicted upon Asians, Asian Americans, and Pacific Islanders, it’s an interesting time for the premiere of The CW’s Kung Fu.

A new take on the martial arts franchise often associated with the David Carradine–starring Western from the 1970s, this version focuses on Olivia Liang’s Nicky Shen. A Chinese American college dropout from San Francisco, Nicky ditches the life her parents had planned for her and ends up practicing martial arts in a Shaolin monastery – until tragedy strikes and she ends up back home just when her family might need her the most.

In the series, which premieres April 7 and is created by Lost and Hawaii: Five-0 vet Christina M. Kim, Nicky is seen protecting herself and those closest to her with jabs, strikes, spins and kicks while barely breaking a sweat (and sometimes to the surprise of her siblings; Shannon Dang’s tech-wiz Althea and Jon Prasida’s medical student Ryan).

“It definitely conflates my own sense of self confidence,” Liang admitted during a recent phone interview with Rotten Tomatoes.

“Especially with the things that are happening in the world right now with Asian hate crimes and violence, I find myself walking on the street and being, like, OK what fight choreography did I learn that I can translate if need be at the drop of a hat right now?” she said.

Fight training is a relatively new skill set for Liang. Although she has a background in dance, martial arts was a completely new art form for her when she was cast as Nicky. Training began when she was still busy at her previous job on The CW’s Legacies. That Atlanta-set show’s stunt coordinator, David Morizot, showed her basic moves between takes before she worked with stunt coordinator Sam Ly to prep for the Kung Fu pilot. Then it was an aggressive three-to five-hours-a-day schedule for two weeks where  “they molded me and they whipped me into shape,” she said. 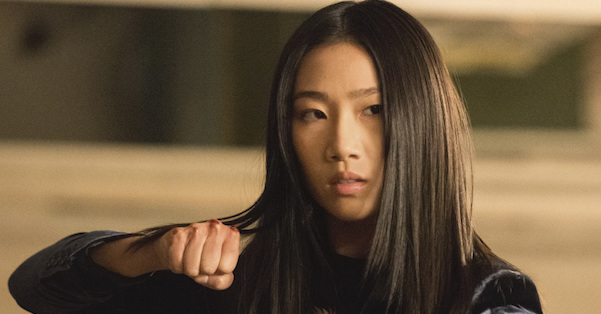 Although she’s not allowed to do any of the intense wire work lest she get injured and cause a delay in production, she said, “you can maybe expect to see at least 65% me” on screen during the fight scenes and that “I try to do as much as possible because it’s also just really fun and really empowering and I feel really cool when I do it.” But she gives credit to her stunt double, Megan Hui, and others in that department “if I ever look cool and badass and powerful during a fight scene.”

The show also both fits in with the other programs on The CW and stands out from them. It’s one of the few options on that channel that concentrates on a woman and is the only one with a predominately AAPI cast. And, although Kung Fu is about a woman crimefighter and counts Arrowverse kingpin Greg Berlanti as one of its executive producers, Liang’s lead doesn’t come with either superhero powers (like The Flash or Supergirl) or – depending on the season of Batwoman — family connections or the luck of finding the high-tech suit of a lost vigilante.

“I think it’s pretty cool that Nicky’s just a regular person who has a skill set and wants to use it for good,” Liang said. “She’s not a superhero and she’s not necessarily wanting to be a hero, but she is very heroic.”

Kung Fu also has the hefty task of demystifying the world of martial arts, an art form that Americans may find alluring and stereotypical when we see it portrayed by people of Asian descent (like in Ang Lee’s Oscar-winning Crouching Tiger, Hidden Dragon and in Bruce Lee’s films) or as agro when portrayed by white men (like in TV series like Cobra Kai, Arrow, or even the original Kung Fu).

“The great thing about our show is the diversity all around that’s happening,” Liang said, mentioning the Kim-led diverse writers room in particular and that she and other cast members have been reading Charles Yu’s National Book Award-winning Interior Chinatown, which discusses both immigrant Asian stories and TV’s depiction of them.

“I think, because we’ve so long been on the receiving end of this voyeuristic [depiction] of ‘the Orient’ and the mysticism of Asian-ness or otherness, we really know how it feels .. to be under that lens. We know what we don’t want,” Liang said.

The show also brings up the question of what is a stereotype and what is part of a culture. In the first episode, Nicky is angry that her mother’s (Tan Kheng Hua’s Mei-Li) big dream for her was that her daughter attend Harvard. This could be perceived as trumpeting a tired trope, but wouldn’t most parents want their kids to get good grades and go to a respected university?

“The interesting thing about stereotypes, from my perspective, is that sometimes they are true,” Liang said, adding that she had “kind of a Tiger Mom growing up [who] did want me to be a genius” and that “I took Abacus lessons for some reason.”

With Nicky, Liang said, “She was the kid who was pressured to go to Harvard and to be everything that her parents wanted her be…[but] we also get to see her break out of that. We get to see her forge her own path, fall in love, fight with her siblings. We see a full life; not just the stereotypes.”

Kung Fu premieres at 8 p.m. on Wednesday, April 7 on The CW.