This is not your grandpa's Krypton, promise the Syfy show's star Cameron Cuffe and executive producer Cameron Welsh. 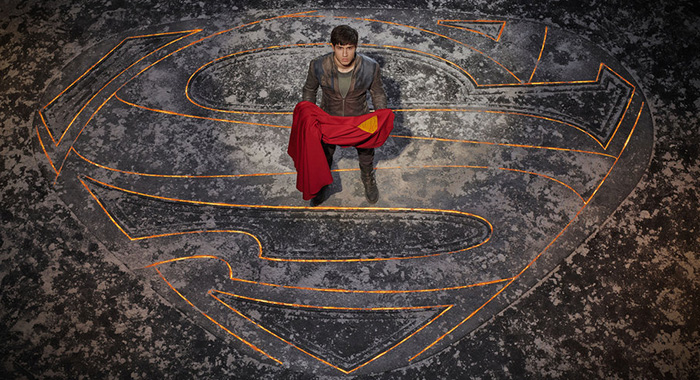 Krypton’s debut on Wednesday comes with a very different vision for the doomed home world of Kal-El and Kara Zor-El. Gone are the bright-white crystalline landscapes of Richard Donner’s 1978 Superman and the movie-serial look of the earlier Adventures of Superman television series. In its place is a Krypton that shares visual similarities with 2013’s Man of Steel and a number of the ideas sprinkled throughout its various comic-book appearances over the years.

And as both star Cameron Cuffe, who plays Superman’s grandfather Seg-El in the series, and executive producer Cameron Welsh told Rotten Tomatoes, every departure – and every reference – furthers the world they are trying to create, which, as Cuffe put it, is “the ultimate version of Krypton.”

With that in mind, here are five ways Krypton rebuilds Krypton. 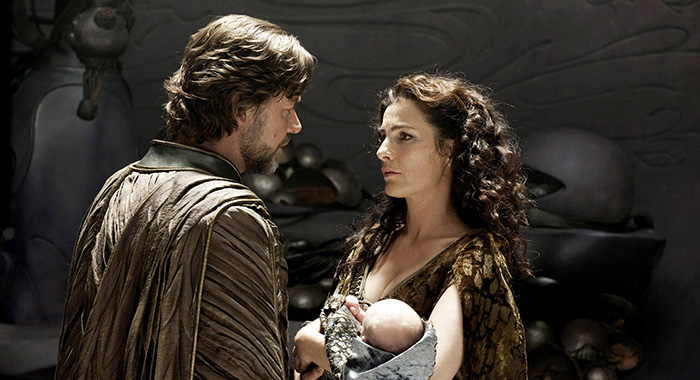 For most of Superman’s existence, it was presumed Kal-El was born in the conventional, human way. But in 1986, writer and artist John Byrne upended that notion in his Man of Steel miniseries. Instead, Kal-El’s “birthing matrix” was sent to Earth before Jor-El and Lara could even take a look at their infant son. That version of Kryptonian reproduction was eventually revised to reflect the Krypton glimpsed in the comics of the 1950s, but it formed the basis for the genetic “Codex” in Krypton executive producer David S. Goyer’s script for the Man of Steel feature film (pictured above) and reappears in the series as the Genesis Chamber.

Like the earlier matrix and Codex, Kryptonians of rank on the new series are paired to give their offspring the best genetic advantage, which gives rise to a few benefits and a number of problems for Kryptonian society.

“The Genesis Chamber has been around for thousands of years,” Cuffe explained. “Everything from [developing] embryos to deliveries is done by machine.”

But the Chamber also promotes a certain way of life, one which can be easily manipulated by the ruling elite.

“I think that’s part of what we’re exploring in Krypton,” Welsh said. “How those sorts of institutions, whether scientific or religious, how they can be corrupted by individuals with power and sway.”

He added, “I think the Genesis Chamber is at the root of a lot of the problems that Kandor and Krypton have.”

As Cuffe noted, the use of the Chamber led to Krypton outgrowing conventional gender roles, with women unquestionably holding positions of power and authority. It is a significant departure from the traditional depiction of Kryptonian women besides Supergirl herself; in fact, all we really knew about women in Kryptonian society is that they take their husband’s names (e.g., Alura Zor-El).

On Krypton, though, the House of Zod is represented by Alura (Ann Ogbomo), the Primus of the Kryptonian military guild, and her daughter Lyta (Georgina Campbell). Both are sworn to defend the city of Kandor at any cost.

“[Lyta] comes from this great house of warriors,” Cuffe explained. “And yet, she feels like there must be something more. There has to be a greater purpose to protecting lives. Lives have to be precious. You don’t destroy people, you have to save people.”

That internal conflict will resonate strongly as the series continues.

“For a character like Nyssa-Vex, it’s incredibly hard to get a handle on [her],” Cuffe said. “She comes from a family that is known for its Machiavellian style of politics that uses people and sees people and lies as a commodity. And yet, we’re not really entirely sure of her goals.”

Nyssa (Wallis Day) and Seg become involved in a far-ranging plot orchestrated by Nyssa’s father Daron-Vex (Elliot Cowan), which may stem straight from the execution of Seg’s grandfather Val-El (Ian McElhinney) years earlier. But as Cuffe suggested, she may have a plot of her own.

3. A World in Decline

Where most depictions of Krypton show it as a golden world suffering from an ecological breakdown, Krypton sets out to reveal a societal breakdown – a far cry from its usual sci-fi/fantasy utopia setting. An elite group divided into guilds and houses live high above in beautiful skyscrapers, while those with no status, the “Rankless,” toil on the ground where resources are becoming increasingly scarce.

“We wanted to create a society that wasn’t what you expect from Krypton,” Welsh explained. “I think people think a lot about Krypton as being the cold, sterile, scientific world that sort of evolved beyond emotion.”

Between the divides caused by the Genesis Chamber — the noble houses and the guilds and then the Rankless — the idea was to depict a society on a “downswing.”

“It had been through a golden era, and in a sense, there needs to be another renaissance,” Welsh said. “When you look at the society, it doesn’t really look like the kind of world that would birth the mightiest, the greatest superhero of all time. It feels like something has to change there, like there needs to be an almost social revolution in a way.”

That social revolution may come from Seg’s efforts or the group known as Black Zero, an apparent terrorist network rebelling against the Chamber rules.

“A lot of it really comes down to free will and the people’s ability to not have their lives predetermined by the Genesis Chamber,” he explained.

And with Krypton presented as a fallible place, Cuffe said the humanity of the characters will surprise viewers.

“As alien as it seems, and as foreign as it will appear, and as fantastical as it is, these people are still just people,” he said. “Good science fiction is about aliens and robots and monsters. Great science fiction, at the end of the day, is always about humanity and what it means to be human. And I think that’s the thing that I’m most excited about with this story.”

Kandor is traditionally known for two things: being Krypton’s capital city and being shrunk by Brainiac shortly before the planet’s destruction. In the years following his attack, Kryptonopolis became the capital and the setting for Jor-El’s momentous decision to send his son to Earth. Many years later, Superman would rescue to bottled city from Brainiac and place it in the Fortress of Solitude in the hopes of finding a way to restore it to regular size.

All of those deep connections to Superman made Kandor the best setting for Krypton‘s drama, doubly so with the revelation that Brainiac (played by Blake Riston on the series) is on his way to the planet 200 years ahead of schedule.

“I think people who know of Kandor will probably know that it was taken by Brainiac at a certain point. That’s a deep part [of the mythology]. There’s so little really known about Krypton, comparatively, that it’s one of the known things,” he explained. “It felt like a good opportunity there. Obviously having Brainiac as our big bad, it was the perfect fit.”

The presentation of Brainiac on the series is based on a 2008 Action Comics story line by Geoff Johns and Gary Frank in which “the true Brainiac” comes to the Earth for the first time. It also depicted his theft of Kandor, filling in a significant plot point for Johns’ exploration of the planet at the time. Brainiac’s look on Krypton, more bio-organic than ever, faithfully recreates the style of the character in that tale.

“I love that Geoff Johns story, it’s a great story. I love that version of Brainiac,” Welsh said.

Congratulating the design team at Legacy Effects for their work on bringing Brainiac to life, he added, “I think they just did a phenomenal job with the prosthetics and with the suit. It looks super cool.

“It’s been a long wait for Brainiac to make it to screen,” he continued. “It’s pretty exciting that he’s just around the corner now.”

(Read more about bringing Braniac to life in our interview with Goyer.)

5. Adam Strange in a Strange Land 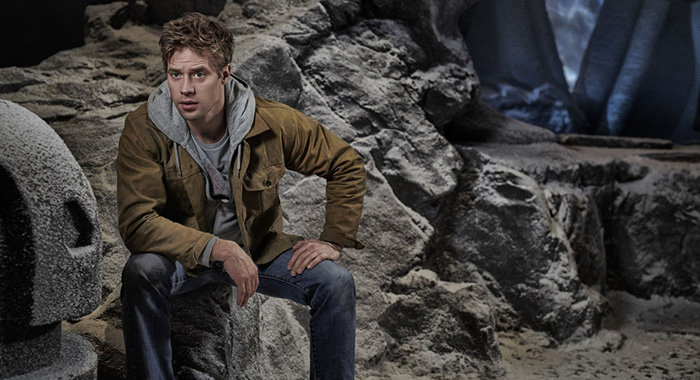 And since the program is the first extended look at Superman’s home world, Adam Strange (Shaun Sipos) offers some relatable human context. As the series begins, he finds himself propelled 200 years into his past to help Seg-El face down Braniac. As Welsh put it, he “kind of puts a fire underneath Seg — he’s the call to action, in a way.”

As seen in some of the more recent previews, Strange lays it out plain: If Seg fails, both their worlds will fall to Brainiac. While his warning gives the show stakes, Welsh revealed that Strange also becomes a “tour-guide” of sorts for the audience.

“He helps us find [our way] into this world of Krypton,” he said.

At the same time, Strange is also at the beginning of his own legend, according to Welsh. The character, created by Julius Schwartz and Murphy Anderson, is something of a mix of Flash Gordon and John Carter of Mars — DC’s own pulp sci-fi hero. But as Krypton begins, he is “probably not as far down the road of heroism as he probably thinks he is,” according to Welsh.

“He’s a fun character as well. He brings a lot of levity to it,” Welsh said. “The dynamic between Shaun and Cam is brilliant, they’re great on screen. They’re both phenomenal actors, and they just really shine.”

Another time-lost hero, Jack Knight, visited a pre-destruction Krypton in 1999’s Starman #51 — an issue co-written by Goyer — but Welsh said he and his team came upon Strange (who would also appear Starman soon after) without consulting that particular series or issue.

“It wasn’t discussed really,” he said. “[But] the character may well still be on the table.”

As the show develops, Welsh may eventually introduce Rann, the planet Strange ends up on in his own comic book adventures. Strange’s connection to Hawkman’s homeworld of Thanagar may also factor in at some point, but first and foremost, he and Seg must save Krypton from Brainiac. Should they be successful, Welsh said Strange could become “a great sort of doorway into the space sector.”

With Welsh name-checking the DC Comics miniseries Cosmic Odyssey, and Cuffe hoping to meet The Omega Men at some point, Krypton could very well become a home for some of DC’s strange and wonderful cosmic characters. 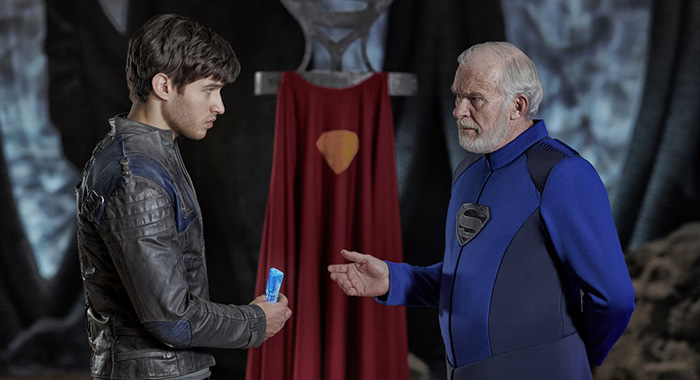 Even with its notable connections and departures from canon, Welsh wants viewers to come to the series with an open mind.

“There may be an idea that this is a prequel, and we know how it’s going to end — Krypton’s going to blow up — and there may be a sense of inevitability about that,” he explained. “It’s really not the case with the show.”

Thanks to the arrival of Adam Strange and Brainiac, Welsh said, “the entire space/time continuum has actually changed,” opening up the possibility of Krypton surviving in some form.

“It is a show where literally anything can happen,” he added. “I think whatever you thought you knew about the story of Krypton is set to be completely challenged by this series.”