Stick a knife in Killing Eve. The groundbreaking BBC America series about the cat-and-mouse game between a manipulative assassin (Jodie Comer’s Villanelle) and investigator (Sandra Oh’s Eve Polastri) who can’t quit each other is ending with its fourth season.

But, as the last chapter begins to unfold on February 27, there are still many remaining questions. We still don’t know what revenge tactics Fiona Shaw’s Carolyn Martens is capable of after the death of her son last season. We don’t know enough about the highest ranking members of The Twelve, the “company” of sorts that hires assassins. And we don’t know if Eve and Villanelle will stop trying to kill each other long enough to join forces, romantically or otherwise. So Rotten Tomatoes asked season 4 head writer Laura Neal to answer some of these questions. 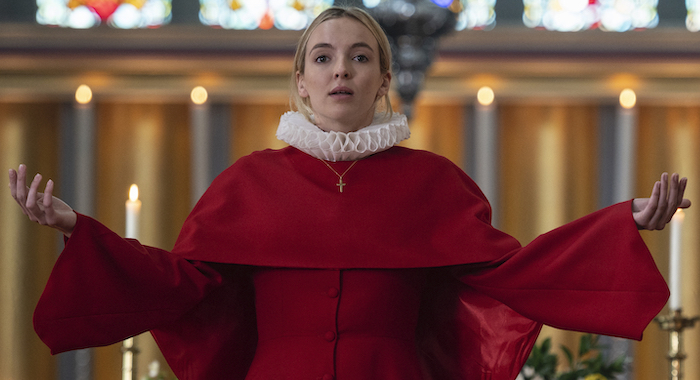 Whitney Friedlander for Rotten Tomatoes: The show, famously, chooses a new lead writer each season and it’s always a woman:,starting with series creator Phoebe Waller-Bridge, then Emerald Fennell, and Suzanne Heathcote did the third season. How did you come to work on the last one?

Laura Neal: Yeah, it was a huge responsibility. The way I came on from season 4 was that I had written on season 3 with Suzanne And I made it quite clear how much I enjoyed it and gave people absolutely no choice other than to offer me the job. I nerdily am obsessed with the show.

There’s tons of religious messaging this season; particularly with Villanelle, who is trying to find absolution for her past crimes and prove to Eve that she’s changed. The season opens with her determination to be baptized and the title of the episode is “Just Dunk Me.” Why was that important for her to be the one going through that instead of Eve?

That’s quite a short step between Villanelle wanting to be a good person and deciding to surround herself with good people. She’s such a good mimic. We’ve seen that in the past. It’s almost like her psychology is If I can study these people enough, I can therefore become them, so that was the practical decision to put her in that environment.

And I think there’s a thematic reason too. In the show a lot, we explore the theme of rebirth and that’s linked in itself to one of the themes of change. The baptism imagery, you’ll see that a lot throughout the season, because it feels really true to the central question of the season, which is: “Can these women achieve change?” 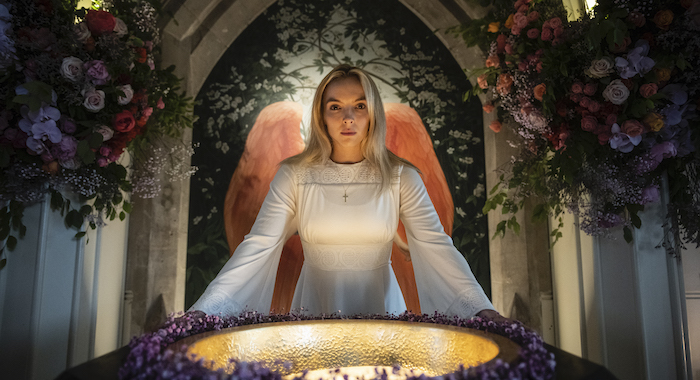 There’s also a nature vs. nurture question of the show. Villanelle’s childhood was not a good one. And you’re exploring the question of whether Villanelle would have become an assassin had her younger life been better.

Neal: We wanted to dig deeper with that this season, and I know Jodie was really keen to too. We enjoy watching her so much as this murderous psychopath, and we have done for three seasons. It was time to peel back the layers a little bit on Villanelle. And it was interesting to me this question Villanelle is asking of Was I born this way or was I made? And it feels quite emotional, actually, for her to consider that and for her to come to terms with the fact that, if she was born like that, then potentially there is no avenue for change for her and what does that do to her and her journey.

It’s also you know, relevant question to Eve and Carolyn: How much of me is changeable? How much of is fixed? 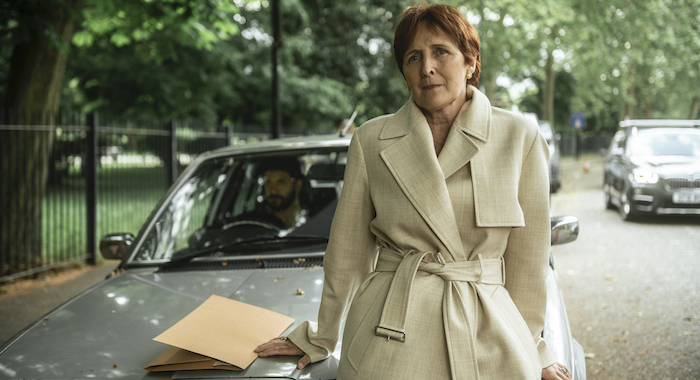 The story started out as being Eve versus Villanelle. But, as the series has progressed, you’ve given Carolyn more to do — especially now that she’s on a revenge path after the death of her son, Kenny (Sean Delaney) in the third season. How do you decide how much screen time to give each character and story?

Neal: It’s kind of an organic decision. We let the characters tell us at what point they’re going to rise to the surface and be the top story and then at what point they’re going to take a step back. I think it’s been really exciting to explore Carolyn’s world more in this season and Carolyn’s storyline. But the show at its core is about the relationship between Eve and Villanelle. And we try and keep an eye on that throughout the writing process. 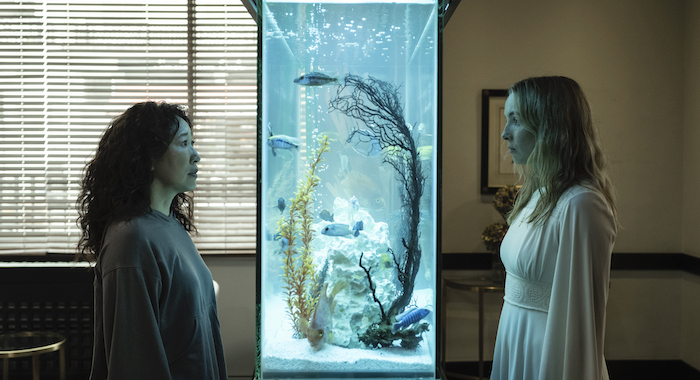 Eve and Villanelle seem destined to be star-crossed. You even have an homage to Baz Luhrmann’s Romeo + Juliet this season where the two see each other through a fish tank. How did that come about? Were you just a fan of the movie when you were growing up?

Neal: That was actually a directorial decision. That was Stella Corradi’s baby. She directed the first two episodes. She really wanted that in there. And I think what she was connecting to was this idea that even Villanelle are in some way fated. And I think you can interpret that word a hundred different ways. There’s no denying that there’s a cosmic pool between these two women. That’s what she was trying to kind of allude to in that moment.

I know it’s the question on everyone’s lips: What’s the nature of the attraction between these two women and part of what I love about the show is the ambiguity of that relationship. It’s something we certainly like drill down into much more than we’ve done before in this season.

There’s a whole load going on in that allegory [to Romeo and Juliet]. I think, for me, the fate thing is probably the most important aspect of it. But I think there is this sort of sense of there being a cosmic plan for Eve and Villanelle that I really leaned into this season. 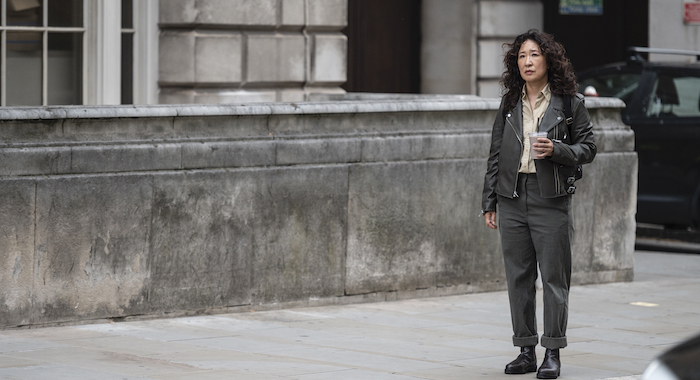 That said, Eve does have a new flame in Yusuf (Robert Gilbert), whom you use for eye candy but also for his skills as a former army officer. Can you talk about the decision not to make Eve celibate, but also kind of have her dead inside when it comes to relationships?

Neal: We wanted to shake things up a little bit for Eve and her romantic life, and we enjoyed the idea that this new Eve that we’re seeing might have a new type of partner in this series. He’s an ex soldier. He’s somebody who is not afraid of danger. He’s not afraid of the unsavory elements of the human psyche. And in fact, he’s somebody who really supports Eve in those aspects of herself and celebrates them. And it was exciting for us to have a companion for her that was kind of encouraging of her, I guess, more nihilistic impulses.

Do you think about what happened to Niko (Owen McDonnell), Eve’s estranged husband, after he was injured last season and then told her to “piss off forever”? Will we see him this season?

Neal: I think I can probably say that that the relationship between even Niko is closed. I really hope he still has his mustache. I can’t even imagine what he would look like without it. I hope he’s found happiness for himself after being stabbed in the neck.

If Villanelle is retiring, there’s an opening in the assassin administration. You introduce a character named Pam (Anjana Vasan) this season. We know she works in a funeral parlor. Is there a question of whether she can become the next Villanelle?

Neal: That’s the question that we were excited by in the series. And that’s what her storyline explores. Pam started out as a character because we were curious, as writers, to understand the origin story of one of these characters. We meet Villanelle already very ensconced in The Twelve. And it was curious to us to introduce somebody who’s right at the beginning of that journey and see what that that looks like. 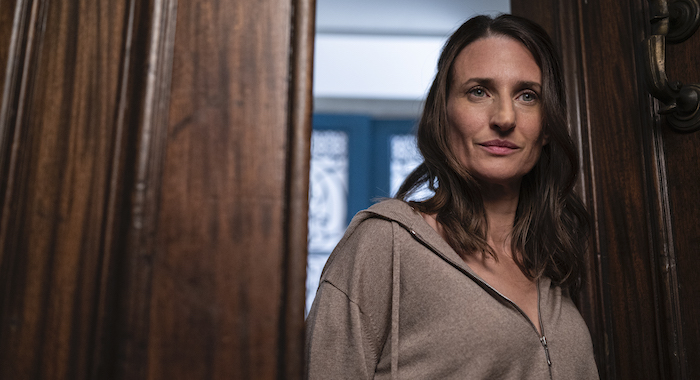 You’ve also upped Camille Cottin, who plays Hélène, to a series regular this season. She’s an older, more established assassin and Eve becomes more obsessed with her. We also know that she has ties to assassin talent agency The Twelve. Is she Eve’s new Villanelle?

Neal: You can see the similarities between the Eve and Villanelle relationship with the one with Eve and Hélène. I think it’s a little bit more layered than that. I think there’s there’s something different going on there. I was really excited by this idea of a new Eve that has come through three seasons interacting with Villanelle and the chaos and the death and destruction that that has brought. She’s very different than the Eve that we saw at the start of season 1. I’ll be curious to see how she behaves differently around Hélène than she did with Villanelle in season 1. What has this done to her in terms of her relationship with those kinds of women?

Neal: I couldn’t possibly answer that question. I will say that both of those questions are things that we have discussed long and hard in the writers room. So expect to see an exploration, if not an answer.

Is there a chance Phoebe Waller-Bridge would appear in the show as an actor?

Neal: Well, she’s not in season 4. So I can probably say she’s not going to be in season 4 whether Phoebe would ever appear in any kind of Killing Eve role, you’d have to ask her.

Wait. Are there talks of Killing Eve spin-offs?

This is an odd question, but there’s lots of references to ice cream in the series. The first time we see Villanelle in the series, she dumps gelato on a little girl’s lap. And we see people eating ice cream at pivotal scenes this season. Is there an Easter egg in there?

Neal: It’s not an intentional thing. I was just wondering as you were saying that because, I agree, there is a lot a lot of ice cream and I was wondering where it’s come from. I think that scene is really iconic — that very beginning scene from the first episode — and I’m sure that’s lodged in every single writers’ head because it’s so perfect as a scene. I also just wonder whether that’s a British thing, like Brits in the sun reached for the ice cream. We were writing it and it was very hot and we were subconsciously desiring ice cream at all times. And so that worked its way into the script.