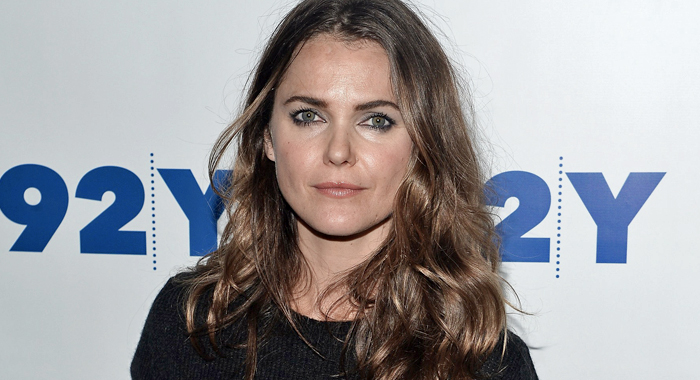 Production is scheduled to start in just a few weeks on next year’s Star Wars: Episode IX, but until today, the film had not yet received any new casting news. Obviously, Star Wars: The Force Awakens and Star Wars: The Last Jedi both introduced new characters and actors, but those movies also dispatched with some of those as well. J.J. Abrams is returning to direct the ninth episode (after also directing Star Wars: The Force Awakens), and for his first new star, he went back, way back, to his roots. Keri Russell, who starred as TV’s Felicity, which was J.J. Abrams’ first brush with success, has signed on for a role that “calls for action-heavy fight scenes.” We don’t know yet anything else about Russell’s role, but one can guess that the fight scenes might involve melee fighting more than just making pew-pew-pew sounds. Star Wars: Episode IX is scheduled for release next year on December 20th, 2019, which puts it within a week either way of Jumanji 3 (title pending), Sony’s Masters of the Universe, and the Agatha Christie mystery Death on the Nile (Kenneth Branagh’s sequel to Murder on the Orient Express).

One of the biggest stories coming out of last year’s awards season was the underdog success of actress-turned-director Greta Gerwig’s semi-autobiographical Lady Bird (Certified Fresh at 99%) starring Saoirse Ronan and co-starring Timothee Chalamet (whose Call Me By Your Name also did well). For her next film, Gerwig is turning to classic literature in the form of Little Women. Louisa May Alcott’s novel has been adapted frequently throughout Hollywood history, but the most recent major version was the 1994 film starring Winona Ryder, Susan Sarandon, Claire Danes, and a very young Kirsten Dunst. Greta Gerwig is attracting some major star power for her version, with Meryl Streep and Emma Stone both in talks, as well as her Lady Bird stars Ronan and Chalamet. Who’s playing who isn’t clarified yet, but the producers will reportedly next test some young actresses for the role of Beth against Emma Stone (suggesting she’s playing Jo or Meg). There’s no release date for Little Women right now, but a late 2019 “awards season” release seems likely.

2. IDRIS ELBA TO ANTAGONIZE HOBBS AND SHAW IN FAST AND FURIOUS SPINOFF

The Fast & Furious spinoff starring Dwayne Johnson and Jason Statham as Hobbs and Shaw ostensibly has a lot of star power even just with those two leads, but the project added another popular name this week. Idris Elba, who appears to now be done as Marvel’s Heimdall, is in advanced talks to play the Fast & Furious spinoff’s villain. Hobbs and Shaw will be directed by David Leitch, who’s coming off a string of box office and critical successes with Deadpool 2, Atomic Blonde, and John Wick (which he co-directed). The news about Idris Elba joining Hobbs and Shaw came in the same week in which we also learned that BAFTA winner Vanessa Kirby (who played Princess Margaret in The Crown) will also co-star in the spinoff. Universal Pictures will release Hobbs and Shaw on July 26th, 2019, which is the weekend after Disney’s remake of The Lion King.

3. THIS IS US AND LADY BIRD STARS TEAM UP WITH IT COMES AT NIGHT DIRECTOR

If you saw last year’s atmospheric post-apocalyptic thriller It Comes at Night, your immediate reaction may not have been, “I bet this guy directs a musical next.” If you had thought that, you would’ve been eerily precognitive, because that’s exactly what director Trey Edward Shults is preparing to film in August. The movie will be called Waves, and two of the film’s leads will be Emmy winner Sterling K. Brown (This is Us, The People vs O.J. Simpson) and Academy Award nominee Lucas Hedges (Manchester by the Sea, Lady Bird, Three Billboards Outside Ebbing, Missouri).  Waves is described as a “a coming-of-age tale that tells two contrasting teen love stories, focusing on both suburban teenagers and their parents,” and also a musical drama with a score by Trent Reznor of Nine Inch Nails. Lucas Hedges’ next film, Boy Erased, has been scheduled for release for November 2, 2018, as part of the awards season.

The Pacific Rim franchise is probably done after a grand total of two movies, following the disappointing $59 million domestic take of this year’s Pacific Rim: Uprising. That does not, however, mean that the franchise’s production company, Legendary Entertainment, is necessarily getting out of the “giant mecha” movie business. There are plenty of popular mecha franchises, especially when one considers other markets like Japan. Legendary announced yesterday at the Anime Expo in Los Angeles that they are partnering with Gundam producers Sunrise on a live action Gundam movie. There are no directors, writers, or actors to report on yet, or specific story details, except the general Gundam premise, which is that it’s “set in an era in which humanity’s growing population has led people to emigrate to space colonies. Eventually, those living in colonies seek autonomy, and launch a war of independence against the people living on Earth.” Except, of course, that premise leaves out the giant robots, which is sort of like forgetting to mention that there’s a giant lizard in Godzilla. This Gundam news came within days of Legendary Entertainment securing a new $1 billion financing deal. We live in a time where filmmakers use their money really, really wisely.

5. NICOLAS CAGE TO VOICE SPIDER-MAN (NOIR) IN INTO THE SPIDER-VERSE

In addition to the live-action Spider-Man movies starring Tom Holland, Sony Pictures also has the animated Spider-Man: Into the Spider-Verse, which focuses on Miles Morales (AKA Ultimate Spider-Man), and his encounters with the larger universe of alternate Spider-people. We’ve already known for a while that Hailee Steinfeld is going to be voicing Spider-Gwen, and this week, we learned of another bit of awesome voice casting. Nicolas Cage has long been known for his desire to appear in superhero movies (for one thing, the dude named himself after Luke Cage), including Tim Burton’s never-made Superman Lives, a couple of films as Marvel’s Ghost Rider, a role in the Kick-Ass movies, and voicing Superman in this summer’s Teen Titans Go! To the Movies. He can now add another notch to his utility belt, as he will provide the voice of “Spider-Man Noir,” who is sort of like a spider-themed take on Rorschach from Watchmen. Spider-Man: Into the Spider-Verse swings into theaters this December 14th, 2018.

The Top Story in last week’s Ketchup was the news that three young actors were up for the role of Goose’s son in next year’s sequel, Top Gun: Maverick. At the time, two of the candidates were Nicholas Hoult (About a Boy, Mad Max: Fury Road) and Glen Powell (Hidden Figures, Everybody Wants Some!!), but it actually went to Miles Teller instead. The star of Whiplash and The Spectacular Now will play the son of Anthony Edwards’ character Goose, and he will be mentored by Tom Cruise’s Maverick. Paramount Pictures has scheduled Top Gun: Maverick for next summer on July 12th, 2019, which puts it a week after the sequel Spider-Man: Far From Home, and the week before Disney’s remake of The Lion King.

3. CHUCKY WILL BE YOUR FRIEND ‘TIL THE END: CHILD’S PLAY IS GETTING REBOOTED

Many genres (romantic comedies, for example) are arguably on a downswing nowadays, but one that is doing just fine is horror. Hollywood especially likes horror because they can generally be produced relatively cheaply, meaning more profit when they are hits (IT, for example, earned $700 million from a budget of $35 million). We’re obviously getting plenty of original horror films (Hereditary, A Quiet Place, etc), but studios also see an opportunity to revive old properties. This year marks the 30th anniversary of the original Child’s Play, which introduced the killer doll Chucky, who went on to star in six more movies (most recently, as direct-to-video). MGM has announced plans to hit the reset button on Chucky with a new Child’s Play, which will be helmed by the director of the not-yet-released horror film Polaroid. The screenplay is being written by one of the writers of Kung Fury 2, and the producers’ credits include last year’s aforementioned IT remake. The details of the story haven’t yet been confirmed, such as whether the Chucky doll will be “new” in the reboot or, say, an implied revival of a classic toy. If it’s a true reboot, some writers are already pointing out the legacy downsides.

Despite the continuing streak of Rotten Tomatometer scores for video game adaptations, Hollywood producers continue to make them and are able to attract major stars (or at least, former major stars). Perhaps they figure that, by this point, the laws of probability favor an eventual good movie surfacing, or maybe they just like making really bad ones (someone has to keep future MST3K casts stocked with material). Paramount is currently preparing their adaptation of SEGA’s popular Sonic the Hedgehog franchise, with James Marsden and Tika Sumpter already cast (in live-action roles, since Sonic will be CGI). Besides Sonic himself, one of the film’s biggest roles will be the villain, Dr. Ivo “Eggman” Robotnik, and now we know that he will be played by Jim Carrey. Carrey obviously has experience playing villains, which in the past has included the Riddler (Batman Forever), Count Olaf (A Series of Unfortunate Events), and the Grinch (in Ron Howard’s live-action film). Paramount has scheduled Sonic the Hedgehog for release next year on November 15th, 2019, where it will go up against Melissa McCarthy’s Christmas comedy Margie Claus (and a week later, the next Terminator movie).

One of last year’s biggest box office bombs (relative to budget, especially) was the live-action remake of Ghost in the Shell, starring Scarlett Johansson as “The Major,” which many people felt represented a prime example of “whitewashing” a role originally intended to be of Asian heritage. Following that, one could have assumed that Johansson might choose not to work with director Rupert Sanders again, or that she would try to avoid potentially controversial roles (cultural appropriation, etc). Yeah, both of those assumptions would have been way off. Johansson and Sanders are reuniting for a biopic called Rub & Tug about the life of Dante “Tex” Gill. So, why is that controversial? Dante “Tex” Gill was born as Jean Marie Gill, but identified as a man later in life when he “became the crime kingpin of 1970s Pittsburgh through [his] empire of illicit massage parlors and an anabolic steroids ring that helped fuel the Pittsburgh Steelers’ NFL dynasty, all the while cross-dressing and leaning on [his] allies in the gay community to help grow [his] empire.” The reactions and backlash were quick and frustrated, especially from trans actors who saw this as a role that one of their own should have had the chance to own. Scarlett Johansson responded to the criticisms, saying, “Tell them that they can be directed to Jeffrey Tambor, Jared Leto, and Felicity Huffman’s reps for comment.” Rub & Tug will be director Rupert Sanders‘ third film, following Snow White and the Huntsman (48%) and Ghost in the Shell (44%).