Spider-Man gets a title, Firestarter gets a remake, Indiana Jones gets pushed back, and Jared Leto doubles down on comic book roles.

WHO WILL PLAY GOOSE’S KID IN TOP GUN: MAVERICK? 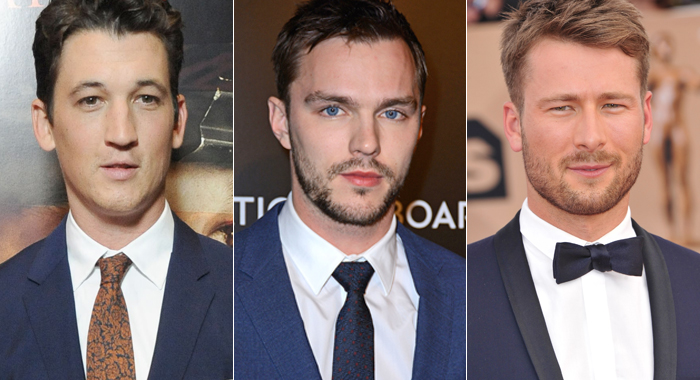 For a movie that started filming almost a month ago, we’ve heard surprisingly little about casting for the sequel Top Gun: Maverick. The focus has been entirely on returning cast members from the original 1986 movie, and just two actors, at that (Tom Cruise and Val Kilmer). The reported premise hinges upon how “the navy is very different now than it was in 1986,” so ostensibly, the sequel has to have more cast than just those two guys. One of the new characters is going to be the son of Anthony Edwards’ “Goose” character, and we now know which three young actors Paramount Pictures is considering for the role. Miles Teller is probably best known for Whiplash, The Spectacular Now, or maybe that horrible Fantastic Four reboot. Nicholas Hoult has also made a name for himself with roles in About a Boy, Mad Max: Fury Road, and the recent X-Men movies, but he’s also British (“Goose,” not so much). Finally, there’s relative-unknown Glen Powell, who played John Glenn in Hidden Figures, and also co-starred in Everybody Wants Some!!, Ride Along 2, and The Expendables 3. Top Gun: Maverick is scheduled for July 12th, 2019 (the week after Spider-Man: Far From Home, and the week before Disney’s remake of The Lion King).

1. THE NEXT SPIDER-MAN REVEALS ITS TITLE, AND SILK MIGHT GET HER OWN MOVIE TOO

The tricky thing about reporting on certain upcoming Marvel movies is dealing with the potential to unveil various spoilery things spinning out of Avengers: Infinity War. And yet, these movies are coming, and Marvel Studios still wants to start promoting them (even though Avengers 4 remains 10 months away). Perhaps that’s why they let Tom Holland do it on his Instagram account, where he revealed this week that the next movie is called Spider-Man: Far From Home. That title has multiple connotations, related to both Avengers: Infinity War and the filming locations in London and Europe that we already know about. In other Spider-Man news, Sony Pictures revealed this week that they are now developing a Silk movie, based on the Marvel character introduced in 2014. Korean-American teenager Cindy Moon was the other student bitten by that radioactive spider who gained different superpowers and who went a different route, spending years in captivation (explaining why she showed up so relatively late in the comics). Silk joins Sony’s other Spider-Man-related movies, including this year’s Venom (10/5/18) and Spider-Man: Into the Spider-Verse (12/14/18), and Morbius (more on this below), Nightwatch, and Silver & Black.

Marvel Studios’ MCU (Marvel Cinematic Universe) is a box office juggernaut that shows no sign of stopping, and with that, it’s adding new characters pretty much every year. Black Panther was one of this year’s biggest hits, and also an example of diversity working as a box office model. That umbrella hasn’t yet spread to everyone, but one key group was addressed this week. Marvel Studios boss Kevin Feige was asked whether LGBTQ+ characters might join the Marvel Cinematic Universe, and Feige’s answer was a terse “Yes,” followed by a “Both” when asked if the character(s) would be “ones you’ve seen and ones you haven’t seen.” This led to much speculation, with Tessa Thompson’s Valkyrie being most often cited as a candidate (mostly because of a Thor: Ragnarok deleted scene). Possible new heroes  include Wiccan (Scarlet Witch’s son… it’s a long story), his boyfriend Hulkling, and also America (Chavez), who would also be Marvel’s first Latina superhero. (This all presumes Kevin Feige wasn’t including the various LGBTQ X-Men characters he might someday be able to include.)

Last year’s The Dark Tower might have been a flop, but the $700+ million global box office of IT is all Hollywood remembers, so Stephen King adaptations are one of the hottest trends going in 2018. Mostly, the focus is on remakes (like Pet Sematary, 4/5/18) and sequels. One of the former is going to be Firestarter, which is also sort of timely in 2018 when one considers how much Netflix’s Stranger Things paid homage to it. The job of directing Universal Pictures’ Firestarter remake has gone to Turkish-German director Fatih Akin (Goodbye Berlin, Soul Kitchen), with Blumhouse also signing on as co-producers. Another upcoming Stephen King adaptation is Doctor Sleep, which is also a sequel to The Shining (with Ewan McGregor playing the adult Danny Torrance). Rebecca Ferguson (Mission Impossible: Fallout) has joined Ewan McGregor in the Doctor Sleep cast, in an unknown role. Finally, there’s IT: Chapter Two (9/6/19), and this week, we saw our first images from the set.

It has little to do with his comedy, but the current Saturday Night Live star who’s arguably been in the news the most lately is Pete Davidson (AKA the future Mr. Ariana Grande). Davidson also became one of the SNL stars who will have another job this summer, as he’s joined the cast of the comedy Big Time Adolescence. He’ll also be joined by Sydney Sweeney (Eden from The Handmaid’s Tale), rapper Machine Gun Kelly, and Oona Laurence (A Bad Moms Christmas). Big Time Adolescence last made the news in 2014, when it was one of the projects on the Black List of Unproduced Screenplays.

5. MARK WAHLBERG TO REVIVE SPENSER FOR HIRE FOR NETFLIX, PLUS A MILE 22 SEQUEL

With his run on Transformers apparently done, Mark Wahlberg is all about establishing new franchises now, it appears, as we heard about two such moves this week. First up, there’s Wonderland, a new project set up at Netflix that is an adaptation of the 2013 novel by Ace Atkins, which posthumously continued author Robert B. Parker’s Spenser for Hire series. Parker’s character, like Wahlberg himself, is famously from Boston, so it was perhaps inevitable that Wahlberg would someday play him. The other new franchise in Wahlberg’s potential filmography is a sequel to 22 Mile, even though that movie doesn’t come out for another six weeks (8/17/18). Regardless, STX has already hired a screenwriter for the 22 Mile sequel.

Whether a story is Fresh or Rotten is, obviously, very often a matter of perspective. For example, even though 2008’s Indiana Jones and the Kingdom of the Crystal Skull was Certified Fresh at 77%, the audience score was only 53%. So, perhaps those people see any delay of Indiana Jones 5 as a Fresh story, even if it’s a Steven Spielberg action flick and, ostensibly, the movie with which he will be able to retire Harrison Ford’s take as the character. Yesterday, the news broke that Solo: A Star Wars Story co-writer Jonathan Kasdan has been hired by Paramount Pictures to replace David Koepp as the Indiana Jones 5 screenwriter. Within a few hours, that led to a clarification that Paramount was also holding back filming of the sequel, which was previously scheduled to start in April, 2019 to meet a July 10th, 2020 release date. With that delay, Harrison Ford is likely to be at least 77 years old when Indiana Jones 5 starts filming. This move also might mean that Steven Spielberg will be able to film his remake of West Side Story sooner than had previously been expected.

When Sony Pictures cast Tom Hardy as this year’s Venom (10/5/18), many people noticed that it meant a major DC Comics movie star (Bane from The Dark Knight Rises) had switched over to Marvel (albeit not Marvel Studios, specifically). Now we have another DC Comics villain making the same move, and this time, it’s their most recent Joker. Jared Leto remains attached to a solo movie as The Joker, but he’s also now signed with Sony Pictures to star in their adaptation of Marvel Comics’ Morbius (AKA Morbius the Living Vampire). Daniel Espinosa (Life, Child 44, Safe House) will direct Morbius, as adapted by the screenwriting team (Matt Sazama and Burk Sharpless) behind Gods of Egypt (15% on the Tomatometer), The Last Witch Hunter (17%), and Dracula Untold (24%). In other words, the bar for “success” here might be set at 25% on the Tomatometer. Morbius the Living Vampire has been a Spider-Man supporting character since 1971, but he also was almost a villain in Wesley Snipes’ Blade franchise.

As evidenced by the dominance of superhero movies from Marvel Studios, Fox, and DC/Warner Bros., comic books are a consistently reliable source for adaptations. Not all of them are about superpowered beings in spandex, though; comic books have been used to tell a wide range of stories in a variety of genres. For instance, comedian/actress Rebel Wilson added a comic book-inspired film to her resume this week, as she is producing and will star in an adaptation of Image Comics’ Crowded. The story is set in “a future where the world’s economy is centered around job sharing and apps, and the latest trend is Reapr, a crowdfunding platform that funds assassinations,” and Wilson’s character will have just discovered she’s a target. We’re calling Crowded a Rotten Idea based on Rebel Wilson’s track record on the Tomatometer: Of her last 13 films, the only two that were Fresh were the first two Pitch Perfect movies. The other 11 were all Rotten.

If you’re a producer or director who wants to get in on the comic book craze, but you don’t have any pull with Marvel or DC, your best bet is probably the  indie comics route. And there are literally thousands of indie comic book titles — so many, in fact, that there are titles that even avid comics readers may not be familiar with, like Razor from indie publisher London Night Studios. Recognizable or not, Razor is officially the latest comic book series picked up for the adaptation treatment, with Rob Cohen as director. The title character will be played by Emma Dumont, who costars in Fox’s The Gifted as Lorna Dane, a.k.a. X-Men member Polaris. The title Razor refers to the blades that cover the character’s bodysuit, so that her punches and kicks also rip her enemies apart, kind of like Wolverine. None of the films that Rob Cohen has directed in the last 19 years has scored above 53% on the Tomatometer, which is what The Fast and the Furious earned, and even that’s still Rotten.