Plus: Genera+ion co-creator on Euphoria comparisons, progressing with In Treatment, and more.

In the upcoming seven-part HBO limited series Mare of Easttown, Kate Winslet stars as a small-town Pennsylvania detective who grapples with past and present troubles while investigating a murder. It’s a character that Winslet says she may not be that similar to — in part because, as she told journalists Wednesday during HBO and HBO Max’s all-virtual winter Television Critics Association press day, “I’d be a f—ing lousy detective.”

Read on to learn more about Mare of Easttown as well as details on HBO Max’s Genera+ion and other programs coming to the sister networks.

No SVU Sundays for Winslet 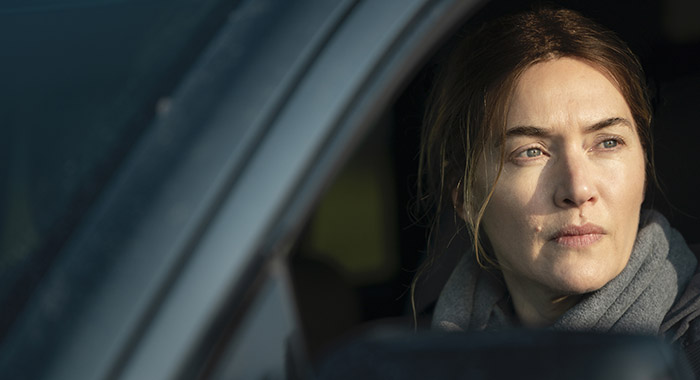 “I don’t think I have the mental stamina that is required,” Winslet said of being a detective, adding “But I think the one thing I did feel I had in common with Mare — that I, quite honestly, was able to lean on a lot — was that real sense of family and how much it means to her to hold that together at all costs. And also to be able to admit to herself from time to time that she has failed in a lot of areas and tries desperately to correct those errors and to hold everyone as close to her as she can, even if she’s a difficult person to live with from time to time.”

Winslet said she “actually deliberately didn’t” binge-watch any TV crime dramas to prepare for her role, although she did “watch a lot of real crime drama and a lot of YouTube footage.”

She also “spent some time working with real police department individuals in blacked-out vehicles driving around those areas in order to learn,” she explained, because “we really wanted to capture the essence of what it’s like to really be a detective from that town” since “it’s a place that really exist.”

She also tried to master the distinct accent of this part of Pennsylvania.

“The thing that was hardest for me, of course, was to do it well enough that you kind of shouldn’t hear the act of doing it,” she said. “I always hate that when you can hear someone doing a voice or doing an accent. And that’s one of the things for me that is more important than anything is just making it just disappear and blend in. So I did spend a long time working with a coach and working with people locally, as well. And it was up there amongst the hardest accents I’ve ever done.”

The series is from creator and writer Brad Ingelsby (The Way Back), with all episodes directed by Craig Zobel (The Leftovers).

Mare of Easttown will premiere Sunday, April 18 on HBO. 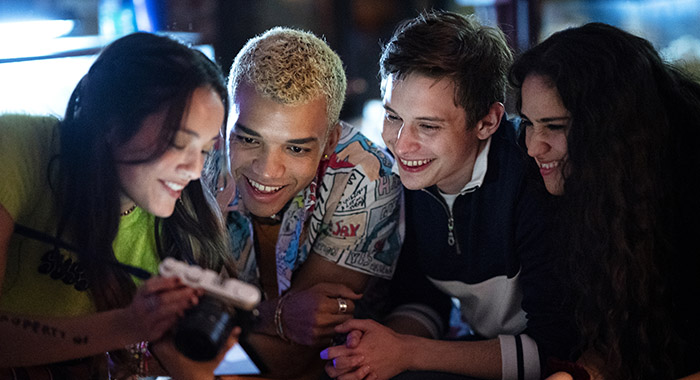 The latest in HBO and HBO Max’s line of pot-stirring TV series is Genera+ion. Created by teen Zelda Barnz and her dad, screenwriter Daniel Barnz, and follows a group of high schoolers who have frank conversations about race, sexuality, gender identity and more.

Starring younger actors like Justice Smith and Michael Johnston, it’s based loosely on people Zelda knew from her time in high school and she says “I think if you’re basing a show o ff something real and authentic, something that’s real and authentic is intersectionality and people who identify across the gender and sexuality spectrum and with different races and different ethnicities. And so I think it’s important to remember that they’re not just people who are straight and gay, there’s like a whole spectrum and all those identities deserve to be represented.”

Daniel Barnz tells the TCA journalists that Euphoria is “an incredible show and the craftsmanship in it is amazing,” but that “when you watch them, it’s just abundantly clear that they are different shows.”

“One of the most obvious differences is that Euphoria is an hour-long show and ours is a half-hour show,” he continues. “And that’s not just the time difference. You know, the real beauty and excitement of being able to work in that half-hour format is that there’s less pressure on story and you’re allowed to let your characters live and breathe and experience. And one of the things that Zelda’s always wanting us to do with the show is to reflect the actual experiences of teenagers which sometimes is kind of random or weird. And you go off on tangents and strange things happen, and we wanted to reflect that in the storytelling as well.”

Plus: In Treatment Revived, Jean Smart Comedy Is on the Horizon, Surfer Garrett McNamara Describes the Perfect Wave, and Alex Gibney Investigates The Crime of the Century

A new installment of HBO’s In Treatment premieres in May, this time with Uzo Aduba in the therapist’s chair instead of Gabriel Byrne. The story will take into consideration the current global pandemic as well as other cultural and political issues. An example? “There’s such a stigma attached to it, especially in communities of color, so it felt important to me, personally, to put that on television to show that we all need this,” executive producer Joshua Allen told journalists. The series also stars Anthony Ramos, Liza Colón-Zayas, John Benjamin Hickey, Quintessa Swindell, and Joel Kinnaman.

Jean Smart and Hannah Einbinder are starring in an as-yet-to-be-titled upcoming HBO Max comedy about a legendary Las Vegas comedian and her relationship with an entitled 25-year-old. Executive producers include Broad City’s Paul W. Downs (who also appears on the show) and Lucia Aniello and The Good Place’s Jen Statsky and Michael Schur. But is the show a send-up or homage of any performer in particular? “Every once in a while, there’ll be a scene or I’ll do something and I’ll think, ‘Oh, that kind of reminds me of so-and-so,'” Smart said. “I guess I borrow things from other comedians unconsciously, anywhere from Elayne Boosler to Phyllis Diller to Sam Kinison.”

The upcoming six-part surfing documentary for HBO, 100 Foot Wave, follows surfing pioneer Garrett McNamara and his quest to find the largest wave. But what is the perfect wave? “A perfect wave, for most surfers, has a really good barrel on it. So you come down the wave and instead of running 11 in front of the wave away from it, you wait for it to cave over you. You’re either running full speed and it passes you, or you wait until the last second and turn under it,” McNamara said.

Alex Gibney’s upcoming two-part HBO documentary, The Crime of the Century, looks at the opioid crisis. And while there are definitely similarities between the prevalence of this drug and the history of Big Tobacco, source Anna Lembke, the medical director of addiction medicine at Stanford University, explained that “tobacco never pretended that they were selling medicine that would actually make you better; whereas, [for] the opioid industry, that was their winning ticket.”

Tina, an intimate look at the life and career of musical icon Tina Turner from HBO Documentary Films, premieres on March 27.

Animated series in development include cat tale Hello Paul; Obi, an adaptation of Obi Arisukwu’s Instagram comic strip about a man-child pursuing a career as an artist; Uncanny Valley about three awkward domestic helper robots who kill their human owners and try to assume their identities; and comic book adaptation Cover, an animated espionage thriller from Brian Michael Bendis and David Mack.