Despite his extraordinary career, The Conners and Righteous Gemstones star somehow still comes across as a humble and beloved journeyman actor. Here's how he spins his unique appeal. 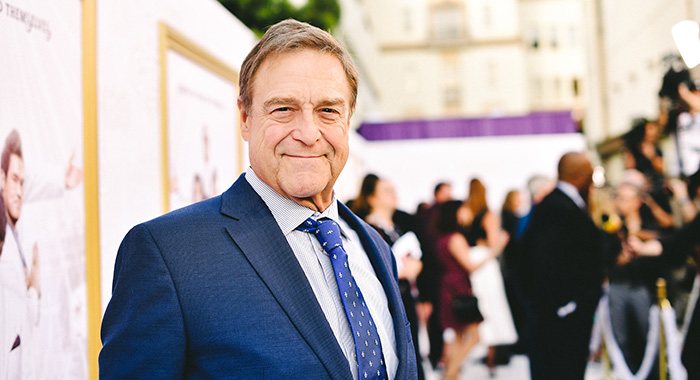 Are we in the middle of a John Goodman television renaissance? A Goodman-aissance? According to the actor, it’s a silly question.

“Oh for f—‘s sake,” Goodman says, laughing. “I don’t even want to think about that.”

But given his recent return to The Conners set for season 2 of the Roseanne spin-off series, and his stint as the patriarch in HBO’s new comedy The Righteous Gemstones, it does feel like he’s currently having a noteworthy moment in the spotlight.

It wasn’t something Goodman had planned. When Roseanne Barr was fired from the 2018 Roseanne reboot — which had reunited Goodman with his old friend and on-screen wife — the actor found himself overwhelmed and unemployed.

“At the time, I was in deeper shock about it than I even thought, and it was bad,” Goodman tells Rotten Tomatoes. “It had more to do with the Twitter world and social media. It just got really scary all of a sudden. And I thought I was handling it well, and then — just a lot of weird little things were going on with me. I got over it.”

Goodman visited Jimmy Kimmel Live in fall 2018 and shed light on some of those things: “My wife got sick after that. And then I fell down the stairs.”

“This is actually weird: I lost that job and, like, the day after, I got the call for Gemstones,” he explains. “I said, ‘Well, I’m not doing anything!’ And so I took that, and then [The Conners] came back. A lot of weird things happened.”

It feels like Dan Conner and Eli Gemstone couldn’t be more different, yet grief seems to be a commonality between both characters; Dan lost Roseanne to an opiate overdose, though the death of Eli’s wife, Aimee-Leigh (Jennifer Nettles), has yet to be explained.

Jumping from the working-class contractor that made Goodman a household name to the privileged wealthy leader of the Gemstone family’s megachurch wasn’t that much of a stretch for the actor. But for McBride, adding the beloved actor to the cast of his HBO series felt more like a pipe dream than an achievable reality. 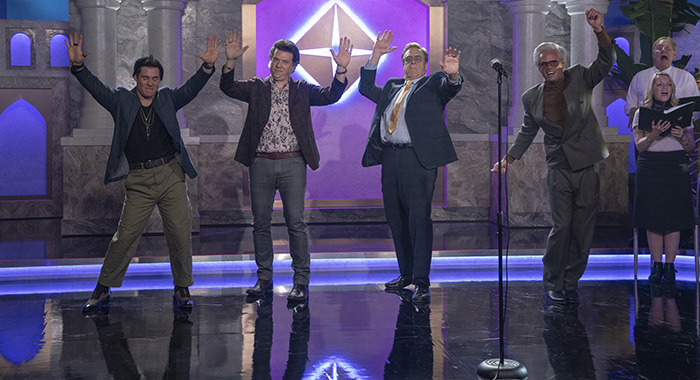 “I just never imagined that he would be interested in something I would be doing,” The Righteous Gemstones creator and star tells Rotten Tomatoes. “And so when we sent him the script, and he called back, I think, the next day and said he was interested, we were just blown away.”

Was Goodman always on McBride’s mind to play Eli? Well, no. According to the Gemstones creator, picturing actors in the different roles he creates is never a part of his storytelling process. That comes much later. When those conversations happened and Goodman was suggested by casting directors Sharon Bialy and Sherry Thomas, McBride was energized by the notion.

And when Goodman said yes, the whole thing really came together.

“I couldn’t imagine anyone better for this,” McBride says. “He’s just an actor that I’ve always admired. And he’s my favorite kind of actor. He has the same ability as, you know, what I love about Walton Goggins, which is: I love it when someone can make me laugh, but I love it more when they can make me feel something and they can pull my heartstrings.” 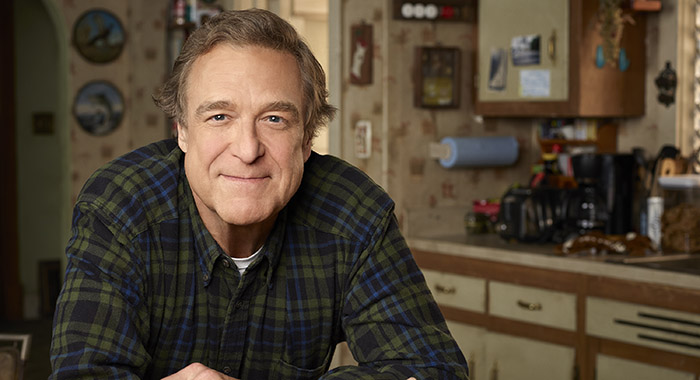 Delivering the comedy and plucking the heartstrings is something Goodman does so well, in fact, that it feels a bit effortless when you watch the man work — whether it’s on premium cable or in a primetime sitcom. For his work on The Conners, Goodman admits most of the acting work he’s been doing recently is reacting.

“I think to my guy, it’s just kind of one damn thing after another, you know?” he says.

After a thoughtful pause, he continues, “I think the challenge for [Dan] is just keeping up with everything and trying to stay on top as best he can. Right now, it just feels like he’s treading water. But that’s the way he’s felt his whole life. Things just happen.”

Things just happen, life just happens. It sounds simple enough, but Goodman is downplaying his talent here. As humble as the actor is, there’s no denying his ability to take on the complexities of the human condition and do so with effortless flair.

“Mainly, I just study him,” Sara Gilbert reveals. “He’s like a humanizing machine. The words come out more real and different than you would ever expect. There is some part of me that believes Dan Conner is absolutely a real person.” 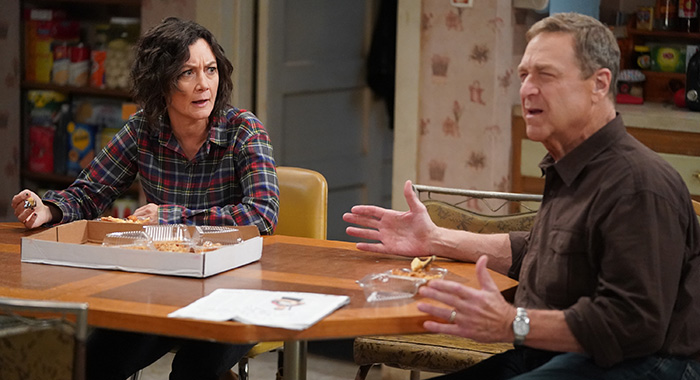 Gilbert has played Darlene, the middle Conner child, for 12 years, collectively. First, during the show’s original run, from 1988 to 1997. And then, like the rest of the core cast, she reprised her role for 2018’s Roseanne revival. Barr may be gone from the show, but the Conners family legacy lives on.

“It’s quite magical that after all these years, the relationship is the relationship,” Gilbert says. “If anything, maybe Darlene challenges her dad a bit more as an equal. Their ideas clash and we get to fight it out more than I remember doing as a child.”

In the upcoming season of the ABC sitcom, a new addition to the Conner family switches things up a bit. Will the loss of Roseanne still be in the tapestry of the show? From the sound of it, her absence will always be felt. But with pregnant Becky about to give Dan a new grandchild, the character can’t dwell on the past.

“There’s not much time to reflect because of the changing relationships,” Goodman says, “and the changing family dynamics with the kids living at home, now. It’s just one damn thing after another, so you have to keep up. And just keep earning a living.” 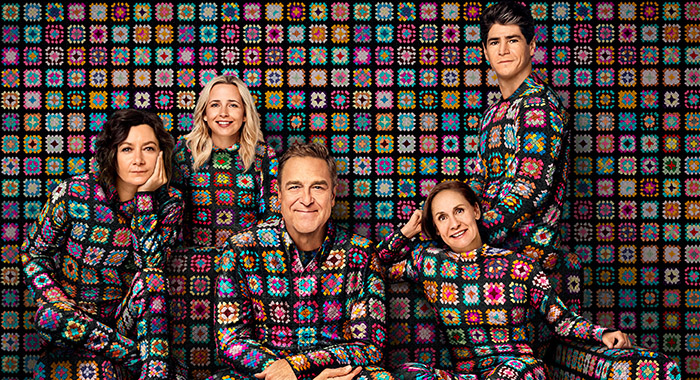 With just a three-week gap between the wrapping of Gemstones season 1 and the start of production on The Conners, Goodman’s schedule has become quite busy. Just last month, Disney+ announced a new animated sequel series to Monsters Inc., titled Monsters At Work, which will find Goodman reprising his role as beloved monster Sully.

“Oh, yeah! I forgot about that,” he laughs. “I don’t know if I’m done with it or not. I haven’t heard from them lately.”

Friends, fans, colleagues, and industry observers have no problem remembering the Golden Globe– and Emmy–award winning actor’s accomplishments, including his roles in blockbuster fare like the Monsters and Transformers franchises, Kong: Skull Island, 10 Cloverfield Lane; in Joel and Ethan Coen’s Barton Fink, The Big Lebowski, Inside Llewyn Davis, and O Brother, Where Art Thou?; on Roseanne, of course, but also in TV series The West Wing, Treme, and Damages; and, with 13 appearances, as the third-most frequent host of Saturday Night Live (behind Alec Baldwin at No. 1 and Steve Martin at No. 2).

“[John Goodman] was doing television before being on TV was cool,” McBride says. “Back then, it was like if somebody was on a famous sitcom, they weren’t in movies. And, you know, John was able to be in big movies, a big popular television show, and be able to be in arthouse films with the Coen brothers … He’s been able to do anything he wants. And he’s been around for a long time doing that, and it’s just really, really impressive.”

With all the projects Goodman is juggling, it shouldn’t be all that surprising that he’d space on one of Disney’s highly-anticipated new programs. It feels like the actor’s real-life strategy is not so different from his iconic small-screen persona: Just keep earning a living.

“You know, I’m just a guy with two jobs. I’m really lucky. And the two jobs I have are really great,” Goodman says before correcting himself. “Three jobs! I keep forgetting about Monsters At Work!”

The Righteous Gemstones airs on Sundays 10/9C at on HBO; The Conners season 2 debuts on Tuesday, September 24 at 8/7C on ABC; Monsters At Work is expected to be available the second year after Disney+ launches on November 12.