5 Reasons Jessica Jones Is the Superhero Everyone Needs Right Now

Krysten Ritter's superhero is a flawed, hard-drinking, plain-speaking abuse survivor – and yet she persists.

Marvel’s Jessica Jones is about to return for its second season on Thursday, and a lot has changed since its first season and Jessica’s (Krysten Ritter) struggle against Kilgrave (David Tennant). It seems following the success of inspiring film Wonder Woman and with the #MeToo and #TimesUp movements shifting the paradigms, people have felt empowered to identify their own personal Kilgrave and, as the saying goes, give him what for.

And even though Jessica was (seemingly) successful in her objective, portraying her struggle to process living after that victory sets her apart from so many other fictional heroes. With that in mind – and in honor of International Women’s Day on March 8 – here are five reasons Jessica Jones is the superhero we need right now.

1. She Lives in a Realer Superhuman World 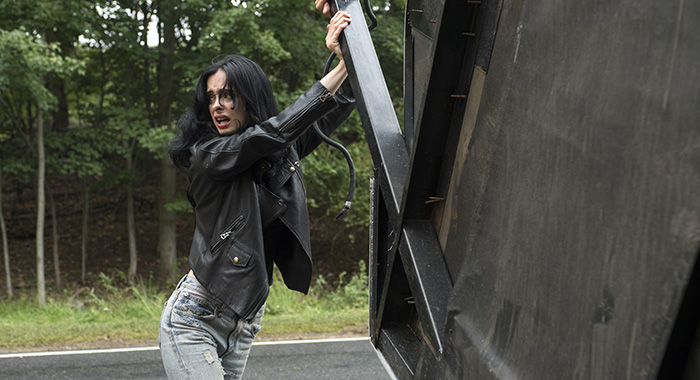 Sure, the Marvel Cinematic Universe is a place of aliens, mystical dimensions, and the Hulk, but the Netflix corner of that world is far closer to our own — right down to dismissing Marvel’s The Avengers’ Battle of New York as “The Incident.” And thanks to that street-level view — which is itself a Marvel Comics specialty going back decades — Jessica’s problems are familiar. She struggles to pay bills, stay sober, and face a very specific trauma. Her neighbors know about recovery and pain, and support groups freak her out as much as any ludicrous supervillain; in fact, talking in group may be even more of a challenge.

But the show (and showrunner Melissa Rosenberg) smartly rewrote the more outlandish parts of Jessica’s comic-book origins and ongoing struggles into a brutal interior conflict. The series also explicitly called out Kilgrave’s abuse as rape. And while the show still gives him a superpower, the direct mental abuse serves as a parallel for something people around the world deal with every day. The directness of the parallel stands alongside the pulpy plot progression of a comic book, giving it the necessary amount of distance to make it compelling television. While Jessica’s world looks like ours, it always has superhuman abilities to both tell a story of trauma and offer a cathartic punch to the villain’s face.

2. She Is Nowhere Near Perfect 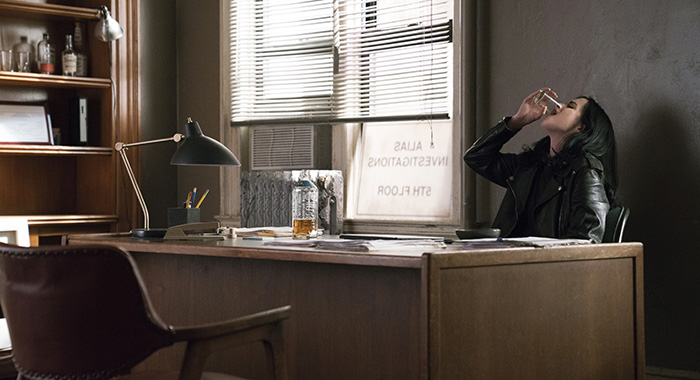 Of course, Jessica makes unhealthy choices when dealing with grief and trauma. As the series begins, she is rarely sober, gets into fights in the hallway outside of her apartment and uses sex as a way to avoid the really uncomfortable feelings — actions which have very specific parallels to the first few issues of Brian Michael Bendis and Michael Gaydos’s Alias comic book.

Other than Trish (Rachael Taylor), she tends to keep people at a blast radius thanks to her powerful wit and equally effective fists. And throughout the first season, we slowly discover most of this is to avoid dealing with the memories of Kilgrave (a story told at the latter end of the Bendis/Gaydos series). But we also learn Jessica’s reticence to engage with people goes deeper. Much of her attitude and paths to addiction were cemented well before her ill-fated attempt at superhero antics and meeting the Purple Man. Also, intimacy of all kinds give her pause, even if she made a good-faith attempt with Luke Cage (Mike Colter).

Like the crumbling apartment around her, Jessica cannot face the actual process of healing. But it makes her all the more compelling as we learn more about the traumas in her life and the ways she avoided dealing with them. Which, even if she directly dealt with Kilgrave last season, means she begins the second season still denying things and wavering on the path to recovery. 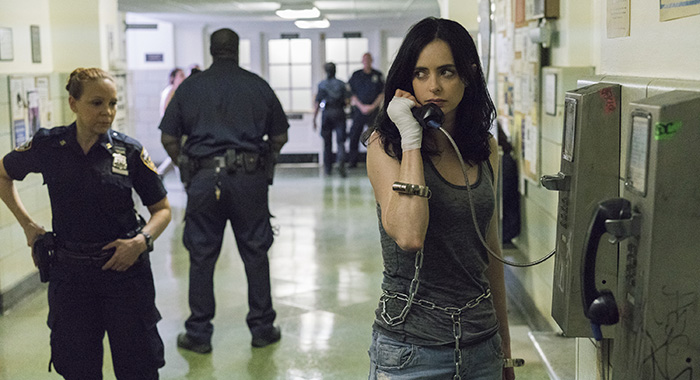 In moments of clarity — or, at least, now that she has survived one season of the show and that run-in with New York’s other local heroes in Marvel’s The Defenders — Jessica will admit to some version of her flaws herself. That awareness marks her as distinctly different from, say, a near-perfect God-killer from Themyscira or a lawyer from Hell’s Kitchen with bags full of denial. It took her nearly dying to get there, but understanding why she lashes out may save her in the end.

It also means she gets to enjoy things from time to time without the specter of denial hanging over her.

Having at least a partial understanding of her impulses means Jessica is in a place where that initial attempt to be a hero can grow into something stronger. For all the anxiety and distrust around her, Jessica is capable of channeling the call to heroics and present to the viewers that survival and recovery is possible. Which might seem like a small idea when compared to the Earth-shattering stakes in the Marvel film epics or even the threat of The Hand in The Defenders, but it is no less important.

4. She Forges Strong Bonds (Often in Spite of Her Stated Preference) 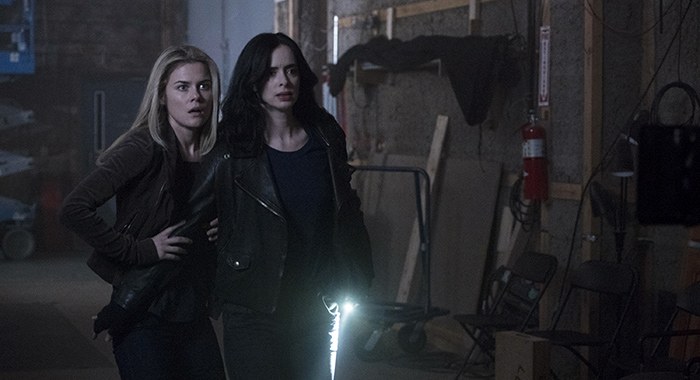 Also important is the example she sets for those who (consciously or not) isolate themselves. As mentioned earlier, Jessica’s life-long friendship with Trish is one of the best elements of the first year and one which will get a larger focus in the new season. They helped one another through various crises while growing up and continue to help each other out in large and small ways; even if Jessica has a habit of destroying Trish’s stuff. Jessica’s ability to help Trish deal with her mother is one example.

But Trish is not the only person who matters to Jessica. Malcolm (Eka Darville) is the sidekick she never asked for, but he is someone she cares about; even if she tries to convince him that she is the greatest threat to his well-being. Between helping him get clean and facing what Kilgrave did to him, the two have more in common than she will admit out loud. It makes them a surprising duo. Well, at least when she will let him into the office.

And like many facing a long recovery, Jessica still defaults to old patterns and tries to push these two away despite their stated commitment to her. Their continued efforts to be there for her suggests they see she has a good heart buried under so much pain.

5. She Is the Female Defender (Even If She Grouses About It) 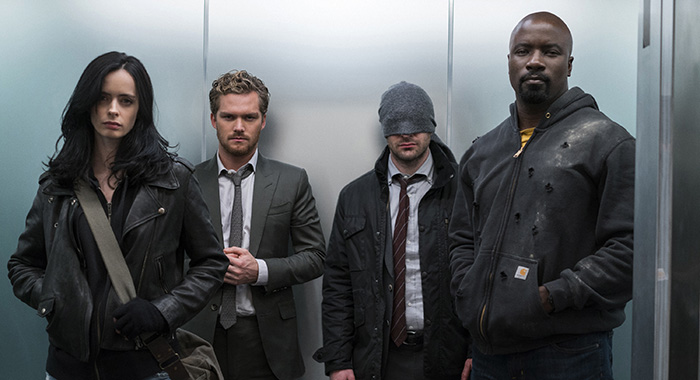 Thanks to the events of The Defenders, Jessica’s New York now understands the prevalence of super-powered individuals among them. Which means she faces a whole new slew of questions about her identity as the second season of the series begins. It also means she falls back on her favorite tactics to avoid those issues. Nonetheless, Jessica’s biggest question relates right back to the time she and Trish decided she should try to be a hero like those distant Avengers up in the sky.

Trauma is not exclusive to Jessica or her corner of Manhattan, but Jessica Jones is the rare program to view these issues from a woman’s perspective and bring the very nature of heroics into question. Sure, she has the powers, but the mental bandwidth required to face the pressures of being a superhero does not come as easy. To a certain extent, this makes her choice to get involved in The Defenders despite the escalating weirdness – and the fact The Hand never targeted her specifically – the most heroic of the four.

Now whether or not she is willing to make a choice to defend people like that again anytime soon will be a question for the new season as a serial killer stalks the superpowered community. Also, Trish’s investigation into the origin of her powers forces her to face the interior threat she’d rather drink to forget, but it once again makes Jessica the most humane of the television comic book heroes and the hero we need right now. 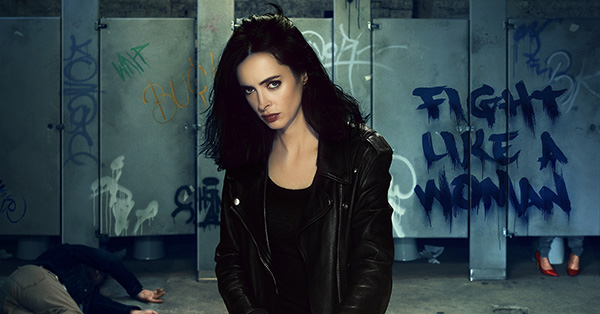 Find out what Ritter herself said about the topic in our interview with her, “Jessica Jones’ Krysten Ritter on Her ‘A–hole’ Character, #MeToo, and Missing Her Defenders Buddies.” 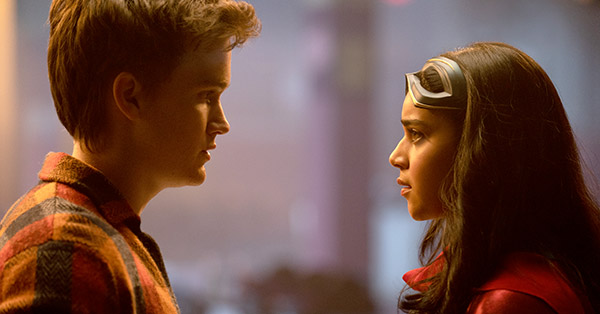