Critics say Jon M. Chu's musical is a huge leap forward for Broadway adaptations, and it's the perfect summer movie to welcome us back to theaters.

Summer is approaching, and cinematically speaking, there are plenty of places to go during these hotter months, but nothing seems like a better destination than In the Heights. Once you see the nearly unanimous rave reviews of the upcoming musical — directed by Jon M. Chu (Crazy Rich Asians) based on the Broadway smash by Lin-Manuel Miranda (Hamilton) — you’ll want to book this virtual trip to the Washington Heights neighborhood of New York City.

Here’s what critics are saying about In the Heights:

Is this THE movie to see this summer?

In the Heights is a knockout… This one deserves to be the film of the summer.
– Manuel Betancourt, That Shelf

In The Heights’ irrepressible energy is the perfect note on which to kick off this summer’s blockbuster season.
– Danette Chavez, AV Club

Every summer should have a movie like this one.
– Joshua Rivera, Polygon

In the Heights isn’t just a movie, it’s a movement.
– Matt Rodriguez, Shakefire

Could it even be the movie of the year?

There may not be a bigger cardiac rush this year than In the Heights.
– Leah Greenblatt, Entertainment Weekly

One of the best films of the year, In the Heights is a special experience.
– Adriana Gomez-Weston, We Live Entertainment

One of the best films of the year that is perfect in almost every way.
– Matt Rodriguez, Shakefire

It’s one of the liveliest and most moving films you’re likely to see this year.
– Siddhand Adlakha, IGN Movies 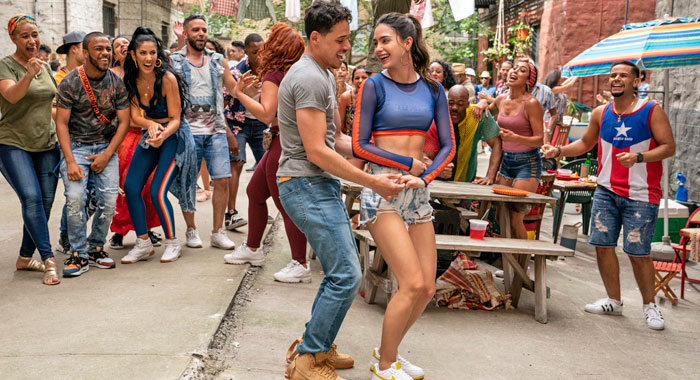 Will fans of the original Broadway production be happy with it?

Bursting with life, love and melody, it amplifies the mega-wattage of Lin-Manuel Miranda’s Broadway show, transforming it into a jubilant cinematic experience.
– Courtney Howard, Fresh Fiction

Chu’s vision expands and enriches the show’s rendering of Washington Heights into a moving spectacle, elevating mundane mornings or trips to the pool into something mesmerizing and exhilarating.
– Monica Castillo, The Wrap

It’s a musical adaptation that feels grand and intimate in equal measure; there’s plenty of pizzazz to go around but Chu knows just when to zero in on small details to make this effervescent musical sing.
– Manuel Betancourt, That Shelf

[It’s] a triumphant adaptation… In its joyous excess, In the Heights makes a case for adapting Broadway musicals into Hollywood cinema.
– Joshua Rivera, Polygon

What about fans of movie musicals in general?

In the Heights is proof that the movie musical isn’t dead — it simply needed a little flavor.
– Juan Barquin, The Film Stage

Even as it calls back great movie musicals both old and new, it also feels like a great leap forward for the genre.
– Manuel Betancourt, That Shelf

This is the very best of what a movie musical can be.
– Anna Menta, Decider

It’s exceptional and rapturous, as all great musicals should aspire to be.
– Courtney Howard, Fresh Fiction

It does what a great musical should do. It makes you feel alive.
– Siddhand Adlakha, IGN Movies 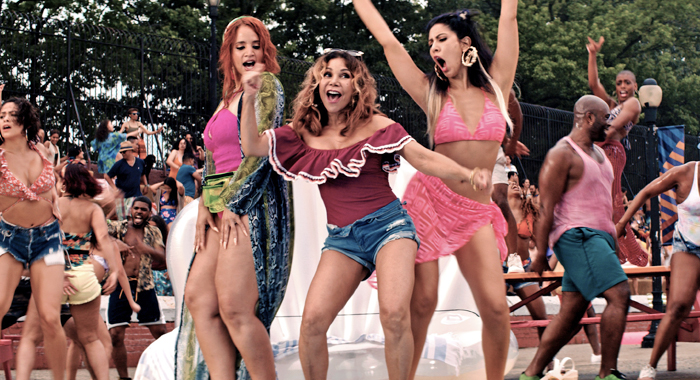 How are the musical numbers?

Each one feels impossibly more iconic than the one that came before it.
– Anna Menta, Decider

Almost all the songs are bangers that keep emotions high — you’ll weep, you’ll cheer, you’ll hum the songs to yourself on the way out of the theater.
– Jacob Oller, Paste Magazine

Although not perfect in execution, the musical numbers of this adaptation take characterization to new heights as they each respond to the popular music of the character’s country of origin.
– Orlando Maldonado, The Playlist

[Chu’]s end goal seems to be doing the mostest for each musical number, which doesn’t necessarily correspond to doing the bestest.
– Martin Tsai, Critic’s Notebook

How is Jon M. Chu’s direction?

In the Heights is the movie he was destined to make, and going forward, I hope to see Chu create more musicals for the ages.
– Alan Cerny, Vital Thrills

One exciting aspect of the whole experience is Chu’s vision on what a movie musical can be… [He] inherently understands that musicals are magical, no matter how “small” and realistic the plot.
– Erin Strecker, Mashable

Chu hits a lot more often than he misses, and always when it counts most.
– David Ehrlich, IndieWire

Mr. Chu’s abrupt transitions between naturalistic street scenes and the soundstage are characteristic of an inconsistent and incoherent style.
– Martin Tsai, Critic’s Notebook

While the spontaneity of the dance numbers ultimately works in Chu’s favor, the frequent close-ups do not, and it makes me wish he showed the potential for splashy musicals that he did in his Step Up movies.
– Hoai-Tran Bui, Slashfilm

At times, I found myself a little frustrated with Chu’s directing choices… I wanted to yell “HOLD STILL!” so I could see amazing performers — and they are all truly fantastic — do their thing.
– Alissa Wilkinson, Vox 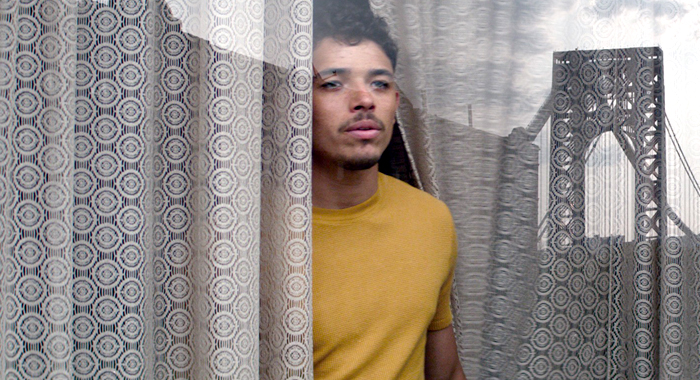 The cast is uniformly excellent, with special notice to Anthony Ramos whose charisma leaps off the screen.
– Travis Hopson, Punch Drunk Critics

One of the most charismatic and radiantly likable performances you’ll ever see on a screen of any kind, Anthony Ramos plays Usnavi as a naturalized storyteller with a twinkle in his eye.
– David Ehrlich, IndieWire

While the entire ensemble cast shines, the film is Merediz’s, and she’ll likely be in conversation during the coming award season.
– Adriana Gomez-Weston, We Live Entertainment

Does it have a message?

In The Heights’ timely story has a topical message that feels right at home in a musical setting… that’s reinvigorated by the way that Huedes adapts her own book into the realities of today.
– Mike Reyes, CinemaBlend

[It’s] a bit heavy-handed at times with its messaging.
– Juan Barquin, The Film Stage 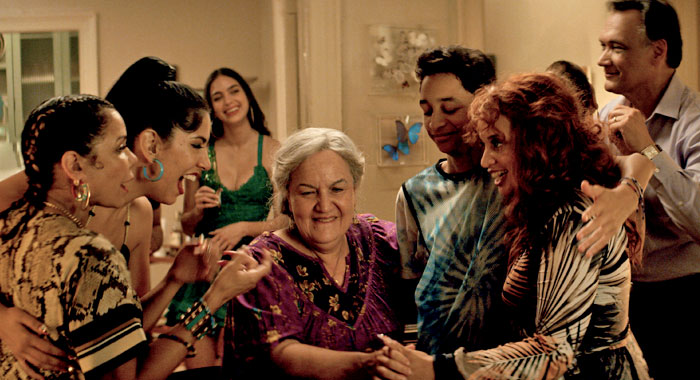 How important is the film’s Latinx representation?

What I love most about In the Heights is how Latino culture is represented front and center and is not just some afterthought saved for a scene or two.
– Matt Rodriguez, Shakefire

What makes the adaptation of In the Heights so remarkable is that it is a major Hollywood musical that allows its Latino characters to live normal lives, outside of gang or narco violence and outside of stereotypes.
– Monica Castillo, The Wrap

In the Heights pulls off the impossible as it accurately represents the Dominican, Cuban, Puerto Rican, and many other Latin diasporas in the United States.
– Orlando Maldonado, The Playlist

What’s most special about In the Heights is that it shines a light on an often overlooked community on film.
– Adriana Gomez-Weston, We Live Entertainment

The film ultimately comes off as a corporate vision of celebrating diversity.
– Martin Tsai, Critic’s Notebook

But is it also a movie for everyone?

Not everyone is going to feel represented when they watch In the Heights. That’s an impossible task for any movie. Yet [it] can represent many things for many different viewers.
– Monica Castillo, The Wrap

[It’s] a big Hollywood musical that’s not just for Latinx people, but for fans of Broadway, Hamilton, Lin-Manuel Miranda’s cult of personality, and musical theater in general. They’re going to flock to this film like it’s a hot new brunch spot in Crown Heights.
– Joshua Rivera, Polygon

Are there any problems with the movie?

Not all of the updates are seamless; some of the meaningful tension from the original is sacrificed for an unambiguously happy ending.
– Danette Chavez, AV Club

Hawkins isn’t charismatic enough to elevate a paper-thin character when placed against a star like Grace.
– Juan Barquin, The Film Stage

Not all character arcs are as strong as others, specifically when it comes to Vanessa’s. Her internal and external stakes aren’t brought together nearly as cohesively as her love interest’s.
– Courtney Howard, Fresh Fiction 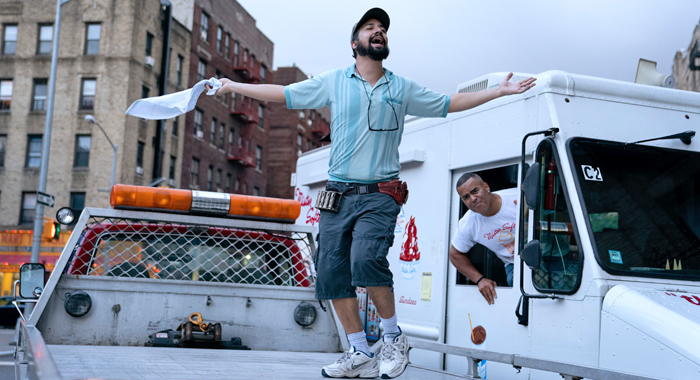 Should we see it on the big screen if we can?

Dreams like this, whether they be large or small, need a big screen to be truly seen; and In The Heights is absolutely worthy of being made into a big time moviegoing experience.
– Mike Reyes, CinemaBlend

Seeing this massive, guileless, heartfelt piece of Hollywood entertainment on the big screen is like coming home after a long year in exile only to find that it’s still there, and maybe even better than you remembered.
– David Ehrlich, IndieWire

See it with a crowd that will applaud every song and show-stopping dance number.
– Mike Ryan, Uproxx

[It] couldn’t come at a better time and absolutely must be seen in a theater… The experience is absolutely euphoric, and should be seen surrounded by as many friends and family as one can gather.
– Travis Hopson, Punch Drunk Critics

In the Heights is a stunning, triumphant return to the cinema that reminds us again and again and again why we love seeing movies on the big screen, together.
– Jacob Oller, Paste Magazine

Will we want to see it again and again?

When the credits rolled on Jon M. Chu’s joyous, colorful, pulse-pounding, and hopeful In the Heights, all I could think of was how badly I wanted them to restart the film.
– Travis Hopson, Punch Drunk Critics

In the Heights was the last film I caught inside of a movie theater in 2020. I have not stepped foot in one since that advance press screening last spring… There is no film I am more eager to watch amidst an audience than this ode to the beauty of crowds, to the value of solidarity, and to the pleasures of community.
– Manuel Betancourt, That Shelf

In the Heights releases in theaters and premieres on HBO Max on June 11, 2021.