Edge of Tomorrow and The Bourne Identity director debuts a new sci-fi drama series based on the same book series as his film Jumper.


Filmmaker Doug Liman, who wowed audiences with high-octane action films The Bourne Identity, Mr. and Mrs. Smith, and Edge of Tomorrow, is equally admired for the storytelling behind his spectacle and in his more moderately paced fare like Swingers, Go, and American Made.

His latest offering, YouTube Premium series Impulse, marries both in a drama that explores personal discovery, trauma, and family bonds. And teleportation.

Maddie Hasson (Twisted) stars as delinquent teen Henrietta Cole in the sci-fi series. When Henry is assaulted by her classmate Clay Boone (Tanner Stine), her deepest instincts kick in, and she flees by inadvertently bending space and time in a violent blink, landing in her bedroom. 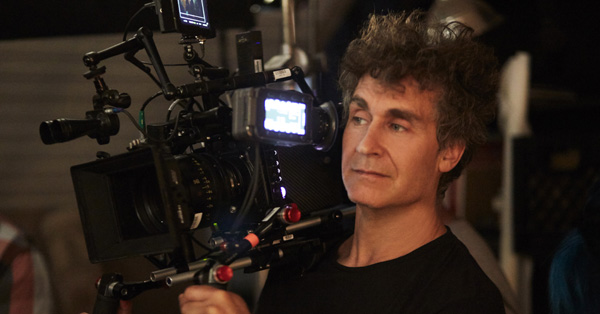 Discovering your superpowers is never an easy journey — ask Peter Parker or Clark Kent. But Henry’s path is even darker and more visceral than some of those fumbling-adolescent tales.

Based on the novel by Stephen Gould, Impulse comes after Liman’s 2008 feature film Jumper, based on the first book in the series and starring Hayden Christensen and Jamie Bell. The film disappointed, which Liman admits, but 10-episode Impulse is different in some fundamental ways.

Rotten Tomatoes spoke to Liman about the new series, his remarkable leading lady, and how he finds inspiration in real-world action sequences YouTube users post. 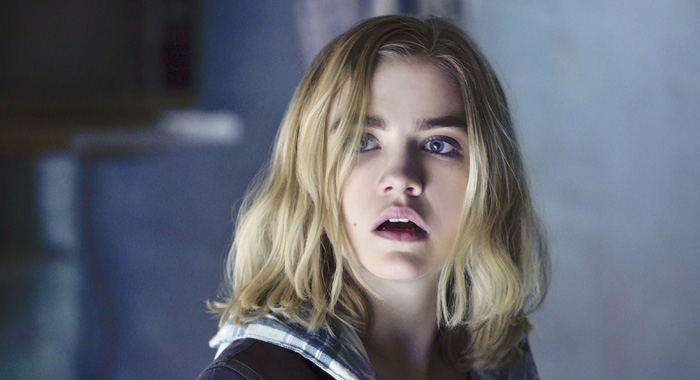 Debbie Day for Rotten Tomatoes: I’m so glad to talk to you about Impulse. It was not quite what I was expecting.

Doug Liman: Good. That’s the best. I’d much prefer to hear that than the other.

RT: I was most surprised by Maddie’s performance. She’s incredible. Could you tell me about casting her?

Liman: We were holding auditions for the protagonist, the heroine, Henry. Maddie came in and just lit up the room. We all turned to each other and said, “She’s a huge star.” I said, “Too bad she’s not right for the part.” My producing partner said, “But she’s so amazing.” I said, “Yeah, she’s amazing, but she’s the opposite of what we’re looking for.” I said, “If I cast her, I really would insist on rewriting the whole show to make the protagonist somebody who doesn’t want to be there, who is rebellious, who is — I’d want to change how the superpower is portrayed in the show.” Because the original idea is somebody who desperately wants to belong and be part of the town, and her superpower keeps sending her away. I said, “If we cast her, I’d want to turn it on its head and rewrite the whole script and make it about somebody who doesn’t want to be there and gets the power that keeps sending her back home. She wants to be anywhere but home.” As I’m saying it out loud, we’re looking at each other. We’re going, “You know, actually, that would be a better show.” We cast her and then reconceived the whole show around her and what she brought. 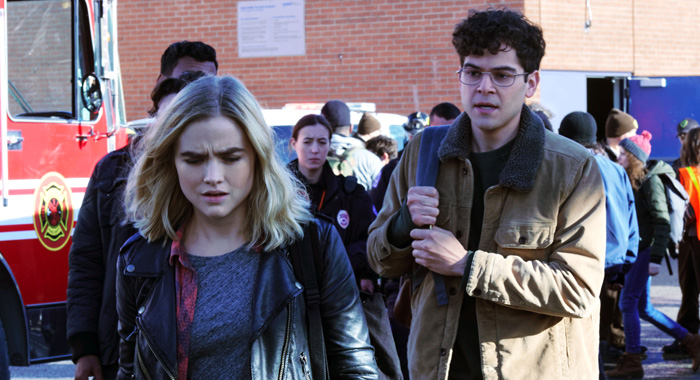 RT: It’s not too often that you hear about an actor having such an impact on an entire story.

Liman: I’ve always believed in some level of workshopping the part to fit the actor. It’s a two-way street. Sometimes my favorite performances, you realize those couldn’t have been just written in vacuum. They had to have been conceived in conjunction with the actor performing it. Certainly, that’s been my experience. Jason Bourne is a very different character because of the workshopping that Matt [Damon] and I did than was originally on the page.

Never have I done such a wholesale reconceiving of the DNA of a show around one actor. Literally. It changed how I portrayed the superpower, because then suddenly it was going to be a curse. Instead of sending her out into the world, it was going to keep sending her home. It was just way more interesting. That’s what a great collaboration between a filmmaker and a star can do.

You arrive at something really unexpected. That’s why when you said, “It wasn’t what I expected” — I don’t care if you hated it or loved it. I actually do care, because I really care about my audience, but I care most that it was not expected. What I’m aiming for as a filmmaker is unexpected and entertaining, because a lot of times, it’s unexpected. You’re like, “Yeah, it was unexpected, but the expected is better.” Clichés are clichés for a reason because they work. Any time you deviate from the cliché, yeah, you give the audience unexpected, but sometimes you have to work extra hard to deliver unexpected and great.

RT: Can you tell me about the dotted line between Jumper and Impulse, how the show came about, and what its ties are to the film?

Liman: It’s no secret that, of all my films, Jumper‘s the one that I harbor some creative regrets, feel like I could have done better. That’s something that’s hung over me. It dawned on me that rather than live with that regret, why not actually just go and try to do better? I went to secure the rights to a sequel novel. All these years later, with everything I’ve learned, I set out to create a superhero world that is unexpected, smart, grounded, exciting. Even despite all that, I still didn’t figure it out until I cast Maddie Hasson. Despite having all these big illusions about, “Yeah, I can do better,” the reality was until I cast Maddie, what I was going to make probably wasn’t going to be substantially better. It was that collaboration that was the missing ingredient for me. If you look back at my movies, it’s just that I’ve been fortunate to collaborate with exactly the right person.

Swingers: Only Vince Vaughn can make the character of Trent appealing. In anyone else’s hands, he just would have been an asshole. Only Matt Damon could really make you root for Jason Bourne despite his really dark past. That to me is the connection.

The other thing is that because it has been done independently, there were certain restrictions on me because it’s not done by the same people who did Jumper. It made people a little nervous that I’m the same filmmaker and that maybe I would inadvertently copy something I did in Jumper and infringe upon Fox’s copyright on the movie. It actually put me in exactly the situation I wanted to be in, which was people around me saying, “Push yourself and do something different and unexpected.”

Just look at how we portray teleportation between the movie and the series, because that was one of the things where I was told, “You can’t make it look like it looks in the movie.” My response to that was to come up with something that is so much more interesting, which is that it’s destructive to the people around you. As a result of that, the first time she teleports, she gravely wounds Clay Boone, the star of the high school basketball team. Suddenly, you have that story line running through the series that she can hurt people with this power. It makes sense that any time you’re learning to do anything, you’re kind of sloppy. Why wouldn’t the first time you teleport, why wouldn’t it be sloppy? 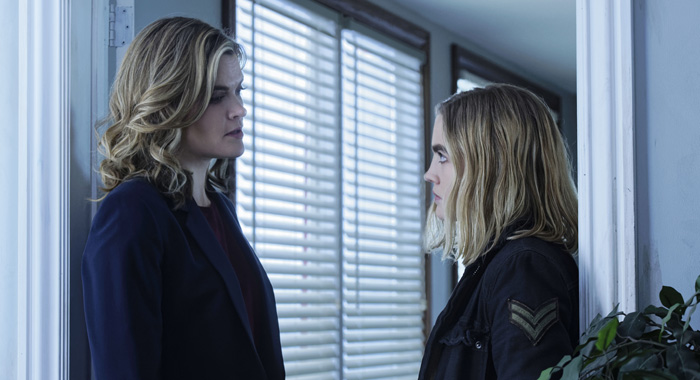 RT: When I got to the very last episode of the season, I honestly had the response, “Is that it?” because I wanted to see more immediately.

Liman: So do I, especially in the hands of writer Lauren LeFranc, because I directed the pilot. As I said, when we cast Maddie, we had a looming start date to start shooting. I wanted to reconceive the show and brought in Gary Spinelli, who wrote American Made, who’d never worked in television before, to be in the trenches with me, because we’re reconceiving basically as we’re prepping to shoot. Lauren LeFranc came in to write the series. What was amazing about her is that scripts would come in, and I’d get to the end of the script and be like, “Oh my god. I can’t wait for the next script. I can’t wait to see what happens.” In that case, I had to wait a few weeks because they had to write it.

RT: How did YouTube come to be the show’s home?

Liman: I casually mentioned it to [YouTube Global Head of Original Programming] Susanne Daniels that I’d recently gotten the rights to the book and wanted to develop it as a TV series. Susanne said, “We’re starting a new channel here. We’ll buy it.” I wasn’t even pitching it. It was just like, “Uh,” because normally when I sell a TV show, it’s a whole process with a writer, and pitch out a whole season. This was one of these crazy situations where she said, “You, this world, we’re in.” I called my producing partner, and I was like, “I think I just sold a TV show without — I didn’t mean to.”

Then I thought, “OK, do we want to sell it to YouTube?” I hadn’t gone anywhere else yet. When I talk about myself in interviews, I often talk about myself as being the independent filmmaker in the studio system. There’s no question I’m in the studio system. I live in New York, but I make Hollywood movies. I make commercial TV shows, but I bring an independent ethos to it, kind of a rebellious independent film ethos. Sometimes, I even bring independent film techniques to filming, and run and steal shots. My characters are more anti-heroic than your traditional Hollywood fare. My worlds tend to be a little more grounded — even when they’re high-concept, whether the world’s more grounded or the characters are more grounded, certainly they’re flawed.

When I thought about Impulse, I thought, “At YouTube? It makes perfect sense that I go make something at YouTube, because YouTube is nothing but independent filmmakers.” In fact, all of the qualities that YouTube stands for are qualities that I myself as a filmmaker have stood for. I’ve even started referencing YouTube when it comes to my movies; for instance, with action sequences, my new benchmark isn’t what are competing movies doing, but what’s on YouTube because people are doing stunts for real and filming them. I’m like, that’s who we’re competing against. We’re not competing against some CG, computer-generated, clearly fake piece of action in a Marvel film. My style of filmmaking, I’m competing against someone who did some outrageous daredevil stunt on YouTube and filmed it and put it up on YouTube. I want to do something with my films and my action sequences that is equally engaging.