How to Pick a Good Rom-Com Based on Its Poster

Are there characters standing back-to-back? Are they sitting? Are there more than three people? Is there a giant head? We'll tell you which ones to avoid.

Without any major romantic comedy releases dropping in theaters this year for Valentine’s Day, you might find yourself trying to pick the perfect rom-com on your favorite streaming services and apps. On one hand, it’s wonderful that there are so many choices. However, that paradox of choice could also leave you browsing for hours without ever picking a film, as the sheer number of options can result in decision paralysis (it’s a first-world problem, but it’s real). That’s how you end up scrolling through titles until you watch Always Be My Maybe for the 117th time (which isn’t a bad thing, because it features Randall Park singing about punching Keanu Reeves).

In an effort to make your decision a little easier, we analyzed 428 rom-com posters and, based on patterns we discovered, placed them into nine categories. We then figured out each category’s Tomatometer and Audience Score averages, then ranked them from worst to best. This way, the next time you’re in the mood for a romantic comedy, and you see characters back-to-back on the poster, or a collage of faces, or a heavily photoshopped image of two people looking at each other — or somewhere else entirely — you’ll know if the movie is likely to be worth your time. Read on to see what we discovered!

9. Posters with One Character Standing in Front of Another 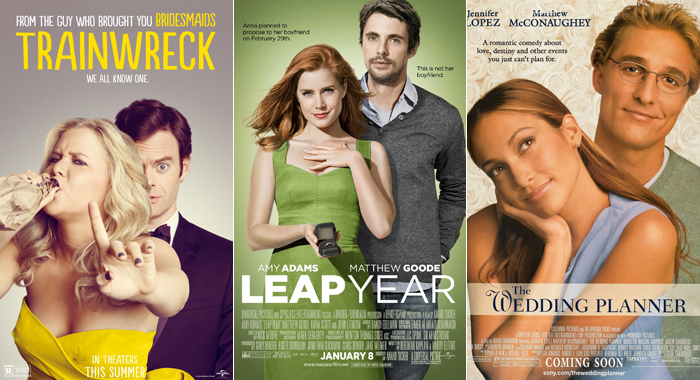 After sorting through decades of rom-com posters and becoming familiar with their eccentricities and similar themes, it was always obvious that this motif was arguably the laziest. You just get the feeling that a marketing department intern slapped some publicity stills on the poster, then went to lunch. While Waitress or Trainwreck are the complete opposite of trainwrecks, others such as When in Rome, The Wedding Planner, and Leap Year photoshopped in their A-list actors, and the end result says very little about the movies they represent. It makes you wish that in an alternate reality there is a Leap Year poster that features Amy Adams leaping in the air while she’s holding Matthew Goode in her arms (see category below).

8. Posters with Characters Back-to-Back, Leaning on Each Other, or Being Picked up 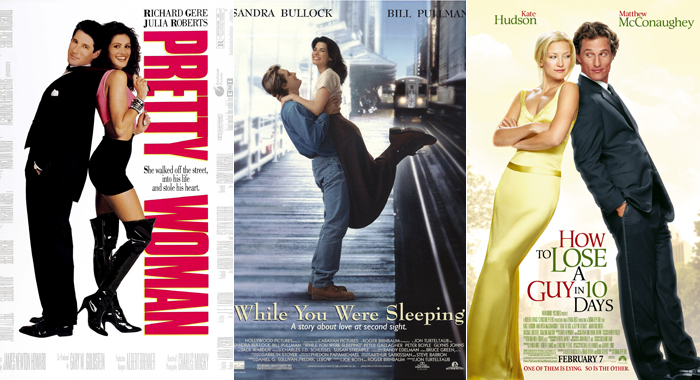 While these types of posters may come across as dynamic and dangerous (leaning = falling, picking someone up = bad back), they typically signify a Rotten result. Maybe it’s that the back-to-back visual makes us think that the two characters are about to engage in a Hamilton-esque duel. All we know is that of all these posters, only While You Were Sleeping could muster a Tomatometer score above 80%, while 23 of the 31 posters in the group were Rotten. We have No Reservations pointing out The Ugly Truth that these posters make us want to give these films Two Weeks Notice. However, if you are looking for diamonds in the rough, we recommend Brown Sugar (we still don’t know what Taye Diggs is doing with Sanaa Lathan’s leg though) or How to Lose a Guy in 10 Days, which at least showcases Kate Hudson’s iconic dress.

7. Posters with Characters Not Looking Directly at Each Other 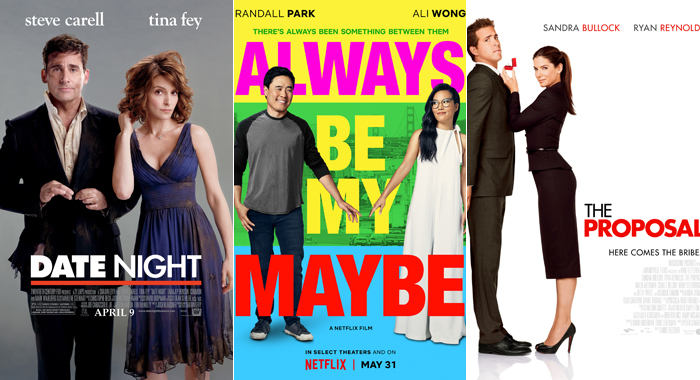 This category could be considered a cousin to Posters with One Character Standing in Front of Another; here, the characters are standing next to each other, and that seems to make a world of difference. That said, these characters aren’t looking at one another; they are either staring off into the distance, presumably laughing at a funny joke, or looking rather pleased with themselves, sometimes with their arms crossed. The 52.35% average is Fresh-adjacent, so proceed with caution, as you could pick winners like Always Be My Maybe or The Proposal, or you could be stuck with Good Luck Chuck or The Pallbearer.

Random Pro Tip: Look for the posters where there’s some contact between the characters. For instance, popular Fresh films such as Dave, Plus One, and Date Night actually make an attempt to portray couples who appear to like each other, and that generally seems to reflect in the Tomatometer score.

6. Posters with Three Characters on Them 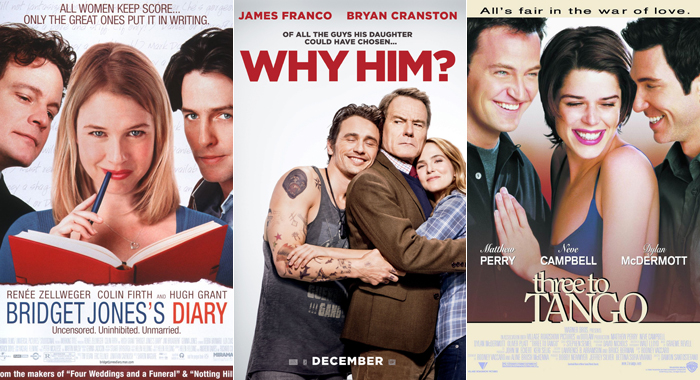 The nice thing about these posters is they immediately clue you into what kind of movie you’ll be watching. The three people signify either a love triangle or a meddling parent (Think Monster-In-law or Why Him?) who will provide comedic drama. Who will be picked? Will the meddling parent get over themselves? Will Hugh Grant and Colin Firth engage in another spectacular fight? The 52.8% Tomatometer average means these films trend towards decent, but be careful when deciding, because you could either pick wonderful films like The Half of It (watch it now) and Broadcast News (watch it immediately after The Half of It), or be stuck with My Best Friend’s Girl or My Boss’s Daughter.

Random Pro Tip: Avoid the films with pronouns like Me (You, Me and Dupree), I (I Think I Love My Life), Her (Over Her Head Body) and My (My Boss’s Daughter) in their titles. The majority of these are Rotten.

5. Posters with Four or More Characters on Them 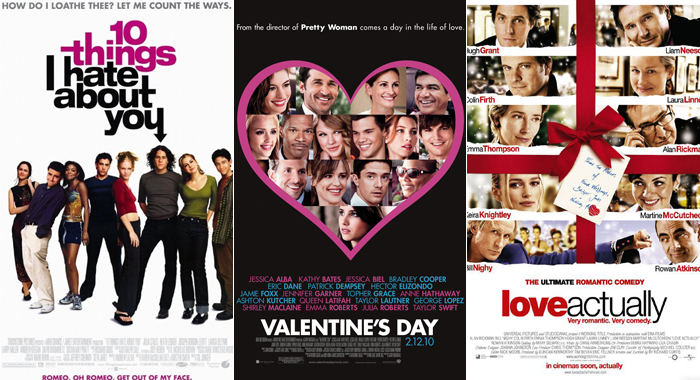 These posters showcase that the movie will be an ensemble piece by utilizing collages, tiers, or wide shots of several actors. Also, after looking through as many posters as we did, you’ll notice a trend that there is a central couple, and surrounding them are likable supporting characters. This is a marketing tactic to tell viewers, “Hey, if you don’t like the central couple, we have some other fun people who pop up occasionally.” That’s always reassuring, since there’s no guarantee you’ll enjoy spending time with the primary lovebirds, and those side characters can often make or break a movie like that.

4. Posters with Two Characters and At Least One Giant Face 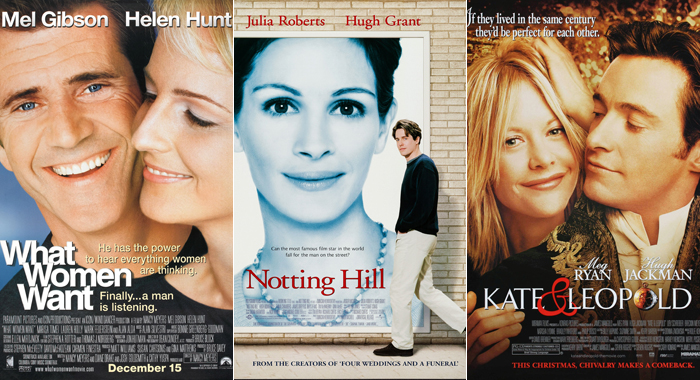 These posters are concerned with showcasing the mugs of your favorite actors and letting you know that big stars are in the film. By inserting at least one massive face on a poster, studios are banking on you recognizing it and thinking, “I know that famous person.” It’s a smart move, and films like Notting Hill, What Women Want, The Silver Linings Playbook, and Kate & Leopold all took advantage of the tactic, but once you get those casual moviegoers into the theater, you’ve got to deliver. As it turns out, these films did, more often than not, ensuring that the big bucks the studios paid for their marquee stars were well spent. 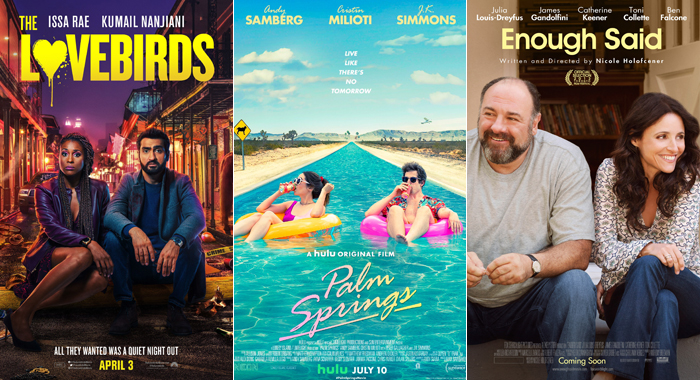 With Palm Springs, Enough Said, About a Boy, Sleeping With Other People, Manhattan, Singles, and The Lovebirds in this category, it’s easy to understand why it’s Fresh overall. These films include “hip” romantic comedies, or slightly offbeat films that occasionally stray from the formula. The visual of two people sitting down suggests some intimacy and, depending on the backdrop, communicate a lot about the circumstances of the central relationship. It’s a shorthand that works, and the movies that employ it are, on the whole, pretty solid.

2. Posters with Two Characters Looking at Each Other 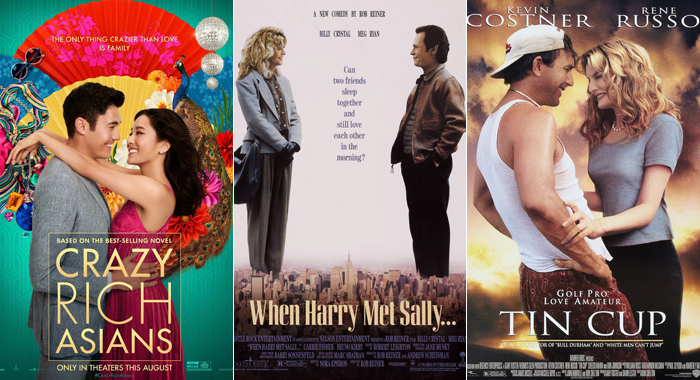 It would seem like a no-brainer that movie posters featuring characters looking into each other’s eyes have a Fresh Tomatometer average. The posters for Crazy Rich Asians, Shakespeare in Love, When Harry Met Sally, and Sleepless in Seattle are all designed this way, and those films’ reputations obviously speak for themselves. There’s an intimacy to this pose, which suggests the characters like each other (or will like each other after a chase through an airport). Movies like The Bounty Hunter, Fool’s Gold, Gigli, and Blended bring the score down, but at least they feature Jennifer Anniston, Kate Hudson, Jennifer Lopez, and Drew Barrymore, which helps make them watchable to an extent.

1. Posters with Only One Character 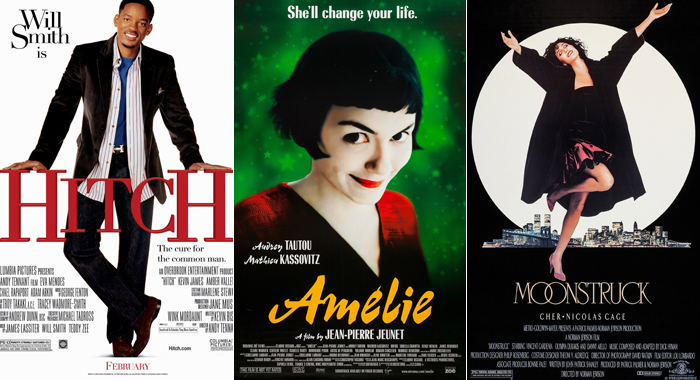 It may seem counterintuitive, but rom-com posters with only one person on the poster have the highest Tomatometer and Audience Score average. This includes movies like Moonstruck, Amelie, Under the Tuscan Sun, Knocked Up, The 40-Year Old Virgin, Easy A, There’s Something About Mary, and Hitch, which all proudly showcase their A-list leads proudly. Not unlike the giant face posters (with two or more people), these posters want you to know who is the star of the film and have no problem ignoring every other member of the cast.

These posters clearly show confidence in the leads. They’re basically the equivalent of Babe Ruth calling his shot before he smashed the baseball out of the park in the 1932 World Series. These posters say “Emma Stone will change your life in Easy A”, or “Cher’s performance in Moonstruck will bowl you over.” There’s confidence and swagger in having Seth Rogen’s head take up 97% of the Knocked Up movie poster, but the film ultimately pulled in $220 million at the worldwide box office. Even Rotten movies like Sweet Home Alabama, Boomerang and 27 Dresses, were big hits that easily cleared $100 million domestically. In other words, putting one person on a rom-com poster is daring, inspired, and, more often than not, a successful marketing ploy.

There you have it! Rom-com posters featuring only one character have the highest Tomatometer and Audience Score averages. Hopefully this will help you in the future when you’re looking for something to watch. Enjoy!