Seven things to know about the series from the show's creator: adapting Christopher Pike's work has been a life-long dream, it's a YA genre title, what he hopes for the future of the series, it brings a member of "horror royalty" back to acting, and more.

Mike Flanagan’s latest spooky Netflix endeavor is The Midnight Club, the television adaptation of author Christopher Pike’s book of the same name. The 10-episode first season is now streaming and follows a group of terminally ill teenagers who meet every night to tell each other scary stories as a way of confronting life’s issues and their own mortality.

The program officially charts a new course for the famed genre filmmaker as the project marks the first foray into the realm of YA entertainment by Intrepid Pictures, the production company he runs with long-time producing partner Trevor Macy. 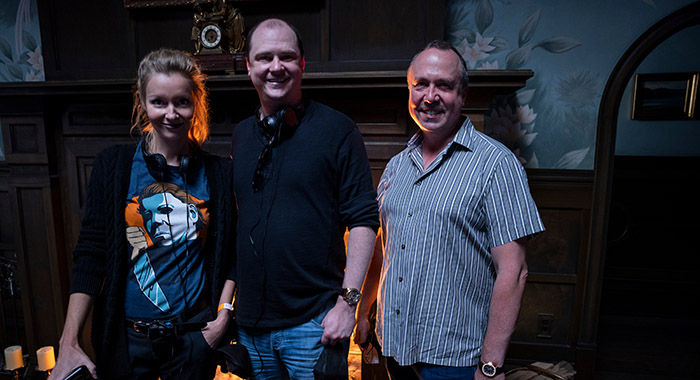 Flanagan and Macy (pictured above center and right, respectively, with director Axelle Carolyn) have built an impressive slate of programming for Netflix in recent years, including the likes of gothic horror shows The Haunting of Hill House, The Haunting of Bly Manor, and, most recently, in 2021’s Midnight Mass. But for Flanagan — who turned to his 11-year-old son Rigby for creative input on his latest — tapping into Pike’s work isn’t just a creative pivot for him, but it’s also a life-long dream come true, as the co-creator of the series explained during a press breakfast at Netflix’s New York offices during New York Comic Con.

Throughout the hour-long conversation about the new adaptation, Flanagan delved into his deep affinity for Christopher Pike’s work, teased his future hopes for the series, discussed A Nightmare on Elm Street horror icon Heather Langenkamp’s return to acting, and hinted at the Easter eggs fans may see sprinkled throughout the episodes.

Here are seven things you should know about The Midnight Club:

1. Mike Flanagan has wanted to adapt The Midnight Club for decades.

“This for me goes back into into my childhood,” Flanagan told reporters.

Looking through Mike Flanagan’s work, it’s easy to see the common thematic threads of death, grief, and how such loss informs the greater human experience. But, as he explained, it was Christopher Pike’s books that first revealed the emotional power of storytelling to his young mind.

“I just consumed everything that he wrote,” he continued. “There was one book in particular called The Midnight Club that made me cry as a teenager. That idea that a scary book was going to kind of get me right in the heart — I hadn’t bumped into that before, and it was pretty revelatory.”

So revelatory, in fact, that Flanagan pursued writing a script inspired by the book, with the goal of making an independent feature adaptation of The Midnight Club in college —that was, until the book’s publisher threw up a big roadblock in the form of a cease and desist letter.

Good ideas persist, though. And through the years, no one attempted to adapt any of Pike’s extensive library of 80 books to television or film. Opportunity struck during the post production phase of Doctor Sleep, Flanagan’s big-screen adaptation of Stephen King’s sequel to The Shining.

“We were editing Doctor Sleep, and I was poking around on Facebook,” he said. “I just had this idea of like, I wonder if there’s a fan group. I checked and there was, and he was answering the fans personally on Facebook. So, I sent him a message on Facebook and said, ‘I’m a big fan. You may have seen some of the stuff that I’ve done in the last few years, but I’d love to chat with you about adapting The Midnight Club.’”

After a three-hour phone conversation in the editing bay of Doctor Sleep, Flanagan was given the go-ahead to pitch the series to Netflix, which, according to his description, went something like this: “We’ll do The Midnight Club, but the stories the kids tell will be other Christopher Pike books.”

Netflix next optioned a big pile of Christopher Pike’s work — you know, just in case.

2. Making The Midnight Club into an anthology series is the goal. 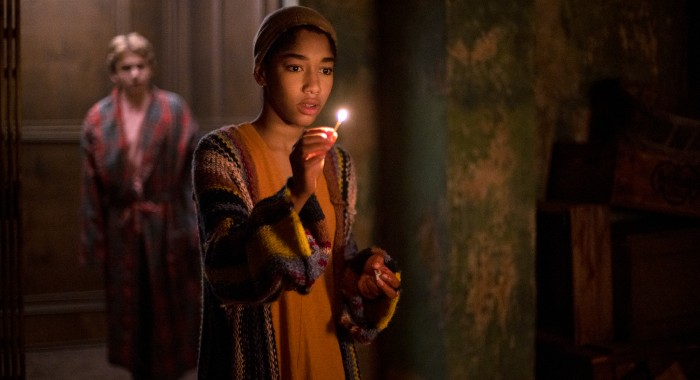 Unlike his other programs on Netflix, which bring their respective storylines to a close when all is said and done, season 1 of The Midnight Club leaves things open-ended. That’s by design, Flanagan revealed.

“This was designed to be ongoing,” he continued. “I don’t know if it will be. We’ll see what Netflix wants to do, but this was very much designed to continue. Pike has 80 books. So we have we have a lot of incredible material to pull from.We also didn’t answer some of the bigger questions of the season. Those answers exist, but were meant to be for the next season.”

3. Each character’s B-story is based on a different Christopher Pike book. 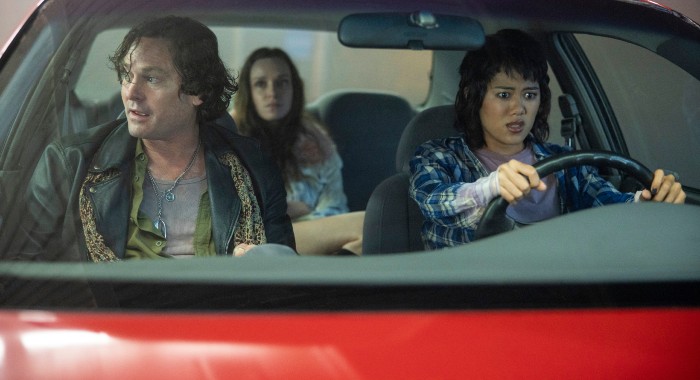 As Mike mentioned, other Christopher Pike books are included in the series and they show up as the ghost stories the kids tell each other while in hospice. He refers to these tales as “B stories” and the inclusion of them in the series involved some deep research and character development.

“We very much wanted there to be a reason that each of these stories were there,” he said. “It was something the character was working through. [It also] had to motivate the story. It had to either show us a window into something they’re having a hard time articulating with the audience, or it had to help drive their arc forward. We had to see them work through something in their story that they were trying to work through in real life but having a difficult time doing so.”

Accomplishing this was no easy task. Remember, there are 80 books in Pike’s arsenal. So, as Flanagan revealed, “We divided them up among the writers and everybody had to read their chunk of books. We spent the first two weeks in the writers room giving book reports to each other, like we were in school. We needed to be familiar with everything, and no one had time to read everything, or we never would have finished the scripts that have gotten started. So we had this really exciting experience where each writer would come up at the start of the day shift, and give us a full tour of the story.”

Going through these book reports didn’t just help flesh out the structure of the series, they helped to develop the characters, as well.

4. The series has a cast of newbies, including one unconventional surprise. 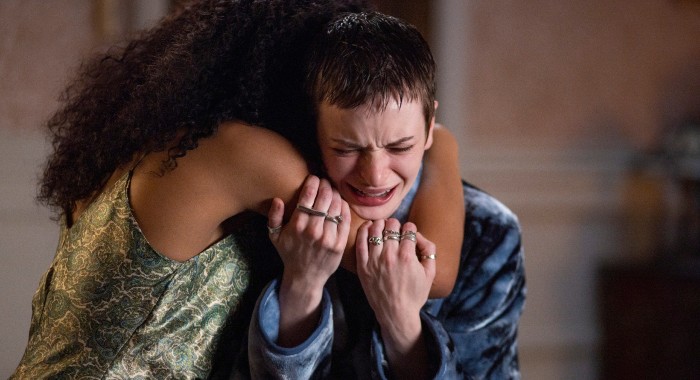 Mike Flanagan is known for working with a familiar ensemble of actors on his projects. While The Midnight Club does boast some recognizable faces, the co-creator of the series said this time around, the casting process was quite involved and spanned six different countries. The result is a cast of talented young actors, many of whom without noteworthy credits, making their small-screen debut.

As he pointed out, sometimes you find talent in the most unexpected places. Take Ruth Codd, for instance, who plays the wheelchair-bound Anya in the series. After an exhausting casting search, it took a random trip on social media of all places for the casting person to discover her.

“We found Ruth Codd because she was on TikTok,” Flanagan said. The show’s casting associate reached out to Codd through direct message asking if she ever thought about professional acting.

Flanagan continued: “Ruth being Ruth — who is one of the coolest people I’ve ever met in my life — she was like, Yeah, sure. She sent in an audition and it eclipsed everybody else.”

5. The Flanaverse Easter eggs are there, but they’re hard to spot. 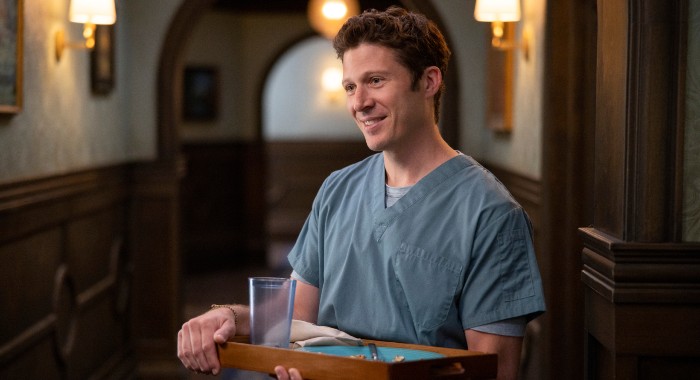 Since his movie Oculus hit the big screen in 2014, Flanagan has included the Lasser Glass (aka that spooky mirror from the movie) in everything he has done. Sometimes it appears in obvious places, and other times the hunt for the mirror is a bit more challenging. Well, it is definitely in The Midnight Club but as he admitted to the room, the Easter eggs are there but require some extra attention to discover.

“There are some cameos in the show that are really fun and really hard to find,” he said. “But if you keep your eyes peeled, or your ears peeled, you can find Hamish Linklater, Carla Gugino, and Kate Siegel on the show.”

As for other fun tidbits, he teased some clever turns of phrase and a couple nods to The Fall of the House of Usher, his highly-anticipated Netflix adaptation of Edgar Allen Poe’s work. 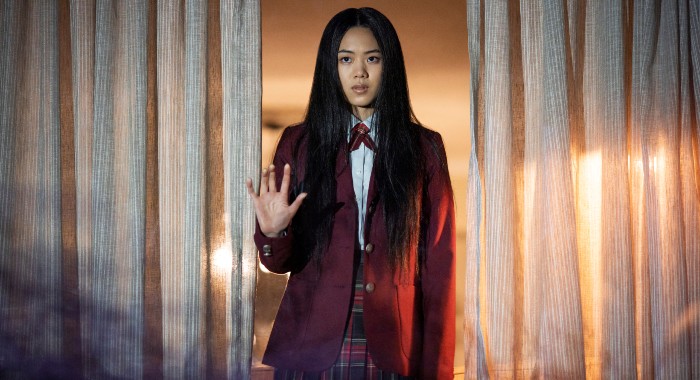 One thing you should know about Mike Flanagan is that he hates jump scares. With a passion. And now, thanks to the addition of a cavalcade of them in the show’s first episode, he is now a Guinness World Record holder for putting the most amount of jump scares in a single episode of television, ever.

“My whole career, people have been like, Put more jump scares in. And do them faster!,” he explained. “I hate them because I feel like it’s very easy to walk up behind somebody and smash things. But the notes were already coming in: Time to do jump scares! And so, I thought, we’re going to do all of them at once. And then if we do it right, a jump scare will be rendered meaningless for the rest of the series. And we’ll just destroy it and kill it finally, till it’s dead.”

All the jump scares, all at once is exactly what happened. He even involved a black cat being tossed into the mix, just to add a fun cliche bow on top of it all. Walking away from the experience, he was convinced the jump scare was forever deemed meaningless.

Flanagan continued: “They were like, Great! So, for my whole career, I’ve completely just shat on jump scares as a concept, and now it is pinned to me as much as it is to the show and to Netflix and all of us who have inflicted this on everyone. Now, I have my name in the Guinness Book of World Records for jump scares which means next time I get the note, I can say, As the current world record holder in jump scares, I can tell you I don’t think we need one here.”

7. It brings ‘horror royalty’ Heather Langenkamp back to acting. 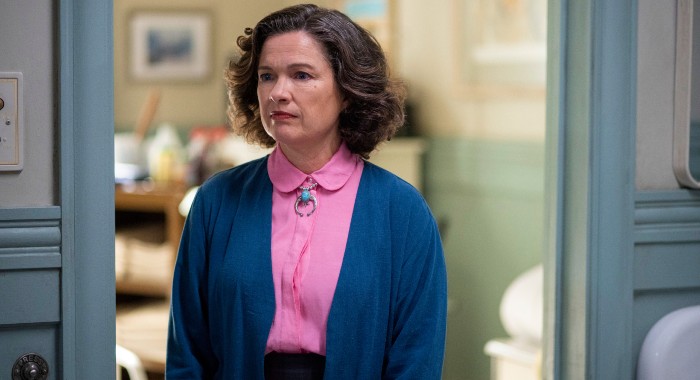 “To me, Heather is royalty,” Flanagan admitted. “We had just begun talking about candidates for Dr. Stan. And I think the conversation was, We haven’t seen Heather Langenkamp in a really long time. And we didn’t send it to anyone else. She was the first person we approached on it.”

Since disappearing from the public eye, Langenkamp went into the special effects makeup industry and currently runs AFX Studio with her husband, David. The company has worked on everything from The Crow to American Horror Story. But that didn’t stop her from recognizing a good opportunity to break her acting hiatus.

“She got back right away, and sent in a tape within a few hours,” he said. “And we got the offer out, I think, that night. She was cast the next day. That’s one of the fastest casting processes I’ve ever had.”