How Mystery Men Planted the Seeds for the MCU Template

On its 20th anniversary, we look back at how the goofy superhero comedy unknowingly paved the way for the future and why it remains so memorable.

Although the opening shot of 1999’s Mystery Men is pure DC Cinematic Universe – the strange semi-futuristic cityscape that echoes Tim Burton’s Batman, the worshipful but also terrifying statue of local hero Captain Amazing that feels straight out of Zack Snyder’s world – what follows actually lays out a template for what would eventually be Marvel’s complete and utter dominance in the superhero movie space.

Two movies that were released just prior to Mystery Men – Blade in 1998 and The Matrix in March 1999 – are most often credited with kickstarting the comic book movie revival. The Wachowskis’ anime-inspired sci-fi blockbuster showed how super-powered action could and should look, while Wesley Snipes’ vampire crusader proved you could find success beyond Marvel’s A-list roster. But looking back, neither of those films really fit tonally with what the MCU would become. The real seeds were planted in a silly and underrated Ben Stiller comedy that celebrates its 20th birthday on August 6. Here’s how. 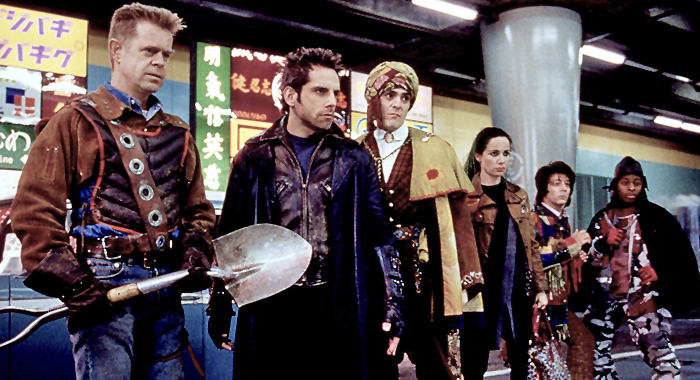 One of the hallmarks of Marvel movies is that they are littered with big and unexpected names, from Gwyneth Paltrow in Iron Man to Robert Redford in Captain America: The Winter Soldier to Matt Damon in Thor: Ragnarok. For a superhero goof, Mystery Men shared similar out-of-the-box thinking, resulting in even the smaller roles being surprisingly memorable. The main team was comprised of an Avengers-level mix of mid- to late-’90s indie and comedy stars, including Stiller, Janeane Garofalo, William H. Macy, Hank Azaria, and Paul Reubens; the main villain was a supremely hammy Oscar-winner Geoffrey Rush, and the periphery was dotted with “whoa, really” names like Eddie Izzard, Ricky Jay, Cee-Lo Green, Dane Cook, and Tom Waits. Superhero movies had come a long way from a time when they were the last refuge of stuntmen and up-and-comers, and Mystery Men took the baton from Tim Burton (who went way outside the box with Michael Keaton in Batman) and ran with it for a bit before Marvel took over. 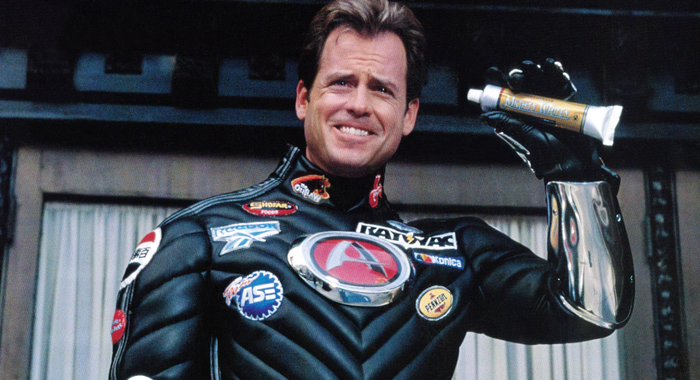 Although Iron Man and Captain America: The First Avenger hit some of the expected story points, by and large Marvel got away from doing traditional origin stories. Rather than having each new hero start off in a blank slate world where they’re the only ones with superpowers, Marvel built a world where multiple heroes and villains existed in various points throughout history. Mystery Men, too, drops you right into the thick of it with a superteam fighting supervillains in a city that is so comfortable with its own Superman that he has corporate sponsors.

There is a sequence about midway through the movie in which the Mystery Men hold open tryouts (a gag that would be recycled in Deadpool 2), and they are swarmed with wannabes. This is a world as used to seeing this sort of thing as the people of MCU New York are to seeing Spider-Man. 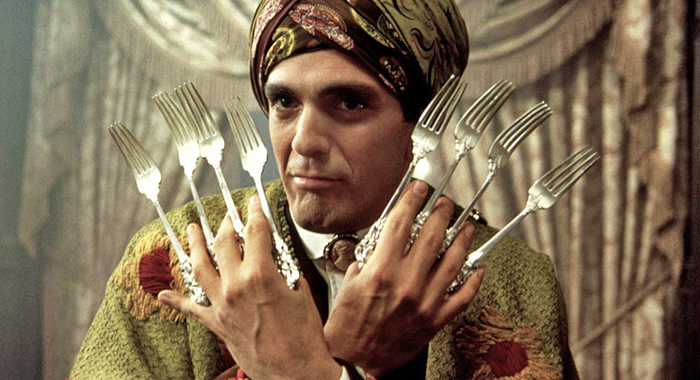 Naturally, Mystery Men was never intended to be anything but a superhero spoof. But its willingness to embrace the core silliness of the superhero concept helped show Marvel how to overcome a major obstacle. The knock against the DC movies is that they are dark, plodding, largely humorless affairs. And if you start to take the idea of people in fancy suits flying around cities too seriously, the whole thing begins to falls apart. The self-awareness to know that humor makes comic book storytelling go down a lot easier fuels Marvel even at its darkest. Avengers: Infinity War or Avengers: Endgame would have been too much to take without the relief supplied by Dr. Strange and Tony Stark’s catty bickering, or Korg’s epic Fornite battle against Noobmaster69. 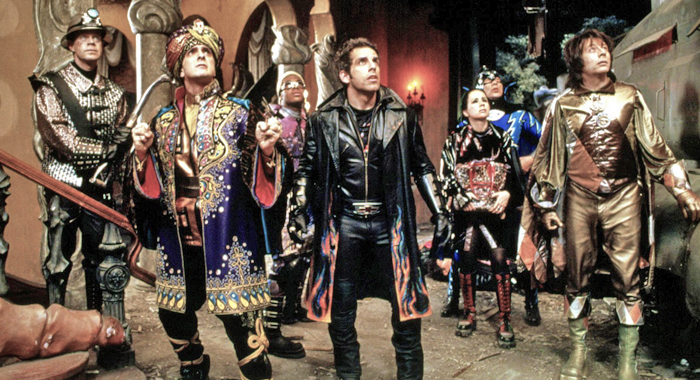 And speaking of the bickering… A team of noble heroes who all share an unshakable respect for one another, and who treat each other with courtesy and dignity at all times… is boring. Like Mystery Men, Marvel understands that teams like the Avengers or the Guardians of the Galaxy thrive when they don’t get along. Likewise, the Mystery Men treat each other more like co-workers than real friends. Post-battle, they sit in diners and complain like they just clocked out of a factory job (and coincidentally, the original Avengers ends with… the team sitting around in a diner eating).

The (Lack of) Secret Identities 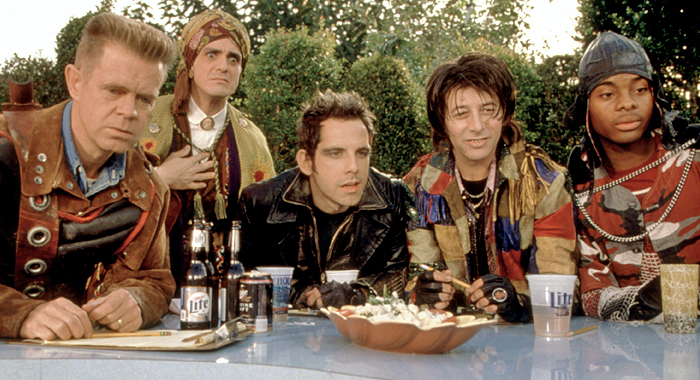 This is an extension of the world-building idea, but it’s no coincidence that Marvel ditched the concept of “secret identities” as soon as it could. It’s a hindrance more than it is a help – watch how they bend over backwards to get Tony Stark fighting helmetless, or how many times Captain America takes his mask off so you can see his face. Mystery Men doesn’t even bother with masking its heroes. They exist in a world that’s gotten used to the idea of superheroes, just as the MCU seems to be pretty OK with one of the world’s most successful tech billionaires occasionally running off to fight Thanos, and where kids think nothing of asking Hulk for a selfie. 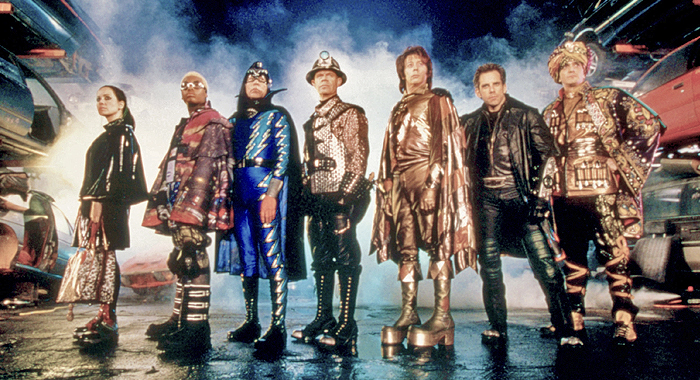 In the end, though, Mystery Men still allows its crew of misfit heroes to have their moment. They’ve been the butt of the joke for most of the movie’s runtime, but they’re ultimately still allowed to be heroic and win the day. There’s just enough earnestness there to get away with it – had the movie gone more cynical, it would have piled on the jokes regardless of whether or not anyone saved anything. It’s a delicate balance, and a Marvel entry like Thor: Ragnarok actually feels right in line with it. It never quite tips completely over into out-and-out Thor parody, though it comes close. But Marvel had, by that point, settled so comfortably into a tone that both celebrates and pokes fun at the concept of superheroes that it all managed to work.

And who would have thought it would be the Mystery Men who’d light the way?

Mystery Men was released in theaters on August 6, 1999. 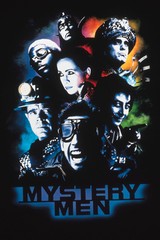