How Home For the Holidays Saved My So-Called Teenage Life

Robert Downey Jr.'s charming and self-assured Uncle Tommy in this treasure of a Thanksgiving flick helped actor and director Ryan Spahn find peace in his teenage self. 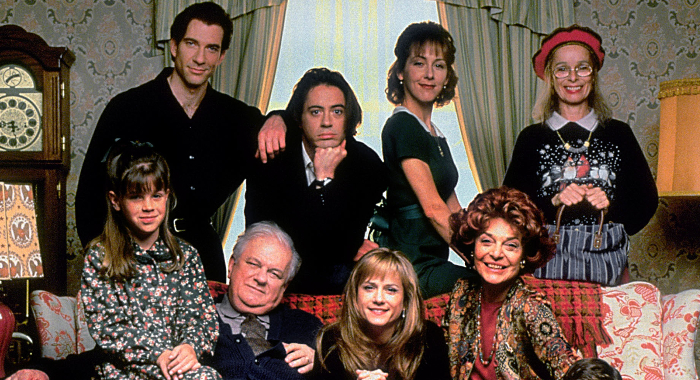 Ryan Spahn is a New York City-based actor, writer, and director. His next feature film is Nora Highland, which was shot during the COVID-19 pandemic and explores the issue of casting straight actors as LGBTQ+ characters in the theater. Here he reflects on seminal Thanksgiving movie, Home for the Holidays.

TV series My So-Called Life ended prematurely on January 26, 1995, and my 14-year-old life ended as well. Full stop. I stalked the halls of my public high school, clutching the tattered ends of my flannel. I cowered in the shadows of the parking lot, inhaling Camel Lights like it was my damn job. I would never see the character of Angela Chase ever again. Ahhh! I was an outlier. She was my best friend. My happiness depended on her staying alive. What was I gonna do?

Distraught beyond teenage comprehension, I buried myself in my Entertainment Weekly. What was my red-haired, Manic-Panic-dyed Angela Chase/Claire Danes going to be in next? I had to know. My life depended on it. The Spring issue of the magazine spoke of a new film she was starring in; it was hitting cinemas in the Fall. It was going to be PG-13. I would then be 15, which meant I could go alone. Booyah! 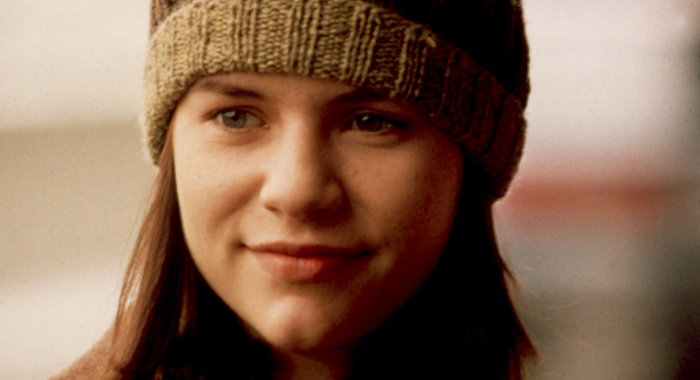 The blurb said something like, “Home for the Holidays is about a Thanksgiving gone awry.” Sweet! Coming from a broken home, family holidays were always these harrowing battlegrounds; a painful tightrope test of love, and – most importantly – loyalty. I was legit dying for this movie to open. I knew it would be my jam.

Home for the Holidays came out nine months later, on November 3rd, 1995. The film was directed by Oscar winner Jodie Foster. In addition to starring Angela Chase, the movie also had Oscar winners Holly Hunter and Anne Bancroft in it. (I mention the Oscars because I was profoundly obsessed with the Academy Awards.) I hadn’t heard of anyone else in the cast.

Alone in the theater with a small popcorn and a rackety bag of Sour Patch Kids, my imagination was totally game-on. The lights dimmed. Here we go. Angela-Chase-as-Claire-Danes-as-Kitt-Larson was one of the first characters to arrive on screen. I gasped. My best friend was back. Gosh, I’d missed her. But then, something unexpected happened… 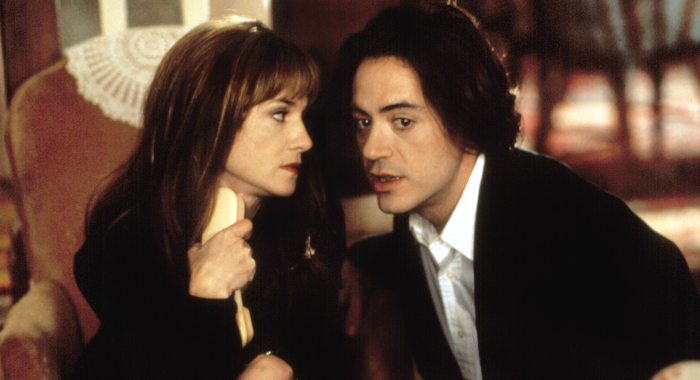 Full disclosure: I was a budding gay boy. I just didn’t know it yet. You see, living in the suburbs of Detroit, I had never even met a gay person. There was a queer kid in My So-Called Life, but back in January, I wasn’t ready to see myself reflected in him. But now, it’s November – things changed. Enter the character of Tommy Larson, uncle to my beloved Angela Chase.

Tommy was gay and he was just… huh… he was just living his life. Walking around. Being gay. Being funny. Being even, like, a role model. And he was not dying of AIDS. But I thought all gay people died of AIDS – that’s what the movies had told me, right? This guy was totally alive, and – shut the front door – he was totally married. To a man. I didn’t even know that was a thing. My family certainly hadn’t brought that pearl up while hurling a Thanksgiving turkey across the dinner table. (Yes, that happened. In my real life. Not unlike what happened in the film.) 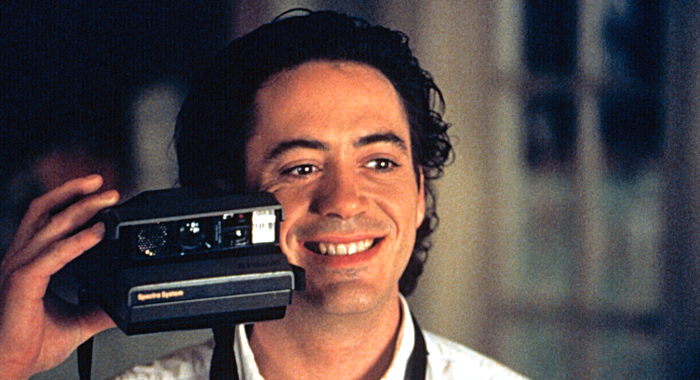 His marriage was actually a movie plot point that I should fill you in on: Uncle Tommy is played by scene-stealer Robert Downey Jr. An actor I’d never seen before. And his family isn’t totally on-board with his gayness, so he keeps his recent beachfront marriage on the down-low. Okay, so, after Thanksgiving dinner is done, after the tipsy Great Aunt Glady (Geraldine Chaplin) confesses her love for her brother-in-law (Charles Durning), after Uncle Tommy’s sister Joanne (Cynthia Stevenson) is showered in turkey gizzards, the now profoundly upset Joanne decides to blast-out Uncle Tommy’s personal life: “You’re calling me a drama queen! Mr. Pervert! Let’s talk about secrets! May you and your husband live happily ever after, Mrs. Gordon!”

I dropped my Sour Patch Kids. He was exposed – my worst nightmare. He had no armor. If that happened to me, I wouldn’t have the vocab to combat. But then, with effortless aplomb and profound confidence, Uncle Tommy shrugs off what would have shattered me: “Dessert looks pretty good,” he says with a wry smile. 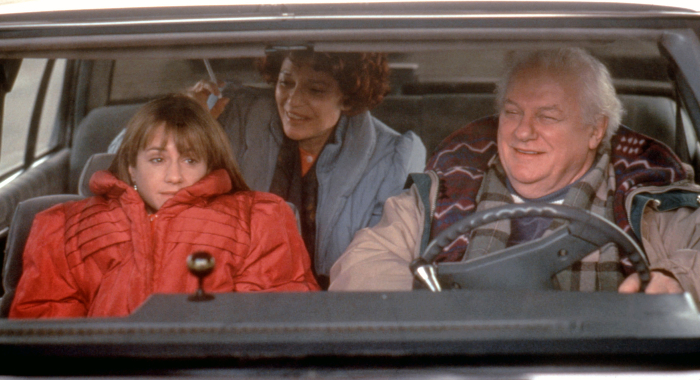 He could give a f–k what his sister thought. What anyone thought. I realized then that my own happiness was a personal decision I could make. My family didn’t have control over it. I had assumed they had. Feverishly smoking my Camel Lights, I waited in the movie theater parking lot for mom to pick me up. I doused myself in my Drakkar Noir. I chomped on my Big Red gum. How was I gonna be happy like Uncle Tommy?

Mom arrived in her white minivan. We drove in silence. I was silent for days – at least, that’s how I remember it. How was I gonna be happy like Uncle Tommy? But then, one night, I bolted up in bed. I knew what I had to do. I had to leave. I had to get out. But how? I know! A boarding school! Interlochen Arts Academy is in my state. I secretly applied and I secretly got in. On a late submission. I raised the tuition money. By myself. Against unrelenting pushback from my family, I declared my departure. 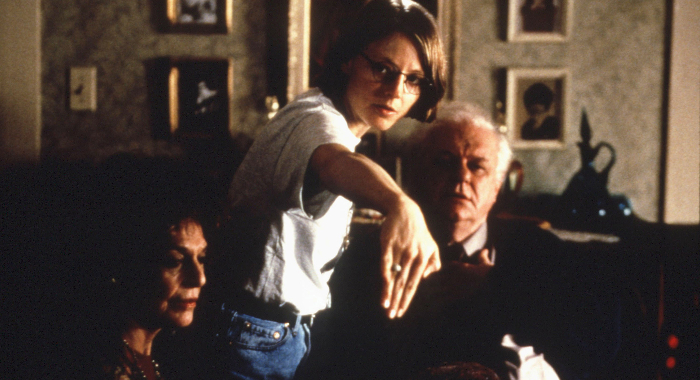 Upon arrival at Interlochen, I entered the boy’s dormitory. I took a deep breath. Then, I noticed a quiet sophomore named Conrad standing in front of the mailboxes. He was from Amman, Jordan. He was a drama major. He was cute. He became my first boyfriend. He became my first love. He became my gateway to being happy. Just like Uncle Tommy.

It took me six years to finally come out to my family, which proved to be its own nightmare. To this day, I cling to Home for the Holidays annually. It’s my reminder that no family is perfect. We’re all just doing our best. As Claudia Larson (Holly Hunter) so perfectly states, “We don’t have to like each other. We’re family.”

As Thanksgiving rolls around, I look forward to my return to the Larsons. Because if it wasn’t for them, for Home for the Holidays, for Angela Chase, for the timing of Uncle Tommy in my life, I would’ve – quite literally – never survived high school. Full stop.

Home for the Holidays was released November 3, 1995.