“What's the superhero origin story if Professor X never shows up at your house?” Sophia Lillis, her costars, and the series creators attempt to answer the question.

At first glance, I Am Not Okay With This may not seem like the most natural adaption from comic books to Netflix series. Charles Forsman’s graphic novel is filled with dysfunctional people failing to relate to one another. It is written from perspective of one teenage girl, Sydney, who uses a journal — after it is forced upon her — to come to terms with various teenage problems and her emerging superpowers. And her voice, like many other teenage journalists, makes the world (and her place in it) feel irredeemable.

As star Sophia Lillis, who plays Sydney on the series, put it when Rotten Tomatoes talked to her about the show, the graphic novel has “this sort of ‘oppressive’ feeling.” That is to say, the character’s dark thoughts dominate the story and send it on a very specific trajectory.

The character’s fatalist tone is one of the book’s great strengths, but also a challenge when adapting the series. Executive producer Christy Hall felt she wanted to honor the “delicious melancholy” of the novel, but also felt it was important to build beyond the material.

“[Forsman’s] beautiful imagination became this really great invitation to find ways of honoring the world [and] the characters he created,” Hall said. “But then also to not be afraid to truly develop the piece further into an actual TV show.” 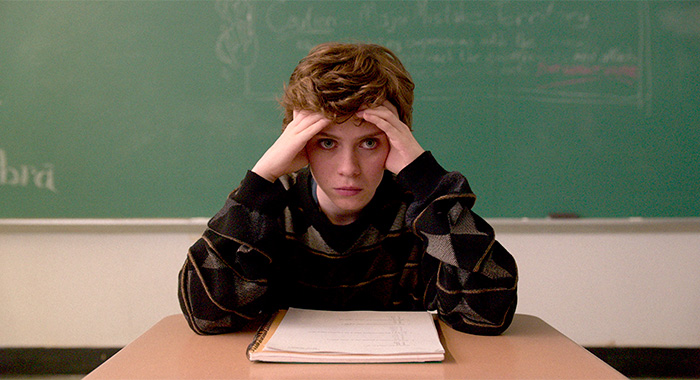 One key way the series accomplished that was to take Sydney’s writing not as the absolute truth it seems to be the novel. “It starts off in Sydney’s head,” Lillis explained. “But you can slowly see how other people are thinking. It can’t just be about Sydney once things start happening, so you get to see more of their stories.”

That push-and-pull between the way Sydney expresses her viewpoint in the journal and the way the world occurs to others became an aspect of the story Hall and fellow executive producer Jonathan Entwistle zeroed in on while developing the series. It is an idea he carried over from The End of the F***ing World, a series also based on a Forsman graphic novel. “[It was] this idea of what the audience sees can be different to what the characters think and what the characters experience,” he explained.

In the case of I Am Not Okay With This, he found Sydney’s journal — and the voiceover used to dramatize it — created a stronger dissonance between what the viewers sees and what the character thinks. “If you’re going to do voiceover, the most compelling way to do it is to see things and hear things that the characters don’t,” he said of deploying the technique in the series. It also suggestions one of the more provocative notions in adapting the novel to the screen: “the person you lie to most is yourself.” 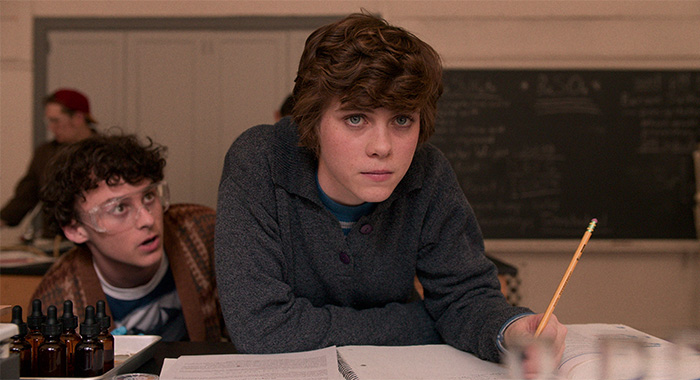 While Lillis would not comment on whether or not Sydney is actively lying to herself about anything, she admitted the character has “a very focused mindset and her priorities are a little mixed up … It’s how teenagers are.”

A veteran of narrating stories in voiceovers from her work on 2019’s Nancy Drew and the Hidden Staircase, Lillis found Sydney’s journal a different sort of experience when it came time to perform the lines in a recording booth. “It’s more of what’s going on in her head, so in the booth, I have to sound a little more like what thoughts would sound like,” she explained. Some of that work included matching the mood of her character in the moment and planning the two aspects of the performance months apart. “It was very different from what I was used to, but that’s what I love about acting — trying different things.”

Beyond creating this added tension within Sydney’s journal and expanding some of the other characters — more on them in a moment — Entwistle and Hall maintained most of the key concepts from the novel, including the structure of Sydney’s family and her home near Pittsburgh, Pennsylvania.

The latter, though described by Sydney in her journal as an ugly place, is shot with awe and beauty by the British-born producer-director.

“Pittsburgh is a very, very specific style of town. The decline of the steel industry, which happened in the mid-’80s, very much left it [troubled]; the towns around Pittsburgh [are] the same,” he explained. “So when you arrive there, there is a natural cinematic quality to the towns, because they are completely timeless. There’s very few contemporary things. There are very few cell phone stores. There’s nothing like that in these towns, so it naturally feels of any era, which is something I think that permeates through the whole show, and it really helps.”

That timelessness lends itself to Entwistle’s own tendency to make set his stories in a nevertime divorced of many modern technologies and conveniences. 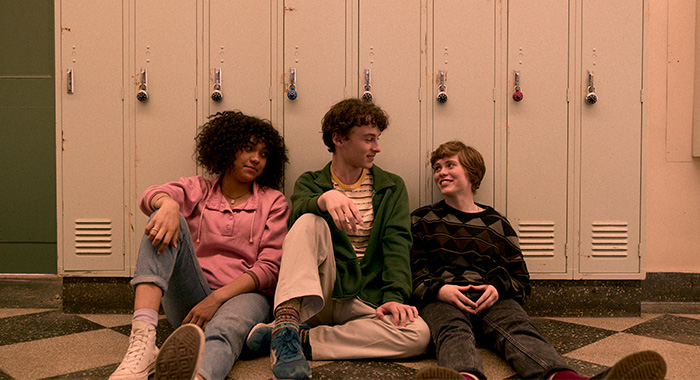 Although, castmates Wyatt Oleff, Sofia Bryant, and Richard Ellis were quick to point out there are at least some references to modern technology. “There’s a moment when Stanley texts Sydney ‘Listen to Bloodwitch,’” Oleff said. Bryant also recalled referring to a text message in one of her scenes, but the ubiquity of cell phones found on other teen programs – and even the graphic novel – is absent here.

“It’s nice when that’s not a giant part of the plotline,” Ellis, who plays nominal antagonist Brad, said. “You can focus more on the interactions of the characters than everything being through a screen.”

“The show is really trying to focus on the things that the people are going through. You can even see that with the superpowers,” added Bryant. “It’s not a show about Sydney becoming this superhero. It’s really about their trials and tribulations of going through high school.”

That deeper exploration led to characters who are not just greatly expanded from their comic book counterparts, but deeply changed. Oleff’s Stanley, for example, may still love pot, but that’s where the similarities end. “I read the script for the show first and didn’t recognize the character [in the novel] at all,” he said. In the book, the character’s only real interests are smoking and selling pot. Additionally, Oleff found him “colder” toward the novel’s version of Sydney. On screen, he makes bold fashion choices, listens to a wide array of records (on vinyl), and supports Sydney well beyond the role of drug dealer. “He’s there to help her and he’s really there to be the best person he can be to her,” he said of the upgraded Stanley.

“He is so richly unadulterated. He’s just so himself,” added Hall. “It’s like it’s the version of me that I wished I’d been in high school as well. It’s just that kind of peeling away of that need to please, and that need to be accepted by way of putting on a false version of yourself that others accept.”

Dina, Sydney’s best friend, also represents one of the more radical departures from the graphic novel. Instead of the nihilistic punk rock girl barely invested in any part of her reality, the television Dina is, as Bryant put it “this cool and fun and confident best friend to Syd.” She also envisions having a life beyond high school and even cares about Brad.

“She’s reliant on Brad [in the book],” she recalled. “But it seems like she hates him.” Like Oleff, it led to some reflection on the character in the scripts and even some puzzlement on how the characters relate to one another. But she came to ultimately understand this alternate Dina. And in building the character up from the dysfunctional version in the novel, Bryant felt the characters also avoids certain pitfalls of the black best friend trope often seen in YA series. “I think with trying to give her more layers in general, it really is us trying to explain and have everyone represented not only by race, but the things they’re going through,” she said. “Yes, Dina is a PoC, but it’s more about how she goes through the things in her life and how the people around her impact her life.” 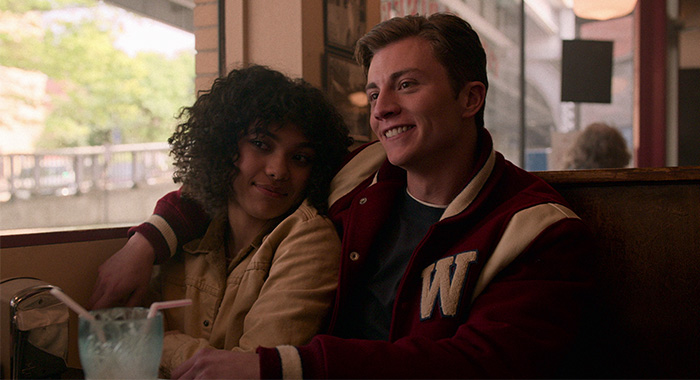 And while Ellis found Brad to be an even more despicable character in the book, he appreciated the chance to play a person with little-to-no filter. “I look at it as a lot more fun than challenging,” he said. “When you can take that pressure off of yourself, you can really be awful and there are no consequences for it. If anything, it’s encouraged to lean into that character trait.” Granted, he and Bryant both agreed there must be something positive Dina sees in him – even if Sydney cannot fathom it. “We only see his worst qualities [though Sydney]. To be someone who is well liked, he has to be charming and funny,” Ellis said.

Reflecting on the way the show still acknowledges Sydney’s perspective, Oleff noted Stanley and Dina are more “fleshed out” people while Brad remains something closer to a caricature.

To Lillis, the way Sydney interacts with Stanley and Bryant’s Dina marks one the best ways the show builds on the foundation of the book. “She has all these people” – mainly Stanley and Dina – “but everything goes wrong and it feels like she has nothing there,” she said. “With the series … There’s so much more to life and so much more happening. It’s less this tense feeling of being stuck.” 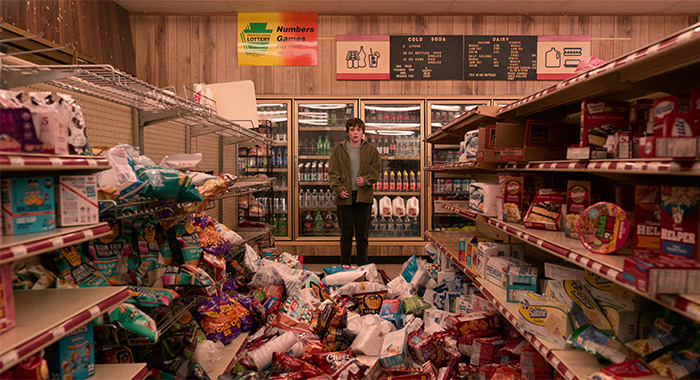 Nevertheless, there is still some sense of being stuck for Sydney. She is an ill-fit at school, she may want Dina to be more than her best friend, and even the powers, awesome as they are, come from a feeling Hall felt was quite recognizable — “If people really knew what was going on inside of me, people really knew what a freak I was, then I would be deemed unlovable.”

“She has no control and has no idea where she is with any of it, and that’s kind of right in the middle of the whirlpool of something that could be considered a depression,” added Entwistle. And while just about every teenage feels like a freak, Sydney’s power genuinely set her apart and create a sense that she could be dangerous – a common feeling for teenagers given a very palpable reality in the show.

That authenticity, both in terms of Sydney’s fears about her powers and her feelings for Dina, were important elements Lillis felt the show had to explore. “Everyone’s process is different, but it’s good to interpret that and show that. It’s what high school life is and what it’s like to grow up and find out who you are. You get to really see that in Sydney,” she said.

Entwistle also felt the coming of age story and the emergence of her powers all lead to a powerful theme about adolescence.  “When you learn to take on the mantle of becoming an adult it also means taking on bad stuff and good stuff, and learning to live with it,” he said.

In finding these themes, expanding the characters, and making one or two other alterations we cannot mention for the sake of spoilers, I Am Not Okay With This becomes an indie rock superhero tale with an interesting hook.

“What’s the superhero origin story if Professor X never shows up at your house or Hagrid never comes to take you to Hogwarts?” is how Entwistle put it.

It is a question both he and Hall hope to answer in subsequent seasons. It also something the cast hope to explore even as they hope to maintain the series’ unique balance of fantastic powers and high school angst.

I Am Not Okay With This is now streaming on Netflix.