Hear Us Out: The Exorcist III Is a Horror Classic In Its Own Right

It may not have any rotating heads or projectile vomit, but William Peter Blatty's follow-up to the groundbreaking original has fantastic performances and one of the greatest jump scares in all of cinema. 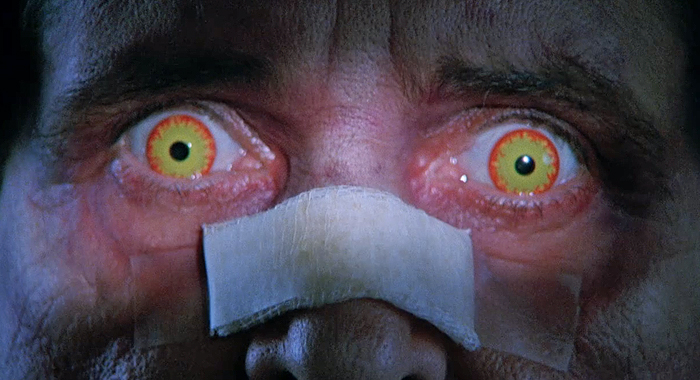 There are few horror sequels that live up to their predecessors, and even fewer third installments that manage to prove their worth. Of the latter, there is one that stands tall and surpasses expectations, despite the fact that the movie that spawned it is widely considered one of the greatest horror movies of all time, not to mention one of the few that was ever nominated for Best Picture at the Oscars.

We’re talking, of course, about The Exorcist III, written and directed by William Peter Blatty (author of the original Exorcist novel and screenplay) and set 17 years after the end of the first film, completely ignoring everything that happened in the famously panned Exorcist II: The Heretic. In contrast to that critical and commercial failure, The Exorcist III successfully pays respect to its originator without drowning in nostalgia and features legendary actors at the top of their game, all while delivering a top notch mystery and quite possibly the best jump scare in horror history.

To celebrate the film’s 30th anniversary, grab your crucifix and comically oversized scissors and hear us out while we explain why The Exorcist III deserves to be held up as a horror classic, just like the original.

IT FEATURES POWERHOUSE PERFORMANCES FROM A LEGENDARY CAST 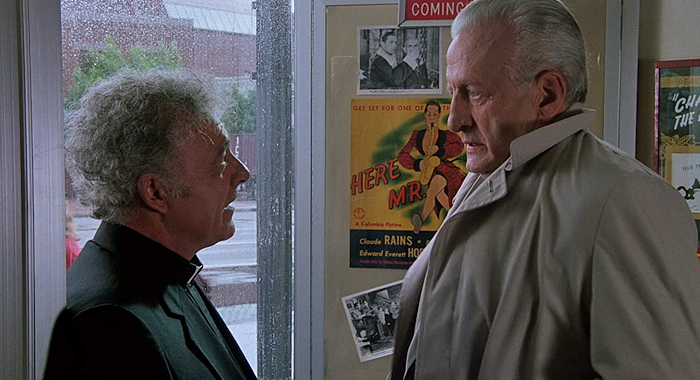 At the center of The Exorcist III is a series of grisly murders eerily similar to the those of a serial killer who died 15 years prior to the events of the film. It’s a surprisingly intimate and grounded plot, considering the franchise’s previous reliance on supernatural phenomena. Our main entry point into this story is Lieutenant William Kinderman, a minor character from the first Exorcist, here played by George C. Scott. Right out of the gate, The Exorcist III places a bigger focus on characters and realistic dialogue than typical horror film conventions.

Scott’s Kinderman spends just as much time thinking about and working on the murders as he does bantering with his good friend, Father Dyer (Ed Flanders). William Peter Blatty’s dialogue feels lived-in and, enhanced by Flanders’ calm and warm delivery and Scott’s perfectly sarcastic, curmudgeonly line readings, makes viewers feel as if they’re eavesdropping on real conversations between old friends. Even as the film’s plot grows increasingly dark and spiritual, the actors make the story feel like part of daily life, as if it all actually happened. 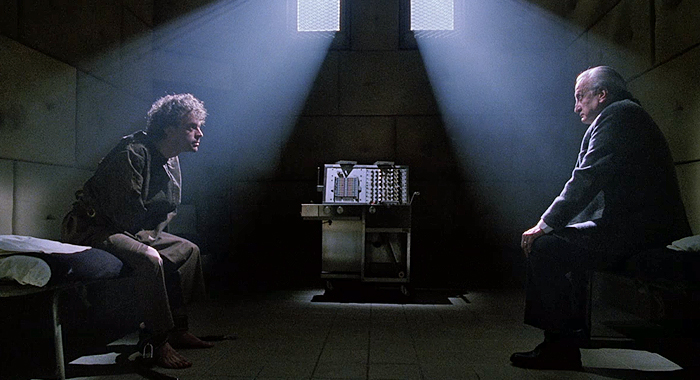 Even when The Exorcist III introduces its villain, who may or may not be the re-animated corpse of a priest possessed by the aforementioned serial killer, the film keeps it grounded by focusing on what’s been said and how it’s said, rather than what actually happens. Brad Dourif conjures up a masterful performance as the so-called Gemini Killer, menacing his way through vile, gnarly monologues a year before Anthony Hopkins enraptured audiences with the same methods in The Silence of the Lambs.

Indeed, the short but crucial time Dourif spends on screen is reminiscent of Hannibal Lecter’s presence in Silence, but Dourif separates his performance from Hopkins by playing more into the violence his character represents. He is nearly lyrical in his voice, transforming from casual and even funny to homicidal in mere seconds. The director’s cut of the film goes even further, offering not one but two uniquely different yet equally enthralling performances by Dourif. While he alternates with Jason Miller, who reprises the Father Karras role from the first Exorcist here, in his scenes from the theatrical cut, really playing into the violence that lurks within Gemini, the director’s cut presents a much more restrained performance that keeps the audience guessing whether they’re seeing an actual serial killer or a mere madman who’s been psychologically affected by a near-death experience.

IT EXPLORES RELIGION AND MORALITY IN AN INCREASINGLY SECULAR WORLD 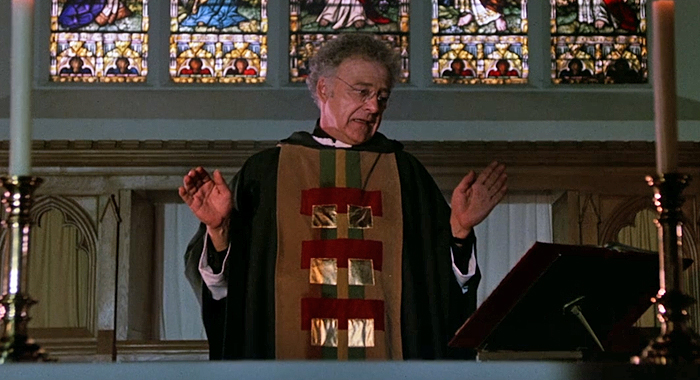 If the first Exorcist was a film about reconnecting with religion in the face of adversity, then The Exorcist III is all about turning one’s back on spirituality, about the way madness becomes an invitation to evil. Indeed, Kinderman spends as much time talking to his friend Dyer about the movies he loves as he does questioning the existence of a loving, Christian God in the face of suffering, disease, and murder.

The film is constantly looking at characters who have experienced severe trauma and who have gone through crises of faith during the events of the first Exorcist, and explores the Catholic guilt they’re struggling with. Kinderman often wonders if he’s done enough — enough to save Father Karras 15 years ago, enough to stop the killings he’s investigating, enough to protect his family and friends.

For most of its runtime, The Exorcist III remains somewhat ambiguous as to whether there’s anything supernatural going on. The director’s cut in particular leaves the question of the Gemini Killer’s identity a secret, and it completely redefines the film’s ending, depending on how you view it. Is this an act of the devil, or simply human evil? To that end, the film’s ending becomes not about embracing religion again, but about a man who — in the face of utter defeat — decides not to wait for a higher power to come down and help him, but to take back control, even if it costs him everything. Evil exists, the movie argues, but it’s up to us to keep that evil at bay, because there may just not be an equal force of good to counteract it.

In a surprising move for a 1990s horror film, The Exorcist III features relatively little gore, and it still manages to be utterly terrifying. The film takes more of a David Fincher-styled approach to horror, using noir tropes and filmmaking sensibilities to manipulate the audience’s imagination and build and maintain tension. The characters in the film discuss every graphic detail of the murder scenes, but we never really see them. In one monologue, the Gemini Killer explains that the human head can still process what it sees for 20 seconds after it’s been decapitated, and he uses that time to show his victims their own lifeless bodies. It’s both horrific and effective, without spilling a drop of blood on screen.

And yet, none of this compares to the single scene that has arguably become more well known than the film itself — the hospital jump scare. Most of the film’s legacy lies with this single scene, which is widely considered one of the best jump scares in history, and for good reason. Throughout the film, Blatty keeps his filmmaking restrained, with few camera movements. He lingers on seemingly inconsequential backgrounds, emphasizing the emptiness surrounding the characters, as he does in this scene, keeping the camera trained on a nondescript hospital hallway. Blatty raises the tension through stillness rather than with sound, making the audience wait just long enough before finally breaking the silence and releasing the tension with a shocking jump scare that works no matter how many times you see it. It’s the same approach that The Conjuring films have employed, only done decades earlier, and it remains one of the most effective scares ever produced.

There are many reasons why The Exorcist is still considered one of the greatest horror films of all time, and there are valid reasons why The Exorcist III doesn’t reach the same heights. But there is no denying the sheer ambition in William Peter Blatty’s film, and the choices he made managed to turn an intimate, small-scale story into a horror classic in its own right. 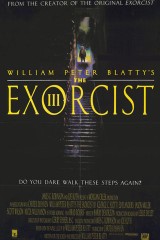