Go behind the scenes with Renner and the series creators to learn how a decade of Clint Barton helped inform the show.

Go behind-the-scenes for a special look at Marvel’s latest entry in Phase Four, Hawkeye on Disney+, as star Jeremy Renner reflects on a decade spent portraying the titular Avenger and the series creators explain how Renner’s commitment to the character helped inform the show. Set after the events of Avengers: Endgame, the series follows Clint Barton (Renner) as he prepares to spend the holidays with his family in New York City. When a vigilante bearing his likeness appears, Clint discovers the person behind the mask is kindred spirit Kate Bishop (Hailee Steinfeld) and teams up with her to face off against a familiar threat from his troubled past. Co-starring Vera Farmiga, Tony Dalton, Brian d’Arcy James, Fra Fee, and Zahn McLarnon, Hawkeye represents the next chapter of the Marvel Cinematic Universe and the introduction of an exciting new hero.

Hawkeye premieres its first two episodes on Disney+ on Wednesday, November 24 and will release new episodes every following Wednesday. 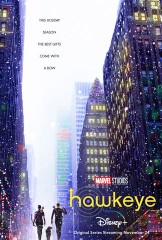